View From The Side: White Lines (Don’t Don’t Do It)
Minute Read

View From The Side: White Lines (Don’t Don’t Do It)

Life can be beautiful.

Life can also be a foetid quagmire of dross, through which we have to trawl, with hope­stained eyes wide open in order to glimpse something shiny or unusual, to momentarily distract us from the encroaching void.

So what do we do? Drugs. Lots of. But this can be a fucking minefield. Thank fuck, at least, that ketamine seems to be finally fucking off. There's only so many times you can watch one of your best mates stare at your general facial area with a mixture of mild terror and non­recognition, as he/she sneezes into your new macbook whilst typing what appears to be an equation that would scare the bejaysis out of Kurt Gödel.

And as the inevitable increments of biological entropy begin to add up, our kidneys, bosses, wives, babies and internal monologues all team up to suggest to us that we can no longer smash in 8 mega­gurners every weekend in some industrial setting, being sweated at by friendly strangers and strange friends. 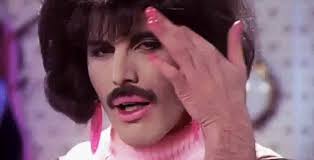 If only they could all be Freddy

Just when the Q­dance crew started upping the game by discovering a tiny legal tweak to one of the major precursors to MDMA, enabling the imagined sky to start raining UPS and Gold Bar nuggets of air­licking fabulousness. So now we all just do coke. And some motherfucker decided that it's all got to cost at least £80 a pop. And if you manage to find some heavily stamped on £40 benzocaine pseudo­gak, then you might as well turn up to your mate's wedding wearing a Poundland t­shirt, and asking everyone if they want to take advantage of the current offer on Tangfastics.

And this is precisely the problem: Drugs, like laughter, on­trend hoodies, recent memes, and perhaps even good old­fashioned talking, are a form of communication. And part of what you're communicating is your aspirational rank in the preposterous hierarchical variety of time­killing naked apes into which we have evolved. So, if you continue to rock up to dinner parties packing either nothing or some albanian nostril adhesive, as I suggested, you might as well pop on your Dominos cap and bumbag and offer to mop the floor.

I exaggerate, of course, but how the fuck can a normal person afford to whap out about £160 quids worth of self­congratulation dust every saturday, sunday and maybe fucking wednesday? Most of the dinners I've been invited to of late have consisted of a brief, minuscule starter of some kind of fusion cuisine that essentially equates to a culinary cockwaggle, just to whet your appetite for the real pissing contest. At 3 in the morning you hear yourself explaining for the third time, in even more minute detail, a situation from half a year ago in which you briefly gave the appearance of being AWESOME. Then all lowered eyes commence oh­so­subtly assessing the depressing gak­lack on the various tiles and plates, before you all shuffle off home to sniff your cunningly secreted final lines and have a virtually pointless and perhaps damaging prolonged power­wank, whilst absent­mindedly considering the existential horrors of your preferred F to the W to the fuckin Ps. Boo fucking hoo. Next time, maybe just agree to not eat anything ever, and all buy some horrific Polish speed for ten fucking quid, and run cackling, like a squadron of enthused goblins, into the night, towards some historical monument to either climb up or be deeply suspicious of.

Some years ago, me and a mate went to Stratford ­on­ Avon, bought some shit pills off the only other person awake on the mean streets of Strat at that time of night, and then proceeded to climb the large statue of Shakespeare in the park, at which point we crushed up the pills on Shakey's bronze head and sniffed them. It was awesome. We did end up getting a lifetime ban from the caravan park we were vaguely inhabiting that weekend, but who gives a fuck? Not me, not my mate, and not the effigy of the disputed author of A Midsummer Night's Dream.

The local swans looked a bit disgruntled and confused, but fuck em. I'd much rather piss off a swan than get a job in the media, join a boy band, or become a fucking estate agent just so I can afford to regularly re­inform my loathsome associates of that time I threw a frisbee really far, or unexpectedly caught a tennis ball or something.

Fuck the lot of it.

I'd rather sit at home by myself chugging pipes of changa whilst watching The fucking Mindy fucking Project. I have done this, and have found it to be a powerful motivator to have a quick think about my life and then get the fucking washing up done. So thank you Shakey, thank you Mindy, because you've reminded me to go visit my Polish mates and then head back to Stratford in a mild disguise, with the intention of swimming naked down the stretch of water where I once saw Tony Hart paddling a canoe containing himself and his little dog that he had dressed up in a miniature sou'wester and matching yellow anorak. Because that will make a fucking cool story for the next ten times I do coke with the scooped­out shells of humanity that I have not yet quite managed to alienate.