View From The Side: Our Home Secretary Backs A Policy From Mein Kampf
Minute Read Post Brexit vote, Ransom Note temporarily gave up on writing about politics. Everything got too weird, too stupid and, quite frankly, too speedy, for us to deal with. But now things are returning to normal, that is, we’re settling back into the merry-go-round of vicious decisions, flagrant extortion and dull corruption that has characterised England since, ooohh, forever- but has been particularly focused since Cameron first got his hammy hands on the keys to Number 10. Strapping on our untarnished righteousness, we feel like we may be ready to plum the depths of our prejudices once more.

There’s a reason we’re eager to wear the skin off our typing fingers, and that reason is simple; tax evading shitwhistle Amber Rudd. Rudd gave her debut speech as Home Secretary at this week’s Tory Conference. It was a typically jolly affair, packed with all the cognitive dissonance and back-of-fag-packet facts that the plebs of Britain (that’s us btw) lap up. My favourite moment of sheer ballsy, I’ll-say-anything-me bullshit came when Rudd dismissed a Labour policy, namely the migrant fund (designed to help communities deal with the impact of immigration), then proposed exactly the same policy rebranded with a spiteful name.

“Jeremy Corbyn wants the government to bring back a migration fund that Gordon Brown introduced.” She intoned, strident. “We don’t need policy from the man who almost bankrupted Britain, and the man who wants to do it all over again… So instead we’re going to set up a new £140m ‘Controlling Migration Fund’ designed specifically to ease the pressures on public services in areas of high migration.”

Genius! This isn’t post-truth politics; this is post-words politics- joyfully unfettering language from the dull anchor of coherence and meaning. I mean, why bother with boring old traditional words at all? We all know the conference would have been equally happy with grunted consonants, a Thatcher slide show, and a couple of piñatas shaped liked immigrants. Bring forth the hammers! Fill the piñatas with blue confetti!

Still, at least at this early point Rudd was repackaging a Corbynite idea that is essentially sensible. For a moment I toyed with the notion that Corbs had taken on Mystique-like shapeshifting powers, disposed of Rudd, and readied himself to deliver a full speech of left wing policies snuck in under utterly misleading titles (note to self- pretty sure I can convince Momentum this actually happened). But it soon transpired that Rudd was taking her cues from a different Labour grandee entirely; Ken ‘Hitler’ Livingstone.

We’ve all been dazzled by Ken’s recent magisterial command of media communications. All he need do is slot a cheeky – yet charmingly irrelevant- reference to Herr Führer into an interview, and he’s set up shop in the news cycle quicker than you can spit arbeit macht frei. It would appear that Amber’s noted Ken’s technique and decided to kick off a Nazi arms race. She’s seen his Hitler and raised him a Mein Kampf.

Laying out a stance to immigration that can be best described as turbo-kipper, she pulled out her big idea; ‘naming and shaming’ British companies that dare to employ Johnny Foreigner. The plan, as The Times later proclaimed, was that “firms must list foreign workers”. Here's that headline, check out how great it feels to read it in stark black & white. 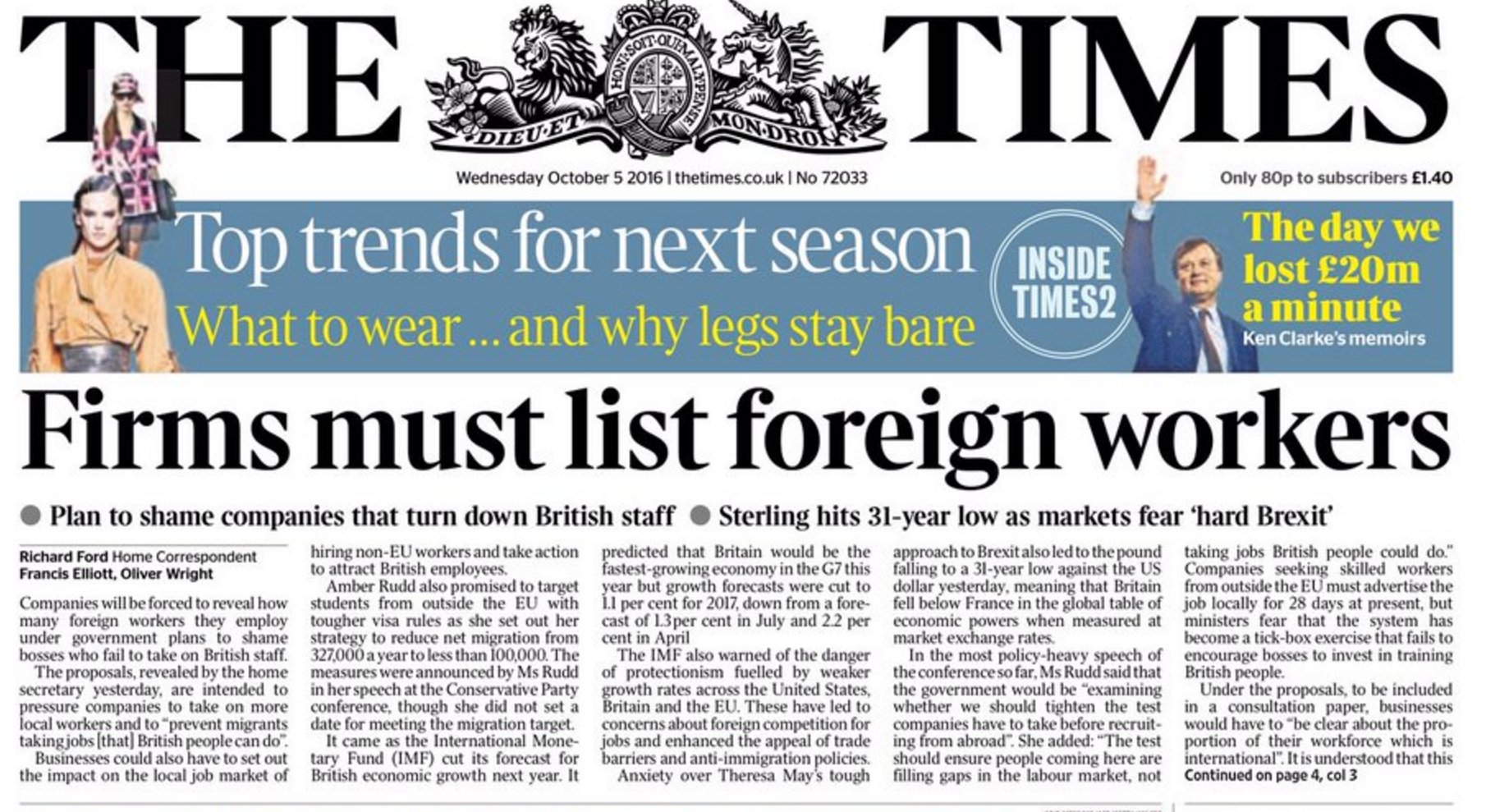 wooo! I also like the bit abut the pound hitting a 31 year low.

If this sounds a bit familiar, it’s because it is – the policy of forcing companies to list foreign workers is a stance dreamt up by Hitler back when he was planning on the best way to exterminate foreigners. As James O’Brien pointed out on his LBC show, ol' one bollock wrote in Mein Kampf that it was "very important that firms declare how much of their workforce is foreign because they're just domiciled in this state simply as earners of their livelihood there. They're not members of the nation, they're not members of the foundation and the support of the nation's existence and greatness.”

Snap! Gwarn Amber, you’ve trumped Ken there! Who’s got the Hitler chat now, eh son?! And it’s worked! Amber’s all over the papers with her suave stab at laying the foundations of a new Third Reich – so much so that perhaps a few more of them might see their way clear to looking into some other details from her past. For example, back in the day (as we say in DJ circles), when Rudd was bleating on at the press about how mean they were being to poor David Cameron about his dad’s rampant tax dodging, she completely forgot to mention that she herself was director of a couple of companies based in tax havens. In fact, it looks a teeensy bit like Amber was explicitly working out ways to spirit cash right from the pocket of those British workers she claims to cherish, to better feather some lovely, gilded nests in the Cayman Islands.

Funnily enough, Theresa May had plenty to say in her conference speech about clamping down on tax dodgers – “There is a responsibility in paying taxes.” She droned, tightening her face and hitting the top emotional output her circuitry permits. “Because their employees – their children are at schools, they use the health service, they use…the goods are transported by roads and trains and so forth. So it's not that companies have no responsibility.” Cripes Amanda! Hide the silver!

So, anyway, Rudd’s reading from the Mein Kampf playbook (and to think of the uproar when John McDonnell pulled out the Little Red Book…) and immigrants are now back to being public enemy number #1. I mean, not that they ever weren’t, but it’s been a while since a Home Secretary has literally suggested a policy Hitler thought up.  So I say let’s bring on this list – fuck it, let’s start with parliament. How about the Foreign Secretary? Boris Johnson was born in America! FOREIGN! GET THE DIRTY FREELOADER OUT! He’s clearly stopping a more qualified Britisher from performing the vital service of travelling the world to insult it. And what of fellow senior Tory Crispin Blunt? Yep, that sneaky poppers snorting bounder was shamelessly born in Germany! Germany! And he supported Brexit! He’s first on the block mate. And by ‘the block’, I mean deported. We don’t start the actual executions of foreign scum until the country has become such a shitty, culturally destitute economic back water that no one in the greater world (or as we now call it, Mordor) even bothers to pay attention, right Amber? Which, when you think about it, is a plan that appears to be going swimmingly;

1) make England so crap that no one cares what we do.

Honestly though, outside the hurly burly of me writing bollocks, our Home Secretary just suggested a Nazi policy – all the worse; I doubt she believes a word of it. She's less some proto-fascist hellbent on ushering in the Third Reich, more a nasty cynic shadow-boxing a fantasy immmigrant menace, its dimensions set by a contemptuous appraisal of the how low the electorate's mindset will sink. This is an attempt to take public rage over very real inequality and redirect it towards phantasms pasted onto all too human forms. Like the majority of our MPs, Amber Rudd has made her fortune from rinsing the movement of capital enabled by a globalised world. And here she is arguing that she wants that world to stop spinning-  for you at least. Don't trust these fuckers for a second.