View From The Side: #Pig Gate
Minute Read Like everyone else in England, we're finding it impossible to do any meaningful work today because, well you know why don't you? Our prime minister has (allegedly) fucked a dead pig. A pig. A dead pig. Dead. Pig. A DEAD PIG. He's fucked a dead pig. Jesus.

In case you missed the original story breaking (doubtful I know), Lord Ashcroft has released an authorised biography of Cameron, with the fine title Call Me Dave. Ashcroft has an axe to grind with Cameron- prior to the Tories’ election into coalition government, he had pumped millions of pounds into the party, all in the belief that Cameron would gift him a sweet job following victory. Once Cameron had formed government with Clegg’s Lib Dems, Clegg (again allegedly) blocked every move to bring Ashcroft in. Eventually Ashcroft (who, lest we forget, pays no tax in the UK), picked up a knighthood, but it was too little too late – he’s been plotting revenge on Call-Me-Dave ever since.

So, to recap; a non-dom billionaire tries – with some success- to buy the British political process. He has no problem openly saying that he’s tried to buy the process. When he only (!) gets a knighthood for his troubles, he chucks his toys out of the pram and decides that Cameron is going to pay. And we haven’t even got to the scandal yet. Ain’t the UK just marvellous? That brings us to this: 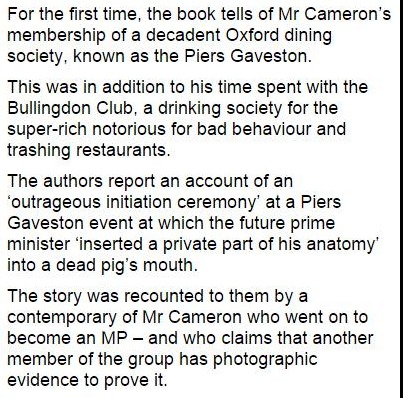 At this stage it doesn't even matter if the story is true or not – the fact is, like a deceased porker with a Tories cock, most people don’t find it that hard to swallow (boom boom). This reflects pretty weirdly on Britain; by and large we have zero problem believing that our aristocrats are psychotic hypocrites who’s idea of university high jinks is banging lifeless livestock – cos, we’ve all done it, right guys? Guys?

Startlingly, this ‘come on, who hasn’t orally raped an expired hog?’ angle is the one numerous right wing journalists have been taking. Having spent the last couple of weeks demolishing Jeremy Corbyn for the crimes of having sex with a woman, imagining that peace might be better than war and being related to someone who was a bit of a cunt in 1867, the press have suddenly found their instinct to forgive.

Lousie Mensch came out with this:

Let's be clear that the story is rubbish, number one. And number two if it isn't, to quote the anti-nowhere league, "So f****** what?"

Hell yeah! Mensch is #TeamPigFuck all day and she don’t care! I bet Samantha Cameron feels exactly the same right now. Being married to a man the majority of the world thinks is a pig fucker must be lush.

Meanwhile plain talking defender of the common man Rupert Myers, journo for GQ and the Telegraph gave an impassioned plea for the defence of youth: 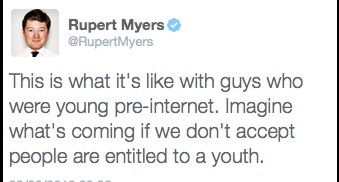 He’s not even denying it! Dude is plain saying, look we were all young once, and when we’re young we do wild crazy things. Things like necrotic bestiality. Amirite? Who hasn’t?! He then went on to prove how great Oxbridge drinking clubs are with this hilarious anecdote:

And it’s at this point you need to remind yourself that these inhuman arseholes actually run the UK.

Cameron is naturally saying nothing, because, well what do you say when the entire world thinks you slipped it to a pig? Personally, I'd like to think this one is gonna run and run. Think back to that moment in school some kid did something so heinous, so stupid or just so icky and weird that it would define all their interactions forevermore. 5 years down the line and they’re still being called Pantshit Peterson. This is where Cameron is now. #PigGate can be forever. With a bit of luck, not a day will go past where he’s not oinked at. And I don’t even know how this is going to play when he’s on any official duties in the Middle East. Can't imagine the Isrealis will be too keen either. And for those journalists suggesting that fucking a dead pig is normal behaviour for a young buck; it isn’t. It really, reallly isn't. Literally no one in the world thinks it’s normal. It's why 'pigfucker' is an insult that works in any language. Getting drunk, puking on yourself, shagging someone inappropriate, making unfortunate political statements: these are all ordinary, regrettable things that happen at college. Pig fucking though? The important thing to remember in all of this though is that whether the pig fucking story is true or not (and let's get real; it probably is), a number of other aspects can't be ignored. Ashcroft details Cameron's cannibis smoking, and alleges that cocaine was taken in his house – and yet the UK drug policy that condemns such acts has ruined, and will continue to ruin millions of lives. On this point as with numerous others Cameron is a brazen hypocrite. And then there's the fact that this whole spat started because Ashcroft had a very real belief that he could buy his way into power. Had Clegg not been around, no doubt he would have.

I'd like to think that these kind of revelations, these tiny glimpse of the of the sordid privilege that lies in the heart of the establishment might help unseat the unsavoury bastards who run this country like an fiefdom of serfs, but then, I just don't know. The nation has taken it from them for so long. It's not just the pig who's been getting fucked. If you don't cover the story someone will cover it for you #piggate @5WrightStuff pic.twitter.com/Fi9RsSFglN

Aaaaannd finally…. the award for getting your shit together quickest goes to…