Stockholm is a city bubbling with life and culture, the Scandinavian city has been a gateway to many a musician and whilst is perhaps not regarded as a cultural capital of electronic music it has more to it than first might meet the eye.

Today marks the release of a new EP by Aksel & Aino, a new wave inspired three track affair which dabbles in the fruitful elements of synth pop and electronica. Released on Public Possession, the fun loving Munich based record label and arts venture, the EP is a flavour of all that is good within the city of Stockholm and now seemed as apt as ever to take a closer look…

Over to the enigmatic duo…

"The place where our paths first crossed was at Eriksdalsskolan at Södermalm. We didn’t know each other yet, but both remember the hillside behind the school. Even though it was strictly forbidden, some of the kids from school went walking in the railway tunnels under a big hospital nearby. We both have memories of darkness and excitement when thinking back on our adventures on the railways inside the mountain. Only sometimes, there was light, hailing from fires lit by homeless people. With our friends we shared blackberries and plums, picked in the small gardens that were strung along the hillside … So close already, still not yet knowing of each other." 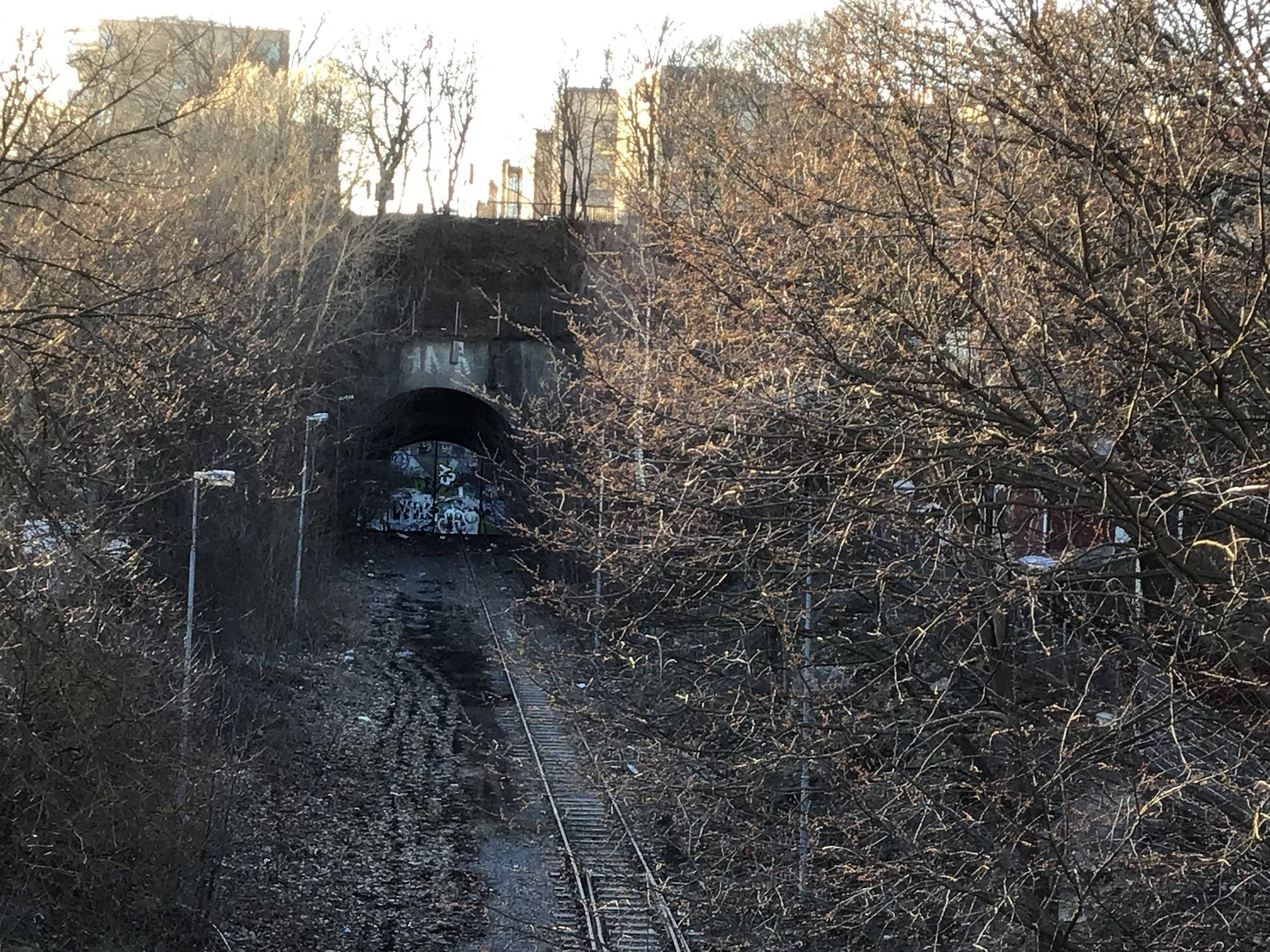 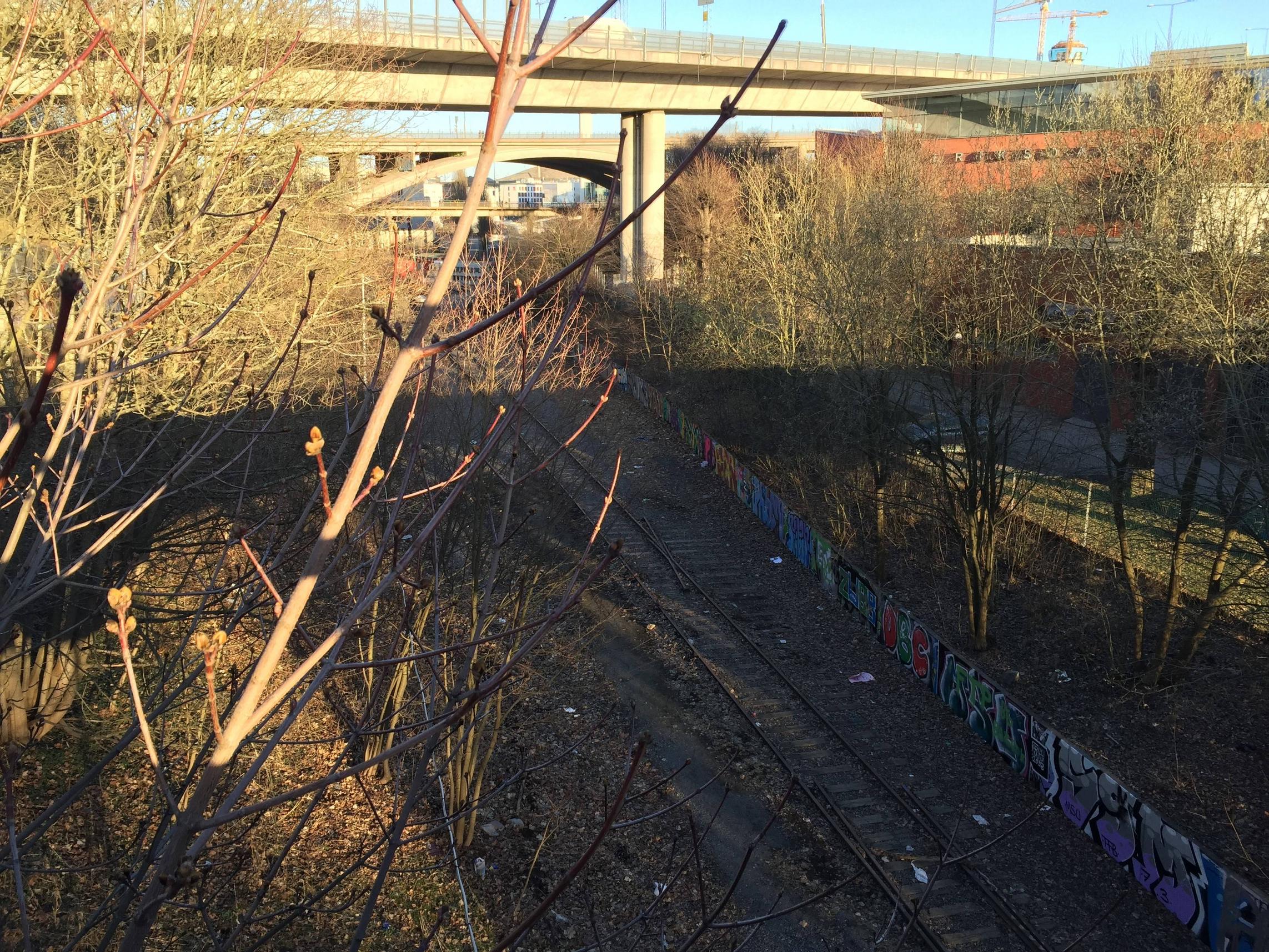 SoFo (South of Folkungatan at Södermalm)

When you get off the tube at Medborgarplatsen you will find SoFo. From Södermannagatan to Renstiernasgatan there are lots of trendy restaurants, cafes and record stores. This district is also home to a lot of unique secondhand stores like Lisa Larsson, Stadsmissionen and Bikupan.

In the beginning of the 90s this was a sleepy part of town, but during the mid nineties a huge Indie-Pop-Wave in Stockholm helped the area around Nytorget to gain new cultural life. Due to that, Berlin Sthlm opened, a popular restaurant and bar. Berlin Sthlm had live music and Dj:s around the 00s. That’s when Aino started performing live with her husband Johan. She remembers the small scene and the feeling of being very close to the audience. It was always extremely crowded and a very familiar spirit with lots of regulars. They had a tiny scene under a small loft. At the loft they had a piano and you had to climb upon a ladder to get in.

In a very short time SoFo became the centre of cultural development and a lot of rich people dared to move to Södermalm. This area has sadly become gentrified in the last decades because of urbanisation.

Vitabergsparken is a big park with lots of nature, surrounding the Sofia church that is looking down on Nytorget and Skånegatan. During summer time a lot of young people relax on the hillsides or use the bushes to make out. The park also hosts the amphitheater, where you can watch the Royal Ballet perform the Swan Lake or listen to a free concert.

This is an important place for both of us.

Aksel has fond memories of being young, joining a community of like-minded people, finding a place in the park to share ideas and dreams. At the same time Aino and her husband Johan, being young parents with their daughter Julia spent many days at the park dreaming of writing and making music. 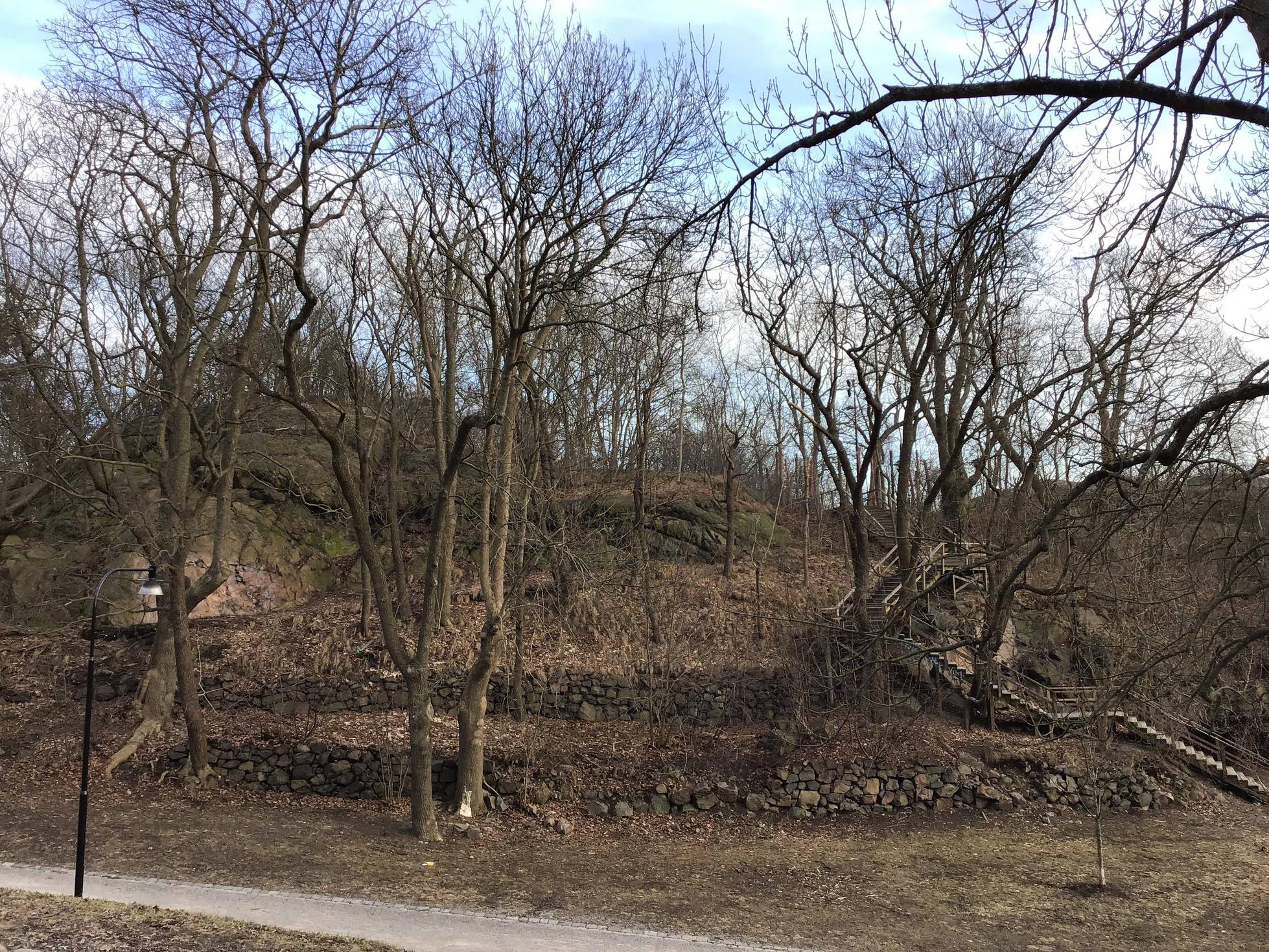 Nytorget is a crowded meeting place in the spring and summertime. The grownups fighting for a place in the sun to drink their coffee, whilst their children are playing, only stopping to have some Italian ice cream at A.H Glassbar. Every year, since the 90s, the community holds a festival with music, flea markets and merry-go rounds. Both of us have nice memories of performing in this park. Aksel played there with a band called “Hans Solo Super Orchestra” in the 90s. 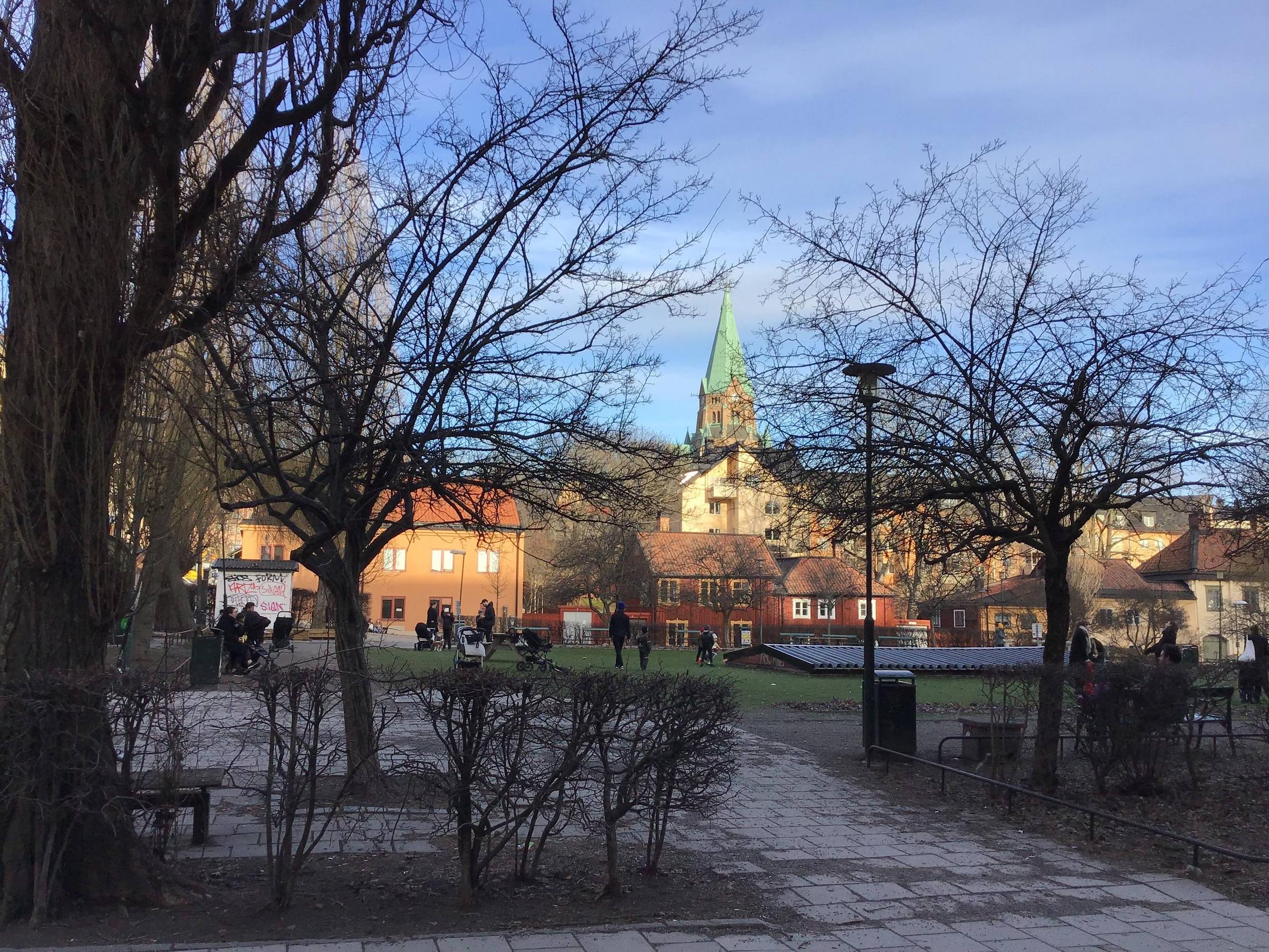 A very popular cafe during the 90s and 00s located in the south side of Södermalm. Young people sat there all day, drinking one coffee, smoking a lot of cigarettes.

The windows were steamed up, making it impossible to see in from the outside. Once you entered the place, you were greeted by odd furniture, including old tables and chairs from the past century. There, in the basement, they hosted events with mainly indie and electronic acts. Aksel had his first gig at String with Hundarna från Söder. He remembers String with joy… the feeling of being surrounded by friends and the smell of cigarettes and alcohol the day after a gig when they came to fetch the instruments. Café String is still a popular meeting-place for young hip kids. 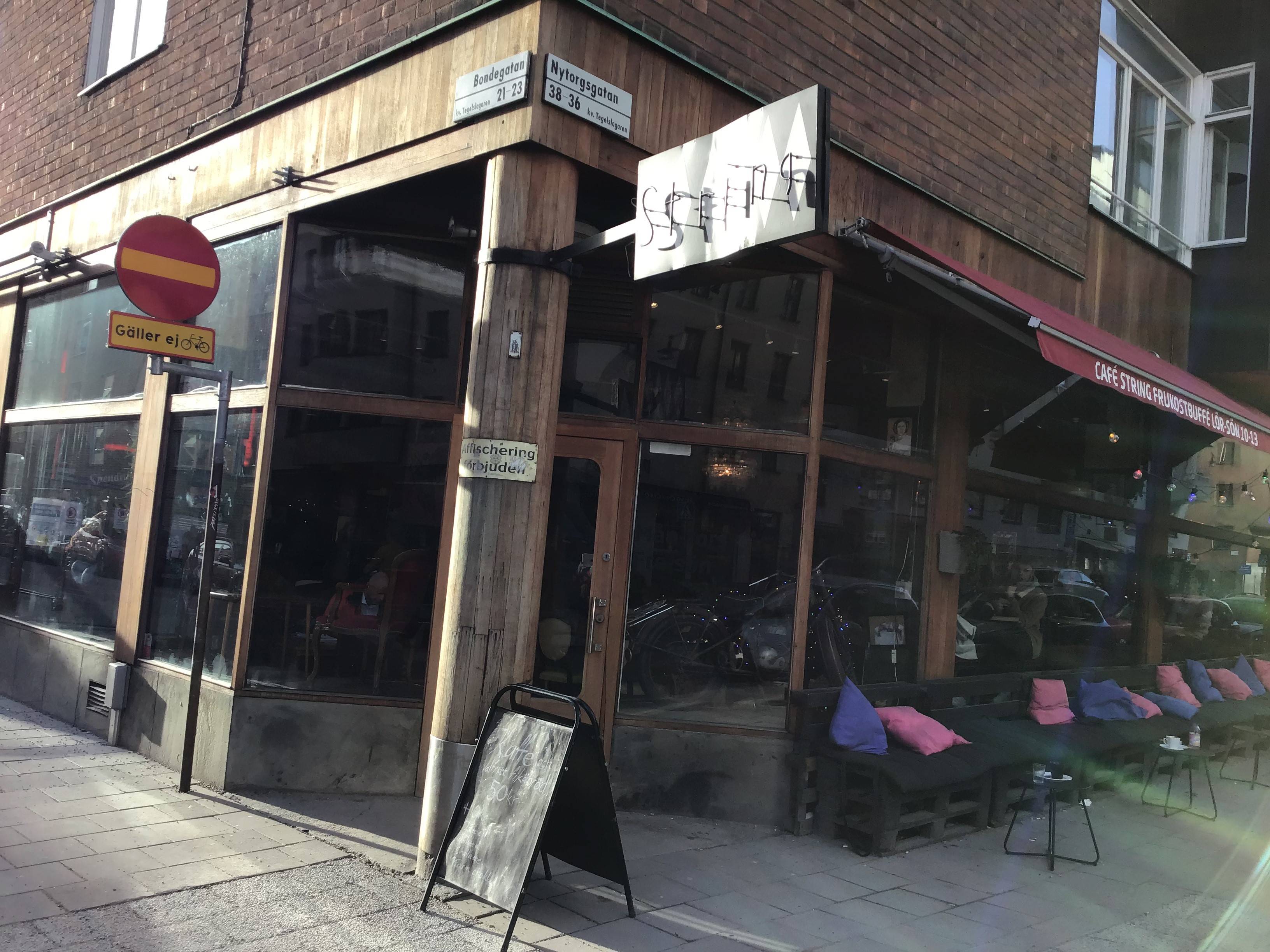 South of Södermalm you find Kärrtorp, a suburb of Stockholm, it’s one of the areas of Stockholm where working- and middle-class people blend together. A lot of artists, painters, musicians and people affiliated to culture live there. Among the apartment houses from the 1950's you can find us sitting outside our studio in the sun, or inside making music. This is our place for creativity and playfulness, where we try to spend as much time as possible. 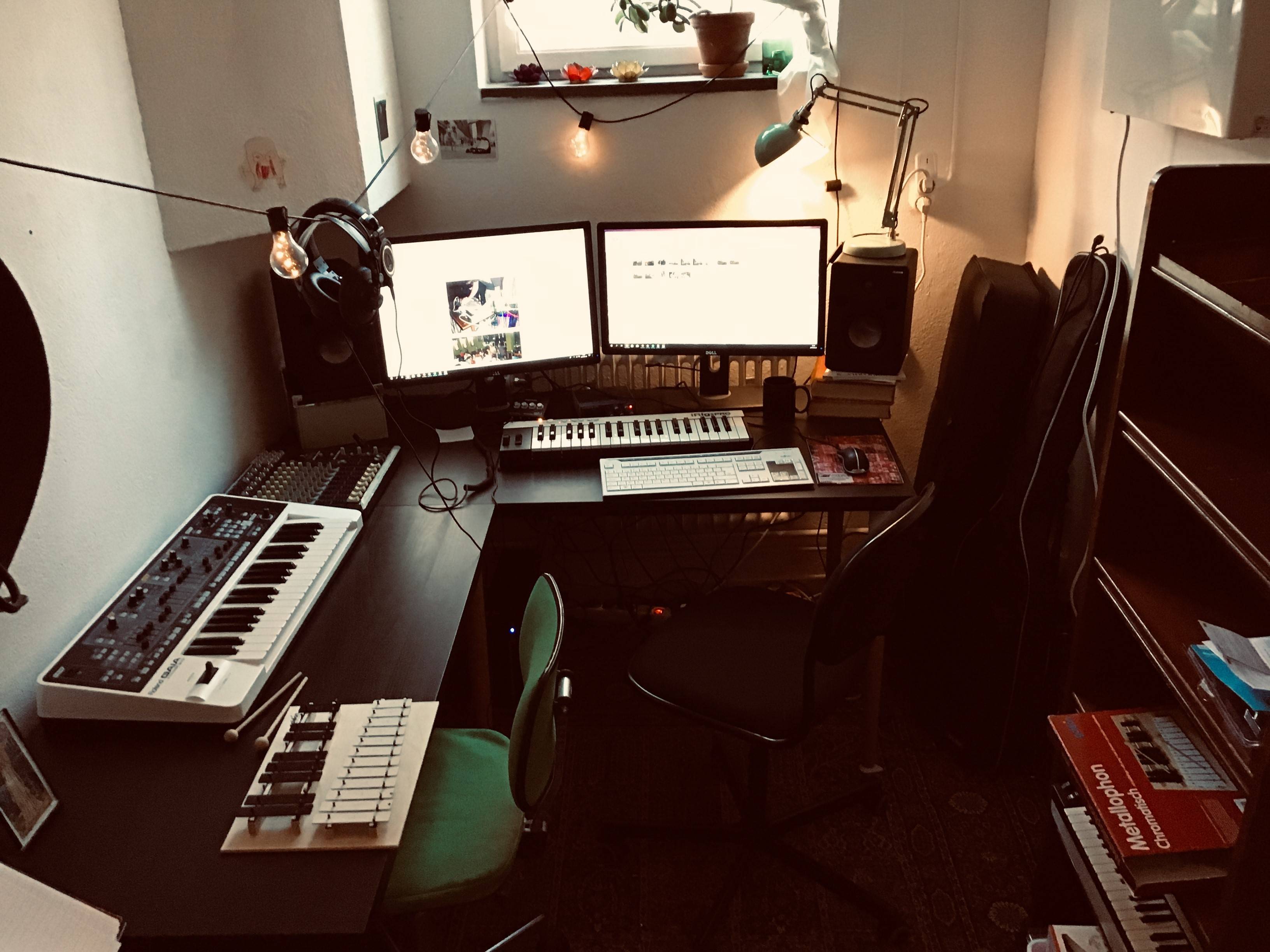