First of all, that rabbi can fuck off. You can defend your community without being such a tosser about it.

Before regaling you with the last couple of weeks of my undercover life on the campaign trail, I’d like to share my annoyance about this.

How can someone say that Jeremy Corbyn is “unfit for office” but then in the very same article go on to say “It is not my place to tell any person how they should vote”?

I mean honestly. You go to a national newspaper right in the middle of an election campaign telling the world that a “new poison” has been “sanctioned from the top” of a party whose leader you describe as unfit, and then you try and run away from it with a load of intellectual pomposity about how you greatly regret having to say anything, and then finally you suggest that it isn’t even your place after all. Call them to account by all means, but don’t piss about trying to pretend you’re some kind of heroic martyr who has just appeared in a political debate by accident.

"What will the result of this election say about the moral compass of our country?,” he continues. I concede it is a fair question on its own, i.e. do you want a party in power who failed to stamp out inequality in their ranks, or do you want one where the leader has referred to women wearing burkas as ‘letterboxes'?

But this ceases to be a fair question when you have already loaded the dice so blatantly against one of the sides. Making inequality so party political is creating a vile debate. We’re in the land of witch burning here. Even though both political parties should be ashamed of their arcane disciplinary procedures and the abhorrent comments of certain MPs; if one angry community shouts more loudly than another and times it for maximum shock value, you have a skewed political narrative, and then what do you get?

Just because this occurs against white guys who run political parties doesn't mean it should be ignored. Politicians are rightly criticised when they prioritise their own parties ahead of what's best for the country, but it seems beyond the pale for commentators to suggest that other people outside of politics might be doing the same thing when they enter the debate. They’re always the good guys, bless them. They couldn’t possibly be putting their own interests ahead of everyone else's. Heaven forfend.

Anyway, to the campaign diary…

Somehow or other, Candidate X had made it to their formal adoption. They still hadn’t clarified those pre-election expenses but it looked like head office could no longer be arsed to chase them. Head office did have rather a lot of other stuff on their plate I suppose.

I was pretty uneasy about things though. Despite the fact a formal adoption serves the purpose of announcing your candidate to the local party and the local media, they are still not beyond deselection. Even in such times of spoof, I was simply astounded at just how many high-profile deselections I’d seen across the country. 23 and counting.

Just when you thought that it couldn’t get any more ridiculous than a candidate suggesting that women "should keep their knickers on” in a conversation about rape live on his own BBC radio show, some goon in Wakefield gets blacklisted for suggesting that Colonel Gadaffi “should surely have fled to Bradford” if he wanted to avoid detection.

And then there was the Cillit Bang incident. 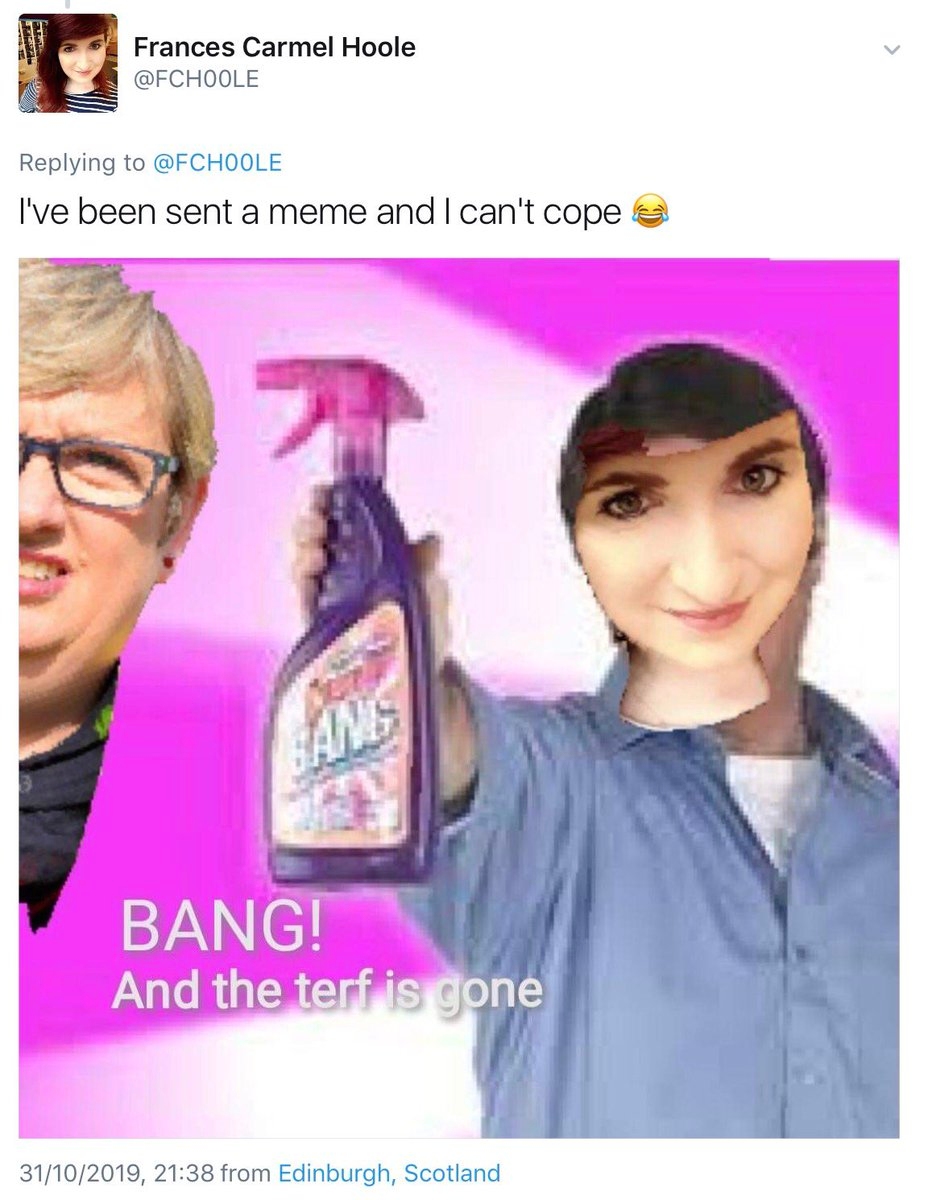 According to the BBC, “Terf is a controversial term which stands for 'trans-exclusionary radical feminist’.” If you’re ever thinking of using the term while pointing a 2-dimensional bottle of Cillit Bang towards your political opponent on Twitter, you can be sure that Scottish Labour will not take kindly to it.

Social media history wasn’t going to derail my candidate as far as I knew, but it wasn’t particularly long ago that “MP's expenses” was very much part of the hysterical lexicon, and by my reading of it, they were bang to rights on that front (although it was never for their own financial gain).

Suprisingly we made it to the day when the electoral commission publish the list of candidates standing in each constituency. Expenses not fully clarified and compact document still not signed, but nevertheless it looked like Candidate X had survived.

But then a message came in from a local journalist. They’d got wind of our previous attempted pact with the opposition and wanted to get a jump on the electoral-commission announcement in the afternoon. Were we going to step aside in our neighbouring constituency in exchange for an easier passage in our own?

Head office had told us in no uncertain terms that we couldn’t and they had already confirmed their candidates with the electoral commission, so that was the end of it as far as I was concerned. But Candidate X had other ideas. Prompted by nothing other than wanting to give the journalist a story, Candidate X decided to send a message to our opposition in a last-ditch attempt to get them to drop out before it all became official.

I remember saying “this is absolute madness” as they sent it. Not only was this a complete disrespect of head office, but it also meant that a candidate from our own party in the neighbouring constituency was being offered up for sacrifice without their knowledge. What kind of behaviour is that?

Then, just to ensure we had a full-on shitstorm on our hands, our inept election agent felt the need to notify head office that we’d made contact with the opposition and offered a deal “just to check that it’s okay”. Don’t you normally check that something is okay before you do it? And is something ever okay when you’ve already been told by three separate people (in increasing levels of seniority) that it’s not okay?

To think this was done in all innocence – it really wasn’t an attempt to grass on Candidate X. We were in the land of Chris Morris on Brass Eye suggesting to Mad Frankie Fraser what might happen if he accidentally grassed himself.

This final unofficial request for a pact should have disappeared into the ether. As if we could ever get one of our own candidates + one of the opposition candidates to stand down at three hours’ notice, never mind the fact that each party would lose £30,000 from the electoral commission into the bargain.

But no. The rest of the morning was taken up with calls from head office (all on speakerphone so the whole team had to stop everything and listen). Lord Northerner was particularly furious. It was said in no uncertain terms that Candidate X would have been deselected were it not for the fact there were only a couple more hours on the clock to find a replacement to prevent the party losing £30,000.

Election Agent really wasn’t in my good books. Only the day before he had tried to tell me that I couldn’t use the phrase “let down by X party” on our next canvassing leaflet – that this wasn’t provable and we might get sued. I reminded him of what actually constitutes libel in the Defamation Act 1996 and also the fact that the 2001 Tory-party election slogan was “Let Down By Labour”.

I thought you worked in politics you fucking divvy. How can you not remember that?!?

Then later it transpired he’d given us the wrong address to put on the legal imprint of the leaflet. And this was his own address. Can you imagine that moment where we received a message from one of our campaigners pointing out that our own election agent’s address was wrong?

“Well surely he must know his own address?,” I said to my colleague as we were sitting in the printers, about to run off another 10,000 of them. So then we had to stall them at the printers until we could get Election Agent on the phone to clarify the difference between 'Lane' and ‘Road’, I reiterate: on his own address.

Might as well fast-forward a bit. We’re not going to win now. This will not turn out to be a wonderful tale of how we faced adversity but somehow pulled together to deliver something spectacular. The day-to-day detail no longer matters so much – I think you can guess how it’s been going.

Although we were not officially a target seat in the first instance, we could have become one during the campaign had we played our cards right with head office. Quite a few things had lined up locally and nationally to give us half a chance, but alas Candidate X and their pathetic team of political cronies had shot it all to bits. There are some capable civilian folk working on this campaign, but we are ultimately at the mercy of deluded and incompetent political sycophants. We simply can’t pull it off without an additional push from the party.

And get this: our only chance at getting near to the party’s battle bus was if we travelled an hour-and-a-half to our nearest target seat and got a photo with the leader as they got off the bus, but this would apparently add £15,000 to our campaign costs (which was the exact same amount as our entire budget), and would be billed to us from the central party. Errm???

Surely that can’t be right, but it was accepted as fact by the sycophants. I simply couldn't be bothered to question it further.