So now it’s out! The biggest moment in the Election campaign since it turned out Nigey Farage has been smashing Temazepam like a tweed clad Shaun Ryder.

It’s the clash of the decade: Ed ‘not actually that red’ Miliband has stepped up to be interviewed by Russell ‘Jesus’ Brand. The right wing media are howling in derision, the left wing media are trying their best to look optimistic and Cameron has been snorting about how it’s all a joke – bearing in mind, Cameron also thinks one-on-one leader debates are a joke, but tiny, micro managed rallies in empty cow sheds are pretty bloody spot on.

So, over the 15 minute Trews special what did we learn? Well, in terms of the content of conversation, very little. Ed said all the things he’s been saying up to this point at pretty much every step of the way, and Brand nodded sagely –  even, blimey, agreeing a little. He asked him some monumentally complex questions such as (and I’m summarising, because Russell does love to waffle); Can you have any political power in a world controlled by a financial elite? Miliband would then respond raaa raaa raa, right, raaa, u gotta do it raaa raaa. Somewhere along the way Ed had decided to engage pub banter mode and was dropping his aitches and stopping his glottals like a RADA graduate in the Queen Vic. This point has already been picked up on by The Sun, who splashed a massive MONSTER RAVING LABOUR PARTY headline on their frontpage today, followed with a sub-heading branding Ed ‘Mockney' Miliband. This front page made me chuckle – obviously Ed’s new accent was a bit 'you wot mate?' but in terms of faux-normal, it’s still not hitting the heights of William Hague’s classic “I can sink 14 pints in a night” clanger (Waaaaaheyyyy! Gwarnn HAGUE-Y!!) or Cameron pretending to be a passionate football fan who loves Aston Ham.

To be honest the whole Sun front page looked like the desperate act of a wounded beast – they can get their circulation of 1,858,067, chuck in the 740,00 that follow them on Twitter, and still quiver in the shadows of Brand’s monstrous 10M Twitter reach. This was a point that was addressed in the conversation, with Miliband pointing out that the power of the media barons – your Murdochs and Rothermeres – was diminishing. And in many ways that has been the subtext of the election. The days where The Sun can reasonably claim it was them ‘wot won it’ are over, no matter how Murdoch threatens and cajoles. 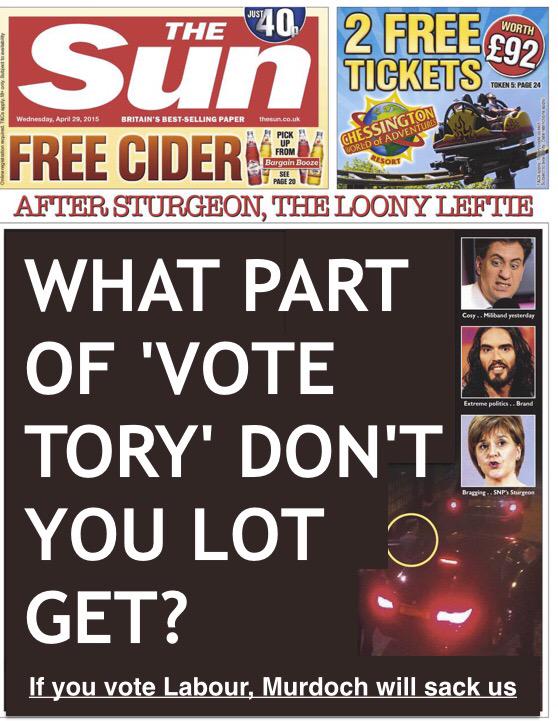 Trews is watched by hundreds of thousands of people, a fair proportion of which are UK citizens of voting age, many of whom won’t have watched the leader debates, won’t be watching Question Time, and won’t be picking up the demonization of Miliband that Lynton Crosby, like some strange gardener of spite, has been seeding into the right wing press. To the viewers of Trews, Miliband is there, presenting policies, seeming almost (almost) human, and encouraging them to vote. The reason this move has been met with such derision by the majority of the printed press is primarily because it fucks with their strangle hold on narrative. They can’t control Brand, and they can’t control the reporting on Brand. A 20 year old doesn’t read the Telegraph to help formulate an opinion on a Youtube video – they scroll down the comments. We’ll find out how much impact this has in 8 days time.

“I’m not looking for euphoria” Ed said towards the end (which I’d like to think was a subtle reference to his days spent bedroom raving to Dave Pearce trance compilations).

“People want a sense that the country is run for them again – they’ve got the sense that it’s run for somebody else, and the somebody else is probably at the top of the country.” And here, at least, he said something that had some sort of resonance. I have no idea whether Miliband will reverse the trait, but I, personally, have spent the last 5 years feeling like the UK government has contempt for me at best and hatred at worst. The fact that Miliband even engages with this sensation is a step in the right direction.

Ironically, Cameron was spotted earlier this week banging on about how ‘taking a risk’ gets him ‘pumped up’ (we even knocked out a few remixes of his blustering over here at R$N Towers) – but this Trews appearance from Miliband was a genuine risk – he managed to get through it without looking like a total arse, and regardless of whether Brand was soft-balling him questions (he was, btw), Miliband has been winning the media battle against Cameron fairly comprehensively. The Etonian incumbent is increasingly looking like a man who thinks he should win simply because David wants the bloody job, and chaps like David get what they want. With little attempt to engage the electorate, a near total kybosh on unscripted encouters with the public, and a contemptuous approach towards young voters who view Brand as a more credible pathway into politics than the fixed grimace of Kay Burley, Cameron is, after a fashion, taking a risk. He’s punting that the disenchanted electorate will remain disenchanted, that 5 years of sell offs, spending cuts and pocket lining won’t have galvanised those who previously didn't (or couldn't) vote, and that he can bag a slim majority of a crap turn-out. And whilst I doubt todays Trews will single handedly change the course of the election, in a race this tight, to mock it's impact suggests that those on the right are either mad, delusional, stupid, or shitting themselves. I suspect all of the above.