Tis the season of the end of year list. Top 10 straight to box set DVDs. Top 1000 digital deep house labels. Etc. Once again we've decided to go for Top 8 Whatevers. The Top 8 things of the year – be them bacon sandwiches; the top 8 times you stubbed your toe against the f*cking boxes full of useless sh*t your girlfriend insists on leaving in the hallway; and so on and so forth (sorry that useless s*it one is a bit harsh). Over the next few weeks until the new year, we'll be publishing the Top 8s of our various excellent R$N scribes.

Jake spent a few months in Berlin this year and explored his love for burgers (WARNING – MAY CONTAIN CHEATING);

I’m never going to forget my first Burgermeister. As I nervously edged my way further to the front of the queue, I desperately ran over in my head how to make my order in German so that I didn’t look like a massive prick upon my arrival to the till. It all fell apart right from the beginning and I didn’t look as cool as I hoped I would. I finished making my order in English and cowered my way back to my table to wait for my number to flash up on the screen.

Once I’d received my cheeseburger, all my initial worries of not being cool were forgotten. My mouth was in heaven. Real cheese, perfectly grilled, slightly greasy burger and fresh crispy salad in a baked to order bun, all consumed whilst sat on an old crate in the middle of a dual carriageway, underneath a railway. If that doesn’t sound perfect to you then you have issues and I’d suggest you go and read someone else’s Top 8. 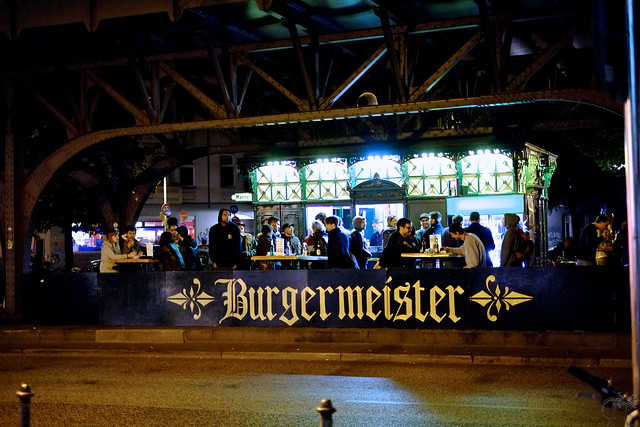 Second time around, I thought I’d step it up a notch and go for something a bit more substantial. Fried onions, bacon and barbeque sauce makes this the meat lovers go-to Burger. Upon further reflection, I think the Meisterburger was the better burger, but it was the experience of my first time that made the Cheeseburger top the list. I don’t think you often hear people say that about their first time… There’s a first for everything I guess.

Discovered this chicken-y gem whilst at Atonal, then on the way home realised there was one round the corner from my flat. You got a WHOLE chicken boob in a burger for €5!? You’d be lucky to get some of that fucking plastic cheese in a stale bun for that price over here. Not only did you get a whole chicken boob, kept comfortable in a nest of crunchy salad, but you also got enough Piri Piri sauce so that by the end of the burger you’re a dribbling, sniffling mess. Perfect.

I was hungry and wandering Mitte in the rain. Everything was grey and sad until I spotted an Italian pizza/burger takeaway in a basement. I was kind of expecting to get a soggy and flat excuse of a burger, but I was wrong to assume. Presented before me was a tower of a burger, in a freshly baked bun and filled out with loads of crispy salad. Yum. Unfortunately my journalistic skills/memory have befallen me once more and I can’t remember the name of the place.

Again, just down the road from my flat in the heart of Kreuzberg, this tiny little burger joint looked like it had been squeezed into a broom cupboard. The burgers that came out of it tell a different story however. So tall that you physically can’t eat it without a knife and fork, unless you fancy being a messy little shit and getting food all down your top of course.

Massive amounts of meat and massive amounts of salad in a light (but large) bun, all served with a healthy portion of perfectly fried chips. If this isn’t the best way of getting fat, then I don’t know what is.

I’m going to admit it now, I formed a bit of an addiction to Burgermeister. (That, and I can’t count very well and needed to fill out the rest of the list) If you ever find yourself in Kreuzberg, I’d highly recommend. I don’t think you’ll ever get such a good burger for such a decent price anywhere else.