“I Was Punched In The Face For Being A Numanoid”

Over the years, Gary Numan hasn’t done himself too many favours with the press or the wider public.

Forever haunted by his early admission that he was a Tory voter, it was as if, with the NME and others bearing down on him as he was blamed for all of the ills wrought on the country post-1979 thanks to Thatcher, he merely shrugged his shoulders and decided he didn’t give a monkey's about what people thought about him.

He professed his love for flying – something you couldn’t see many Minimoog wielding post-punks who’d traded their guitars in for synths doing – habitually retired from live performing (after going on tour with a lavish stage set that included some kind of buggy and pyramids), sacked off the band, Tubeway Army, to turn out android friendly tunes that, his many detractors believed, borrowed all too heavily from Low-era Bowie, beat a lot of his contemporaries to the punch in terms of chart success and become the subject of much teenybop fascination. Even then timing was against him – he seemed to miss any boat that was going in the early 1980s – too straight to be New Romantic, too leather tie to be punk – he fell between the cracks and was picked up by, well, the Numanoids.

The Numanoid. The ultra-devoted Gary Numan fan. The butt of many a music critics’ joke for years, the kind of insult thrown around school in the 1980s (“you’re such a Numanoid”) and more.

The more devoted among his acolytes went above and beyond the call of duty – as well as buying every format of every release, picture discs, Cassingles and all, the hardcore dyed their hair to match whatever colour their leader was sporting, wore two-tone leather ties (half red, half blue) and those weird leather belt things around their chests and from shoulder to waist. Heck, they even went to see him “live” when he was flying at air shows. (This really happened.)

And, of course, as those not devoted to Gary and all things Numanesque, the man even married one of the Numanoids, a super fan event if ever there were one. Cue much more derision from, well, everybody.

Numan’s life is laid bare in current documentary Gary Numan: Android In La La Land, which sees the reclusive and painfully shy singer opening up to the cameras – his thoughts, his private life, his career, everything is on display. What’s amazing, as a fairly long-term Numan cynic, is that he’s actually a thoroughly decent bloke – honest, and, perhaps surprising given the flak he’s got, not especially bitter. His wife Gemma seems good as gold too, their relationship is a lot more normal than it sounds (“he married a Numanoid”). What you realise too is that while Numan may have been a figure of fun in the UK (Numanoids aside) his influence stretches far wider around the world where people, from techno pioneers and hip hop producers to industrial legends and metal giants, aren’t ashamed to admit their love of the man in the Cars and his influence on their own music (chief among them being Nine Inch Nails’ Trent Reznor, who appears in Android In La La Land.

This writer went to see Numan in concert last year, as he played three nights at the Forum going through his earlier albums. It was partly to see the Numanoid in their natural habitat (my feeble attempts to take photos of some of the more extreme ones failed). There were red and blue leather ties aplenty, splashes of red dyed on to already dyed black hair (trademark Numanoid, even among the less hirsute – OK then, balding – ones, other little flourishes; their devotion is unquestionable. And here I was surprised too – the music was a lot better than I’d remembered, and, while still giving us the odd giggle, the fans even added something to the proceedings.

Armed with this new found grudging Numan admiration, I tracked down one of his devotees, Ian Abraham, a thoroughly decent bloke, in his 40s, a former record industry A&R man, sometime journalist and now restaurant manager, based in his home city of Liverpool.

He was six when Numan’s breakthrough single in Tubeway Army became number one, barely into double figures when he saw his first live show, and even ended up working with the man himself (“it’s helped the number of shows I saw,” he laughs).

His nan bought him Friends… (“I played it and the B-side all the time”) and the same happened with two Numan albums, the final Tubeway Army outing, Replicas, and the first solo Numan long player, The Pleasure Principle. He listened to them so much, his family effectively banned him from the repeat performances. “I just used to play them all the time, it must have been a huge irritation,” he says.

Years of being a Numanoid have not necessarily diminished his love for the singer and his work, but it hasn’t always been easy: “Being a Gary Numan fan has been hard,” he says, “but those days are thankfully not quite as severe now. In a way, it helped my love of the music get stronger.”

But why? People would react strongly going right back, he notes:: “They’d say ‘he’s crap, why don’t you like punk?’

“Part of it was a rebellion against the way my friends and peer group used to look at Gary Numan.”

He’s had both brickbats and punches thrown his way over the years: “When I was 16 or 17 I got punched in the face for liking Gary Numan. I didn’t do anything about it, I thought, it’s not going to stop me liking Gary Numan, is it?” 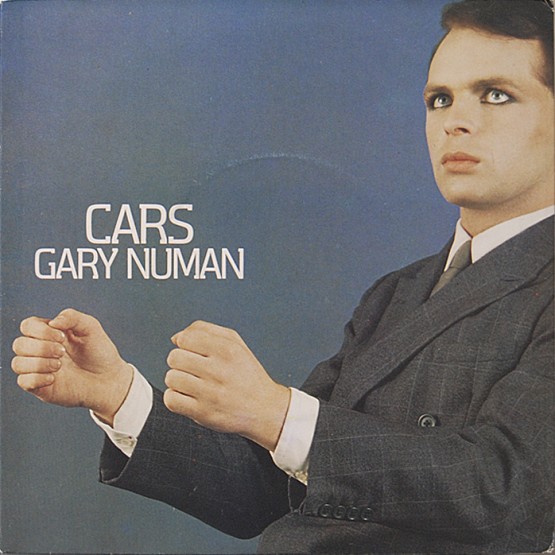 And when he got his first record company job,     there were further problems. He was told he could get some posters framed to put up on the wall of his office – two of the three he put up were Numan-related. As he recalls: “My boss said ‘you’re taking meetings with new managers, new artists, I’d like you to take the pictures down it reflects badly on the company. You’re meant to have good taste and quite frankly, it’s embarrassing’.”

Embarrassment, and variations on that, crop up again and again during our conversation – when recounting the amount of songs he has, it comes to the fore again. “He’s the soundtrack of my life. I have 1300 or 1400 Numan songs on my iPod, pretty much everything he’s done, as well as fan mixes, bootlegs and a lot more. I’m not embarrassed by it.”

He thinks part of the resentment came down to Numan’s success (“He said in an interview, ‘the thing about being a number one artist is that 350,000 people know you and like you, but in a population of 5 0million, that’s a lot of people who don’t like you and didn’t buy your single.’.”

His aloof persona was another element that turned many off, but as Abraham insists, it was caused by his nervousness. As is suggested by Android In La La Land, Numan’s a decent fella (“once he realised you were alright, he’d talk to you at great length,” says Abraham, “he’s very, very intelligent, he’s still bowled over by his success”), his wife is more than just a Numanoid who got lucky (“he married a lovely, lovely woman,” he says).

The rehabilitation of Numan has been welcome, but then again, Abraham has no regrets anyway. As he explains: “The stories of Tricky hanging out and listening to the Pleasure Principle, smoking inordinate amounts of spliff… this music meant the world to him. The first Nine Inch Nails albums are like listening to Telekon.

“It’s been a pleasure. I’ve been to a lot of shows, 99 per cent of them have been nothing short of fantastic. The last record is up there with his best. I’ve chosen an artist who’s stuck with me, I’ve stuck with him. I’ve got mates who like, say, Guns N Roses, that’s a band you see once every 10 years.”

Abraham draws the line at some of the more outré Numanoid behaviour. “I’ve not got a huge collection [of memorabilia]. I’ve never been rich enough to afford the acetates, and test pressings. The South African 10” that went for £1,000, I can’t afford that kind of thing.

“The dressing up costs money. I’d never go to the show dressed [like Gary Numan]. There’s people at the shows, they’ve made an effort, people dressed in the Berserker gear. That’s great, well done, but who would I want to look like him? I used to stand in front of the mirror, singing as a kid, but I never wanted to be him.”

There was the one time though, in his time in the record industry, as he recalls: “I went to Franz Ferdinand’s manager’s fancy party dressed as Gary once. I took it seriously, I felt quite superhuman with the jump suit, red leather belts, red tie. But I’d never go to the show dressed like that.” Most embarrassing moment as Numanoid then? “I stood up in front of people and mimed I Die You Die. There was no alcohol involved. I think of that and I cringe.”

He’s not embarrassed by one of his most recent moments though, after the last of the three gigs at the Forum mentioned earlier: “He said ‘I can’t thank you enough.’ He knew pretty much 50 per cent of the audience had gone to all three shows. He said he didn’t realise down the years how hard it has been for Numan fans. ‘I’ve always got my head down, not been easy for you. I can’t thank you enough for still being here, still taking an interest.’

“I cried, I’m not embarrassed to say that. There were a few slightly damp eyes. I told my wife later and burst into tears again.”

But, as he concludes, his love of Numan isn’t EVERYTHING.

“It’s not my life, I’m not defined by my love of Gary Numan. But I know whenever he’s on TV, someone, somewhere will think of me. I have a lovely wife, a season ticket at Liverpool, a job as a restaurant manager, a few good mates, a nice family, I’m content. But playing Gary’s music makes me happy. I can’t recall a day going by when I haven’t mentioned his name in one way or another.”

Thanks to the lovely Ian Abraham, a thoroughly decent chap, for talking about Gary Numan.

The film Gary Numan An Android In La La Land is out now at cinemas and well worth seeing. It might well change your mind about him…