Review: Room For Rebellion In Belfast Earlier this year, A UN committee gave a damning report on the state of Northern Ireland’s abortion laws. The law, at the time of writing, states that, in theory, a woman could face up to life imprisonment if she is found to have an abortion. This, the UN states, is a violation of women’s rights, and an outdated concept that puts women in some “horrific situations”.

The North shares the ban with the South of Ireland. I’m sure we can all recall the horrific news story of 2012. Savita Halappanavar died from septicaemia, a term used to describe blood poising, in a Galway hospital because she was refused an abortion. A Muslim woman was denied an abortion because Ireland is a “catholic country”. Now she is no longer here.

It inspired a wave of dissent.

Enter Room For Rebellion, an ambitious and inspiring ‘political party’ based in London, Dublin and Belfast. The concept is headed by Isis O’Regan, Hollie Boston, Anna Cafolla, Jess Brien and Cait Fahey, a quintet of passionate, angry and motivated individuals determined to repeal the 8th Amendment, paving the way for a more equal, safe and healthy Ireland. 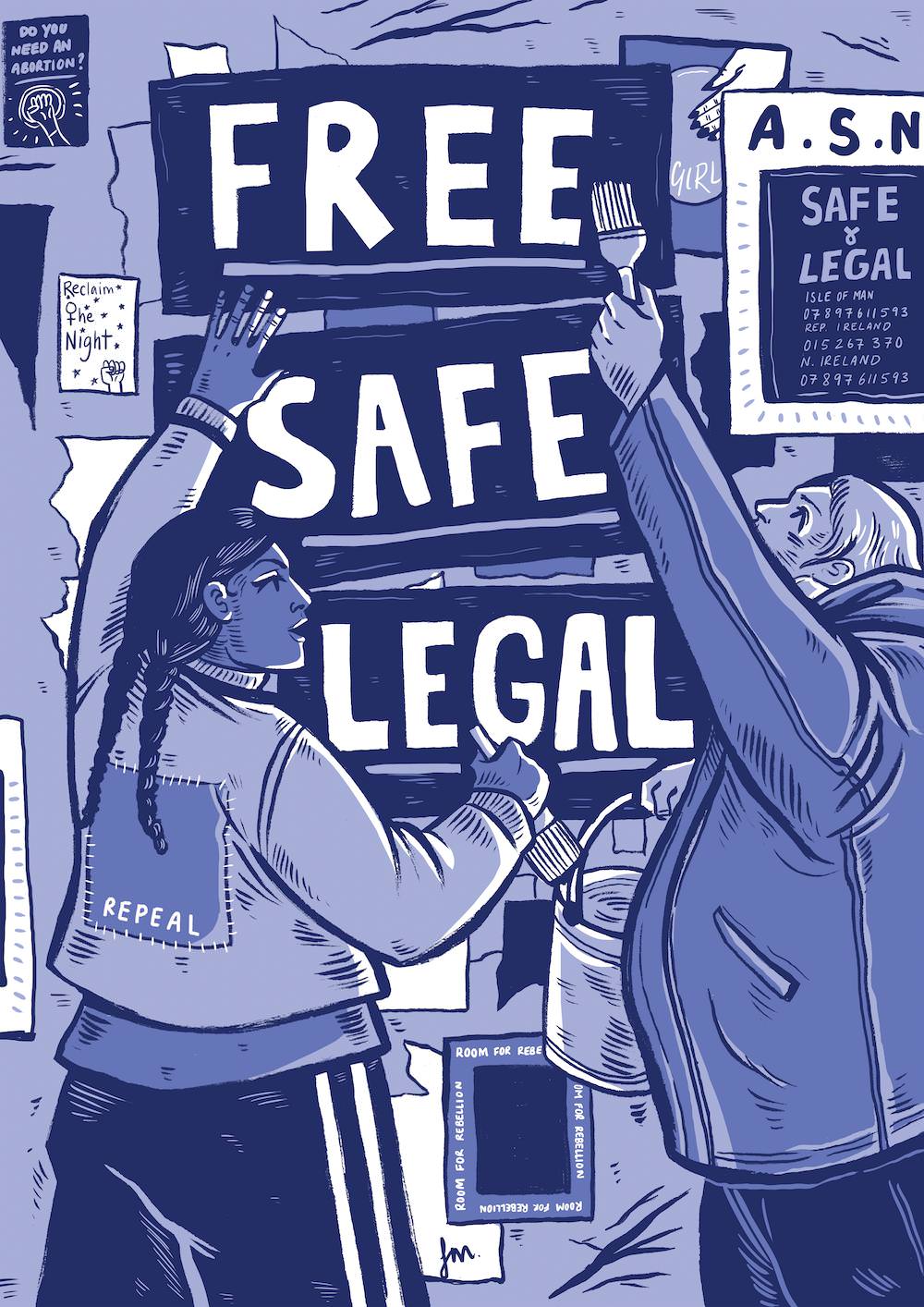 We’re in Belfast, where the Portuguese DJ Violet and local outfit GIRL are in control. There’s something wonderful about dancing for a cause, knowing that there are those in other cities around the world doing the exact same thing. Its unity that is going to be essential in securing the correct decision in Ireland’s referendum, expected to take place on May 25th.

GIRL got things underway in the dark glow of the Black Box. The doublet is made up of Claire Hall, who DJ’s under her Paris is Burning inspired alias of Venus Dupree, and Marion Hawkes, a local selector credited as one of the most knowledgeable in the Irish scene.

Together they’re a vision, flowing organically between the sounds of disco tinged house, unrelenting techno and ballroom culture inspired vogue. They provided one of the highlights of the evening in playing Matias Aguyo’s remix of ‘Nasty Woman’, a poem written by a nineteen year old Nina Donovan, read by Ashley Judd during the women’s march in Washington last year. It may not be directly linked to the cause here in Ireland, but it follows the animated stir for female empowerment.

“See, even when we do go into higher paying jobs our wages are still cut with blades, sharpened by testosterone. Why is the work of a Black woman and a Hispanic woman worth only 63 and 54 cents of a white man’s privileged daughter?” it reads.

“I am nasty like the blood stains on my bed sheets. We don’t actually choose if and when to have our periods. Believe me, if we could, some of us would. We don’t like throwing away our favorite pairs of underpants. Tell me, why are tampons and pads still taxed when Viagra and Rogaine are not? Is your erection really more than protecting the sacred messy part of my womanhood? Is the blood stain on my jeans more embarrassing than the thinning of your hair?”

It’s a powerful message, not one that could be played out in any environment, but one that works magically here.

Next up was Lisbon’s finest, the musical moniker of Inês Coutinho, founder of Radio Quantica and naive, a label where she released her acclaimed, jungle inspired EP Togetherness EP last year. She’s an artist with a political vision, pushing for gender equality in dance music through engaging avenues, like her featured remake of Underground Resistance’s ‘Transition’ to coincide with International Woman’s day.

Tonight, her set consists widely of UK influence. Breaks galore. To be honest, it’s exactly what you wanted. There’s an oxymoronic symbolism to breakbeat – the melodic, optimistic atmospherics combined with the angry and righteous drum patterns.

You don’t hear a lot of garage being played in Belfast, which I find truly disappointing. I wasn’t in for a disappointing evening here. The second highlight of the evening came in the form of Roy Davis and Peven Everett’s live garage version of Gabriel. The set continued to float effortlessly between genre with everything from Nitzer Ebb’s ‘Join In The Chant’ and LOOKY LOOK’s ‘Crotch Rocket’ there to be enjoyed.

The evening reached its end and those involved embraced one another. There’s a real feeling of optimism about the upcoming referendum. Piece by piece Ireland is clawing back its freedom from its oppressors.

Who would have thought that in 1983, when Ailbhe Smyth was denounced as a “baby murderer” as she campaigned for Irish women to have an abortion, we would still be waiting, 35 years later, for women to simply have the rights to their own body?

Finally, change seems on the horizon.