“What, you’re reviewing the club?”

So said some chap outside the smoking area of Fabric, at some point during the Body & Soul eight-hour marathon at the club. This was to be the penultimate edition of Need2Soul, a longstanding institution in soulful house.

“What you going to say about it?”

Er, not really sure.

Funnily enough, everyone I spoke to before, during and even after the event asked…

“What are you going to put in the review?”

There were plenty of helpful suggestions.

“Why don’t you put that in your review?”

So here then, with additional comments, are the things everyone else thought I should include while discussing Body & Soul.

“You’ve got to say they played this one.”

Lists of records. Always a winner. Right back when Body & Soul was still an ongoing night, at New York’s Club Vinyl, its website in original early Web 1.0 form used to post up playlists of what they’d had on that evening. It was what the Internet should have been all about, just lists and lists of records. But you know, in a review like this, just saying “and then they played that one with the bongos that goes on for ages, before slamming into James Brown’s Superbad and the crowd went wild” just starts to grate after a while. Even if it did happen on an otherwise miserable London Sunday. 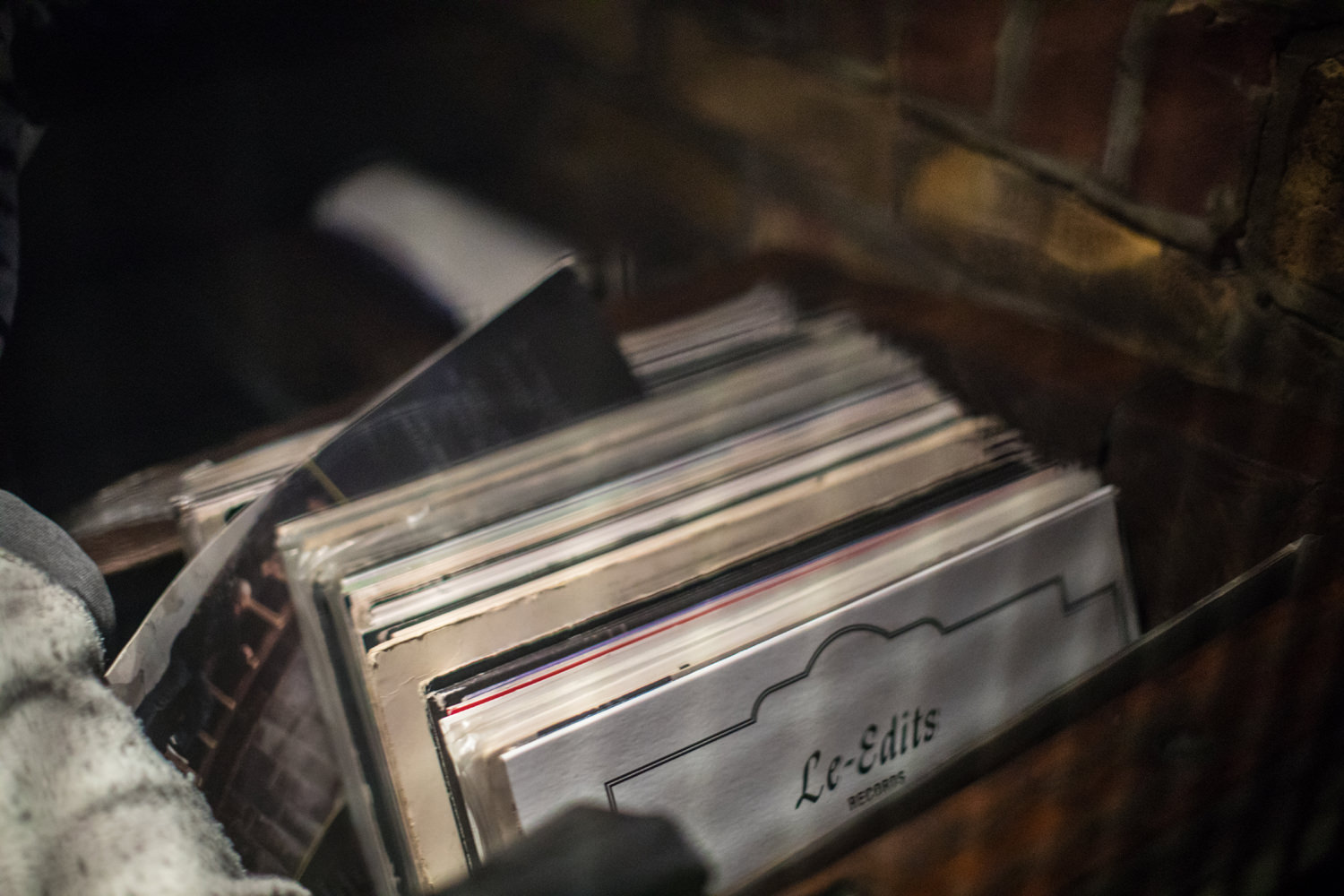 As an occasional Body & Soul regular back in New York, when flights were cheaper, the pound was strong and we had mates living in the city I can safely say that the evening wasn’t all about nostalgia – sure the obligatory were there (Chaka Khan’s 'I Know You I Live You' being a case in point) but there were some (gasp) new records, some old, classics and less familiar ones.

First time I went to B&S, it was an alcohol free zone, it seemed to vary on a fairly random basis. Even at the height of 1988 madness in the acid house, when everyone was drinking Lucozade and Ribena, I always found anything alcohol-free a bit of a downer.

“Oh, but it’s got a juice bar,” everyone said when the Ministry opened. Well done, you divs. Fabric has free water points these days, which is a bit New York, but the fella lining up shots for him and his pals at the bar, was very not New York, vibes. What was missing from Fabric was the NY, post-Loft, post-house friendly vibe, different from Fabric’s. It was just, you know, a bit shovey. Gone too were the Chelsea Boys and Muscle Marys over in the corner, the kind of tribal divisions you used to get at Vinyl (something about taking your top off obviously manages to pull fellas together)… Body & Soul also took place before an era of smartphones, when you know, people weren’t filming every single second. 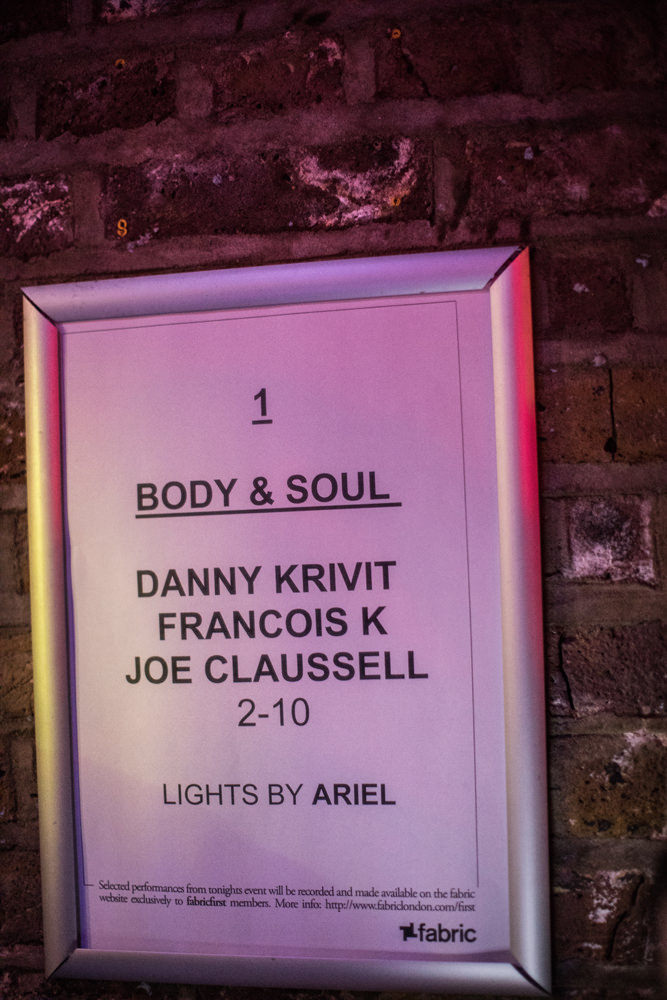 How was Fabric as a venue?

They had some balloons on the ceiling. But it seemed like, at times, the sound system was buckling under the weight of excess EQing. But when it was right, with the lights going and the sound in the right place, it was spot on.

What’s your name and where you from?

Someone genuinely asked me this. I think they wanted to make a point about people who live in London being “up themselves” and cynical. Which is probably right.

How were the DJs?

At Body & Soul you could often tell when each of the trio were on – the more disco elements came from Danny Krivit, Francois K (the best of the bunch to my mind) the more leftfield and eclectic, with the dubby Berlin Rhythm and Sound style workouts alongside the disco and house. Meanwhile, Joe Claussell, aka Bongo Joe, going potty with the EQ on his extended bongo workouts. Despite the requisite classics, there was stuff you hadn’t heard before too. Thankfully, given their collective history of clubbing, they’re obviously not just there to trot out the classics, Butlins Weekender-style, there’s still the odd curveball thrown in too.

How many times can you get the phrase Bongo Joe into a review?

It’s still one of the finest nicknames ever: Bongo Joe. Born of one of the barbs from the old Faith Fanzine site, where there was always talk about Bongo Joe, as well as a series of pictures of a London DJ doing “air EQing” and pretending to be Bongo Joe. Walking in, first familiar face we bumped into said: “Bongo Joe’s at it already, making the system scream and your ears hurt.”

It’s easy to cynical London types to be all London-y and cynical, with your Bongo Joe comments, but I’d always like to think of Bongo Joe as a nickname given with affection as cynicism.

How was the Bison Isolator?

Actually, this is nearly as funny as Bongo Joe. Not sure where it came from, nor is the person who texted me that exact question about Bongo Joe during the evening. But it’s one hell of another nickname for him.

It’s very easy to be cynical about Body & Soul. But it really is a bona fide institution, one which, I’d wager, helped reinvigorate a lot of people and properly get them back on the house track at the jaundiced end of the 1990s; B&S in New York, the then nascent Faith parties, Lazy Dog and Soulsonic in London all represented a swing back to house for your correspondent and others (yeah, I know you were into it all along).

But when they’re playing the Bongo Joe remix of Instant House’s Awade, it really is hard to argue against the power of Body & Soul. At that moment, it’s the right venue, with the right crowd, with the bongos going potty all over that Macho sample, organ screaming, even the most hardened cynic will at least raise their hands…