The range of diversity on offer during this Dutch showcase festival belies belief. Le Guess Who? provides a stage for the unconventional, bringing together exotic electro chaabi, alternative hip-hop, classic middle-eastern sounds, with avant garde electronica, ambient, and cutting club music. Situated in the small student city of Utrecht, the festival momentarily transports you into another word of rich global sounds, separated by just a few staircases, or a short journey along the canal.

Setting up base in Amsterdam, the train journey to Utrecht in just under 25 minutes, and like most city-based festivals such as Unsound and Club2Club, the city is itself part of the festival’s experience. Set across multiple venues in Utrecht, with a line-up featuring a whole plethora of genres and artists new and old, Le Guess Who? sets out to challenge preconceptions about how a festival should be programmed. It is non genre-normalising, with no fears of putting newer, esoteric R&B acts, next to long-serving African exports. With the majority of the program taking place in the city’s fantastically structured TivoliVredenburg auditorium, the weekend at Le Guess Who? was spent the most time journeying between floors, checking timetables, and the biographies of newer discovered talents.

With its rich, diverse lineup, this year’s programme — as curated by experimental Afrofuturist Moor Mother, folk-crooner Devendra Banhart and featuring a showcase by independent Brooklyn institute RVNG — was, above all else, encapsulated by the strong performances of its R&B and hip-hop artists, who provided the backbone and energy of the festival. On Friday, singer and producer Josiah Wise, a.k.a. Serprentwithfeet won over the audience with his honest, soul-felt performance. Poetic and blissful, bouncing between stronger, R&B tracks, with soliloquies performed on the keyboard, Wise performed the majority of his recent, critically received Tri Angle LP Soil, while actively working to engage the crowd, bringing them into the music. 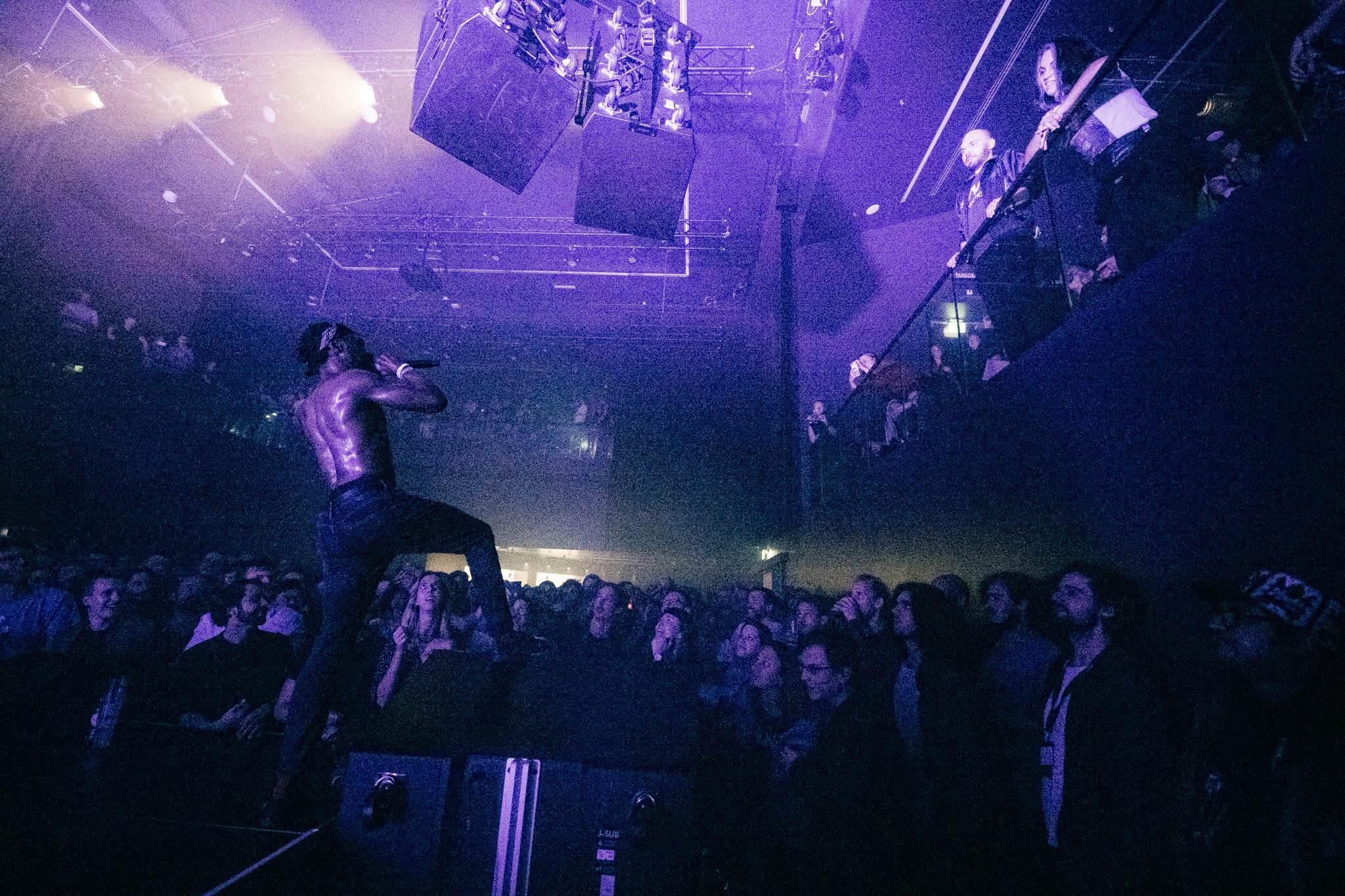 Towards the end of Friday night, American rapper JPEGMAFIA tore the roof off  with his thunderous energy, and heavy-hitting sound. The L.A. based political noise-artist set the stage alight with unprecedented, fiery gusto, jumping into the crowd, starting mosh-pits, running from one side of the stage to the next – lying on the floor whenever he was maxed out of energy. Playing songs such as latest single 'Puff Daddy', through to 'Baby I’m Bleeding' and other joints from his 2018 LP Veteren, JPEGMAFIA was easily one of the most talked about (and photographed) performances from the weekend. Across the weekend there were also an exclusive performance by Saul Williams and King Britt (a.k.a. Hyperdub’s Fhloston Paradigm) – the two of which provided an improvised set of muted, electronica and political poetry. The performance, which went under the title – 'Unanimous Goldmine', a reference to Williams' upcoming film and book project, was tinged with cutting lines and references to our socio-political times. King Britt, who was also celebrating his fiftieth birthday, was by far on-point with his dynamic, analog, and bass heavy sonic underscoring, showing why he’s still one of today’s most important producers.

On Sunday, R&B soul-singer Tirzah slowed things down with her melodic, R&B and pop. Playing tracks from her celebrated LP Devotion – such as 'Gladly' (there were at least two couples making out to this), and the infectious 'Devotion'- the UK singer swept up the crowd with her emotive, yet subdued alternative music. The crowd of which also featured Saul Williams and King Britt, showing that her slow, hip-moving grooves are gently getting the attention of bigger names.

Overall the older and more casual looking crowd is a bit different to that which you would find at more experimental events, especially when compared to something like Unsound, a festival which also prides itself on booking such an array of diverse talents. Le Guess Who? doesn’t market itself as something exclusive to only those with extreme tastes however. Along with more legacy rock bands, and artists that tailor to a more worldwide audience (Hailu Mergia, Sons of Kemet, and The Heliocentrics for instance), there were some intense moments of electronic-experimentation. And a lot of it was there on behalf of RVNG. Performing in Janskerk— a church in the very centre of Utrecht — Russian artist Kate NV was highlighting what made her 2018 LP для FOR so endearing. Playing with a bunch of modulars and accompanied by a flute player, the avant gardist sequenced a series of atonal melodies, that resonated through the church. The sound, although obtuse at times, kept circling back, creating a harmonic, resonate noise throughout her addictive, yet charmingly-weird live set. Following this, Oliver Coates invoked the spirit of the Arthur Russel, with his take of experimentalism, while playing the lead on cello. Coates’ performance was more sombre than one might expect having just heard his latest IDM offering Shelly’s on Zenn-La LP, yet the deep ambience, and strings worked in one with the setting.

Lucrecia Dalt performed in the Herz auditorium, also on behalf of the RVNG showcase. The Colombian sound artist sat on the stage in a subdued setting, controlling various buttons and modular gear, creating echoes by bouncing frequencies and effects throughout the room. Like her geologically inspired LP Anticlines, the role of the performance seemed to revolve around the creation of a cavernous environment, which she could control through sound manipulation. Amidst the experimental noises and rumblings she performed the tracks 'Tar', 'Edge', and 'Atmospheres Touch' from her LP from earlier this year. The latter track opening her performance, setting the ambience that was to come.

On the top floor of the TivoliVredenburg, Italian modern-age ambient producer Gigi Masin performed with his unique brand of soft, cerebral music. The artist who’s best known for his stunning records on Music From Memory, and collaborations with Young Marco, felt sadly out of place with his serene music squeezed in-between the ferocious energy of the artists set either side of his performance. Also in the same space, PAN’s Eartheater danced and rolled around on the stage, singing along to the hard-and-heavy tracks from her PAN debut IRISIRI.

One of the main surprises from the weekend came thanks to Maria Chavez; part techno DJ, part sound artist. Chavez, refers to herself as an 'abstract turntablist' and is the author of Of Technique: Chance Procedures On Turntable, a series of essays on how to use record decks in abstract and artistic ways. During her show at Le Guess Who?, Chavez showed how she 'ruins' records, by performing with several pieces of broken vinyl on a deck with two needles, skipping in-between each rotating plate. The end result is a bizarre mix of musical segments, seemingly blended together and connected by the hum-and-hiss generated through the needles. Chavez has created an extremely unique take on turntablism with this one-off approach to musical deconstruction, imparting a very lasting impression. 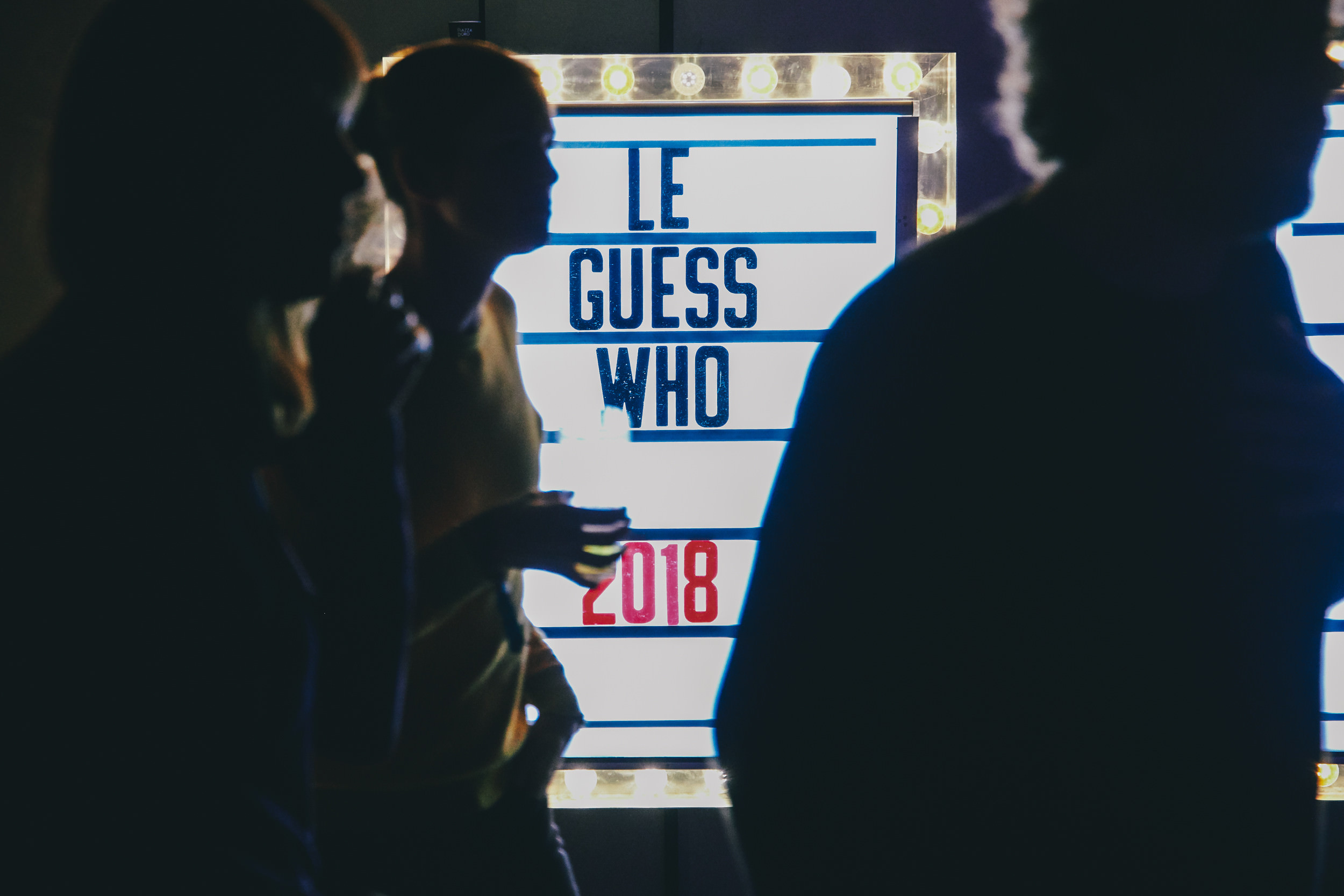 Le Guess Who? works well on so many levels, providing a great opportunity to see so many influential, and pioneering artists all at the same time, as well being a platform to discover new sounds and talents. The full schedule can be slightly divisive by providing too much of a good thing. Too often across the weekend, there were many program clashes, forcing you to chose one act above another. This in turn lead to a lot of long queues in the TivoliVredenburg, which on occasion meant that you had to miss Islam Chipsy, or Roger Eno for instance. The payoff is worthwhile though, and sometimes one has to just bypass that fear of missing out. Le Guess Who? shows that a strong dedication to believing in your programming and experimentation earns you the respect and accolades it has received. It pushes people to leave their comfort zone and get outside of Amsterdam, while at the same time entrusting those it made responsible to curate the proceedings.