Carcassonne, we are reliably informed, hasn’t succumbed to outside forces since the pope’s army turned up to put the Cathars and associated hippy heretics to the sword in the Middle Ages. And yet this year, returning hordes once more returned to the city, descending on the walled castle after a brief sojourn to Sète, for the annual Invasion of the Stripy T-shirts that is the Andrew Weatherall-helmed Convenanza. We listened into people’s conversations for the weekend, and this is what they were talking about…

It’s an inauspicious start to the weekender, as an assortment of passengers are held up on their Ryanair plane after one passenger, as the captain pointed out, was not showing the correct manners and opprobrium on the flight. Wildly inappropriate behaviour – more Love Ranch style psychedelic skinhead turnout than peace and love vibes – didn’t endear the miscreant to many. The general Club 18-30 meets Saga holidays feeling on the flight didn’t bode well. Luckily, gossip about this behaviour aside (“Are you the sex pest?”), the bad behaviour didn’t follow the British contingent from the airport; Le Vieux William turning up on board helped sober a few people up…

“What is this music called? Not having a go, but what is it?”

“Bats bump into you and get stuck in your hair.”

Aaah. Those nights out. The ones where someone tells you something like the above, or that spiders have a fear of conkers, and because you don’t Google that kind of thing, they continue to insist it’s true. 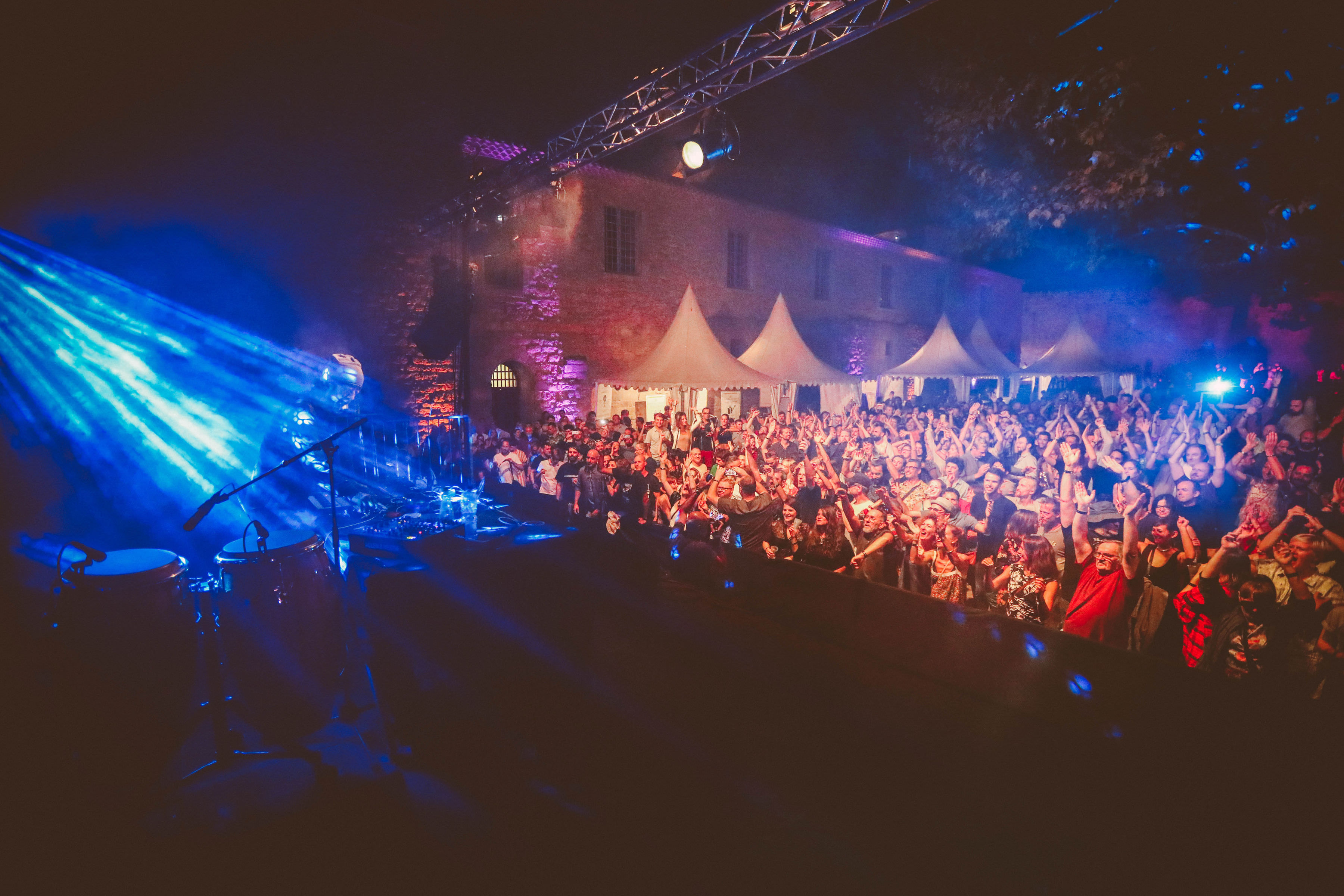 On to the first night. After Weatherall’s usual Music’s Not For Everyone early doors session, it’s time for Komodo Kolektif. Weatherall groupies in the know would have seen them playing live with him at an Ambience Chasers night at the Social a while back. As he noted, MFNE duties at the start of a show suggest putting on religious garb. But the duo are actually wearing said robes. And something on their heads…

See above. As sported by one of the Komodo Kolektif, it looks, to my companion’s eyes, like the Jewish candles. Only not lit up. I’m getting a Crazy World of Arthur Brown vibe. And, ditto, only not lit up.

Meanwhile, as the be-robed, be-weird-headgeared Komodo Kolektif are banging gongs and all sorts of weird bells. The households are growing restless, one trying to elicit some kind of reaction. On a weekend where welders’ masks and knights’ helmets are becoming increasingly essential items (helmets in helmets putting the fun back into clubbing should be outlawed, according to this misanthrope), this band are the only ones with my permission to wear wacky stuff. This, in turn, allows them to get away with noodling a little bit too long, thanks to their outfits and the bells they ring at just the right time throughout a lengthy first song. It’s made better still by knowing absolutely nothing about them: it could be my dear old mum under that lot. The name comes from Japan via Deutsch Elektronische Musik, although they’re probably not from either country. A bit of mystery. That’s what I like.

“If he plays two of my tracks tonight, I’m off to do some acid.”

So says someone to us during a lengthy story about hallucinogenics and dinosaurs coming out of the sea in Thailand. He’s in a band you see, there’s a possibility that A Love From Outer Space might play one of the tunes on his forthcoming EP. What’s more, it suits the psychedelic weekender feel.

God, I love a band with three guitar players. As the ever-expanding Liminanas take the stage, it’s apparent this motley crew now boast three, ahem, axemen. They need no introduction to Convenanza regulars, having turned out at the festival a few years ago, but they’re louder, meaner and a lot more fun. And wait, is that Mother Sky? Is that Gloria? This band know their punk rock in all its forms… 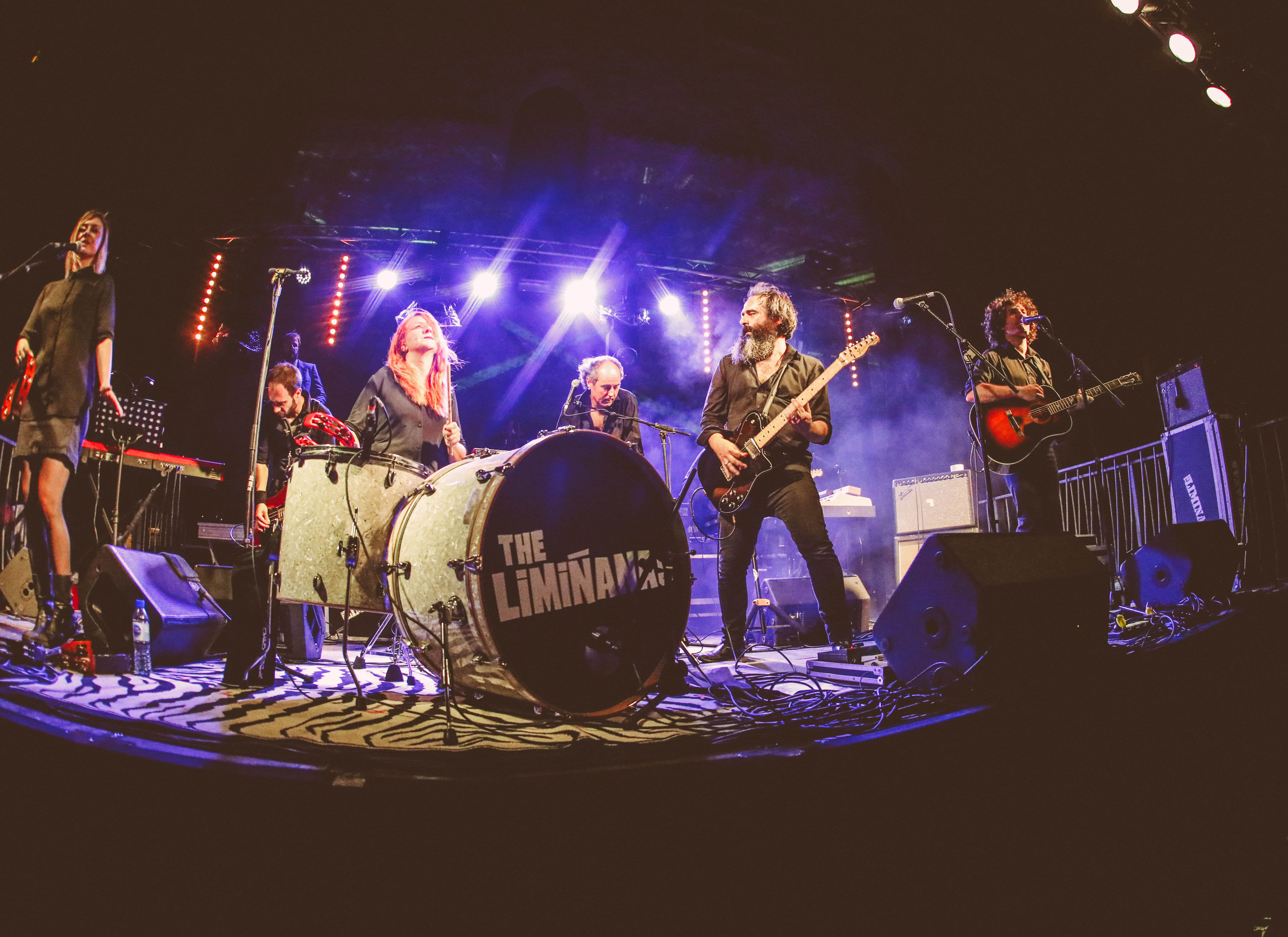 “That Frankie Goes To Hollywood was the highlight for me.”

Everyone had their own A Love From Outer Space moment. But probably the most talked about was Sean Johnston, alongside Mr Weatherall, playing a full 10-minute plus 'Welcome To The Pleasuredome'. What’s more, it was a full length original (one of many mixes), rather than a cut and paste edit jobbie. That Fjordfunk and Amy Douglas were up there too though…

“They’ve just ordered loads from one of the waiting staff.”

Shout out to the kind and friendly staff and workers in the service economy across the city, doing their own bit to ensure the festival goes off smoothly for visitors, going that extra length for customers and also showing a true entrepreneurial spirit.

“You missed him playing Julian Cope’s 'They Were On Hard Drugs'.”

Saturday evening and there’s no 7pm queue. It’s getting a bit jaded already. Some didn’t even make it out on the second evening. And for those of us eating a grande assiette de fromage, we missed this one. Quintessential Music’s Not For Everyone early doors Weatherall business.

Finding the biggest plate of cheese. That’s what it’s all about.

“I’ve never heard anyone making that noise with a guitar.”

And on come one of the most eagerly awaited bands of the weekend, Die Wilde Jagd. Yes, we saw you all rushing out to buy their outstanding new album Uhrwald Orange when it was announced the German elektronische duo were providing the music at Convenanza. And money well spent it was too. They’re the perfect Weatherall band – electronics and real instruments, punk spirit, influences ranging from your favourite soundtracks to dub to Krautrock, psychedelic tranzmusik – but still sounding new, original. On the night? Boy, did they live up to the unbearable weight of expectation laid upon them. Making more than enough racket for just two people, they had an array of effects, gadgets and boxes, with singer and multi-instrumentalist Sebastian using those pedals that loop a bit of guitar, adding layer upon layer. You know, like the ones Ed Sheeran uses in stadiums, only with far less shit end results. And the sounds he get – only someone such as My Bloody Valentine’s Kevin Shields can get the full range of noises that the boy gets from his guitar. As it nears a climax, his instrument is making sounds I didn’t think were possible to come from a guitar…

“Have you had any of the Jungle Juice?”

Psychedelic psilocybin natural drink that was doing the rounds. According to at least two people who came charging up asking if I’d tried any of the “Jungle Juice”. Um Bongo it ain’t. 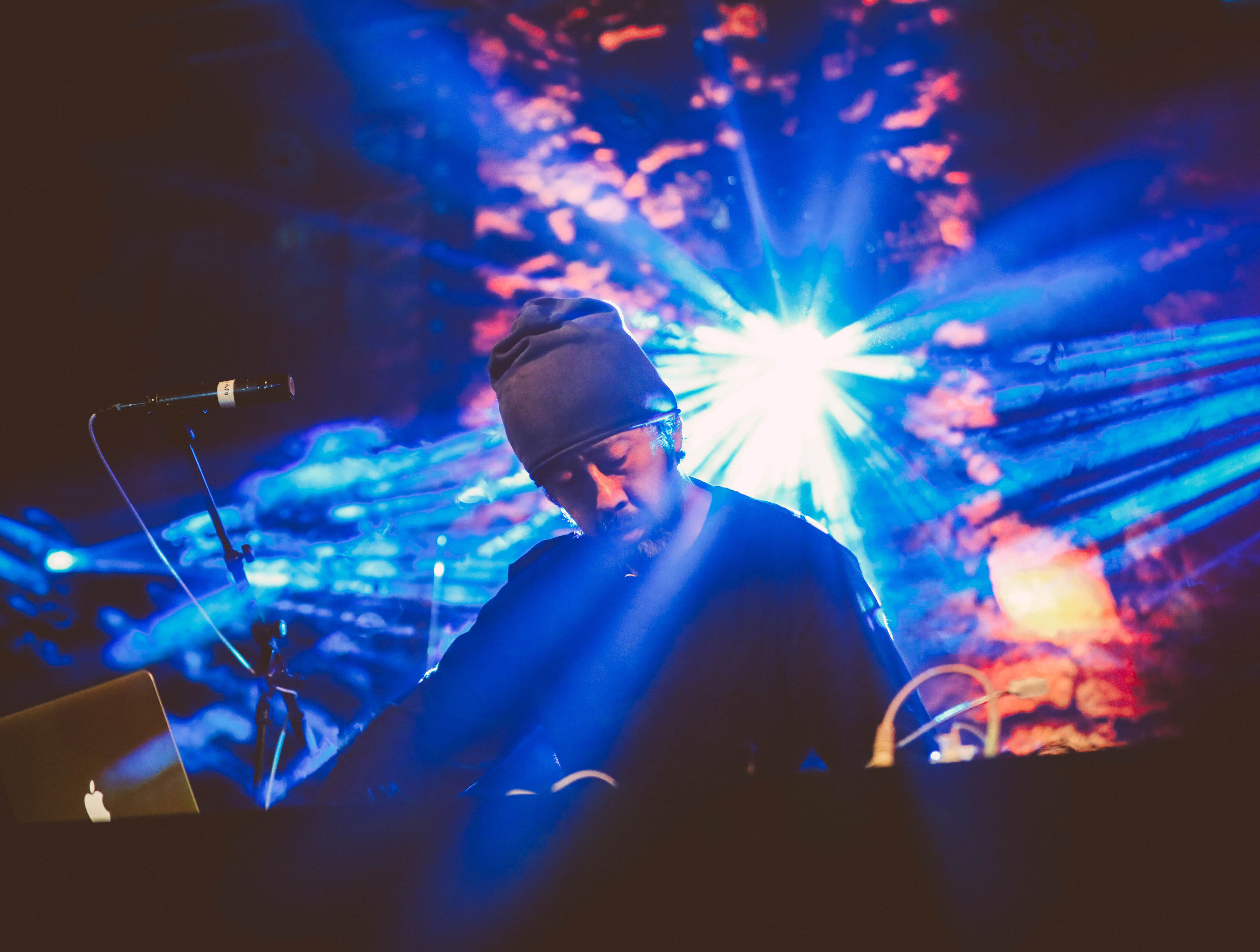 Bless dear old Kuniyuki Takahashi. A hugely polite and thoroughly nice person, he opens his set with a long speech about his spiritual journey and the thinking behind his set. it’s the most Japanese thing you’ll see this year. “Get on with it mate", the heretics in the crowd shout.

“He’s taking us on a journey, but very slowly.”

Starting just with a few percussive noises, including tapping some kind of plastic jug, Kuniyuki’s opening gambit is the weekend’s most ambient moment. It’s quiet and seems far too subtle for this late into the festival and the evening too. It’s not clear where we’re going, but it’s the equivalent of a train pulling out of Waterloo and chugging (no pun intended) very slowly down to Clapham. This isn’t just a nod to beatless sound, it’s a full on 1988 chill-out room’s worth. But just as the crowd starts getting despondent, Kuniyuki begins teasing them. Handclaps here, a bit of conga over there, he starts looping the added percussive elements. And suddenly, 20 or 30 or maybe even more minutes in, here comes the kickdrum. The place absolutely explodes. It truly is a jaw-dropping moment.

As his set continues, it becomes clear that this near-two-hour outing for Kuniyuki is a bit special. In fact, it’s more than a bit special. And it’s beyond mere Convenanza memorable. It’s life-affirmingly good, the kind of thing you’ll tell your grandchildren about. He’s giving it the full hands in the air piano one minute, playing congas the next. It takes in everything from Detroit techno to Body & Soul style Africanism, and the deepest of deep house. When every two-bob DJ and producer is labelling something as “deep arse”, this is the real deal. What’s more, the multi-instrumentalist is showing off his full range. After congas, rinky dink piano, percussion – heck, even sampling the crowd, then looping and playing it, setting off a divine rapturous circle – one cohort said, “What’s he going to do next? Pull a flute out of his arse?”, and within seconds, he was playing the flute. Beautifully. Thankfully he retrieved the instrument from somewhere far more wholesome.

“Even Weatherall was playing the congas.”

I remember being round someone’s house (in the '90s, obviously). They had congas. And played over house records for an entire evening. Like picking up an acoustic guitar, people starting on the congas unannounced and uninvited is not to be encouraged. But when Weatherall joins in as Kuniyuki nears the climax of his amazing set, you tend to go with it.

After a few hours of banging it out in classic Weatherall style, giving it loads on the crossfader, the evening (and festival) draws to a close… As the lights go up and the music ends, Weatherall bows to the crowds.

“Andrew says this one was the best yet.”

I’ll have him right there; an opinion shared by most Convenanza veterans.

As said by everyone on the Internet after the event. See you down the front. 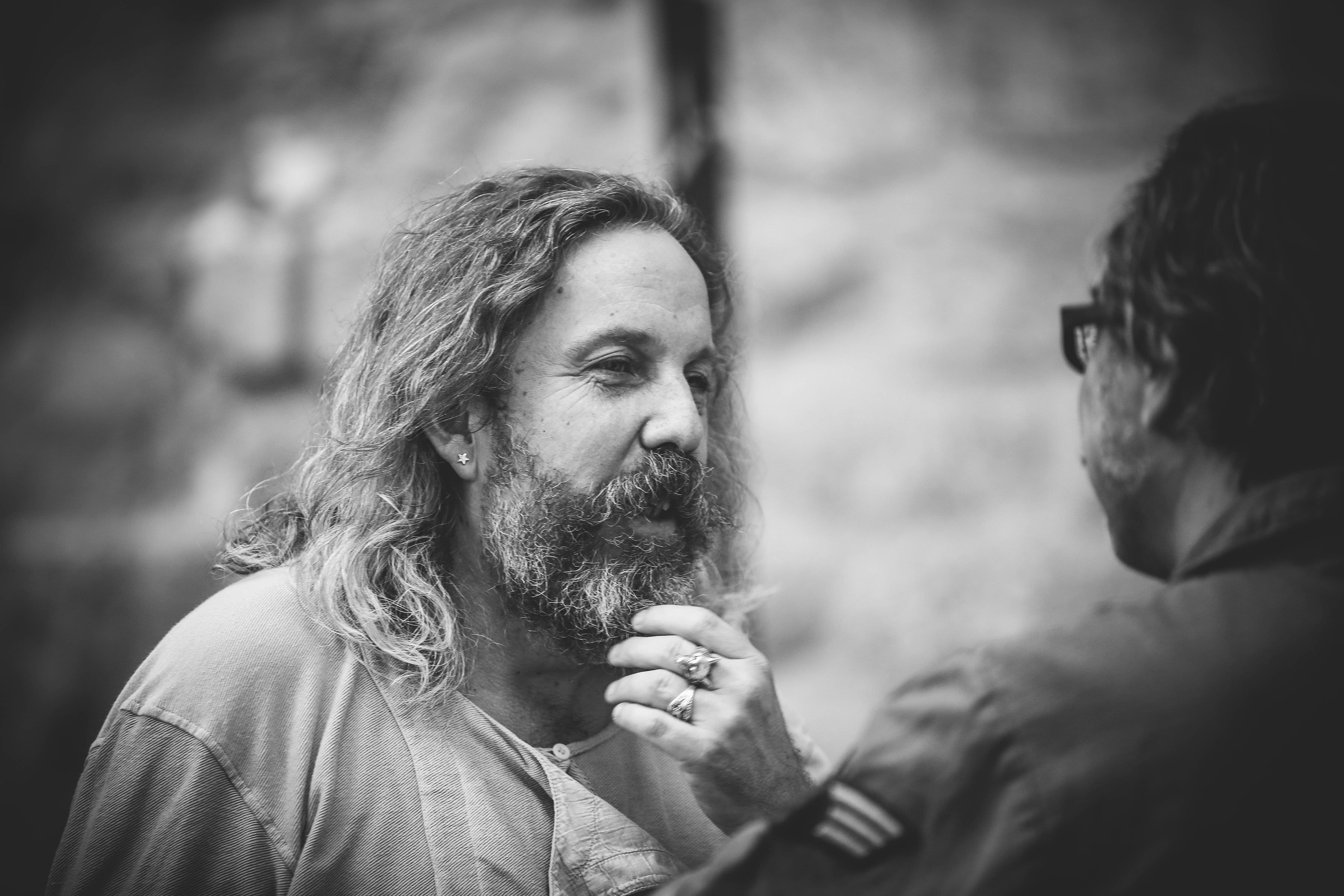