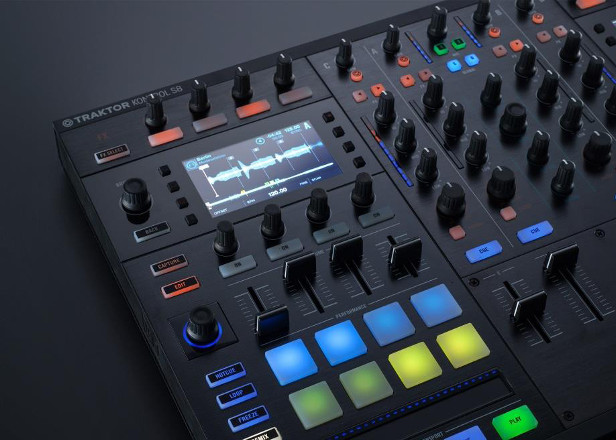 The concept is pretty simple – a clutch of major dance labels – including luminaries such as R&S, Hot Flush, BPitch, Turbo, Minus - have been persuaded to release their new tracks in the stems format alongside traditional mp3/wav releases. Stem tracks have been split into 4 separate parts, typically drums, bass, vocals and percussion/synths. When loaded into the latest version of Traktor (2.9 if yer counting), the stem track appears as normal – as a single waveform representing all four tracks together – essentially indistinguishable from the track in normal mp3 format. When you hit play (or trigger the track with a timecode CD/vinyl) it plays as normal, with all 4 parts playing simultaneously, and you hear the track as you’d expect. However, introduce one of Traktors new hardware controllers, with their 4 separate faders, and you can individually control the volume and effect settings of each of these parts. Get your hands on the Kontrol D2 or S8 and you also get a decent sized screen that shows each of the four tracks as they run along, like so: But, inevitably, there are drawbacks to the system. Obviously not every track lends itself to being stripped down to 4 parts. Whilst Stems is a minimal DJs dream, if you’re playing lush disco epics, or multi-layered trap, the system is going to struggle to offer much more than separating out drums, bass, vocals and everything else. There's also the problem in depth of catalogue. At the moment there's only about 10-20 tracks in the stems format available that I'd conceivably want to play - the situation is similar to owning a video player in the early 80s - it was all good if you wanted to get dumb watching Rocky III, but you were going to have to wait years before you could catch some Pedro Almodóvar. And whilst as a producer you can create and play your own stems, Ableton and (Traktor's remix decks) have allowed that functionality for some time now.

So currently, for producer/DJs there's probably enough going on to warrant buying one of the two bits of kit that works with Stems - the D2 comes in at a bit under £300, whilst the S8 is closer to £700. It's infinitely more fun to use than Ableton (which, I personally feel should never be seen in a DJ set), and very intuitive to use – the ability to remix your tunes on the fly to respond to the crowd is inarguably an attractive one. But for DJs who just play other peoples tracks, I’m not convinced it’s currently much more than a fairly expensive toy. There’s only about 1000 songs available, and if you’re after stuff beyond the remit of Beatport chart busters you’re gonna be disappointed. This time next year though, well, we'll see. It’s early days yet, and I get the feeling that the idea of selling tunes as synced, remix-able components– and being able to sell them for more cash as a result - is going to grow and grow. It may just be that Native Instruments have changed the game once more.