She’s parroted this meaningless alliteration so many times I wouldn’t be surprised to discover that Lynton Crosby has her believing it has some sort of Candyman-esque powers: you can summon Thatcher’s ghost by chanting “strong and stable” 5 times in the face of a dole scrounger. Depressingly, this isn’t far from the truth – or at least that’s what the Tory election machine is betting on. And if we acknowledge this sheer cynicism, it’s hard not to see the use of ‘strong and stable’ – no matter what side of the political fence you sit on - as laying the groundwork for a new low in British politics.

It looks like this poll is bearing me out on this - 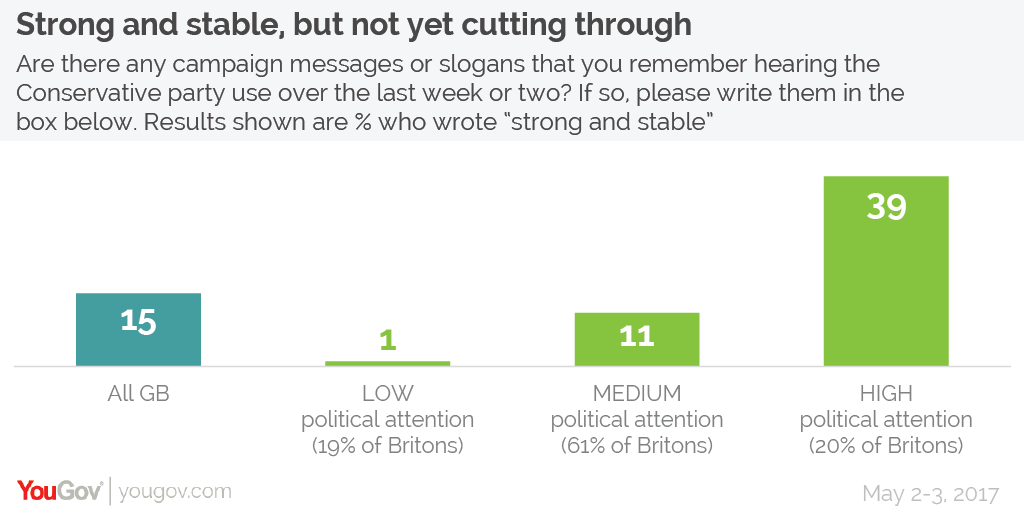 Only 15% of voters are currently aware of 'strong and stable', which means they either haven’t heard it at all, or they’ve heard it but haven’t clocked it’s being battered into their heads - and in many ways I feel the latter is more likely - how else could 6 out of 10 people who describe themselves as 'highly' attentive to politics not recall a phrase that has been hammered home at every opportunity? Unless of course there is another option; there are a whole load of people who claim they pay attention to politics who actually know very little...

I find it deeply worrying that the entire Conservative party – who surely can’t all be irredeemable, amoral fuckers - appear to be going along with this flagrantly cynical ideology. It would be normal to fight an election on issues. To present ideas. To offer people hope, a better future, and a sense of well-being. At the very least, in the past politicians would at least try and glitter the turd. Now I feel like they’re just shitting on the table. If the Conservatives do score a run-away success with the technique they’ve embraced then I fear it signals a disturbing watershed for British politics – what we’re enjoying right now (and I know this is emotive, but facts is facts) is some entry level fascism. I know some clever prick out there is all set to go on about Godwin’s Law, so here’s a burst of Goebbel’s famous speech on propaganda;

Ummmm.. Sounds familiar…? Still, I’m sure it all worked out just fine last time this happened :)