View From The Side: Has Track ID Culture Gone Too Far?

An endless quest for identification and a wasted moment...

View From The Side: Has Track ID Culture Gone Too Far?

An endless quest for identification and a wasted moment...

Selection: a fundamental element as a Disc Jockey.

You can have all the timing in the world, possess NutriBullet-esque mixing ability, and know your tracks like the back of your hand. However, if your selection’s off, crowd reactions can be stifled and atmosphere can be buried. Whilst it is commonly conceived that human beings are scared of the unknown, disc jockeys often disprove such rationale with their white label wax and obscure, unheard sonics.

“What the hell is this?!” – my brain in response to yet another novel noise blurting out of a soundsystem.

“I NEED this” – my brain’s logical next remark.

We’ve all been there. Once that rumbling sub engulfs and consumes the club, or those captivating claps claim your ears’ attention, an obvious question is raised…What is this?

In the digital age, technological innovation has led to camera phones capable of crystal clear documentation whilst online forums connect like-minded individuals. In combining the two, we now have another dimension of musical revelation, one that is far broader and comprehensive than your mate dancing next to you. Whilst they may shrug or shake their head, the internet can answer your prayers.

A double edged sword, an undoubtedly helpful tool, yet not without baggage.

Signs stating “No Phones On The Dancefloor” are becoming more and more common in clubs. Is this as a result of our increasingly digitised society, with ravers ‘dancing’ the night away through screens? Or perhaps as a means of achieving an increasingly connected dancefloor community, galvanized by interaction and energy? Is it simply the fashionable thing for club owners to do, making their venue ‘underground’ and ‘Berghain’ esque? Realistically, a combination of these hypotheses contribute towards the decision to display such warnings, though the influence of phones has motivated such choice. Identifying music is thus guilty by association.

Under the disco ball, strobe lights flicker and spark with bright white light, intensifying the music with disorientation. Scything through the dark, these bursts of light are welcome disruptions to the blackness…

Flashing cameras filming moments of euphony do not.

I’m not saying it’s unacceptable to whip your phone out and take a video every now and then – who am I to tell you how to act in the club – but there are ways to do it.

Does the DJ have to be the focus of your clip? For starters, filming the floor is just as effective as filming the DJ when documenting a new tune. Context is helpful, and you may forget who played what song, however this is not imperative. Voice notes can be just as effective, and auto-Shazam could be your solution, too. That Green Heineken may have muddled your perception, but if the moment was that electric, it should probably stick long in your memory. Additionally, put yourself in the shoes of the disc jockey – would you like a blinding light shone straight into your eyes whilst concentrating?

Flash is unnecessary. Similarly is shoving your phone under the DJ’s nose but let’s not even go there…

The crowd is a vital component to the overall experience of a night out. Looking around to see you’re the only one losing the plot and dancing your socks off is depressing, if not a little embarrassing too. Boiler Room streams highlight this – dead, unresponsive crowds, fixed to their black mirrors whilst sucking energy from the performance at hand. Ask any old school raver, raised on the free parties and warehouse shindigs of the glory days, and they’ll tell you about the collective body of people connecting and interacting under one roof. The lack of phones may well be the reason for this, but then again, the ecstasy was good and the drinks were cheap.

On a serious note, though, phones definitely have the capacity to drain energy from the dancefloor. Constant filming leads to still bodies, reacting to the music through technology and social media rather than in spirit The club experience was built upon shared moments, going wild with your friends and escaping reality. Phones are something of a paradox: posting your video online saves the moment after it’s happened but kills the present.

Even so, how else are you supposed to document that tune you know nothing about? Differentiating between two snares or describing a bassline without aural aid is tough, nigh on impossible work. Unless there are some lyrics, Google isn’t going to help you find that ‘beeping-bleeping’ melody. Videos (or voice notes) recall the sounds and details you need, providing a portal back to the original experience. Re-live that moment, remember that feeling. Sound quality may not be great, but it’s better than wearily humming a track lost to the depths night.

Videos are undoubtedly more accurate and easier to decipher than words or vocal recreations, but the internet is a powerful place. Online groups such as the Identification of Music Group, 4TheTrax and We’re Going Deep Track IDs have proven priceless in both senses of the word.

Take this long shot above. Read it aloud, imagine how it sounds. I dunno about you, but “deeeeer – der der der – der der der” doesn’t give much away. How would this song have been identified without the knowledgeable community constituting the online music fanbase? This network of ‘heads’ hails from all walks of life, comes from the four corners of the globe and takes part in scenes you didn’t even know existed. Chances are someone from one of these groups was at the same club, listening to the same set as you were. Does this seemingly all-knowing bunch of music aficionados justify attempts to banish phones from the dancefloor? If a nonsensical cluster of consonants and vowels can be translated into tunes, do we need video documentation of those unfamiliar sounds? Miracles do happen, but don’t get ahead of yourself. 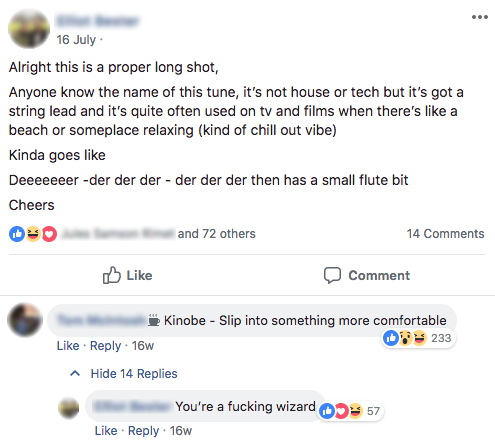 ‘Community’ can also be a bit of a misnomer. Snobbery and pretentiousness are common traits unfortunately exhibited by individuals and through thematic genre bashing. If you’re a tech house fan, or have a penchant for EDM, don’t even think about posting your request! Stepping into my group with your inferior taste – who do you think you are?! Entitlement is a damaging byproduct of these online forums and groups, as individuals feel the need to shun genuine posts for a cheap laugh. Evidently, everyone enjoys different music, and having such varied taste is what makes these groups so effective.

Hypocrisy, too, undermines these groups’ worth. Members often forget how their taste evolved, punishing enthusiastic contribution because it’s not ‘headsy’ enough. I’ll be the first to admit that Hannah Wants soundtracked my early sixth form days as my friends and I were beginning to discover dance music. Over time, new genres and artists reveal themselves after journeys through Youtube algorithms and club experiences. Not everyone is raised on mysterious B-sides and 90s rave tapes, and popular mainstream music is a source of enjoyment for many club-goers.

Technology is the catalyst of this debate, as club spaces are filmed, footage shared and tracks identified. How we use technology, then, is the determinant of ID culture. I don’t believe that ID culture has gone too far: supportive online contribution and friendly, unobtrusive documentation make up the majority of practice. Those infrequent episodes of unnecessary maliciousness and incessant camerawork, however, do take its toll. Enjoyment is one thing, but enjoyment at the expense of others is needless.