McDonalds have made their new mascot scarier than Ronald. And they said it couldn't be done.

McDonalds have made their new mascot scarier than Ronald. And they said it couldn't be done.

This week Maccy D’s did an amazing thing; they managed to come up with a mascot more terrifying than Ronald McDonald. Think about that. Ronald McDonald was a clown (already scary) who chased after kids with his hands encased in over-sized tickle gloves. Oh, and he only ate Big Macs. And maybe the occasional apple pie. So, let’s recap: Ronald was a burger munching kiddie chasing freak in garish make up. He belongs in the dark world of your Saville’s and Clifford’s, and I’d say a good reason that McD’s have come up with a new mascot is that Operation Yewtree have had Ronald banged up for a list of heinous crimes stretching back decades. Just look at him in action:

Brrrrrrr. So, anyway, Ronald was pretty off key. Now, the world’s biggest provider of nutrition-less scut that satisfies no one but still manages to dick over large swathes of the planet in the process, have come up with a new mascot. Here he is: 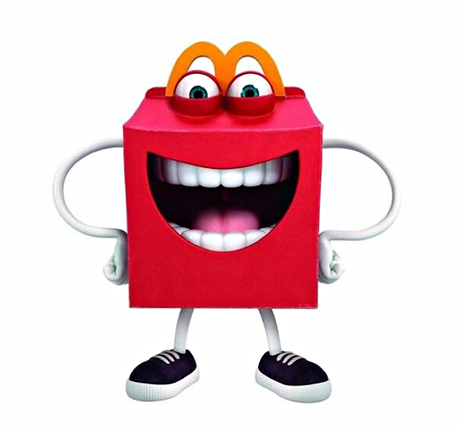 I may be missing something here, but this appears to be a happy meal box with human teeth. Just think about that for a moment. Why does the box need teeth? WHY? WHY??? WHAT THE FUCK DOES HE EAT!!!?? Because from where I’m sitting he eats one of two things

Is either one of these options a good thing? Maybe, just maybe McDonald’s are coming clean, and subliminally reminding you that eating a Happy Meal will lead to nought but a cold gnawing sensation chewing away at your core. Although I can’t imagine the board room conversation that led to that decision. Alternatively they’ve just focus-grouped a bunch or random shit kids like and jumbled them together to create Frankenbox, your toothy, terrifying new friend. He’s a bit like those horrific signs you see outside old school butchers, where they paint a pig dressed up as a butcher, as though he’s about to flog you a lovely slab of gammon lopped from his own arse. One guy on twitter has it nailed in less than 140 characters:

.@McDonalds @winnersusedrugs That is not right with God.