We pay tribute to the retiring Jeremy Paxman, a giant among gnats

We pay tribute to the retiring Jeremy Paxman, a giant among gnats

After years of terrifying politician bastards with his acidic concoction of barely concealed contempt and hair trigger bullshit detector, Jeremy Paxman has announced his retirement from Newsnight. Gutted. For years Paxman’s been there, a simmering bully in a cheap suit, the cynical misery from the corner of the pub gleefully dishing out verbal back handers. He pierced the squirming platitudes of trough snouting MPs, glowered at public servants, and resolutely refused to show anyone the slightest modicum of courtesy. Whilst TV around Paxo has degenerated into PR soundbites and shameless bum licking, he remained the authoritarian, wrist slapping headmaster of Britain; firm, probably not fair, but constantly righteous, and always entertaining.

Look at his greatest moments - from asking Tony Blair whether he and George Bush 'pray together', to the sheer, classic belligerence of asking ghoulish daywalker Michael Howard the same question a full 12 times, a pitiless attack on the kind of slimy evasion lesser men would let slide

(skip to 2.55 for the excruciating assault)

There were times Paxman provided a valuable public service - from forcing the European head of coca cola to acknowledge the level of sugar his drink contained, with Paxman emptying a mini mountain of sugar sachets on the table between them and then, outraged, waving the empty cup like a cardboard battle axe, to effortlessly pulling apart Tommy Robinson's racist EDL claptrap with a series of blunt, pertinent questions ('Have you actually read the Qu'ran?') - he was saying and doing the things we dream of our presenters saying and doing - as Paxman himself put it - "I ask the question that the average, intelligent viewer would like to be asked". Paxman could even (kind of) do funny, wryly addressing Dizzee Rascal as Mr Rascal in the wake of Obama's election. In one of my personal favourite moments, he accused a pontificating Sting of hypocrisy, asking the clearly pissed off singer whether he ever felt 'uncomfortable travelling between your various homes in various continents, at enormous carbon cost?' Watch Sting - a man reputedly rarely seen without a small army of Yes Men - barely contain his rage...

It's hard not to concede that Paxman may have been the greatest political interviewer of our time. Whether he is or not, he will be missed, sorely missed. Now he's gone, look at what we're left with: 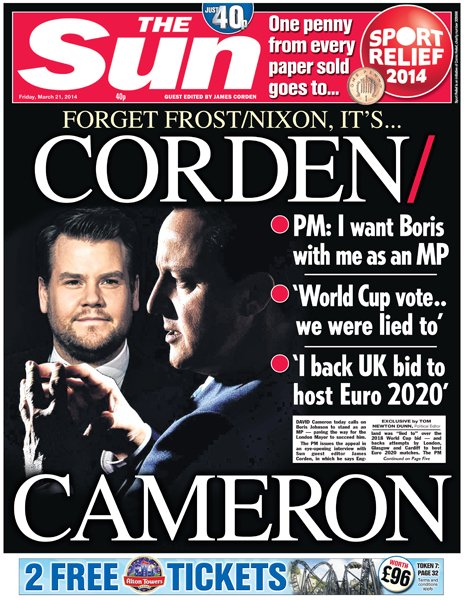 Jesus. The iconic memory of Frost/Nixon reduced to a natter between a featureless Thatcher-bot and a deeply insecure man who made the worst football song in living memory (no mean feat). We're clearly not flooded with outstanding current affairs coverage.

In fact if anything, I'd say that our current mendacious times, where politicians have given up almost the slightest pretense of honesty, bankers award themselves bonuses for driving their business's into the ground, and public services are flogged off cheap for illicit private gain, we need the wit, intellect and sheer bloody anger of Paxman more than ever. He leaves big shoes, and he's put in years of sterling service - Paxman we raise a glass, you are always, always welcome at our disco. Now let's enjoy some classic moments again: