Tropical Animals have been providing musical services to the good people of Florence for 10 years. Their mission is to bring some of the world's most respected artists to their home of Club 21, week in week out, and maintain an intimate, inclusive and safe space to party. Their events aren't centered solely around the music but the experience, an exchange of ideas, cultures and stories between guests both local and international.

Adding a label arm was a logical next step for Tropical Animals and since launching last year they've welcomed artists like The Cyclist, Daniel Baldelli and Whitesquare, and now they're gearing up for the release of their first compilation, Rave in a Cave, which celebrates the music of their close musical friends and family.

Here they take us on a jaunt round the places and spaces that have been important on their musical journey...

The ancient Romans gave to this little spot (where actual Florence stands) the wishful name of Florentia (you may be blossomed), as it was green and full of flowers. The word Flos / Floris (flower) was modified to Fiore, so in the medieval Italian language Florentia became Fiorenza and then Firenze.

It’s hard not to be overwhelmed by the beauty of this relatively small city. Millions of tourists swarming the streets like bees in a beehive and it's popularity is not surprising - the city contains over 60 per cent of the world's art heritage. Historical buildings everywhere attract your attention, yet the Dome of the Florence Cathedral always wins. This is a partial city view during a rooftop party we did along with the legend Daniele Baldelli. 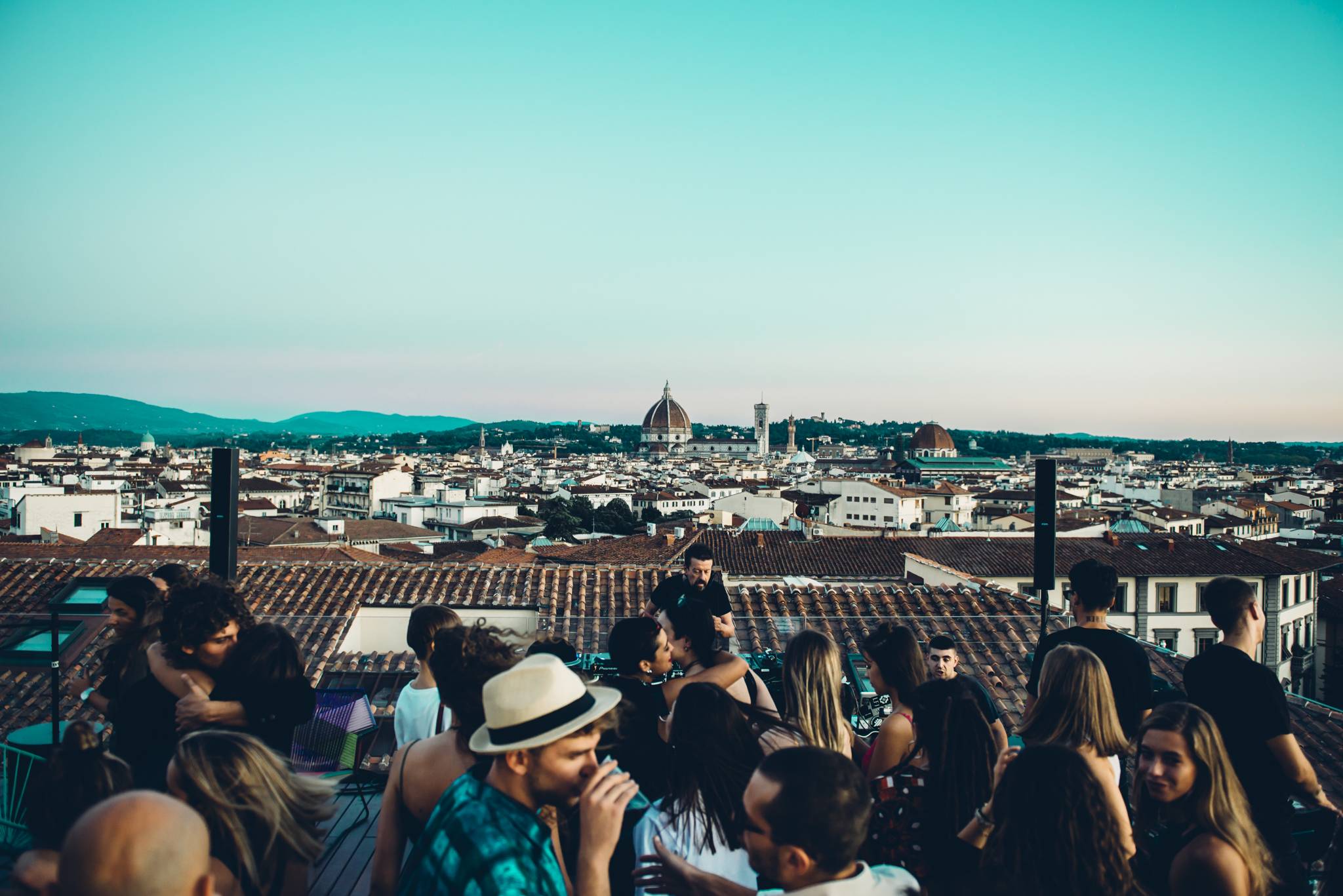 In a perfect combination of passion and beauty, one of our favourite places is Move On Record Store. Here you can find an outstanding selections that you wouldn't expect in such a central position (of course you can find our label releases here), plus collectors and rare items and new and second hand records. Listen to them while enjoying the amazing view of the Baptistery of St. Giovanni and the Brunelleschi’s Cathedral. 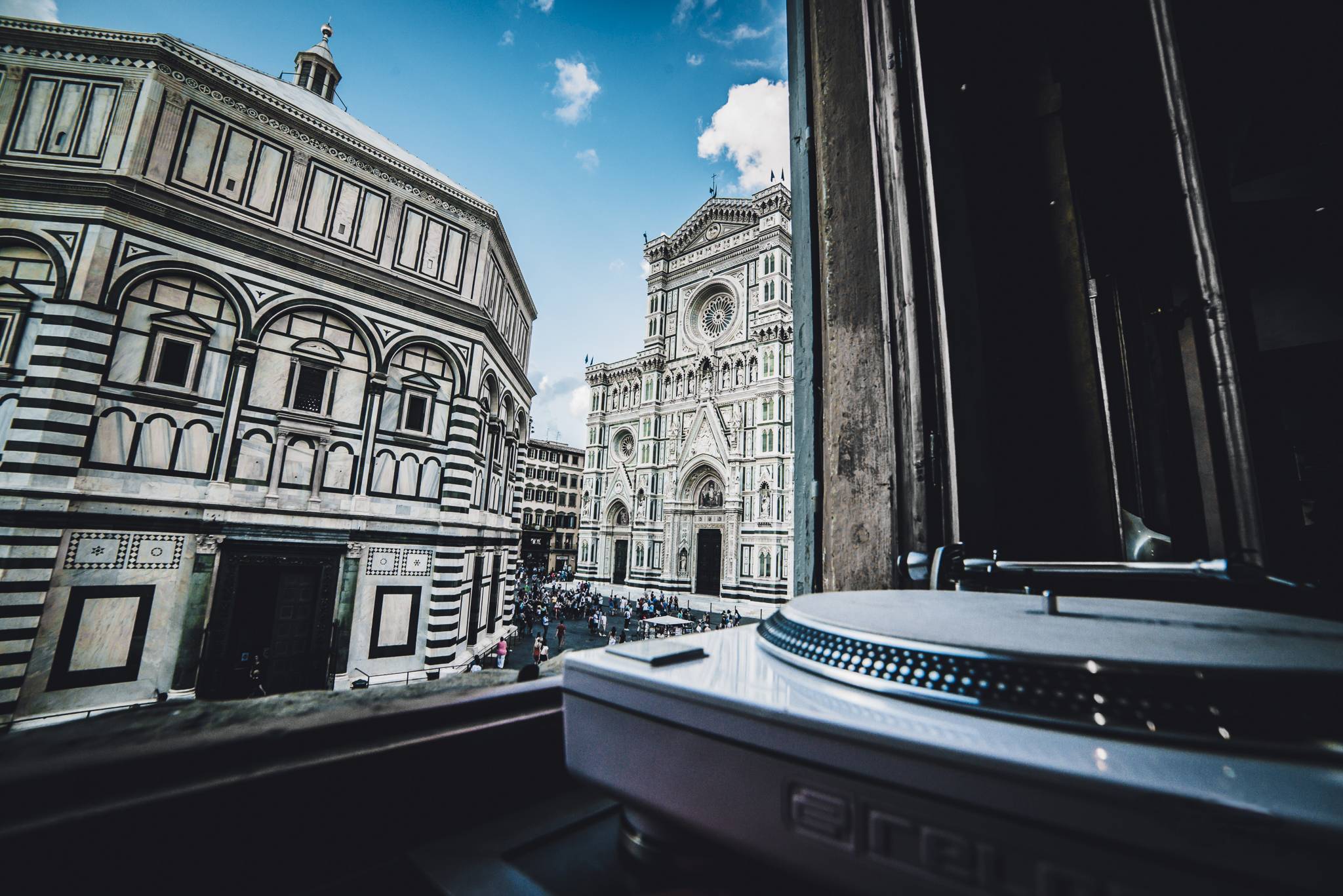 We occasionally organize DJ parties at the record store floor, and between a dance and a dig, you can grab a beer at the pub downstairs. Great and must-see place. Another record store that we've also loved over the years it’s Danex Records, outside the city center, just behind the beautiful 19th-century piazza Savonarola. Exclusive releases and an amazing supply of DJ equipment. 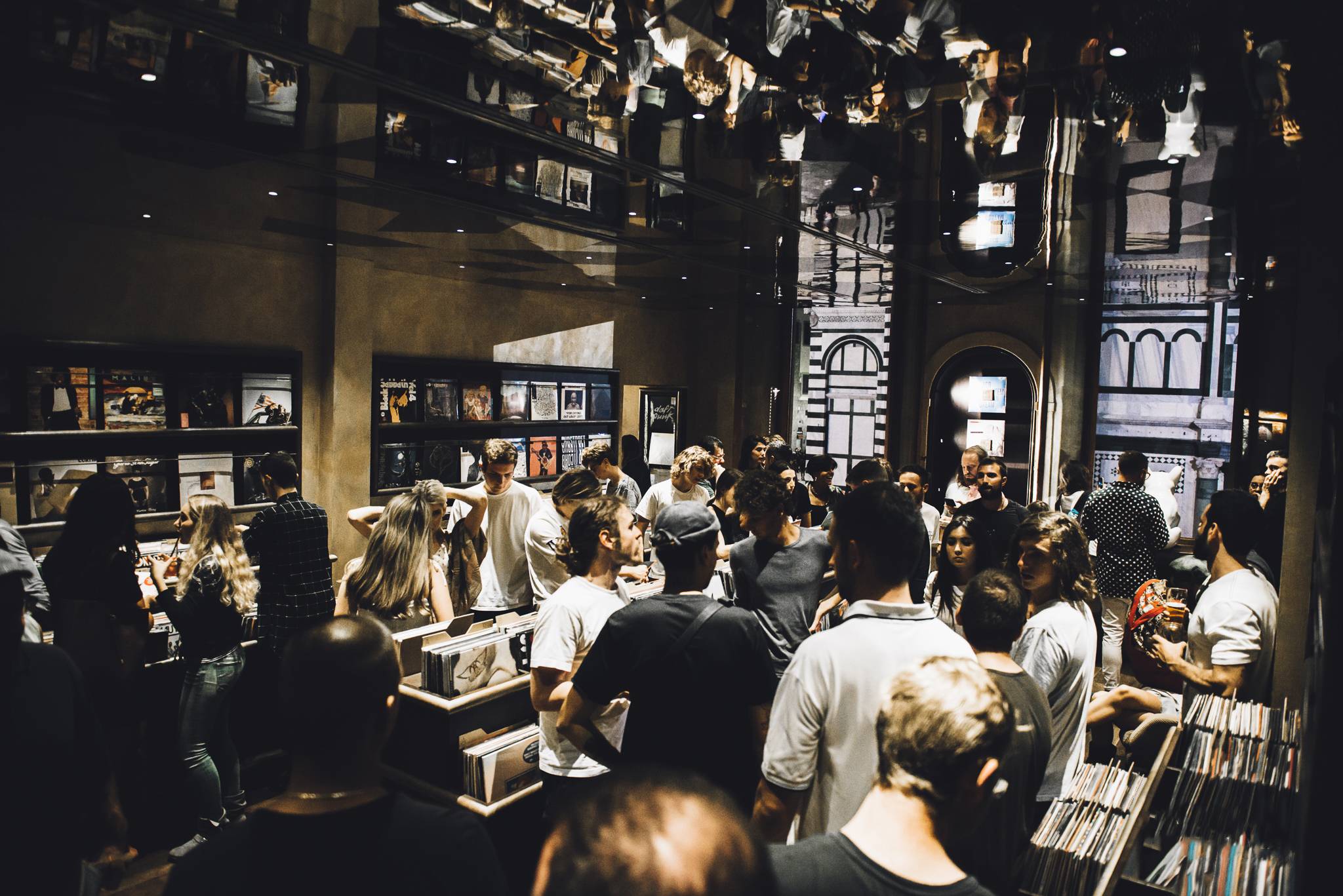 Besides the club, we always love to find nice spots for new events and partnerships. Société Anonyme, an amazing clothing store on a quiet corner of the Sant Ambrogio district, is a rather unexpected shop and a shining example of how good chemistry of ideas can lead to great results. Here is a pic of some of our clothing line named “newravers” inspired by our last ten years clubbing experience, created with Societé Anonyme. 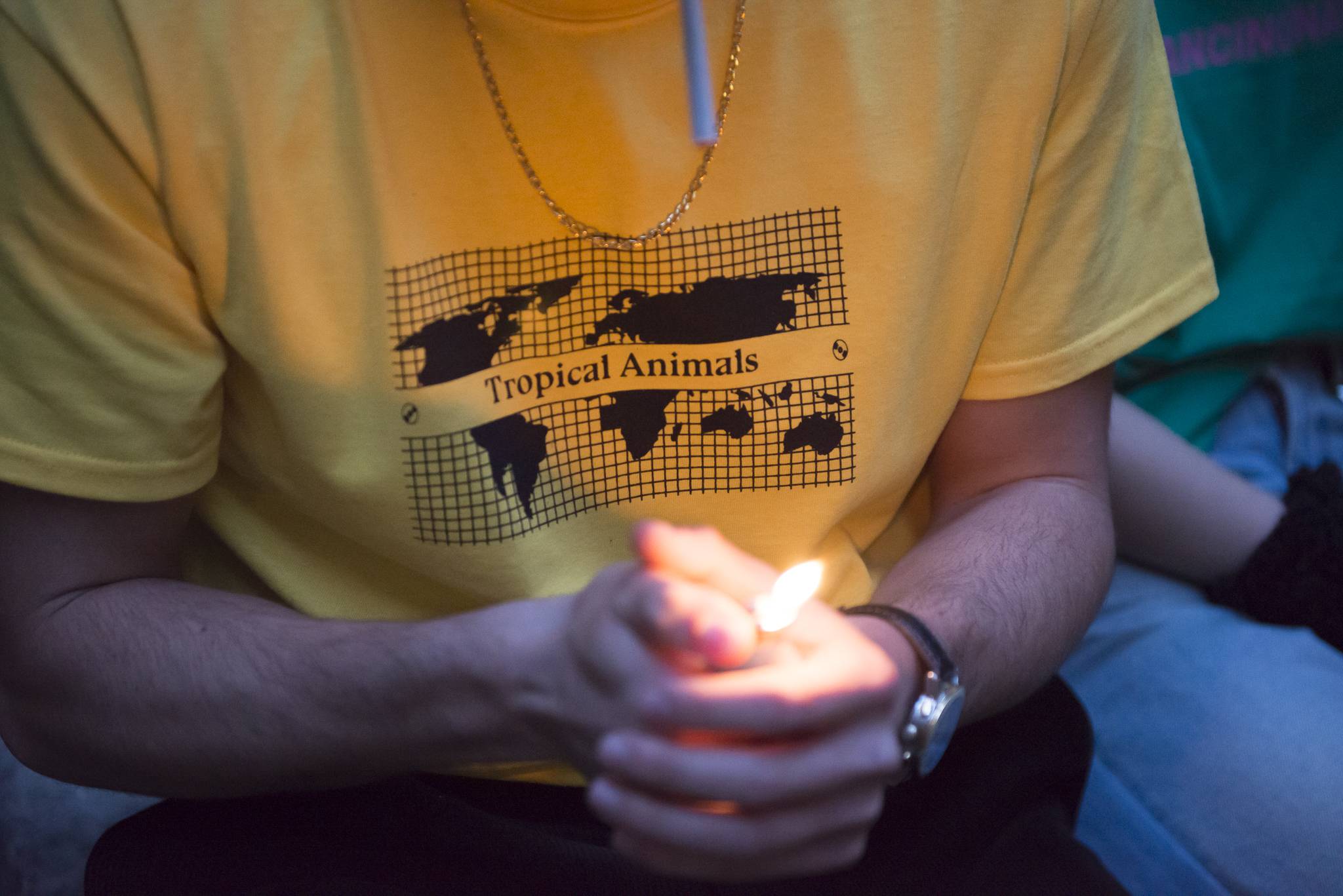 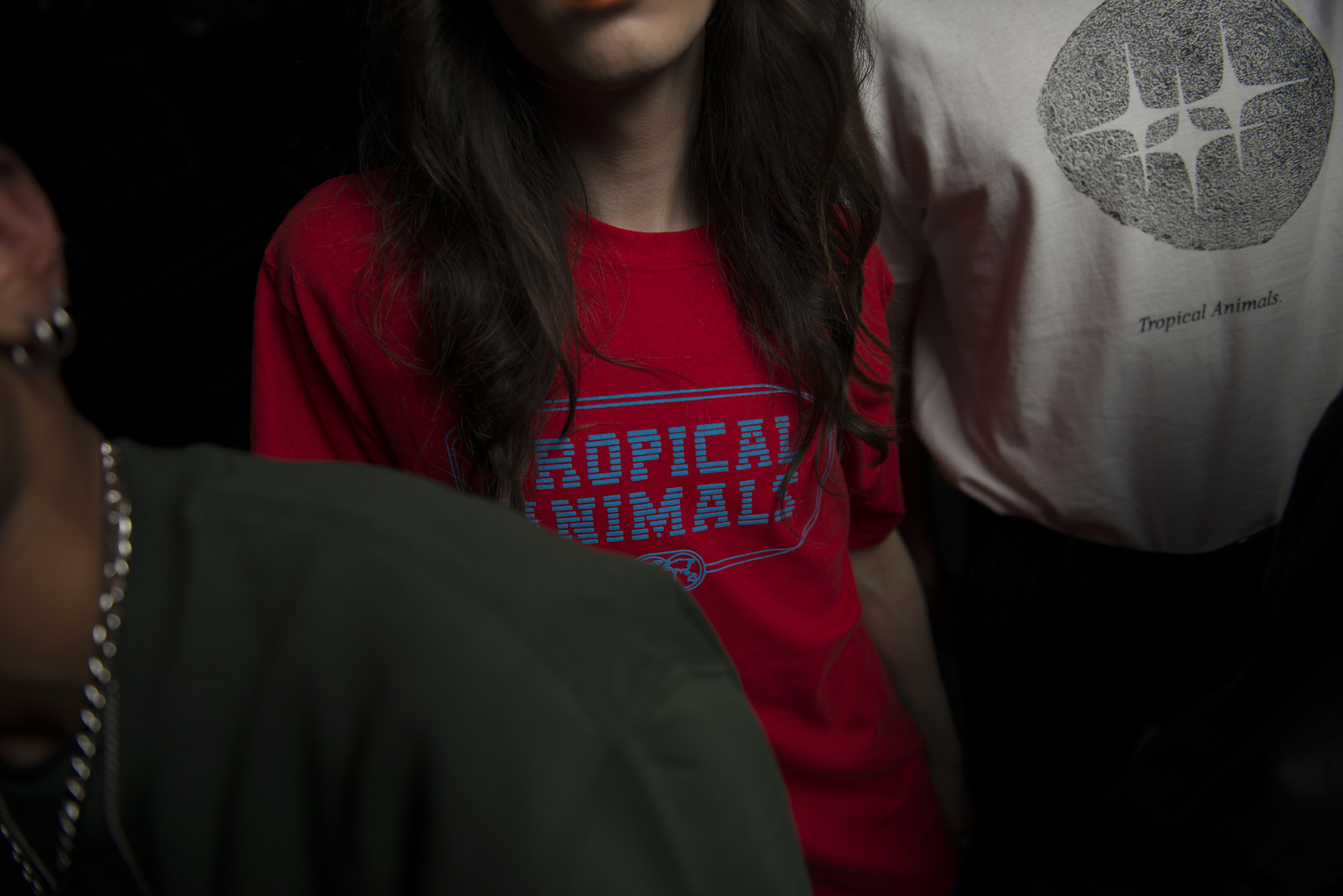 Another place we really like is the “Ex-Manifattura Tabacchi”, built by Pier Luigi Nervi and Giovanni Bartoli between 1933 and 1940. It used to be a tobacco factory and consists of 16 buildings covering 100,000 square meters. The factory closed definitively in 2001 and only a few private events have been organised since then. Last year a private company decided to redevelop and bring it back to life. Today it is an innovative space with Bistrot, exhibition spaces, shops selling art and craft products, workshops, co-working spaces, DJ set or concerts area. Here we celebrated Tropical Animals’ 10th anniversary with a proper party. 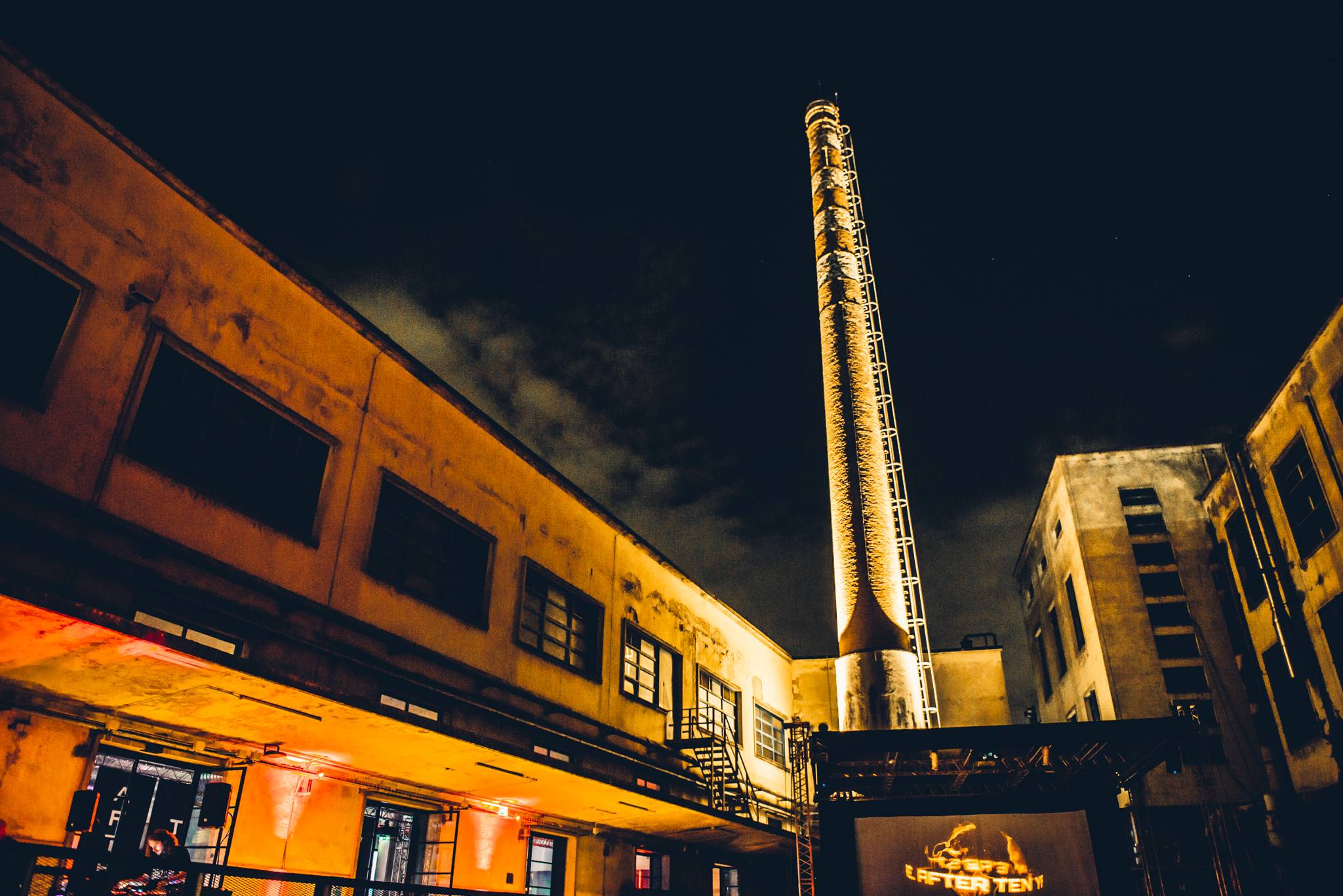 Something curious to note while walking around the city center are these tiny windows, located on the facades of some ancient palaces. These small holes are easily recognized: they have the shape of a small arch, decorated by a dropped frame and closed by a wooden shutter. They are called “Buchette del vino” or wine windows. Their origin dates back to the end of 16th century, when the trade in textiles, fundamental for the Florentine economy, encountered the competition of the northern countries. The nobles, the bankers and the Florentine merchants decided to expand their business, investing their capitals in cultivating grapes and particularly producing wine. The small “buchette” were an early application of the method “from producer to consumer”, without mediators, such as taverns. The little holes were placed on the ground floor, close to the wine cellars of the palaces, to allow a quick and easy sale. You can see them in Strozzi Square, in Proconsolo street, near “Badia Fiorentina” church, in Dante street, in Belle Donne Street, in Borgo Pinti and near S. Pierino arch. Most of them were boarded up after they fell into disuse, but about 100 are still there, ready to be spotted by an attentive eye. The funny thing is that this renaissance tradition became popular again and some places decided to make their own buchetta and sell wine in the very old school way. 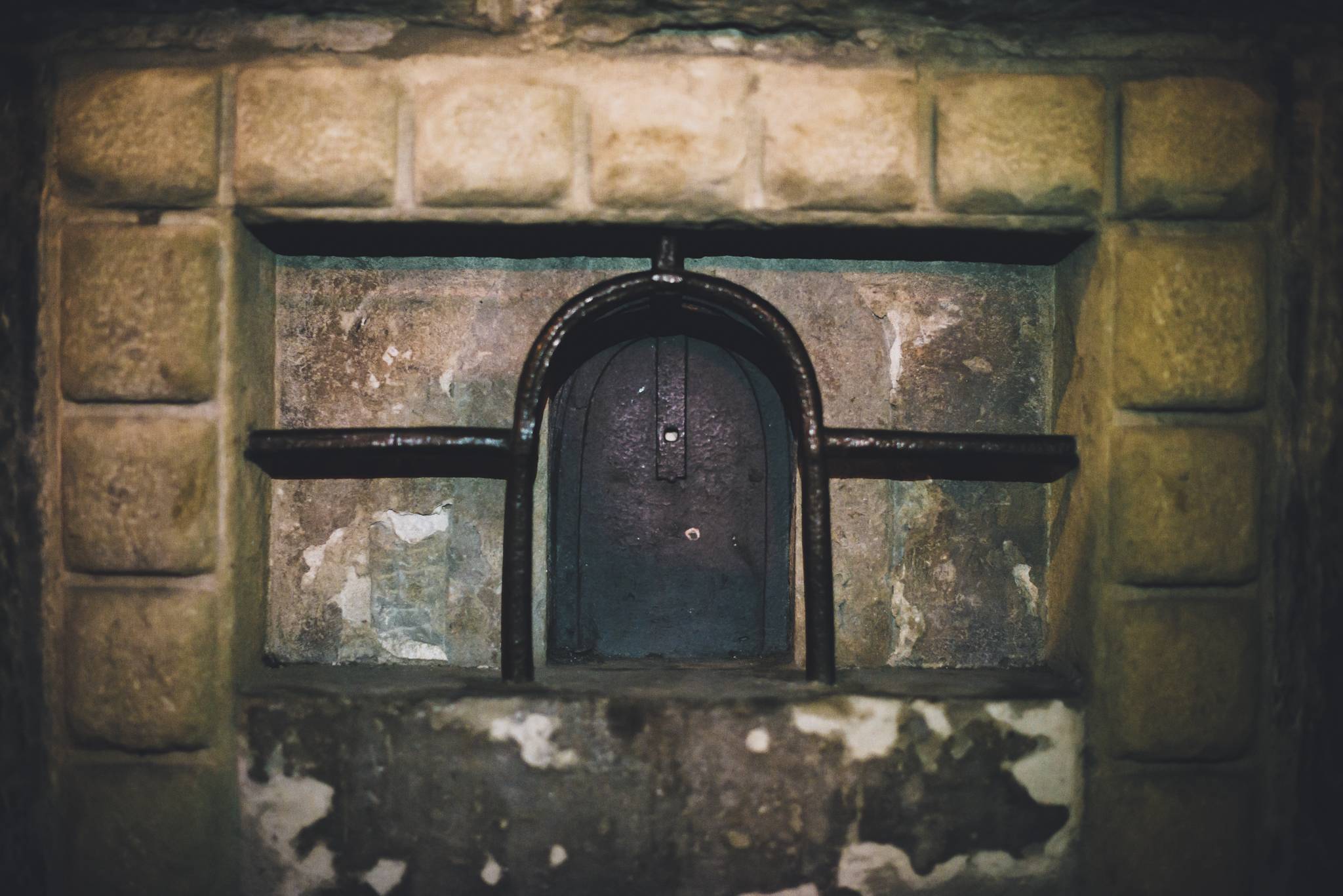 Night is near, and a sunset at Piazzale Michelangelo is a must. If you think Florence is beautiful by day, just wait until you see it sparkle at night. The glow of the city lights illuminate the iconic structures that create the unforgettable skyline of the towers and the dome. 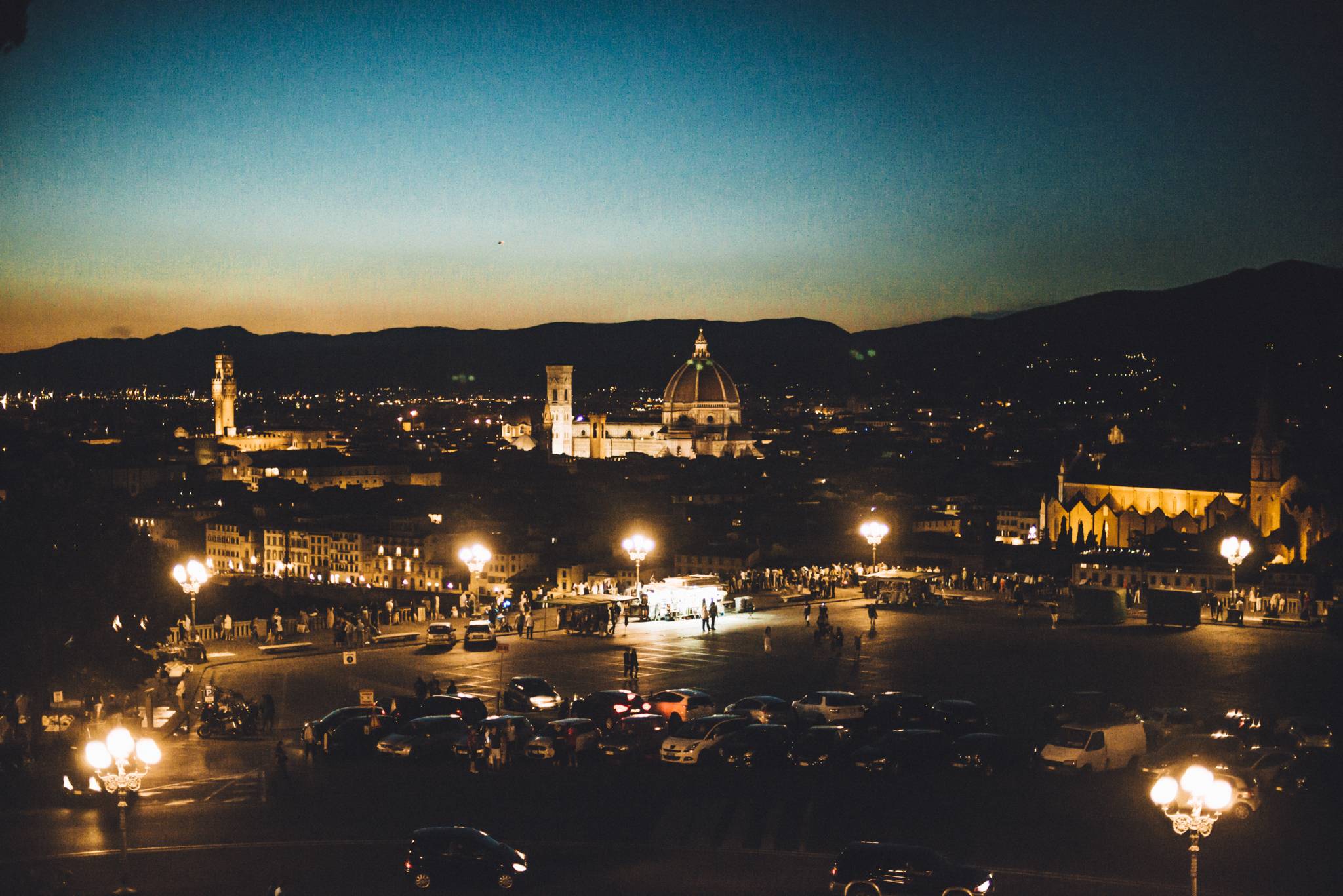 And the Ponte Vecchio stands as a shining beacon connecting the two sides of the city, very close to our party-cave. 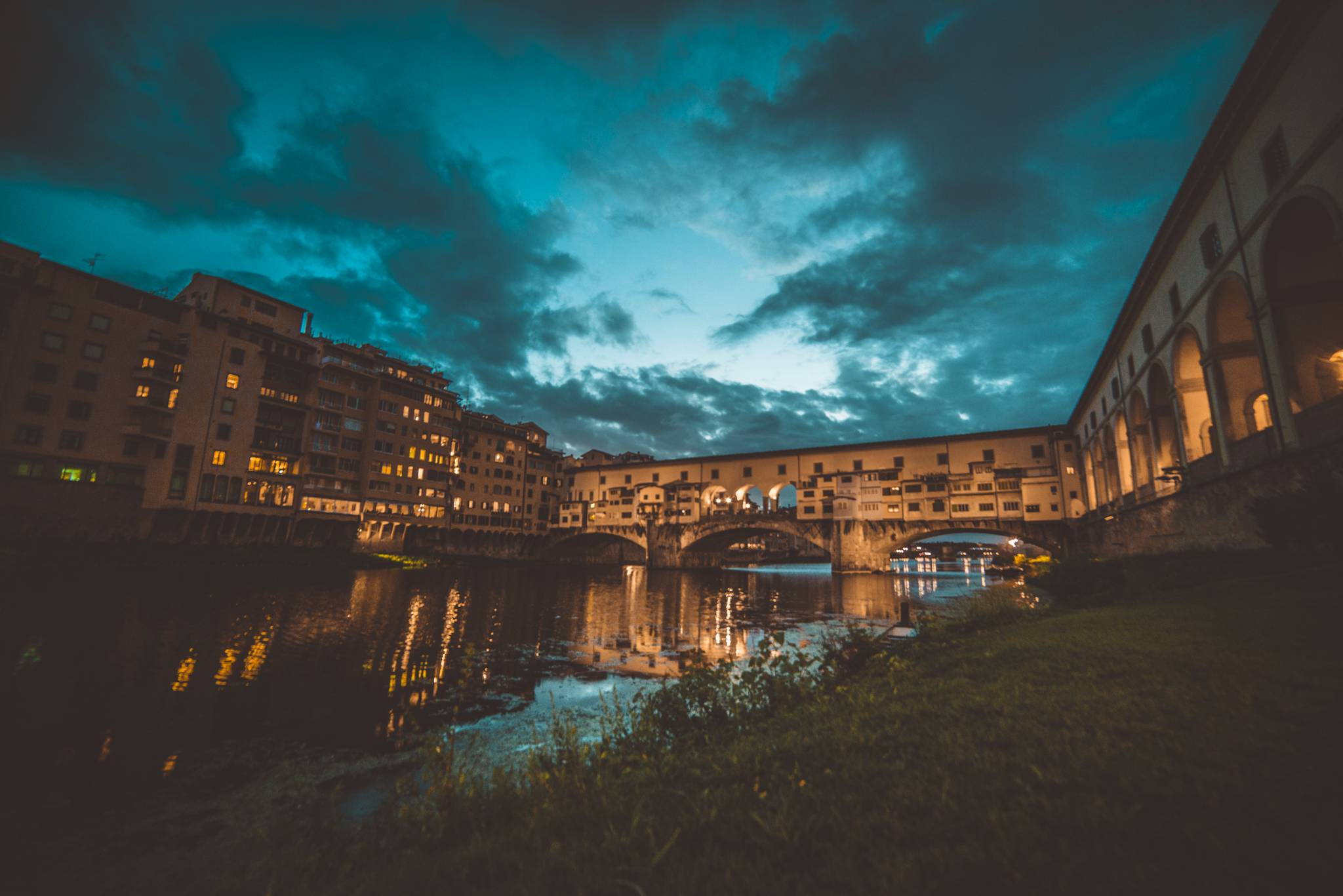 The Club 21, our home every Thursday where we brought the elite of dance music world to Florence since 2010, like Bradley Zero, Avalon Emerson, Bambounou, Chez Damier, Luca Lozano, Interstellar Funk, Ross From Friends, Vladimir Ivkovic, Pional and many more. The place is really in the heart of the historic center. It’s nice to step out from a typical trattoria after a real Florentine Steak and good wine for dinner, walking through history and letting art and beauty overwhelm you and reach our cave with a five minutes walk. Deus ex machina of all of this is Ricardo Baez, artistic mind of the party, DJ, and the creative inventor of the club wear in collaboration with Societé anonyme. Michael Byrne besides being resident DJ along with Gaiden, Nero Zang, Mystic Valley and Cora, is the other head of the Label and Tropical Animals A&R. Very soon (November 29th) our sixth release will be out as a compilation of residents Djs plus some special guests who already played with us during the years, like The Cyclist The Analogue Cops or Elisa Bee. 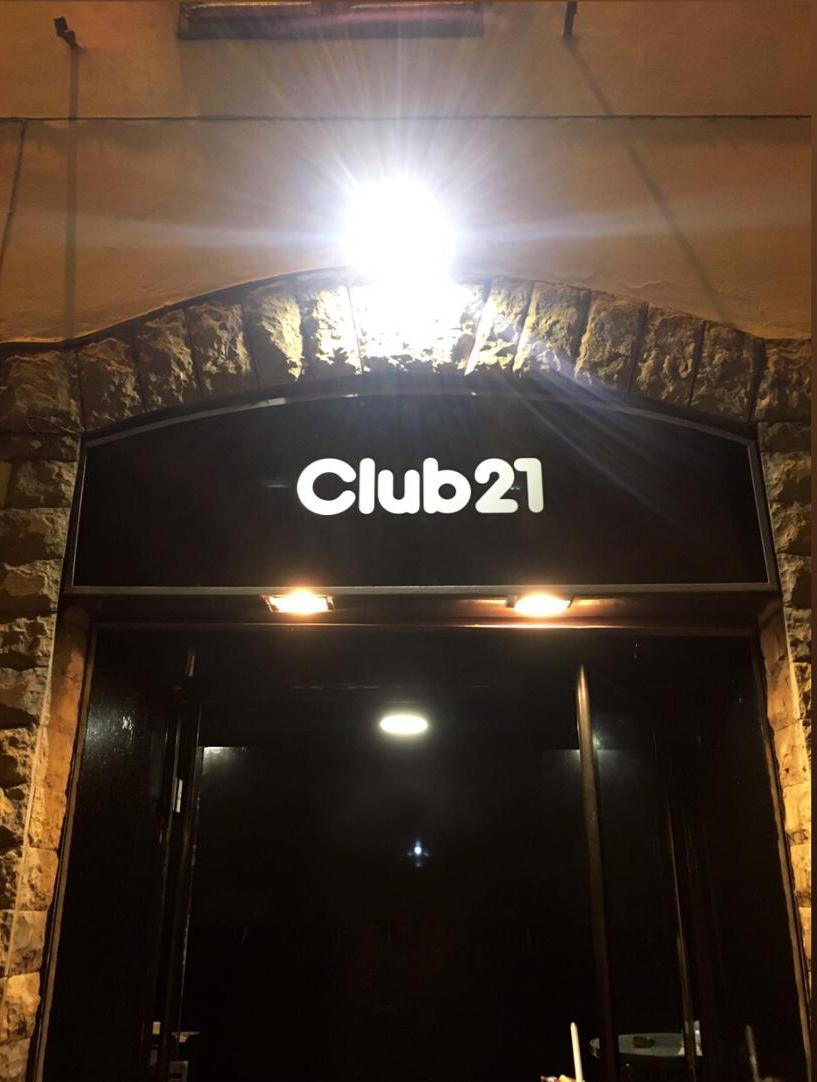 Even if the club in an absolutely central position, around and over our heads there are only business premises, so we can benefit from a proper sound system and punching dBs. Years of research as DJs and working on bookings inspired us to create the label as a natural next step, while our current musical choices are made as the direct results of our artistic journey and experience with parties.

It often happens, after a big night, to recover energy we eat one of the most traditional dish in our town (sorry veggie friends). The Panino with Lampredotto since the 1400s started as food for the poor as it’s made from throwaway scraps (tripe, from one of the cow’s four stomachs – the abomasum.) Despite this, over the centuries, it’s become a real must of our cuisine, dearly loved by residents. A real institution here in Florence. The name comes from the word ‘lampreda’ meaning lamprey, a highly valued eel that once lived in the waters of the Arno and was eaten by the wealthy. The tripe used for lampredotto is rough in texture and resembles the lamprey eel, which the ordinary people of Florence couldn’t afford. So the name lampredotto, takes its cue from that other expensive and unattainable food and has the double meaning of emulation and teasing, in keeping with the Florentine sense of humor. Lampredotto is traditionally eaten as a sandwich, on a soft white bun, called a semelle. It’s often served with a green sauce (made from parsley, hard boiled egg and capers) and a spicy sauce. Lampredottai (as the lampredotto sellers are known) can be found in their kiosks throughout the streets and squares of Florence making and serving these tasty hot sandwiches. 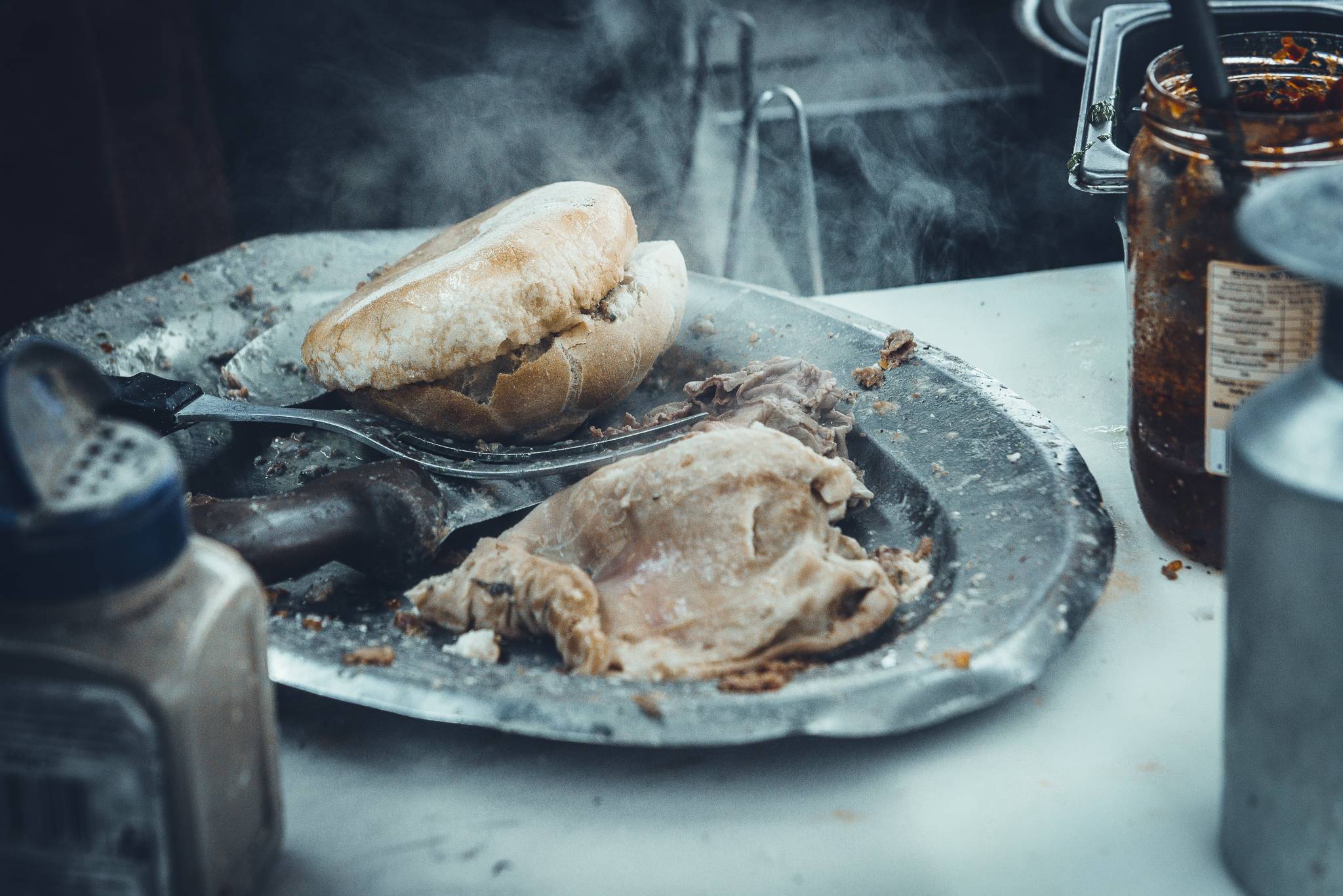