The other week whilst out running, I passed this parked white van with loads of handmade, creepy dolls on the dashboard. They were too good to ignore, so I stopped to have a chat with the man behind the wheel. It turns out he sits there making them all day just to pass the time, alongside papier-mâché shrunken heads and weird wands carved from roadside twigs.... Outsider art art at its finest, done simply for the love.

This is Steve's story:

I’m Steve, I’m from Romford, Essex, and I’m weird. I work in traffic management - temporary traffic lights, road closures, diversions... but I get bored in the van. So much of my job is spent waiting for either the client to turn up or for them to get permits. I have a lot of hours to kill - about 8 hours a day sometimes. I can’t do the Internet cause looking at the phone just fries my brain, so I started making these things.

About 9 months ago, someone left a normal dolly at the back of my van. I had some plasticine in my bag that my daughter left out so I just made it look … pretty. People took interest in that first doll so I thought, I’ll make another one, and then another one and I’ve now made over sixty!

I moved into shrunken heads via Harry Potter. I saw those and thought, ‘I could do that’. The wands too. I make them from twigs I find along the road so they don’t cost anything. It’s like therapy. I sit in the van with a stick and just strip the bark off, carve and let the wood take whatever form… it’s lovely. I did get pulled over by the police once though. They were very suspicious. One of the dolls was holding a little knife so they confiscated that, but they couldn’t find a proper reason to arrest me. 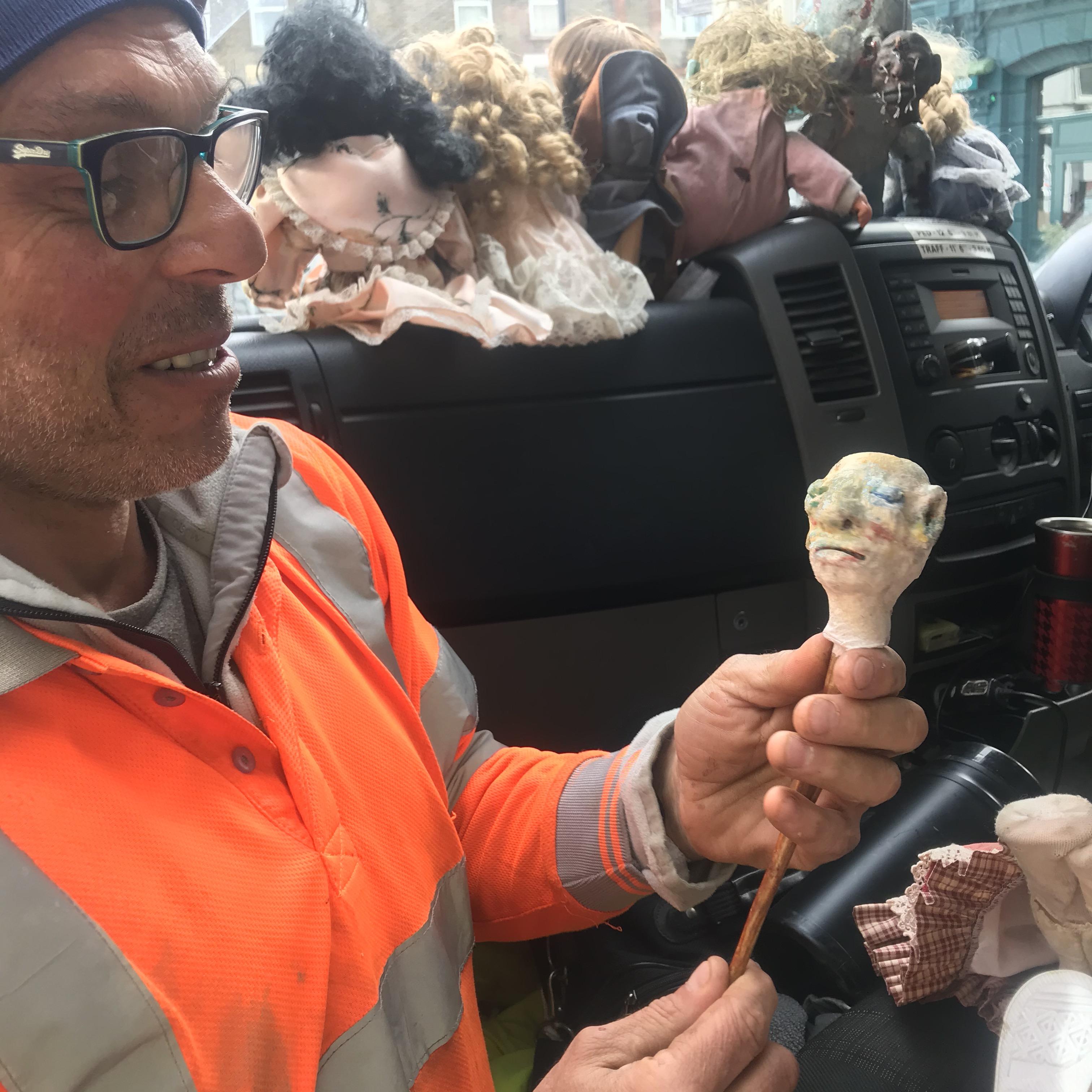 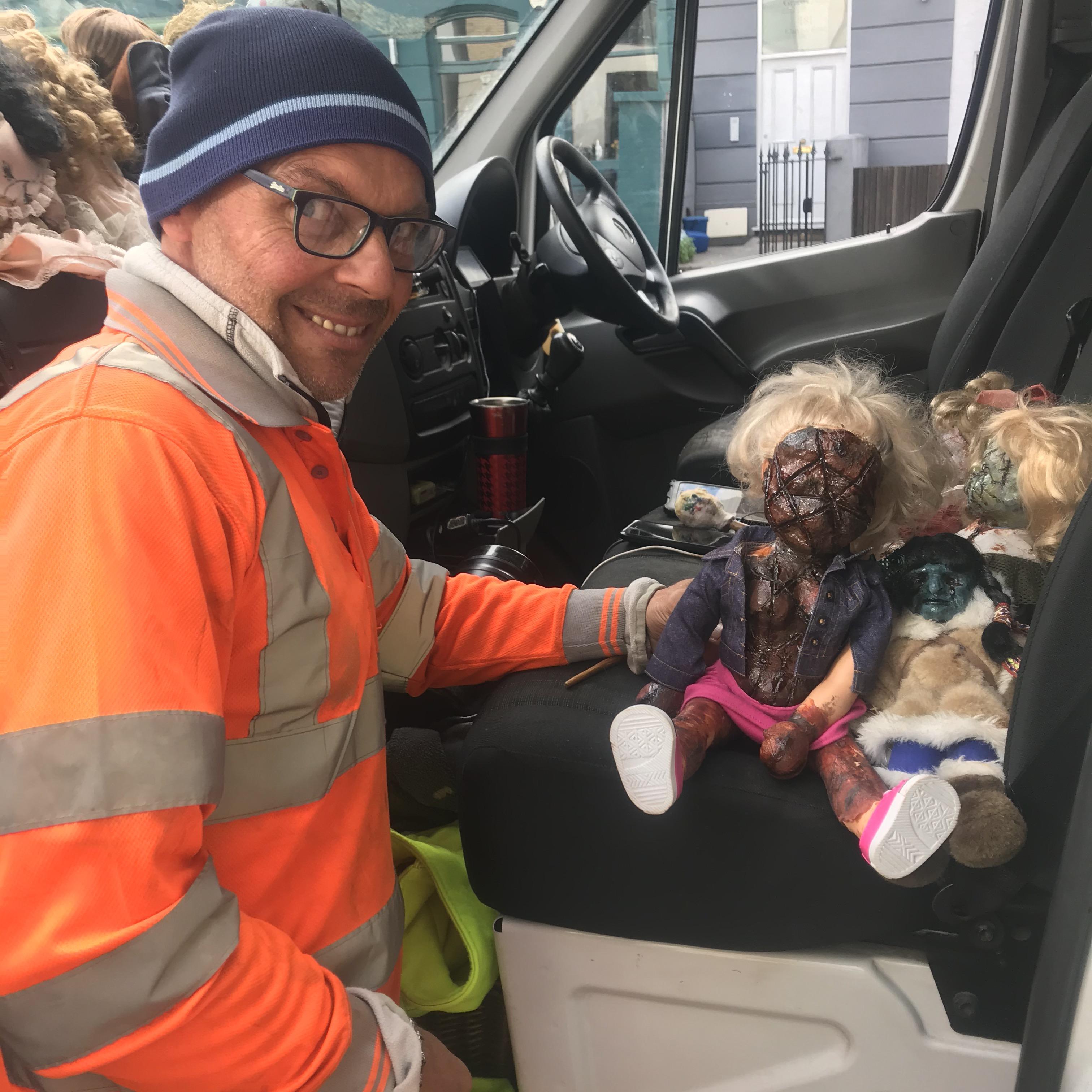 I never made stuff before. The inspiration mostly comes from films and from what I dream - and my dreams are dark. I get the dolls from charity shops. I won’t pay more than a pound for a doll,  so if someone wants to give me £5 for one, I’m happy with that. If they want to give me £20, I’m more than happy with that, but I don’t make em for the money, I make em because I just like the reaction when people see em in the van, they’re like, ‘Woah that’s weird.’ It’s cool. My daughter loves them too. There’s some I’ve made that have been really horrible and I’ve not shown her, but it’s nothing worse than what she sees on the telly. It’s just a doll. Besides, she knows I’m strange (she’s my blood), but there’s nothing wrong with being different. 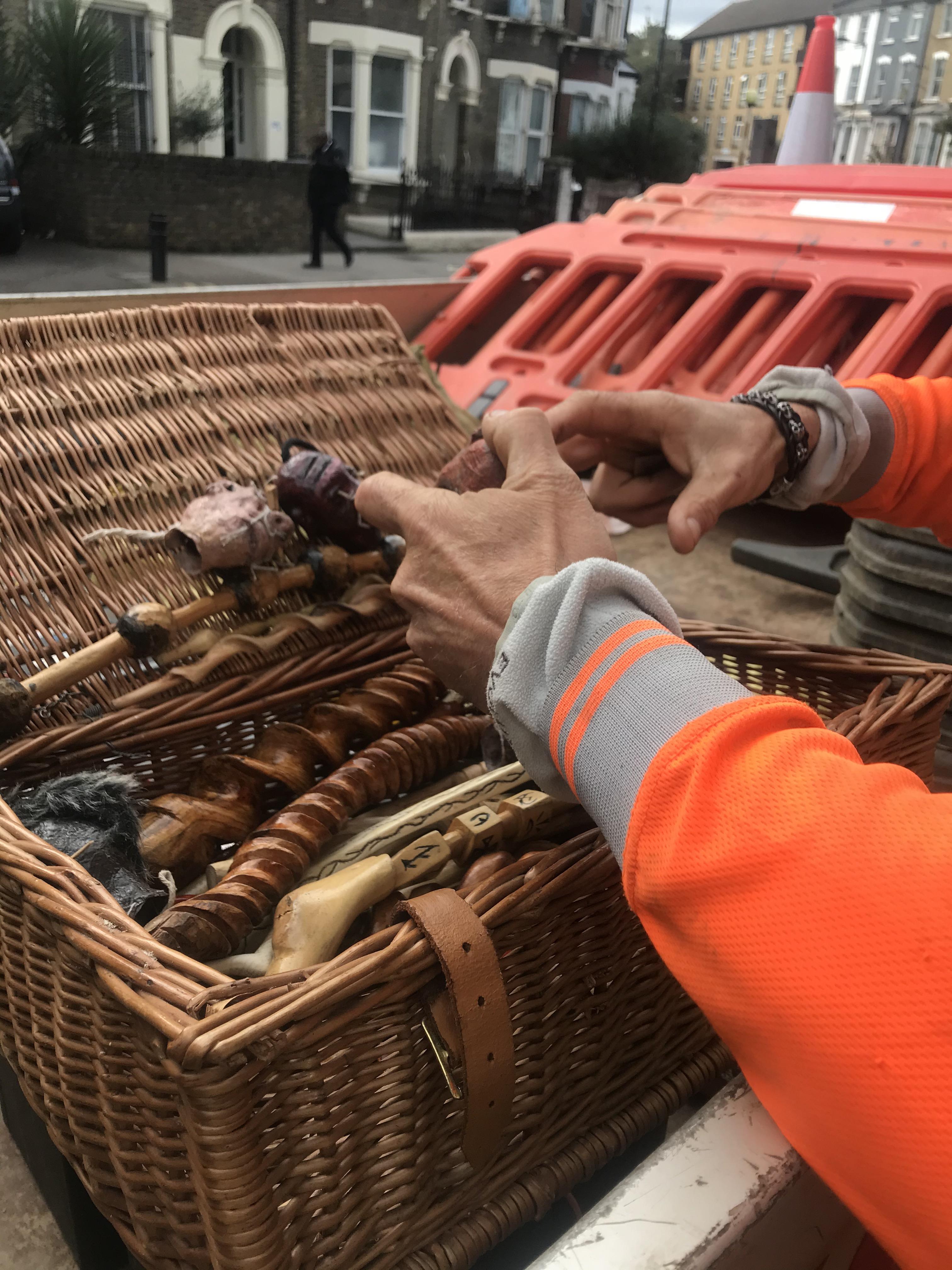 To mould them, I use plasticine, PVA glue and toilet paper. I actually use the plasticine again and again and again so it’s the same blob all the time. It’s the same technique with the shrunken heads. Once the PVA glue and toilet paper’s gone hard like papier-mâché, I scoop the plasticine out and reuse it. The paint is just poster paint, varnish, whatever else I can find to colour em. I use varnish instead of red paint for blood, because it looks more realistic. Sometimes I’ll put some leaves in the glue, to make it green. Basically I’ll use whatever I can find, cause I don’t like spending money. It’s not not that I’m poor, it’s just I don’t like forking out!

To me, every day is halloween. I just like the dark the strange and unusual, I think it’s brilliant. When they asked me at school what I wanted to do as a career, I said my ambition was to be a poltergeist. Unfortunately, no one could help me with that. Doing all this is the next best thing.

Derrick May, Jimmy White & dodgy London scenesters were on the agenda when Dribbler spoke to Mike Boorman about the inspirations for his hilarious book...

The Dekmantel and Rush Hour Recordings favourite sits down with his spiritual guide, Gerben Hallinga.

Adam Winstock runs the biggest survey of recreational drug use in the world. Here are his informed respones to UK drug policy.