During the winter of 2018 French producer Simo Cell and Egyptian multi-disciplinary artist Abdullah Miniawy came together in the former's studio in the suburbs of Paris. The pair had never met before, but despite this their individual styles and unshackled approach allowed them to forge a new musical path, navigated by Simo's hypermodern, bass-leaning production and Abdullah's soulful trumpet and powerful Eastern-grown poetics.

Separately the pair are recognised in their own regard. Simo Cell — a frequent Brothers From Different Mothers collaborator, which is the home of this new release — has become internationally known for his dexterity both behind the decks and in the studio. While the former has taken him to festivals and venues like Dekmantel, Nuits Sonore, De School and Concrete, his productions have found homes on Livity Sound, Timedance, Wisdom Teeth and Lavibe alongside Peter Van Hoesen.

Self-describing his craft as "an expression of revolution, religion and freedom", Abdullah Miniawy's feats come in many different forms. While he works within theatre, poetry and music, he is also behind several multidisciplined projects which see him speak out about the Egyptian revolt; his most recent of which (The Cry of Cairo) fires questions and critiques of violent political regimes, whilst raising hopes for the Egyptian youth.

Following the release of the duo's first outing, titled Kill Me or Negotiate, they guide us through the inspirations and meaning behind each track on the release.

Colors: 'Sama' is a dark green song, I see a turtle raise his head to catch a tasty vine leaf, it’s a wet ambience, very chaotic with flies buzzing in the background. Simon’s sound is velvety, fading in as a reflection of a fisherman's muddy sunglasses.

Season: The season could be spring; I cannot really see which season it fits specifically. Seasons are limited and that is challenging.

Inspiration: I was sad that day. I was not able to communicate with my ex-gf. I was having difficulties understanding the environment around me. I just moved freshly to Paris. I felt she was looking for someone inside me that I could not really find myself, so it was very complicated. I entered the studio I asked Simon to put me on, I recorded the track in one shot and it was just a relief.

I’ve no idea, I didn’t prepare anything, it was spontaneous in fact, it was just a quick improvisation maybe the same duration as the final track! I was flirting with a ‘tracking plugin’ from Simon’s computer.

Setting: The best setting to listen to the track could be on the shore with a mojito waiting for a turtle, or while being in the airport as ‘Sama’ means Sky!

Pending in the Pattern (Abdullah Miniawy)

Colors: Turquoise. We do not go so far from the wet ambience, a man on a boat riding the sea, with a purr in the background and screams of the crew hurrying to raise the sail.

Season: The season is absolutely winter for me.

Inspiration: I have been questioning ego, if it is a useful thing or a harmful thing. I don’t know why artists are accused of being ego tripped, meanwhile they’re led by their ego. It’s the thing inside you that decides and confirms a beam of an idea, and the same which fights against you afterwards! My career was just booming and everywhere I used to go; a bar, a house to see a friend, to go for a professional appointment or even to meet a stranger while a picnic, I was forced to talk about myself because people request joy tacitly, they want to hear new stories and art is a joyful even in the kitchen, when you mix colors while cooking or when you fix a lamp in a wrong cute way.

I was living this kind of cloudy moment when the first brick of pending in the pattern lyrics appeared. I was looking through the window, I put my feet on the fence and I looked at the wooden tiles. I said I’m a captain now, and then the lyrics came out like that, I met Simon and that was really groovy.

Setting: While wearing VR glasses looking for a 3D cat in a dark room.

Colors: Red and bloody; it’s the slaughtering action in a sweaty summer. The moment when the main character decided to waste his only ride between two needs of satisfying his hunger desire or reaching his Salvationز . Simon's sound is very metallic here, for me rusty and orange.

Inspiration: I guess I wrote the first phrases in the studio, meanwhile listening to the part that Simon proposed, then later I treated and edited the text.

In the beginning It was inspired from the famous story of ‘Adam & Eve’ but I put them on an imaginary mission to search for the sacred fruit, then they lost their way, because of greediness and blindness that was stronger than the main goal. I went deep in the metaphor when I used ‘Safarjal’; it’s a very Quranic word that is similar to ‘Quince’ and it refers to the sacred fruit in many sources, but still it’s bitterish! So no blame on them, and that switches the blamer and the blamed.

In our released version we took out the angels, the trees and we kept the fruit that refers to the distance. The treasure is the final destination here and later on, I added the ride that added a personal intimacy to the story. The main character had the same question again but in a very lazy way like sitting, like me now writing this while sitting.

Setting: The best setting to listen to this one maybe while watching Buffy the Vampire Slayer.

Color: The crazy synth from the track is Electric Blue. I would imagine a blue malleable shape very similar to Flubber if you remember the movie with Robin Williams. Abdullah's voice is brown and there are few light grey gleams.

Season: We're in summer. The weather is heavy and sweaty. Also, even if the track is very melancholic, there's a strong energy and the voice line is really efficient, it's time to party.

Inspiration: This track was called 'Talking With Computers' at first. We were conversing with our respective instruments: voice and synth. It's a dialogue between a robotic and a human world. The lyrics written by Abdullah came after - it's the story of someone who is blocked in someone else's body. Otherwise, the mixdown is inspired by Mike Dean's style, it's super crunchy and dusty but clean at the same time. I love the way he compresses and tweaks Travis Scott's music.

Setting: As Abdullah always says, we would like to go to Barbes (a district in Paris) to put a stage in front of a shop and perform the song live or play it loud. The dream would be to loop the track for hours and sing with everyone, heee/hey, heee/Hey, heee/hay!

Colors: Caged in Aly's Body is visually made of 2 layers, the background is dark brown, and we can see red flames at the forefront. This track is made of 2 different energies: earth and fire. It's really dense.

Season: It's got damn winter. The flames are really really cold and it's burning. We're in a chaotic place, like hell. Not the common representation of hell, but a very cold place like the one imagined by Dante in the Divine Comedy. In fact, hell is colder than heaven, this was the main discovery from Dante. Here is a picture from Gustave Doré to show how it looks like...

Inspiration: This track is taken from our first ever jam session. We knew each other for a week or so. Abdullah came to my studio with a trumpet. To be honest, I wasn't sure it would work because trumpet is very organic and different from my music which is more digital. But we gave it a try. We started with an ambient jam together ('weed in the freezer' is taken from this session too) where Abdullah played a strong theme made of three very simple notes, and then I plugged my 808 and it became more intense. It was a pure moment of abandonment with no purpose. This was a very spontaneous and naive moment. We barely knew each other!

The arrangement of the track was a very different story. It took me many months to build the track from the session we recorded. I started to work on it during a tour in China. I spent 3 hours every morning on it, selecting interesting parts of the recording and building around with drums inspired by the first jam. I created different trumpet layers, equalizing each layer very differently. It was a very, very complicated puzzle. Maybe the trip in China influenced me, who knows? Also, If I have to mention another inspiration, I listened to the album Mala in Cuba from Mala a lot to see how I could mix the trumpet.

Setting: The best place to listen to it would be a very dark club with no light at all and a very strong sound system.

Weed in The Freezer (Simo Cell)

Colors: This one is more textured. There are shades of green and yellow, something very similar to this (taken from Jack Anderson's Instagram). 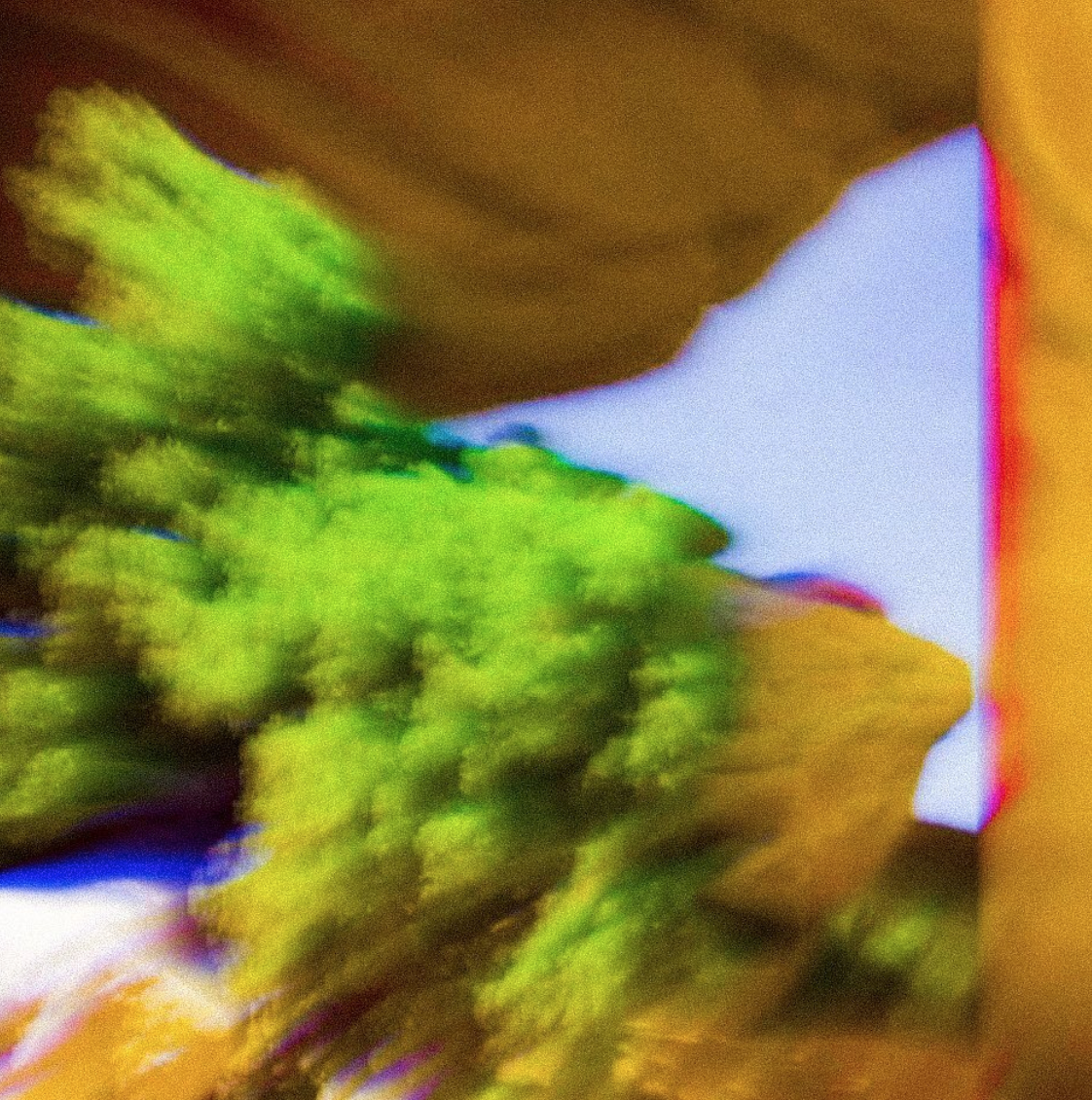 Season: We're in the fall with warm weather. It's probably 15 or 18 degrees but trees are starting to lose their leaves.

Inspiration: As I said before, the track is linked to Caged in Aly's body. Both tracks come from the same jam session. This track is deeply influenced by Abdullah's free jazz touch. It was clearly an unknown environment for me, I've never experienced this environment before. Abdullah was playing his trumpet and exploring different melodies and I tried following him with weird textures and noises. We went so deep, it was a trance! Same, I started to work on the arrangement in China.

Setting: I see a pirogue or a small boat, we're in the middle of a lake, surrounded by trees. Wait, it's not water, the lake is made of a sticky fluid. There are yellow, green and orange gleams. There is no wind, complete vacuum.