Friday marked the release of a new mini album from Flug 8, a producer with whom we have held a close affiliation and working relationship with over a number of years.

We were delighted to be able to release his latest endeavors via our label, a project called "Electric Field" which has seen him re-imagine his own leanings towards electronica, dub and spaced out techno.

It's a beautiful assortment of dreamscape's and pensive, reflective tones which dazzle and shimmer beneath the surface occasionally fluttering towards the surface in a euphoric flurry.

We invited him to guide us through the music, track by track...

At it's core is a multitrack recording of guitars that have been sent through a various number of hardware and software effects. The goal for me was to create a timeline symbiosis of my early years of creating music (playing rock and punk music in bands) to the present time. The result is electro-acoustically so to say, and has become a stylistic element throughout the entire album.

Honestly, I don't really know how it came about anymore, except that in the first phase of the album production I wired and synced a number of devices and synthesizers. This resulted in hours of jam sessions, sketches, recordings and ideas. One of them was the continuous, supporting riff, which was suddenly there and later became Arc to time. It kind of reminded me of my girlfriend who was in Denmark over a thousand kilometers away at the time. According to the motto: I'm alone but everything will be fine! And as it sometimes goes: As soon as I gave into the feeling, the other tracks came to me as if by magic, and the composition was done within a few hours.

Continuous Wave originally sounded completely different, because I had focused on another pioneering track which was a "talking cheap synthesizer", that had a major impact on the sound. During the later mixdown in which my friend Jörg Elling Wuttke (Alter Ego / Sensorama) was involved, the atmosphere changed significantly because unlike me, he had the courage to use other outboard effects and to experiment with changing existing volume in an extreme and radical way. The result really knocked me out of my socks and was much more interesting than the original version. A good example that the good old mixdown can become another musical instrument.

Maybe someone still knows the good old "Space Gum" from their childhood? A bag of chewing gum granules, which begin to crackle and bubble in the mouth before it ends in a tough, quickly chewed bad chewing gum? I rediscovered these little bags at a gas station and was very curious about the sound that I knew from my childhood. So I bought 10 sachets of it and recorded it in different environments and positions. Mostly in my mouth as a sound box until I finally got a toothache and later poured the space gum into different water-filled containers and glasses, which sounded very different from my mouth. The result was an analog random generator that provided the basis for the piece through a number of effects, layering and editing. In addition, I supplemented the random principle with digital random generators and created an electroacoustic symbiosis. It was important to me however, to capture a certain mood and make it sound organized out of all this coincidence and defenselessness, from which the composition then was created.

Effective high is a typical example of the type of synthesizer music that I do. Most of the time I start with a device, turn around knobs until I like the sound and record it. I like making music very quickly, because it triggers pictures or moods in me that influence me in the further matters of the production and show me an unfiltered direction that I then blindly follow. On the whole scale creating music, I aim for a light flow as I don't like biting my teeth in the process of creating. 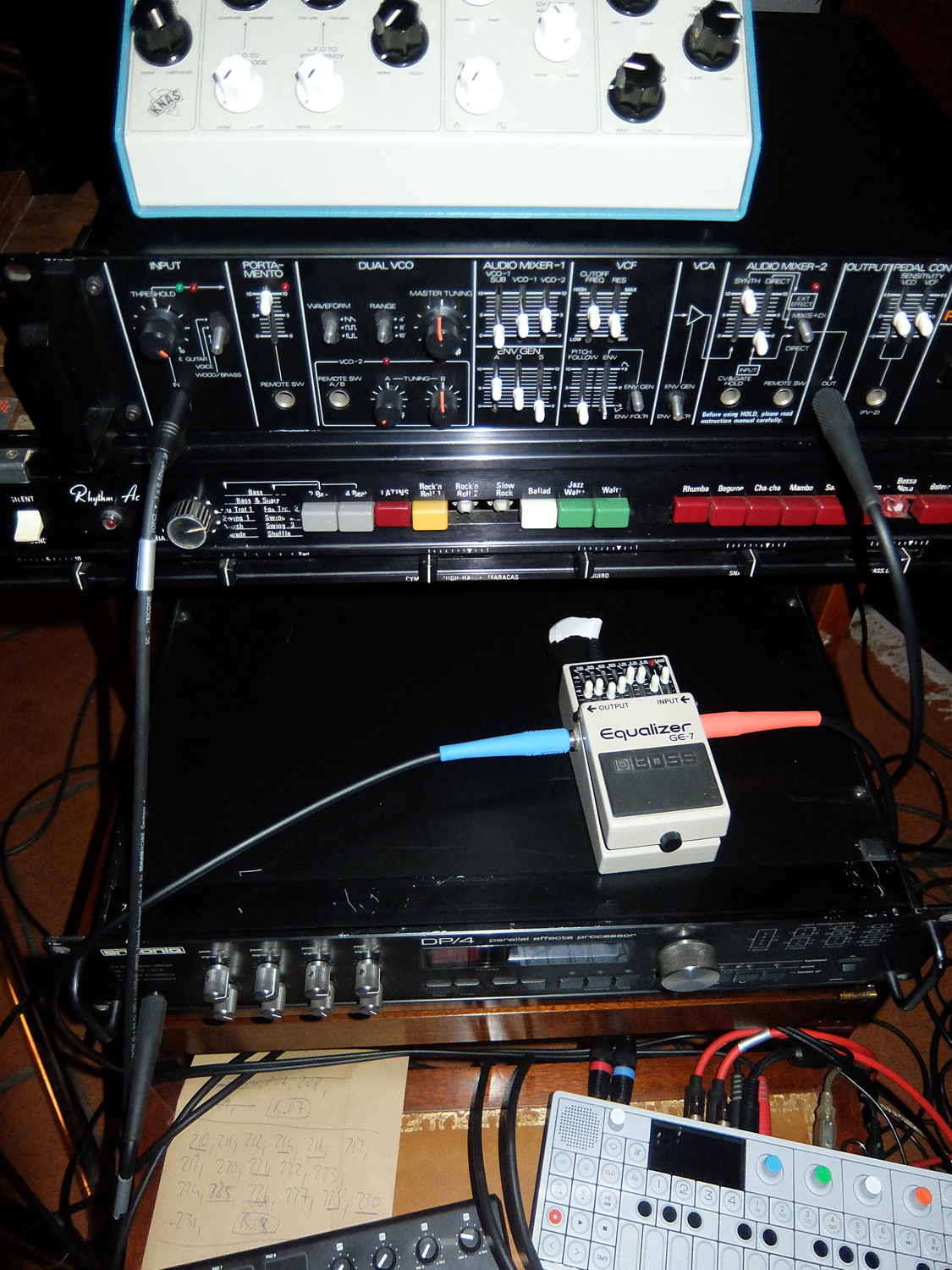 The basis of the simple rhythm structure was created in a jam session with Florian Huth
(Sound artist and professional bass player and guitarist from Mannheim), who came to visit me  during the Elektric Field production phase. In his luggage, as always, his electric guitar, Russian preamp and laptop with self-written software that turns his guitar playing into a synthesizer. The wonderful melody line that refines the piece comes from him. Afterwards I arranged the elements and did some overdubs with my voice through efx - devices to create sound spaces.

This piece is based on a strangely shifted rhythm loop that I created with an old hardware sampler. I was interested in creating an atmosphere with synthesizers that would imitate the sound but was not created with guitars. I ended up with an old Roland synthesizer that was sent through my old guitar floor pedals and for me at that moment did not differ from an original guitar sound. I wanted to prove to myself that you don't need guitars to create a guitar like atmosphere.

Before this piece got the name Comic Noise, it was an ambient, easily digestible vibe that I rediscovered on an old laptop. I had taken up this topic a few years ago with headphones and cheap plug-in synthesizers on a vacation and had forgotten about it. I found the content of the piece nice and appealing, but the sound and length of 15 minutes was not so exciting. It was boring to be honest and did not have any variation. So I rearranged it, shortened it, and sent the individual tracks through various effects, and bent it to the maximum through analog distortion until I had the impression that I had reached orbit. It was then my idea of ​​how space would sound like if there were noises.