Chekov's newest release marks the beginning of a new chapter in their life; an exploration of new identity within themselves and their productions.

Finding a home on Shanti Celeste and Gramrcy's Peach Discs, Aerated is a departure from the razor sharp electronics heard on the Leeds-based producer's debut EP for the label in 2017. Instead they choose to experiment with something they'd previously shied away from: using melody as colour.

Written over a two year period, the record is a personal collection of tracks crafted with head, heart and a nimble touch that represents a snapshot of time for Chekov, a period of discovery and acceptance. Below Laurence shares some words on the release...

"This record captures my attempts to engage more fully with melody. This is something I've often overlooked in the past, as both a producer and DJ. Thanks to some gentle (and welcome) nudges from friends and peers, I've tried to add splashes of colour and allow myself to embrace emotions beyond pure dread. This isn't something that comes easily to me yet, as someone socialised 'male', so my eternal gratitude goes to those who have lent me their patience and encouragement here! It seems no coincidence that a broader spectrum of emotion has emerged in my work as I have engaged more fully in exploring my gender identity."

Here they break down each composition on the release track by track...

Whenever I struggle for ideas starting club tracks, I like to play with beatless soundscapes as a way of making noises that feels a bit less pressured. Sometimes they slowly morph in other directions, other times they stay as hazy sketches like this.

The field recording underneath comes from Mother Shipton’s Cave in Knaresborough, where my partner and I spent a balmy late summer’s day last year. The deep green plant life around the petrifying well definitely influenced how I wanted this record to sound when it came to playing with pre-masters. 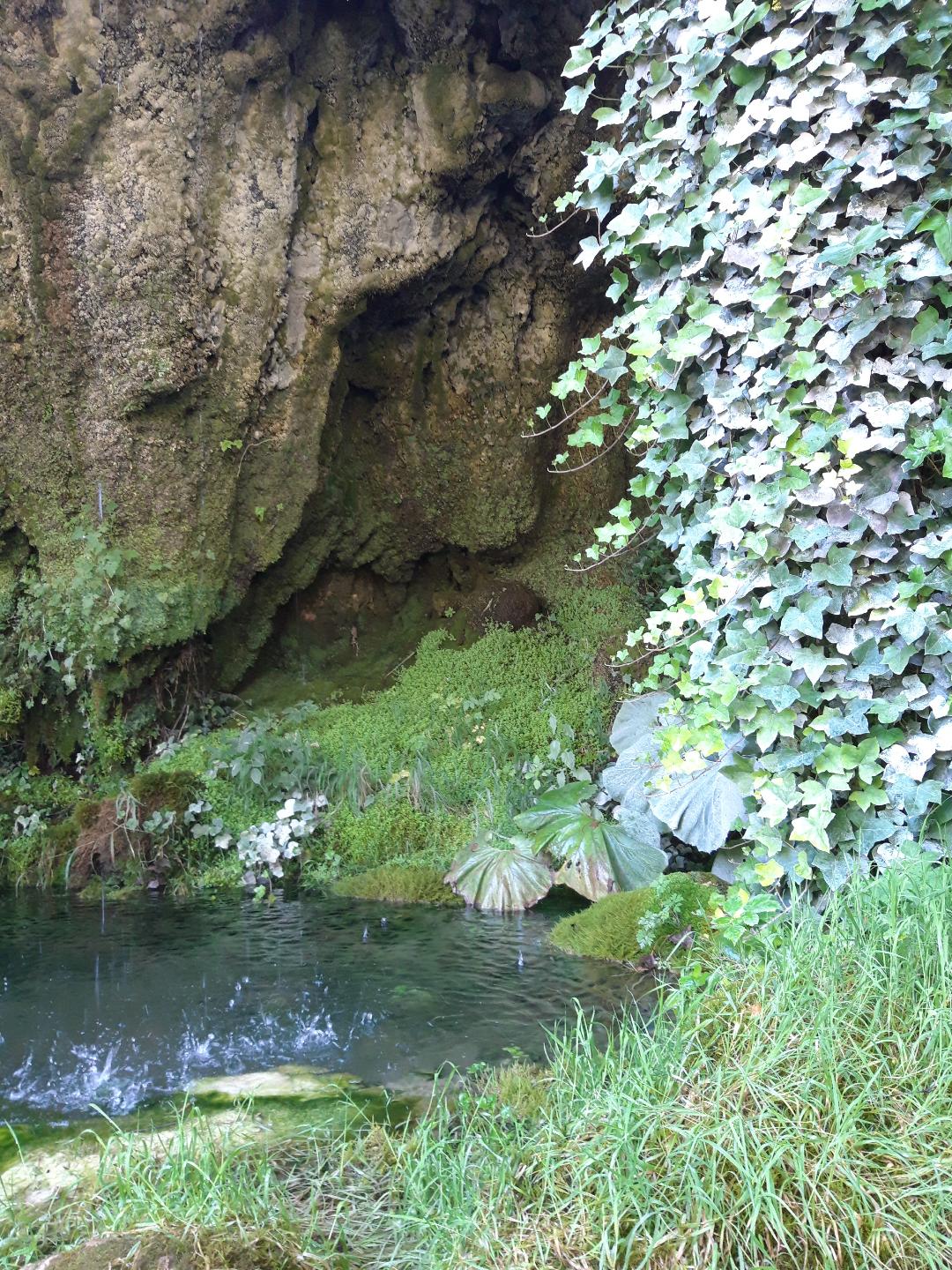 This is the oldest of the four tracks, dating to around Jan. 2018, I think. I was going through a big Riccy V phase at the time so this started life as an attempt at minimal! It went a bit off-piste from there, I think…

This one’s always felt shades of blue to me (similar to the ‘mbv’ artwork), with the Rhodes-y lead cutting through bursts of white heat. As with most of my (finished) tracks, I tried to let the arrangement write itself for the most part; the siren was a complete accident, one of many delays left in an automation feedback loop (until I recorded it!)

‘Swerl’ started off as a beatless pressure-valve, with notes in mostly random-length loops so I could play with polyrhythms and melody in a way that would almost be out of my control. This is something I’ve recently been enjoying even more thanks to Cong Burn Bossman Howes’ ‘Strokes’ sequencer (go check it!!)

It’s always felt kaleidoscopic to me, and I hope it manages to get across a fuller (albeit blurred) spectrum of feelings than previous tracks. Written in spring last year, I like to think the chords were added on an early sunny day, in hope of what may later come. In all likelihood, it was probs another grey Leeds afternoon!

I took this photo in Summer 2014 towards the end of my first stay in Leipzig. Having discovered some great places and made some wonderful friends, the upbeat glow and haze of this picture has really stuck with me since as a snapshot of that time. 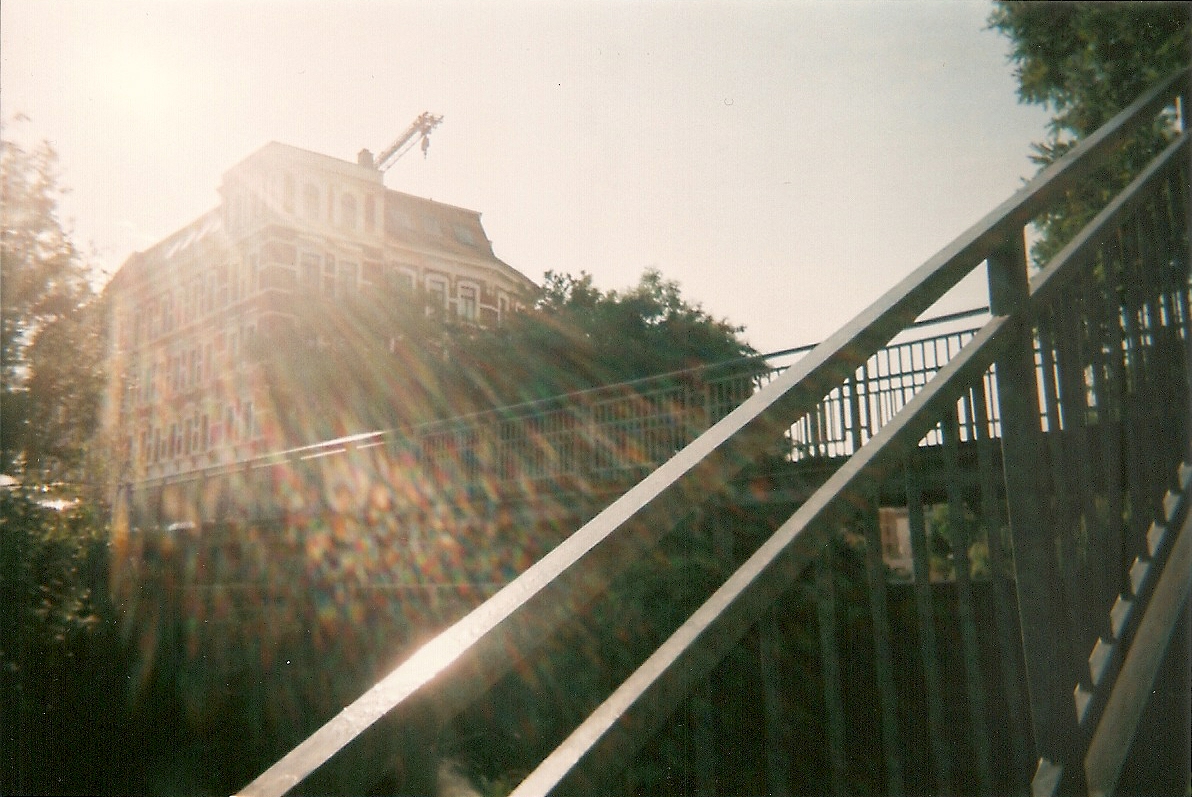 “Got any steppas, mert?”

Another initially drum-free endeavour, this one turned into a sludgy half-step march for funsies! I was never so into this more modern style of dub, until I was caught in just the right headspace at the Leeds West Indian Carnival before last (s/o Zulu Swarm!) ‘SMP’ reminds me of slow TV static, with odd shapes and contortions pushing out like a magic eye.

For years now, I’ve had the painting ‘Revolution 2.0’ by Ghada Amer saved to my laptop under a generic filename, but only just thought to reverse-image-search it (d’oh). It really captures the kind of interconnectedness I aim for in my music, so I’m excited now to spend some more time exploring Amer’s work! 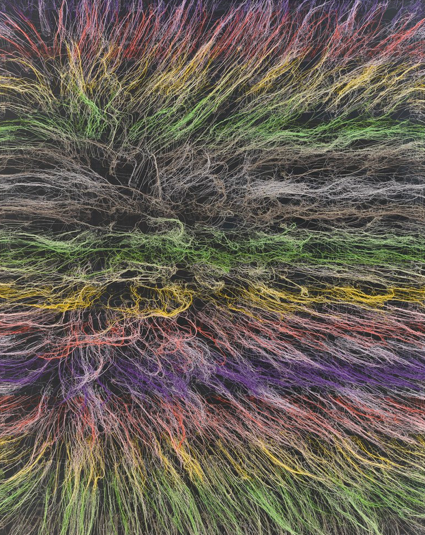