Oh cutie, many different people attempted to define beauty during the past centuries, - most of them failed, ayay! - and I am not the most indicated to tell you, but hey, I have come to a conclusion: Beauty is not only a relative thing (we all know that), but also is something that resides in the eyes of the creature who can see it, feel it and create it - in the most unique and powerful way. Beauty can be found ANYWHERE and that is simply beautiful. Don’t you see?

In a world that everything seems to be running at double speed, beauty hides like a child, - hide and seek! - and you have to be smart and fast as a tiger and never ever look back (unless it’s to see how pretty and wild you were and still are) in order to seek the pure essence of beauty.

Today I’m gonna talk about one of the most interesting, wild and prolific minds I’ve ever known in my entire life, the one and only Shuji Terayama. 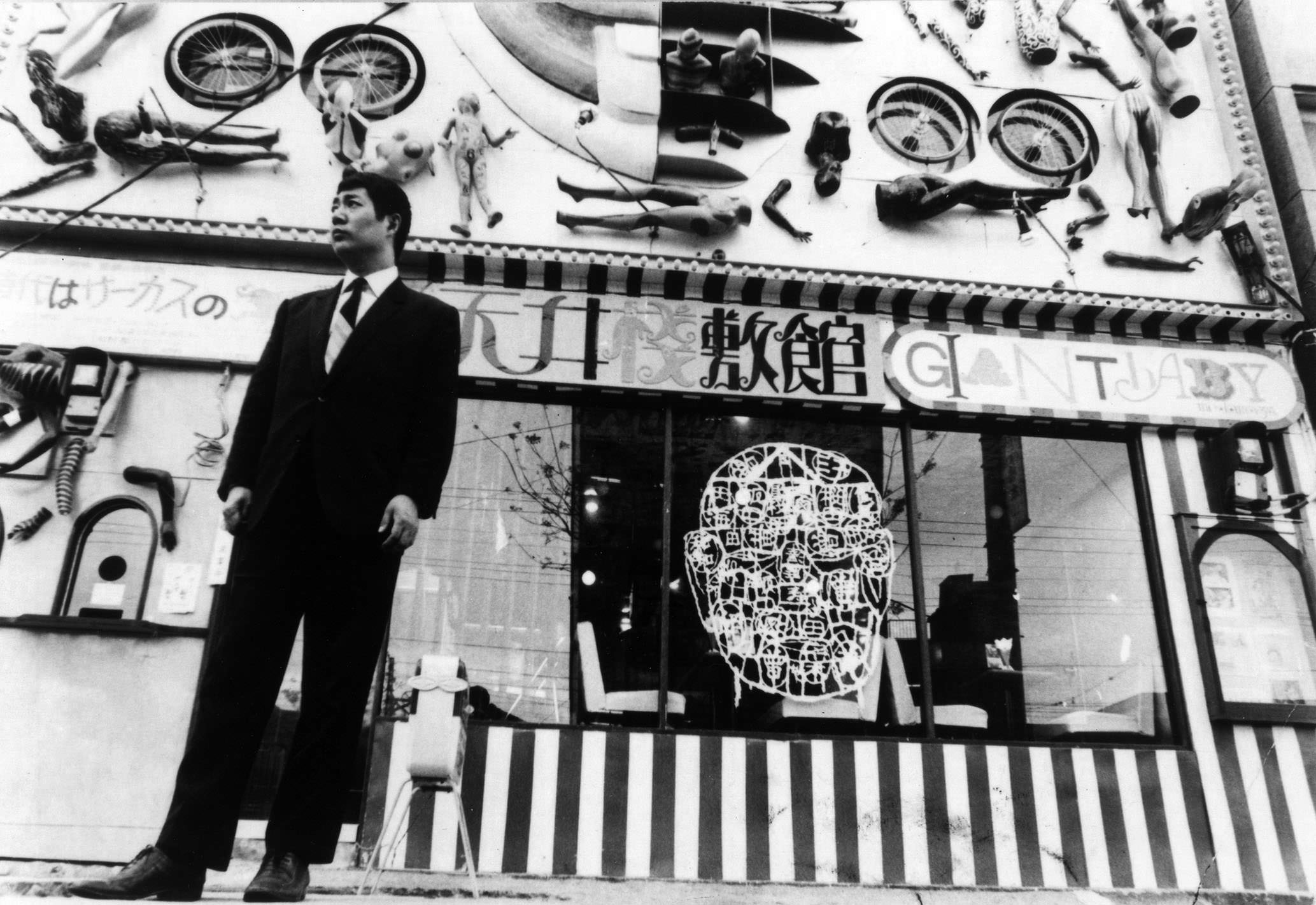 Terayama was Born in Aomori prefecture on December 10th, 1936. “You were born on a moving train, so your birthplace is unclear.” - His mother said. He escaped with her from their hometown during the air raids committed by the American air forces in World War II. His father, a drunk police officer “who would play, drunk, with his pistol at home and point it at his son” died while on a military service in the Pacific War, Indonesia - Terayama was only 9 years old. Later on, his mother started working at the Kyushu US military base and had to leave his only son with his uncle in Misawa. He felt terribly defenceless and abandoned by his mother, and later on, this will take it’s own unique form on his writings, films and photographs.

Terayama started as a writer (being published at the age of 15), focusing mostly on Haiku and Tanka. He was a very controversial poet because of his unique way of mixing and modifying the Tanka and Haiku rules of writing (which was quite unacceptable back in the day). He was playful, mystical and very creative. He was a hustler of words.

At the age of eighteen, Terayama was diagnosed with nephritis (same disease that took his life away on May 4th, 1983) and had to spend most of his high school years at the hospital in Shinjuku district. At that time student protests and different kinds of art movements were happening on the streets of Tokyo. In the mid 60s Shinjuku officially became the epicentre of the counter culture in Japan - and Shuji was there to take advantage of that situation.

Terayama spent many nights watching films at his uncle’s cinema, and for some reason, Casablanca remained one of his all time favourites.

His first short “The Cage / Ori”, was filmed in 1962 and released in 1964. In this piece you can see how wild and philosophical he was at a very young age, exploring the relation between time and the human being. Is the man a prisoner of time? tic tac.

In 1967 he founded alongside his wife Eiko Kujo and the well known graphic designer Tadanori Yokoo, a theatrical group called Tenjo Sajiki (taken from the Japanese release title of Marcel Carné's 1945 Les Enfants du Paradis). Later on, a Tenjo Sajiki theatre opened in Shibuya - the building was designed by the great Kiyoshi Awazu: 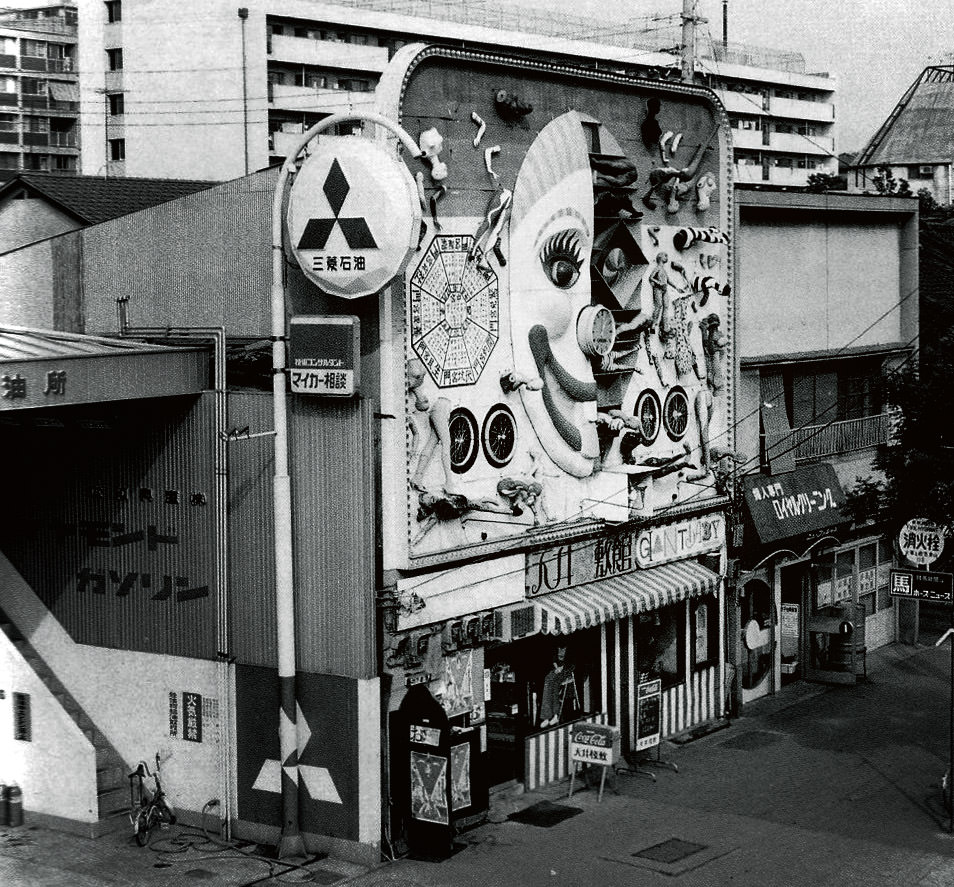 Terayama encouraged young people to leave their routines and join Tenjo Sajiki. The group, mainly composed by runaways, outsiders and creative bums, started with The Hunchback Of Aomori and a few years later they were touring around Europe, America and Middle East. Terayama once said “theatre has become the slave of writing, while actor’s speech is dictated by the printed word” and in order to remedy this - declared “first and foremost, theatre must be severed from literature. To do so, we must purge theatre of the play.” 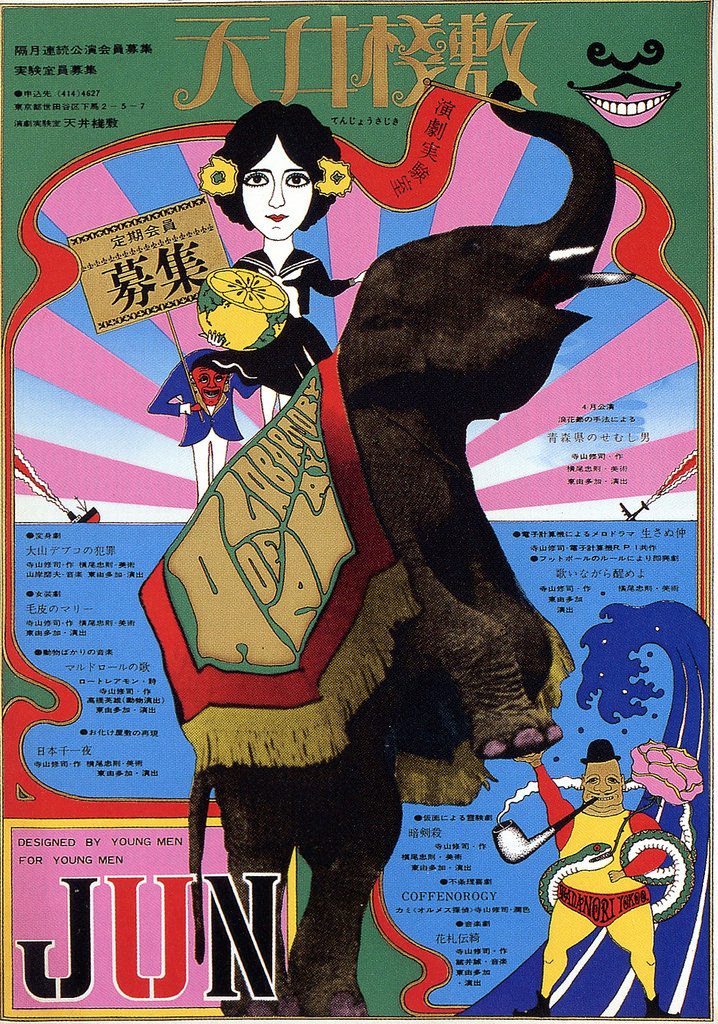 In conclusion, Shuji Terayama is very difficult to summarise because he was many things - poet, sports critic, novelist, playwright, photographer, filmmaker, etc. But most importantly, he was an observer and a creator of beauty, a beautiful provocateur and a brilliant mind.

About his films... here are some of my favourites:

I remember very well the first time I saw this short film, I immediately felt something strange and beautiful, a very unique feeling - something similar to lucid dreaming - that haunted me for the rest of my life. 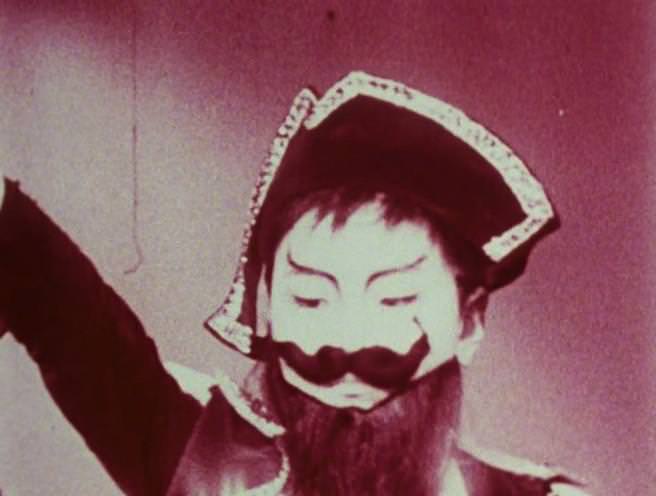 One of his most well known films. An interesting tale that narrates the story of a young emperor and his anarchic kingdom, an imaginary world where the young kids are in charge of the adults. Wildness at its best.

Throw Away Your Books And Rally In The Streets (1971)

The film starts with the confounded and marginalised protagonist (Eimei) speaking directly to us and making us think about... argh!

This one is a very loud, wild and emotional film, probably one of my favourites from him. An ode to the dying days of the ‘60s youthful rebellion, a political trip back to socialistic innocence - all this - in a period where young Japanese were increasingly being influenced by the western culture. Music by the wonderful Tokyo Kid Brothers.

This is a very interesting autobiographical film. A young Terayama (Interpreted by Hiroyuki Takano) lives with his mother on a weirdly traditional town where everybody is so superstitious. He thinks that the only way to grow up correctly and survive is - escaping by train to the big city with a strange and attractive woman that seems to be interested in him. Then a present self (Interpreted by Kantaro Suga) appears into the narrative and makes us think and doubt about what is true and what is not. God bless confusion!

“The past is whatever you write it is” 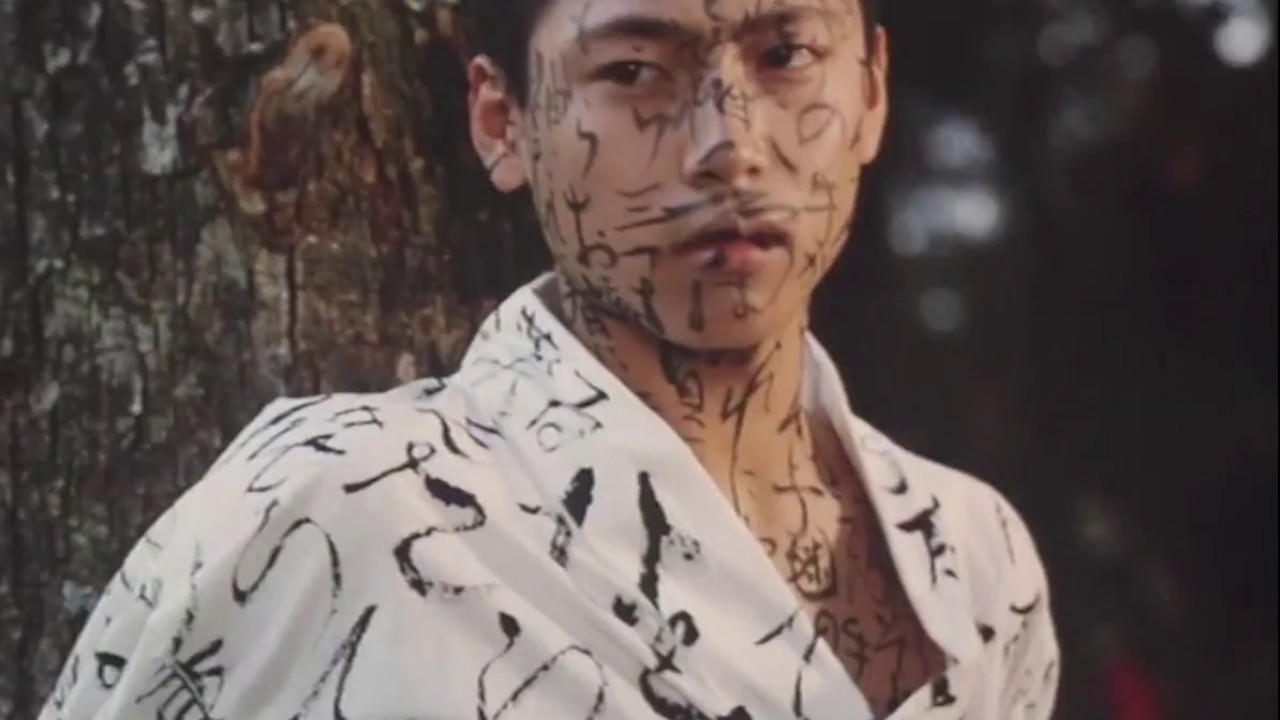 A very beautiful and surreal film - where a young man (Akira) tries to remember the lyrics of a song that his mother used to sung to him... In this film Terayama also plays with symbology and also shows and distorts his own repressed memories. One of those films that makes you think and feel something weirdly special. 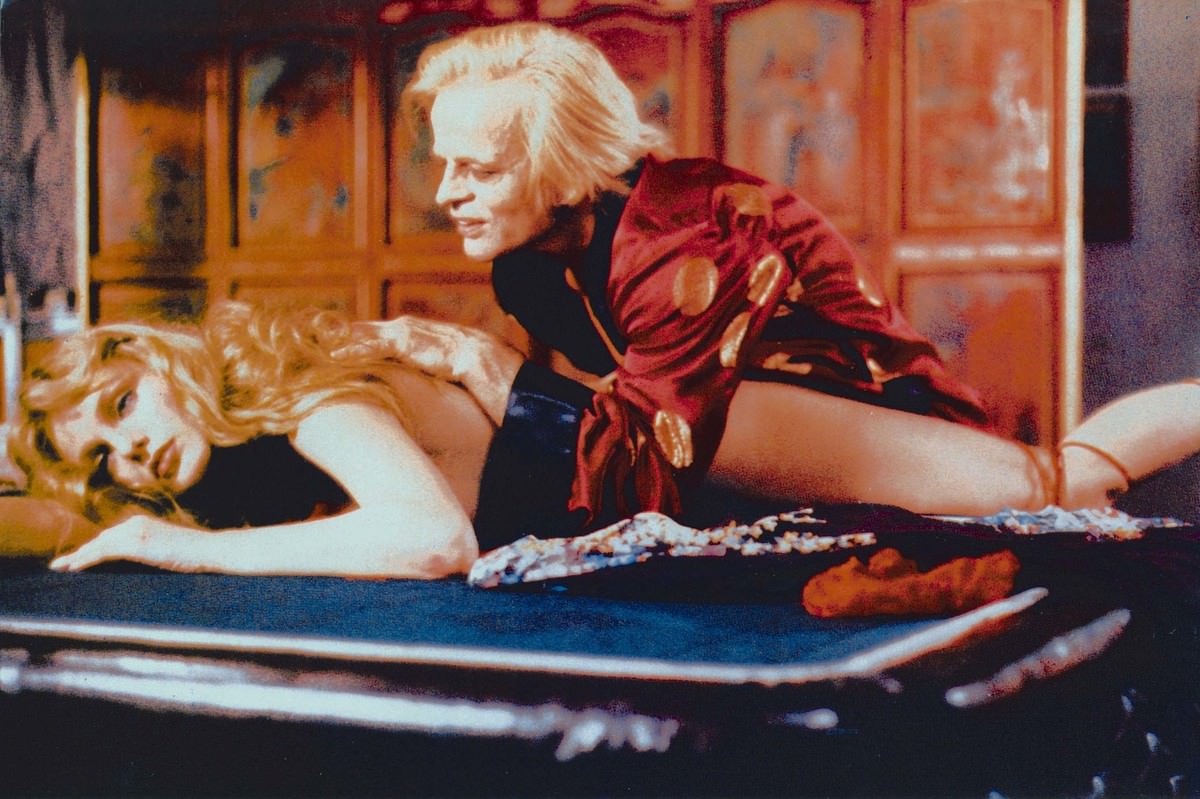 A very sexual and anti-imperialist tale. This film directed by Terayama is “based” on the novel Retour à Roissy by Pauline Réage, written as a sequel to the “Story of O”. Starring: Klaus Kinski and Isabelle Illiers. Holy Isabelle!

About his books... some of them are still only in Japanese and the photo books are rare to find and/or expensive as hell, but thanks to UBU web you can check some pages of the “Photothèque imaginaire de Shuji Terayama” (1975). I would also like to recommend you the book “The Crimson Thread of Abandon”, 20 beautiful metaphorical tales for “adults” translated to English and now also available in Spanish thanks to Libros Walden.

Ay! darling, how far we’ve come, and how far we still have to go... and damn, I told you many times, I hate wasting time!

Don’t forget to create beauty, search beauty and taste beauty... and beat beat beat! the boring side of this “peculiar” system we live in - destroy habit and boredom - But most of all, enjoy with all your damn senses. Thank you for reading!