This is music for those with overactive imaginations: who aren't content to just read high fantasy novels but want to exist in them as well. Who want to to hear, smell and taste their surroundings. On his album Tuono, Fango takes his listener to far-away lands, forests, jungles and great deserts using samples and evocative percussion.

Tuono ruminates on the theme of thunder, warfare – cultural and natural – which run throughout his music with horses' strides recorded and used on 'Callabos' to create the sound of running away from death. The romantically visual sound he creates involves communities at war, tribes, war dances and clubbers all creating something as part of a pack.

To get the full picture we decided to get inside Fango's vibrant imagination and music Track By Track:

In Italian, tuono means thunder – the sound of lightning. I’ve always been fascinated by the power of lightning and I tried to recreate its hypnotic atmosphere in the music as well as its energy, which is able to rip off the sky and stop time. Thunder sounds like stabs that kill a member of an indigenous tribe. At his death there’s a war dance covered by the scream of the widow which carries all the energy that will lead to revenge.

The song is a desperate run of indios through the jungle, an escape to nowhere and for no apparent reason but something spiritual. N1 was my first song as Fango and at that time I was working on other projects which were like a burden to me. This song was born from my reaction to that situation, it was a production for myself and I didn’t even want to publish it at first because I though it couldn’t work out. Then Batongo (label mate and fellow producer) listened to it and convinced me to push it out with Degustibus records. Fango was born.

It was my second single, a song that stayed under the radar until Dixon and Ame recently “discovered” it. While I was composing it I was imagining Bedouins fighting against their rivals whilst desperately running away from war and death. Therefore, I built up the song from the sample of the horses strides. When the snare goes off beat, the horses fall down with exhaustion.

A group of tribal fishermen live in an atoll on the Pacific. The practice of fishing is like an offer to their demanding god. This form of spirituality is expressed by the sample of a holy man.

Saetta means lightning. The song is a dance honouring the female warriors of a Amazonian tribe. There are two characters: the woman who sings the exploits of her friends and the dead warrior surrounded by the tribe. Her spirit goes up to the sky lifted by the chants of the survivors.

According to the Italian dictionary, Lampo is a “sudden flash that takes place in the atmosphere”: it is the luminous and visual part of lightning. In the early nineteenth century, a troop marches towards the battle field while the General in the first line, incites them. His speech is a crescendo and as the soldiers get closer to the enemy, ready to fight, they loose their masks of evolved men. What remains is only animal instinct. They are ready to die. While I was composing it, I had the Pachanga Boys in mind, especially the work of Rebolledo. I remember I finished it quickly and asked Rebolledo to remix one of the songs of the album of which he picked precisely this one. Its forth-coming and I can’t wait to listen to it! In Dritto I play guitar: not the main rhythmic one but the back-ground sounds that give the impression of a of beached whale.

This is my third single, and the most successful to date. I worked on it for six months because even if I already had the melody in mind, I was trying to keep its' sound as clean as possible. I was about to give up but Batongo convinced me to keep working on it. In the break down there’s a sample of a storm.

Tei doesn’t mean anything neither in Italian nor in other languages, I believe. The voice in the song is mine: I couldn’t find an element for the song, I went to the kitchen for a tea and I felt like screaming Tei. You hear the sound of a cassette that gets flipped over: I’ve always been fascinated by that since ever I was little, when I had to turn a cassette over to the other side. I pictured a rave party in an abandoned factory in Marghera, close to Venice, and a guitarist that gets in at the end of the concert and curses out the audience who doesn’t appreciate his music. It is the tale of a nightmare. I used the scream of a woman, the squeak of a door and a cry from a movie. At minute 3:45 a rhythm made by the sound of a door kicks in and at the 4:56 another one made by crying.

Folgorato means stricken by the electricity of lightning. There’s a piano part that I’ve played and edited. It’s a Steinway from the early twentieth century that is in the studio where I work as a mixing engineer. The picture of this track is war, the drums are made by gunshots and riffle samples, it expresses the stress of the world wars. At a certain point in the song you can hear something crazy that sounds like a wind instrument but instead it’s a squeaking door, my bathroom door. I had to remove the microphones from the door right away because my father didn’t understand whether he could go in or not. The title means “fear of lightning” that is expressed by the anguish of the drums, immutable and obsessive. It is a trip inside the depth of fear. Also in this song I play the effect laden guitar.

A short track composed before Fango, a little experiment that I started when the needle of my turntable broke and I’ve used the noises coming out of it for the song. 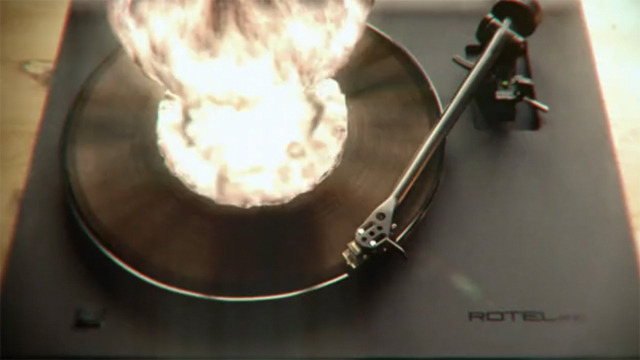 Fango's album 'Tuono' is out now. Full details on Degustibus site here and his facebook here