Label Love #68: Death Is Not The End
Minute Read Death Is Not The End seems an eerily suitable name for Luke Owen’s label, one that straddles the border between being part musical, part ethnomusicological, primarily exploring archival recordings of early American folk, blues and gospel. Having listened to his NTS show over the past year, I met him at his Peckham house one dark, cold December evening to discuss the spirituality underpinning his label’s releases; some of the most hidden, crackly and interesting recordings I’d ever heard. All of this, set to a background soundtrack of folkloric hallucinogen-soaked Mexican healing rituals. 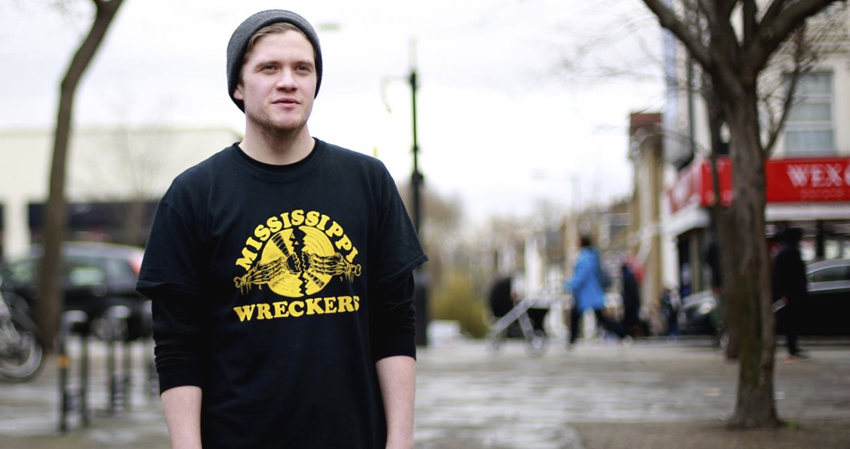 DINTE (Death Is Not The End) was born out of Luke’s sheer interest and involvement in music. He’d previously set up a label and was working at a digital distributor up until 2013. When he left he’d had a couple of weeks to go through their archives, he tells me, and was met by the biggest source of music he could have ever gotten his hands on. Around 2014 he decided to play around with the concept of DINTE looking at old field recordings, some of which he had dug out of the archives from that previous job. The label’s first release Angola Prison Spirituals by folklorist Harry Oster was a re-issue of a record put out in 1959, but recorded in the late ‘40s/early ’50s at Louisiana State Penitentiary. It featured lots of names, some of which went on to have a longer career ahead of them in the blues and gospel scene, and some of which would never be heard again. Luke continued in similar vein, with DINTE’s second record, Murderers’ Home, another compilation of work songs and Deep South penitentiary hollers, this time in the form of Alan Lomax’s field recorded LP of the same name.

“With the first release I managed to just find the masters for the entire thing fairly easily, but the second release… it was sort of a process of hearing a couple of tracks from that record, finding out what record those tracks were from and going back and finding that release. I had to find masters from various tracks to put together the jigsaw.”

This is what makes DINTE interesting – it’s a project born out of sheer curiosity for music from a wholly different time, place and situation. Luke discusses in depth the background to his 3rd release, a compilation of tracks by a country/blues/gospel guitarist named Sister O.M. Terrell. He navigates carefully and thoroughly through the various compilations he’d heard her on before, and explains how he worked to consolidate all her recordings together, owing to the fact she’d only recorded 8 tracks in her entire lifetime. It’s all a case of putting together the jigsaw behind some of the most hidden, sparse and little-heard old American music. We navigate through the history of lesser known blues and gospel of old and how it wasn’t about career musicians; it was mostly one session in the recording studio, self-funded by churches and congregations in the Deep South.

Asking which of the releases, if any, particularly stand out leads down another rabbit-hole of Luke’s infinitely obscure musical knowledge, this time to a re-issue of the field recordings of R. Gordon Wasson in Mexico in ’56. Wasson, an ex-investment banker with a penchant for hallucinogens found himself tracking the enigmatic Maria Sabina, a Mexican cult figure who was famous for being a bit of shaman, taking hallucinogenic mushrooms and performing healing rituals on the sick. It transpires Wasson’s trip was actually part of the CIA’s MKUltra project and whilst Luke tells me this one perhaps seems a bit out of sync with the others, a lot of the stuff he is doing with the DINTE project is looking at the connection between spirituality and music, hence the name. It seems almost an ethnomusicologist’s approach, looking at such recordings as documents of a culture, a snippet of a time and place created in a single take rather than something crafted and revered for it’s musicality.

“I’m not a religious person myself but I’ve always found that you can find a lot of raw power and emotion in music in general, but none more so than when you listen to stuff that has spirituality… With the field recording side of things, for example the Horace Sprott one we did, it’s probably good to point out in that sense – it’s by no means professional studio recorded material, it’s someone’s porch in Alabama in a time I’ve never lived in, I’ve never experienced and I never will. That’s interesting to me.”

Rather than focusing on the high end re-issues, tracking down the master tapes and getting it on the mixing board, the story is where the interest lies and whilst there’s obviously a line to be draw when it comes to audibility, Luke explains that he’s not too precious when comes to putting something out that does have a lot of the flaws. To him, it’s all part of the wider appeal.

“My approach has never been that much of an audiophile’s approach, so I tend to quite like a lot of the imperfections in recordings of earlier stuff, just because that’s how it was captured. They’re by no means high quality recordings necessarily, but, again, I’ve never really been too bothered by stuff like that – I’ve been more interested in the grit and crackle.”

Finally, I ask what’s next for the label. We talk about another re-issue, this time from a cult artist in New Orleans called Sister Gertrude Morgan, and a look at more contemporary stuff influenced by primitive style solo guitar playing, stuff influenced by John Fahey and Robbie Basho. Luke explains that with the contemporary stuff he’s developed an interest because quite a few people are doing it under the radar, reasoning I find apt.

Further to this, he tells me he’s looking into doing his own field recordings, taking the ideas behind his older releases and applying them in a modern context. It’s seems the natural next step and whilst he tells me he’s just made recordings of fairly atmospheric stuff so far, he’s looking to approach people and make recordings of Pentecostal and evangelical church congregations around his local area; an idea we end up discussing how to approach for some time. He’s also in contact with a guy in Russia running a label called Ored Recordings, focusing on traditional music from the Caucasus and exploring music from the orthodox, pontic Greek and Russian muslim communities in the region.

“I’m looking around for… not professional artists, just basically, y’know, travellers and stuff like that in London; various immigrant communities and such to try and make similar recordings, in a sense. Once you listen to that sort of stuff you realise there’s still a lot of documenting to do…”