I think I might be too cranky to write this week. Even if it has been awhile, Brenda’s in a bad fucking mood. For reasons I won’t go into, all day I’ve been wrestling with the idea, ‘Is it because I’m a girl?’

To be honest I hate that question, especially when it’s applied to anything work-related. It’s one you can never answer for sure, and it’s always accompanied with a fountain of insecurities alongisde the ubiquitous ‘or am I just being overly-sensitive’?

Yes we live in a sexist shitbag fucking world, with a sexist shitbag lunatic clogging more than twitter feeds. We all know women have to work a kazillion times harder in order to achieve the same thing as our ding-dong flinging counterparts & that the music industry is a macho, rampant playing field where the birds wave pompoms whilst the boys play the game. Yes, the evil male has a hell of a lot to answer for.

But still, a lot of the time I prefer to just keep my head down and get on with it. Whilst I applaud my loud and vocal sisters, there are lots of ways to fight the cause. I go for the more subtle, and would rather not lap at the edge of that bottomless pit called self-doubt.

Although every once in a while …

But I said I wasn’t gonna go there, right?

So let’s discuss GIRL STUFF instead. Cause that’s what I am, a GIRL. I’m a GIRL who had my first manicure a couple weeks back. DC pure dragged me along to Nails 4 U. Her acrylic extensions had chipped and she needed to get them *insert correct specialist term*. I was happy to sit there and wait, but she coerced me into getting pampered.

‘Come on, you’ll love it. It’s only a tenner. They get right in under the cuticle then give you a hand massage. It’s great’

Do not shy away to new experiences, I tell myself. The first thing we had to do was choose a varnish (I didn’t realise they’d be getting painted too). I stood staring at the wall for ages, struggling to imagine my tips in any of the tints. I was wearing a new red jumper too, which didn’t help. I liked my top and none of the colours seemed to suit it, but I finally settled on a creamy beige – a bit like a drab manilla envelope.

‘You’re choosing that one?’ DC seemed a surprised but on closer inspection, ‘yeah actually totally … go for it. It’s cool, a bit weird. I like it’

As we sat waiting for our turn I started to examine the bottle. ‘Oh shit, this is a ridge filler’. We erupted with laughter. I think if I’d had a manicure before, I would’ve stuck to my guns and gone with it, but as this was my first time and I was already feeling a bit apprehensive & unsure about what to expect, I made a quick last minute swap for a light blue. 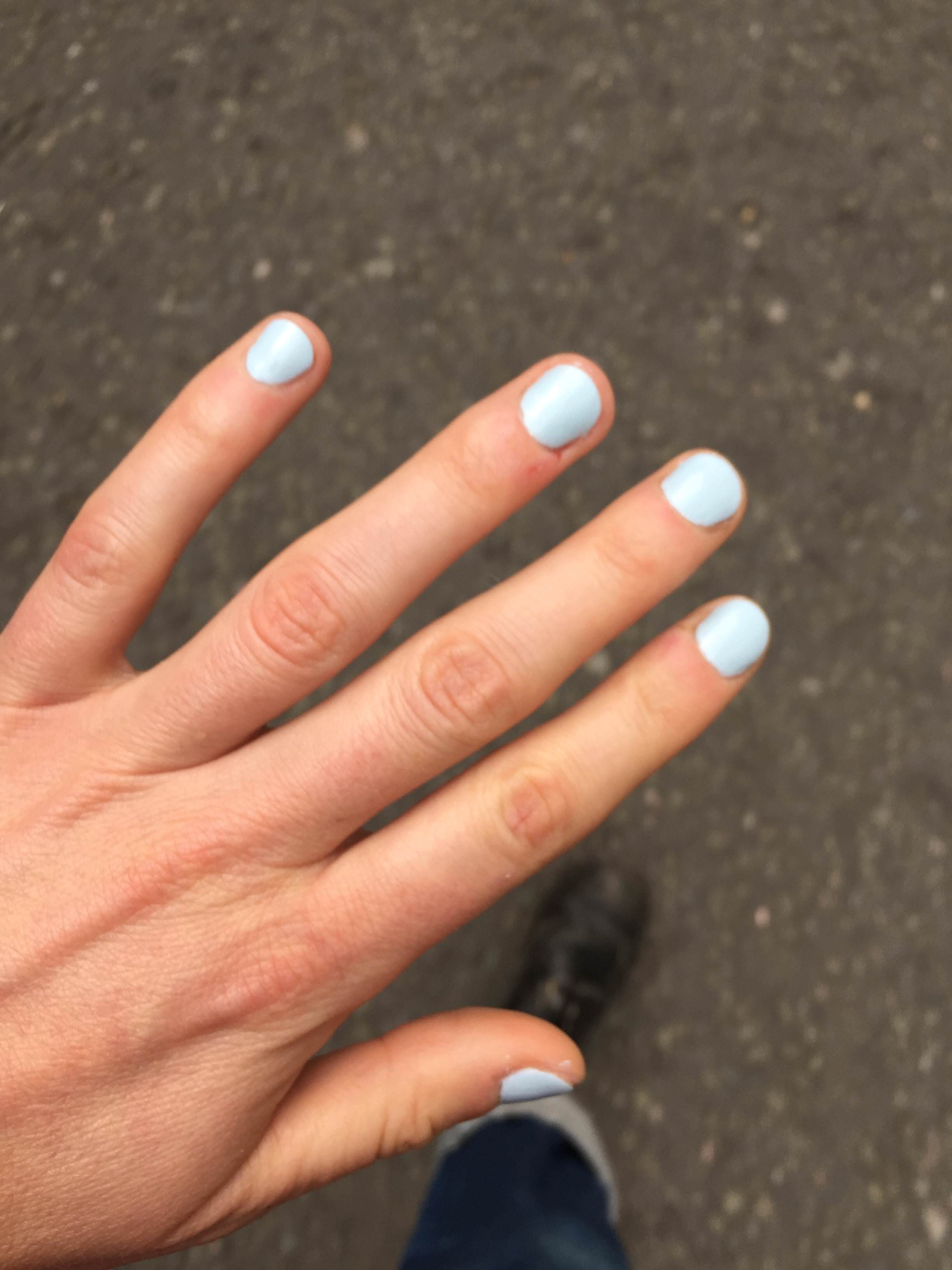 The lady who called me up was really nice. She wore a little crop top and jogging bottoms, separated with an unashamed & buoyant ring of exposed belly. My nails were trimmed and filed, my cuticles cut with machine-like precision. She smiled as she smeared a tropical scented lotion over my hands and rubbed it through my fingers. The paint was applied with exacting strokes. Brisk & purposeful. I watched DC beside me. Her guy was wearing a mask as he used some little machine to grind down her acrylics. I was glad I’d gone for the easy option. Next step was to sit with my hands under the drier. It wasn’t clear where to place them and I probably wasted some time under the fan at the front instead of the UV lights at the back. But we got there in the end.

Back outside. Almost immediately I regretted chickening out with the filler. I thought I’d go back the following week and have them re-done. Thought I’d get some pictures for this piece, maybe even make a regular thing out of it. But life’s ticked on. Not only has time been lacking but the spare tenners are few and far between. For the foreseeable future these little fingers are au natural, ready to lunge into expletive gesture should anyone…