Versatile Records is an imprint run by Gilb'r, arguably one of the most distinctive imprints in electronic music, which has been responsible for the release of work by the likes of I:Cube, Pépé Bradock, Joakim, Zombie Zombie, Dj Sotofett, Etienne Jaumet, Cheek, Dj Mehdi and even RZA. The French label rose to prominence during the golden era of French house music which was championed and pioneered by the likes of Thomas Bangalter, Alan Braxe and many more. However, Versatile has always had leftfield leanings and as such some of the music released on the imprint has stood the test of time and holds a resilience which is remarkable and impressive. You'd be surprised by how many of those early records still lurk within the bags and crates of some of your favourite dj's.

The label was founded in the mid 90's by Gilb'r, a man of excellent taste and sophistication, as well as being one of the sickest dj's and producers out there at present. His consistency is remarkable and the way in which he has built up the labelover twenty plus years is truly admirable and unique.

When discussing how best we might approach this feature we both agreed that we wanted to highlight the personal experiences and history of the label, it was at this point that Gilb'r revealed that he had a collection of material recorded via VHS which shows the parties, meetings and studio sessions behind what has built up much of the label itself. We are delighted to bring you that now, alongside an interview and a Versatile megamix which we are honoured to be able to feature.

1. So, the label has come a long way, did you ever foresee it might be such a long term project?

Absolutely not, the same goes as a DJ actually. I would also have never imagined that some of the artists would share the same path along the way.

2. You recently shared old studio footage with I:Cube and RZA - do you have any moments of which you are most fond of during the labels legacy?

This one is definitely a top memory. I knew a friend (Jerome from Irfane)that knew the RZA so I decided to ask. We met in a conference room of a hotel in Paris, at a large table, where I arrived with my computer and some portable speakers to play few beats. RZA agreed on a track and gave us a meeting in Berlin a few weeks later, he had a show and we recorded it afterwards. I remember Cube and me taking the train on a cloud, then arriving there to directly go to his live show.

After that, we were in his hotel room waiting to get picked up and go to record at Jazzanova studios, where the track was made.He had an MPC and was making beats. I clearly remember him jamming a sample of Joe Dassin’s "L’été indien" - a major 80’s french hit with some beats.

To be in that room was surreal for us already. A lot of fans were in the hotel wating for the RZA and with luminary intuition I proposed that we exit through another hotel door. Then we hit the studio.

He was fully into it, writing on the spot and directing the sound engineer. We recorded all night as we were taking the train back without sleeping. At 5 in the morning we had 2 hours left and a guy from Killarmy (Beretta) came to record on another jam that we kept on a Chateau Flight LP called "The Meal". The track is called "Live at la Rotisserie" (with pretty fun lyrics).

Then 7 on the train with no sleep…Crazy.

I also had a recording session with the late Francis Bebey which will remain a mistery, as I lost the files which sucks. We were never able to work on it...

We used many musicians when recording too, which was always great as Paris was a centre for musicians from all around the world - such as Diblo Dibala (who plays guitar on Kolingo’s Chateau Flight tune). We also had a fun session with Osunlade (nothing came out, just a vocal on a Chateau Flight track called "Welcome").

The session with turtle shells from Belize, that you can hear playing on "No Time Is The Right Time" from my new ep, was amazing as they were playing over empty turtle shells, playing different notes and tones.

My sessions with Dj Sotefett were great. Chateau Flight sessions too.. I wish we'd recorded all the music that we jammed. On our latest record,we made 5 tracks in 5 days, after a lengthy studio break across many years, that was amazing.

3. Has the vision or goal of the label changed since it began?

Not really actually, it just took some time to properly reach versatility.

I chose the name from hip-hop tracks where this word is often used. I’m quite bad at names but that one came instantly. I worked at the French radio station Nova in the 90’s where my mind was brutally opened (in the best sense) to all kinds of music, so I chose the name to reflect that.

It’s a cliché to say that people like categories, it was much more true in the 90’s compared to now. So we had to stick with taking the risk that sometimes people wouldn't understand. To go from Drum & Bass, to more pop stuff as the early Joakim material was, or Kraut by Zombie Zombie - I feel now that this is totally ok.. but it took some time.

4. Is music as important to you now as it was when Versatile began?

I'm lucky that along the way i've met amazing people that opened my mind to a lot of stuff. I also have to say the present time is somehow the best for me as having my studio above Redlight records in Amsterdam allows me to hang out with great musical minds, from a lot of different backgrounds, which simply feeds me and inspires me with both personal ideas and A+R ideas too.

5. Describe your best or worst experience of label management?

Well - it’s when artists have too bigger expectations of the label, or are control freaks in a difficult way.

Just to give you an example - I won't name names. The record cover took more time to do than the record itself...

"Can you change the blue for yellow and make the space between those two elements different??"

And so on... Luckily it doesn't happen often, workflow and trust are great most of the times.

6. The visual identity of the label has changed through the years - has this been conscious and what do you try to achieve through the art and design?

Honestly, the visual aspect was never the most consistent.

The fact that the covers are this way somehow also reflects the label I guess. I find repetitive graphic patterns a bit impersonal sometimes. Over the years we've worked Sophie Toporkoff, a French designer, then Machine, Dutch designers still around, then La Boca and now Steele Bonus is in charge.

Also I:Cube was the exception as he did most of his own artwork and even sometimes for other projects like the Rex Lilusiivi compilation. One thing that's never changed - the logo that Dj Crabbe (big up) designed a long time ago.. 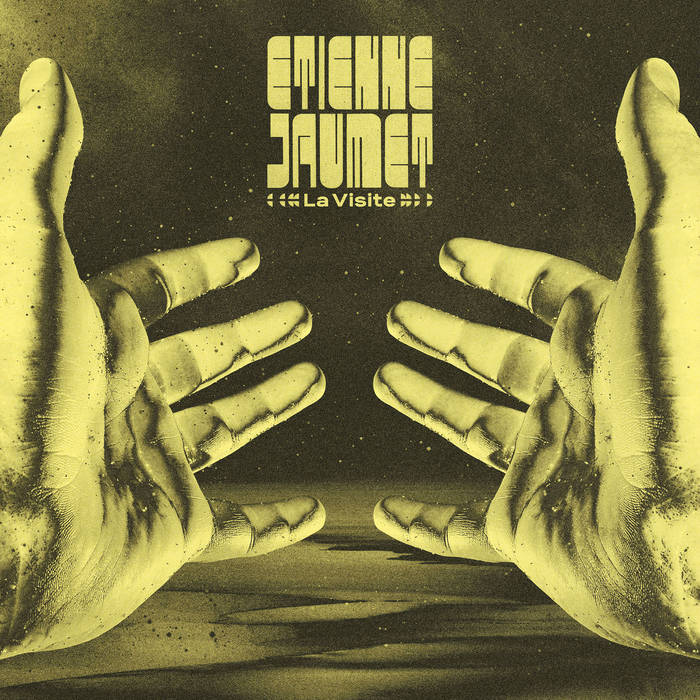 7. Quality control is important - do you have a set process by which you decide to sign or release a record?

It is totally empiric: i’m a dictator, I have to like it. What pushes me to sign a record is the personality in the music: I like to hear something unique which somehow truly reflects the soul of the artist.. I signed Zombie Zombie after seeing them live one time. Joakim sent me a lot of music before I decided to release it. With Etienne Jaumet it’s a different process, we agree on a idea and then he records very fast. I propose an engineer afterwords as to me that process is the most important.

8. What is your favourite Versatile release?

Ah, hard one. For sure the 1st Etienne Jaumet LP "Nightmusic" that Carl Craig produced in his Detroit studio. I consider that record a masterpiece.
"M Megamix" from I:Cube for its generosity and its craziness: more than 25 tracks as a mega mix,very ballsy. I would name others in six months.

9. As a disc jockey how do you feel that your own taste or musical presentation has changed and is this considered in which records you choose to sign to Versatile?

I have to say that to me it’s not very linked in terms of what I play versus what I sign. I try to naturally keep a balance between home listening music such as Fitouss and Hourriere separate from an I:Cube club bangers EP.

I like to be seduced by music and for me,it has to be instant. It’s like when you listen to something at the record shop, you know within seconds if you are gonna like it or not. I react the same with what I sign. I like this kind of animal reaction. So much happens at the same time and your brain has to analyse it all very quickly. The sounds,the structure,the effects, the production and the variety..

10. Is there anyone you wish you could work with again?

I know those who I wouldn't like to work with again...

I’m more curious about who I will eventually work with for the first time and this, you never really know. If 2 years ago you'd told me that I would record a whole LP with Ariel Kalma at his Australian house I wouldn't have believed you. This will be released in 2020.

I like when encounters just happen such as a collaborative album between Detlef Weinrich (Tolouse Low Trax) and the incredible singer and hurdy gurdy player, Emmanuelle Parrenin. That's gonna happen soon at the Versatile studio in Paris which I will produce.

"I started Versatile records in 1996. The first release was I:Cube, "Disco Cubism". A release that propelled us in front of the scene. Suddenly we were playing all around the world with our heroes. And that was not really planned. In 1997, I also became a father and that was the main reason that pushed me to get a dv camera. But soon I wasn't just filming my paternity, I took my camera everywhere on the road and here is some of it. It’s not at all about nostalgia. It’s more about a sketchbook of the begenning of the label:a time of innocence, naivety and great fun!

I’ve been sitting on over 120 dv tapes for over 20 years, so I tought it was about time to digitalize them and eventually use them to give a testimony of how it was back then. I filmed from 1997 till 2003, then I dropped the camera..The early Versatile days.

Special thanks to all the people in the movie..
Gilb’R
Edited by Claudio Zaia with the help of Gilbert Cohen"

In order of appearence in the movie: