Davide is “the brawn and the brain” behind Detriti Records, a Berlin-based label that has become our go to for an injection of heady post-punk, coldwave and electronic.

Initially beginning as a hobby, the imprint was started as a place to publish his own projects and the different sounds he was into, however weird or untraditional they may be. You don’t need a profile with Detriti, when it comes to A&R it’s all down to the music. Which is exactly the way it should be.

“It doesn't matter if you are still unknown. If the music you're creating is good I'll publish it, even if you don't have a Facebook page or an Instagram account. Every person has a chance with me, I'll judge only your music.”

Davide has worked in this way since the beginning and cites it as being one of the ingredients of the label’s success. It’s definitely a formula that works. Detriti has had a hand in breaking through some lesser known artists, most notably Belarusian band Molchat Doma.

The release of Etazhi, their second LP, was a big one for the label. Getting tangled up in YouTube's algorithms, the album garnered over a million views and sold out four times, bringing with it huge praise for the talented trio.

Although the label started in 2015, there were a few releases floating around prior to that from Davide’s own personal project Words and Actions, experiments in underground coldwave that really represent the intentions of the label from a music perspective.

It’s these influences that play into the visual of the imprint too. Detriti's designs are the work of Davide himself, the bicolour and lo-fi effects inspired largely by 80s DIY culture and cassette releases...

“From the graphics and aesthetics point of view my main inspirations originate from underground industrial culture. Also L.I.E.S. Records definitely taught me the importance of a clear graphic identity." 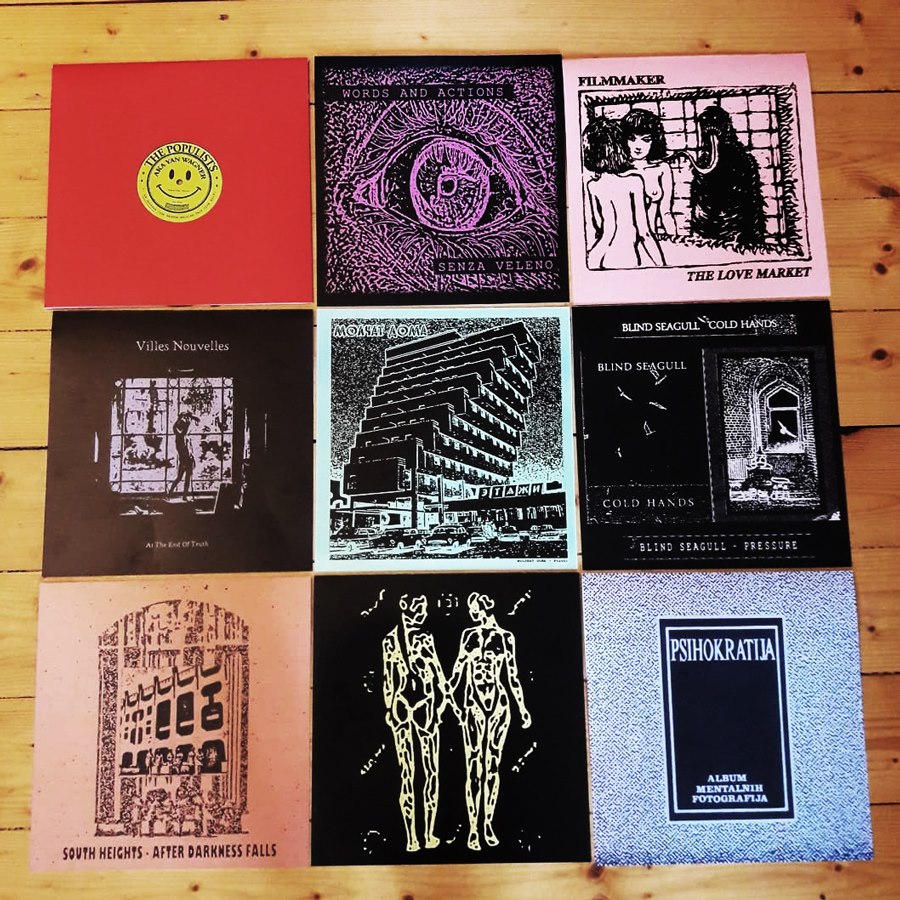 Although he had some firm influences behind the musical and visual elements of the label, in terms of the logistics of running it, that he had to learn on his own.

As Casper of Berlin-based label Mechatronica noted in their Label Love, bureaucracy is a big obstacle when running a label in Germany, and one that Davide has also had to overcome. Not only this but the distinct lack of information on PayPal makes it difficult to navigate the ins and outs of book keeping and paying taxes.

“What really surprised me is the total absence of references and guides. Usually when I have a problem I Google it and in the end I can solve it, but for this kind of thing it’s not so easy. Sometimes it takes me weeks and months to solve specific issues.”

These hurdles became all the more apparent as the label began to gain more traction...

“The steps necessary to shift from a DIY label to something more solid are absolutely nightmarish. The “system” vividly shows you how it cares about you only when it's time to take your money and absolutely nothing else.”

It's not been an easy ride for Davide doing all of this alone but hard work and perseverance, as well as a palpable love for the music he's releasing, has certified Detriti's position as one of the most interesting labels operating in this underground post punk sphere.

Aside from the releases being well received though, the biggest achievements for Davide are personal. Ultimately Detriti’s success has shown him that he could do it all along, even if he did have a late start in the game. Something he hopes will inspire others too...

“I’ve proved that it's never too late to build your own professional career and follow your dreams if you are determined. Consider that I started all this when I was already in my 30s. Usually at that age people have already given up hope…”