There is an art to collection. Collectors are wonderful people. They take the time to invest and care for what others might not, following the intricacies and development of whatever it is they choose to invest their time and money in with exquisite attention to detail.

Dave is a collector of rave flyers and the founder of Phatmedia. Over the years he has amassed a sprawling collection of artwork which tells the story behind endless parties. Parties which inspired a generation of fun loving dancers and free spirits and established the UK as a cultural hub for dance and electronic music.

His approach to documentation was most recently included in a beautiful online exhibition which shows the breadth and diversity of his collection. Music, Makers & Machines has been running online, showcasing some of the figures who have had influential impact on the evolution of electronic music and the culture which circumnavigates it. It includes interviews, art exhibitions and more. Hundreds of Dave's flyers have been included to represent the diversity of rave culture in the 90's, collated and assisted by the Museum Of Youth Culture.

The artwork itself is as broad and varied as the parties and people who celebrated rave culture were. The no holds barred approach to their design has had striking influence on DIY culture and has gone on to inspire graphic designers and creatives the world over. From futuristic science fiction landscapes through to bold straight laced typography and wild colours it cannot be underestimated how important the aesthetic of this cultural movement was. Not only are they beautiul pieces of art but an insight into a lifestyle and a movement which has defined a generation.

We spoke to Dave about his own experiences as a raver, discussing why he fell in love with flyers and talk about his approach in the present.

So first of all, how did you find yourself with so many flyers?

"I began collecting from the record stores around Plymouth with a group of mates aged around 13 and then a few years later we would get given them outside the raves and clubs. My cousin would also post the London flyers to me from BassBox Records in Essex.

When I moved to London in 2002 I became aware of other collectors buying and selling on ebay and also using the raveflyers.co.uk message board. That's where the collection really took off as I would buy, sell and trade collections through contacts made from both of these platforms and have continued to do so today and is why I have over 20,000 now."

What draws you to them? The design, the memories, the history?

"Instantly the designs. When I was first handed a flyer I’d never seen anything like it, they were our way into this underground culture. It had the look and feel of something only we could know and understand. Many do hold memories for me too but these days it is a mix of the visual aesthetic and their place in the history of UK house music."

Describe your experiences in rave culture, what is your most memorable night?

"We were listening to mix sets by the likes of Carl Cox at The Eclipse, DJ Producer at Universe and Ratty & Sy at Fantazia but I had to wait another year or so before I could get into a rave. That event was Dance Planet at a packed-out Plymouth Warehouse in September 1993 just 2 weeks after my 16th birthday and is still one of my most memorable nights. What an introduction to rave. Breakbeat, hardcore, techno, jungle a bit of everything with 2000 other sweaty ravers. A lot of the others since blur into one but this one still stands out for me." 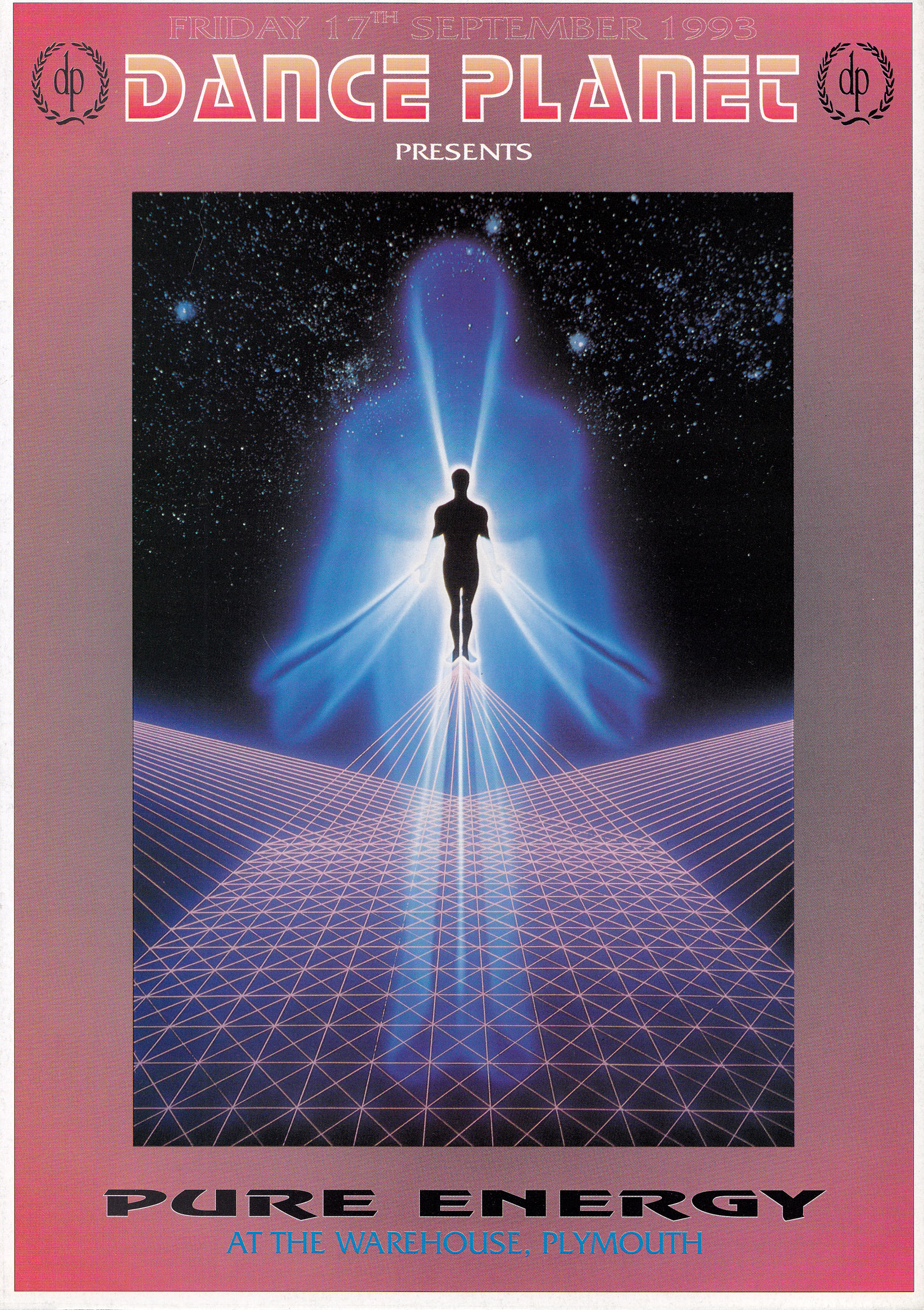 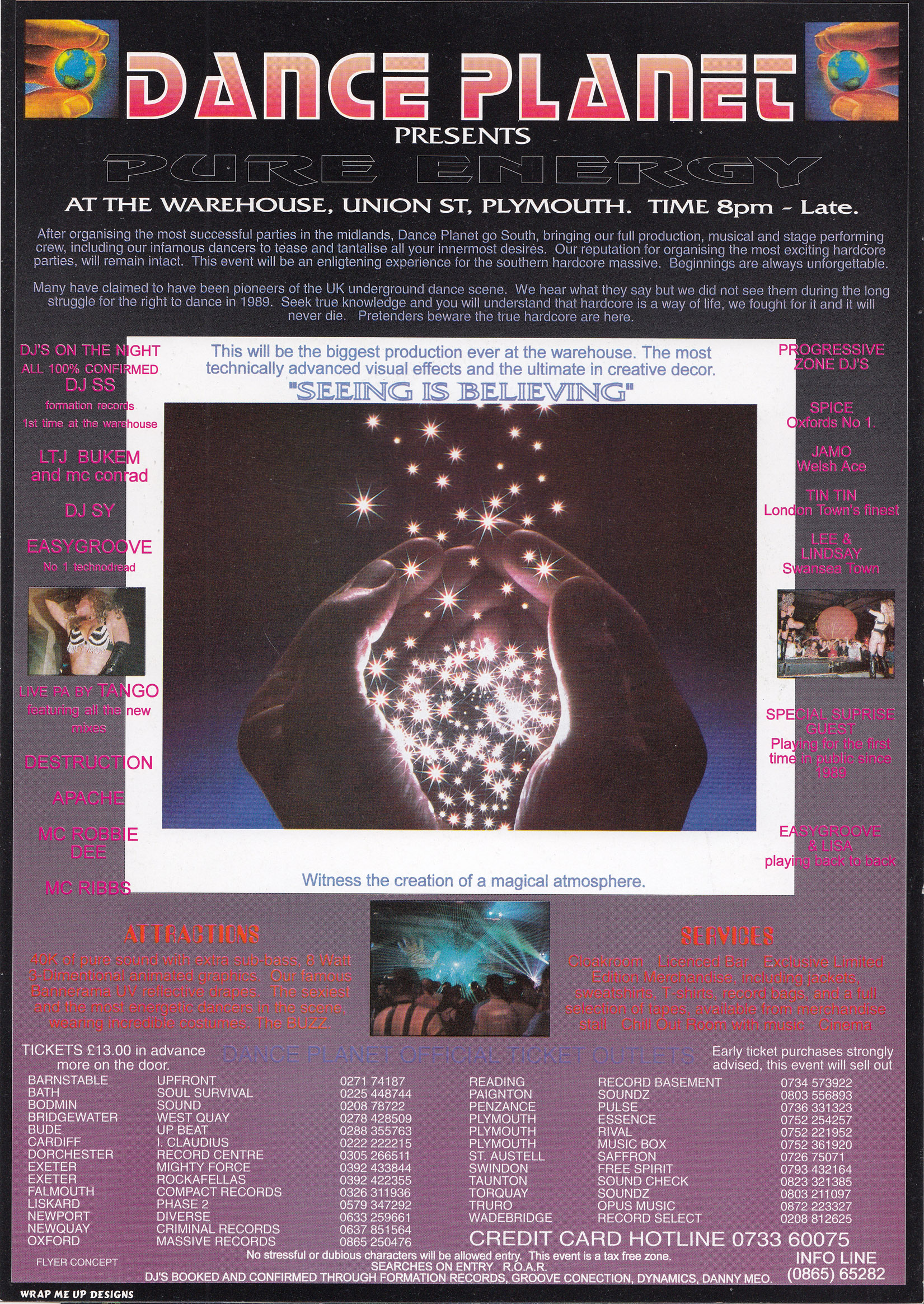 Why do you feel it is important to document and archive the material?

"It is so important to preserve these flyers for their history, provenance and cultural impact they have. The archives are used daily by people from many countries for research, resource or simply reminiscing. Each flyer has a story to tell that may otherwise get forgotten and it’s something that needs to be told and recounted and taught to the new generations. They represent important moments in not only dance music but the history of the UK in general."

Is there any particular highlights in your collection, either in rave memories or design terms?

" Shoom 9th November 1988. Stephen Reid designed this for Danny Rampling’s regular balearic house night which had moved to Busby’s in the West End. An iconic design that was die cut into a heart shape and excellently printed in bright colours on a glossy card finish." 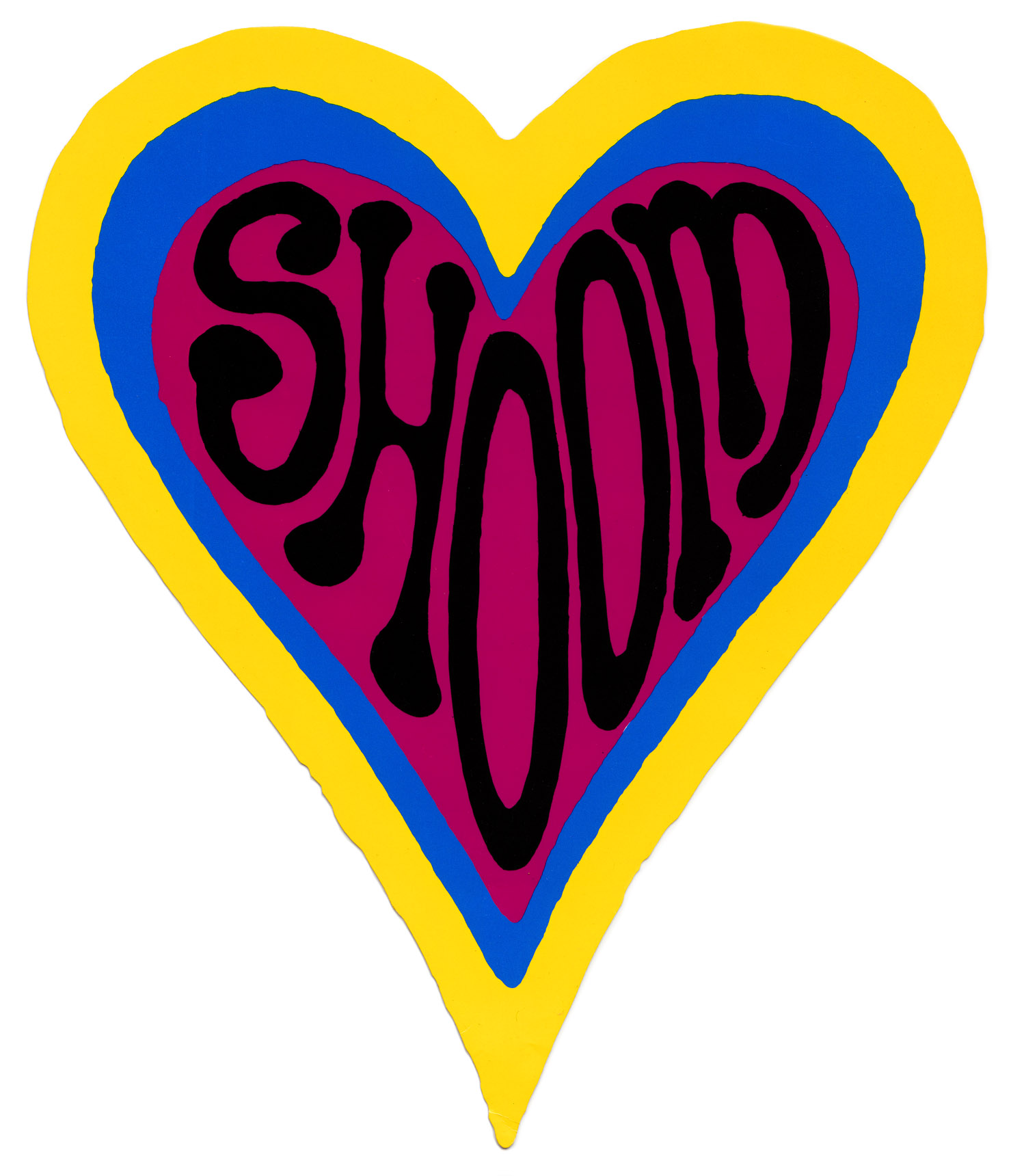 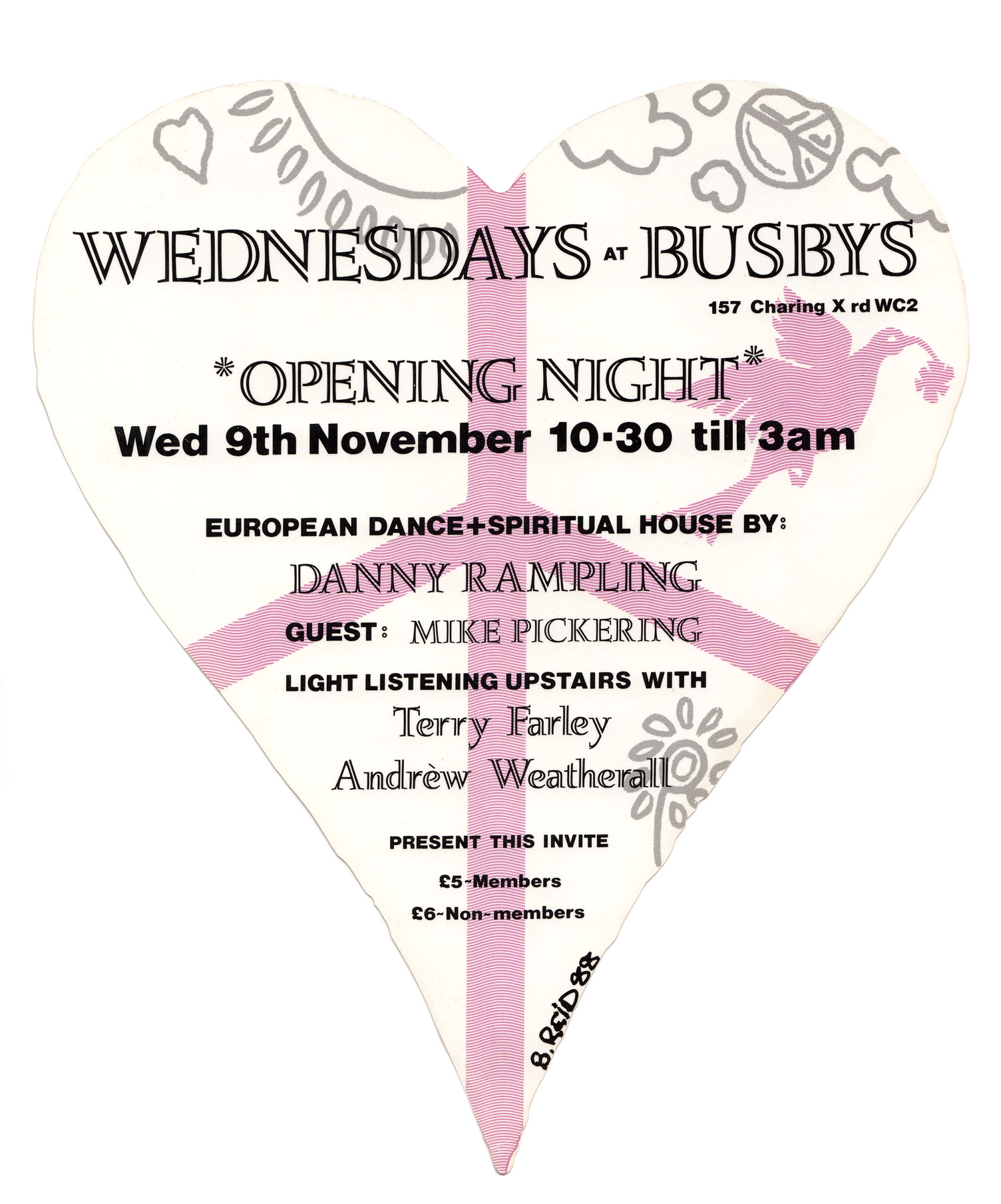 "Hedonism 26th February 1988. This flyer was kindly donated to me by the promoters of Hedonism, it is for their first legendary event held in a warehouse in Alperton Lane, Wembley. Josh Wilkins designed this rare beauty inspired by Roxy Music, he recreated an image from The Face magazine and the result was perfect. The flyer was then produced to fold in the middle so it would stand up with the top of the head die cut to stick out above." 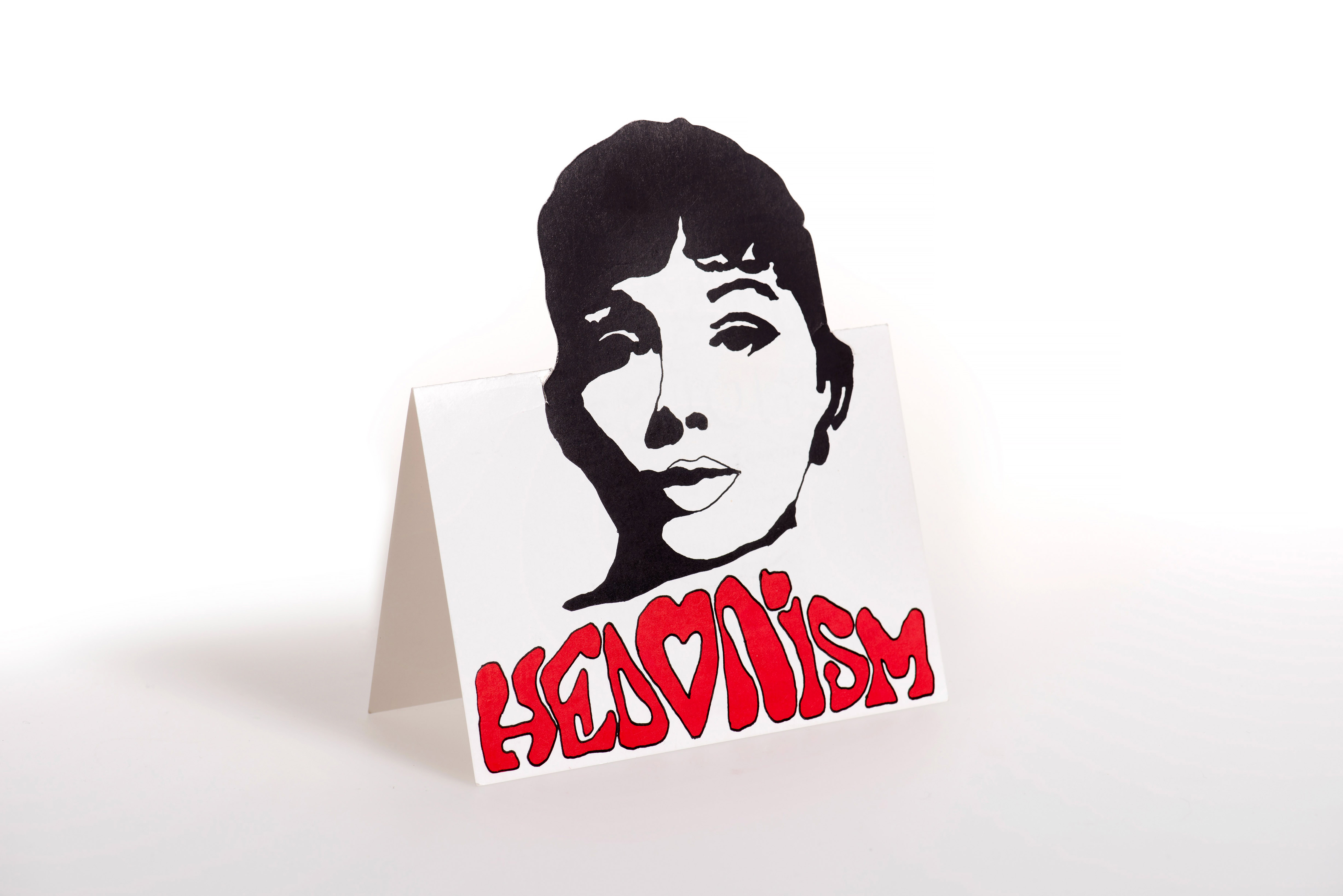 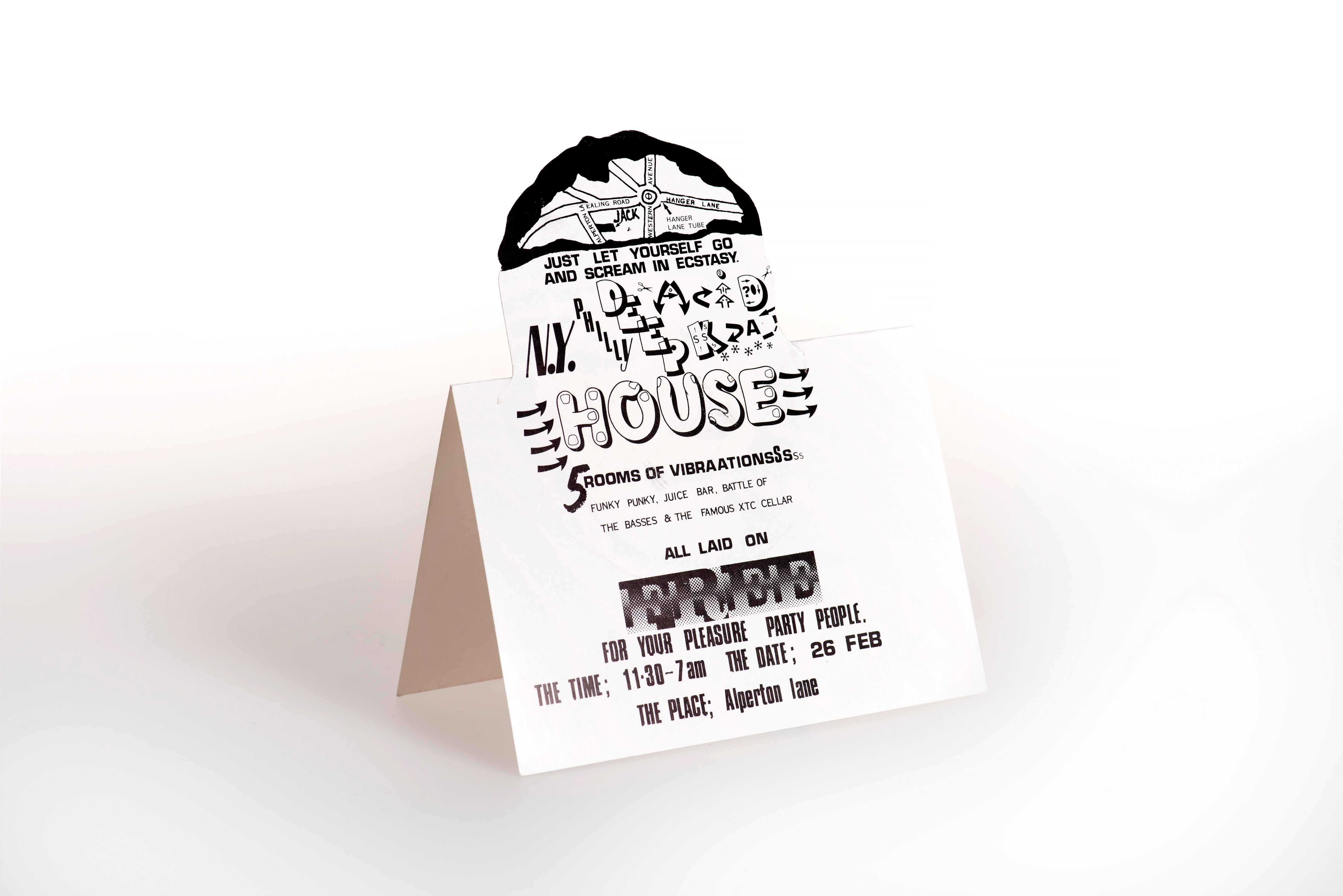 "Aciiiiid House Party 27th October 1988. This stands out more in sentimental terms to me, it’s a tatty, dog eared A6 sized flyer which sits framed on my wall. A simple design, green and black with a trippy pop art image. It’s very fitting with the flyers of 1988 from London but is the oldest flyer I have from my hometown of Plymouth. Little is known about who put this on so if anyone can help please get in touch." 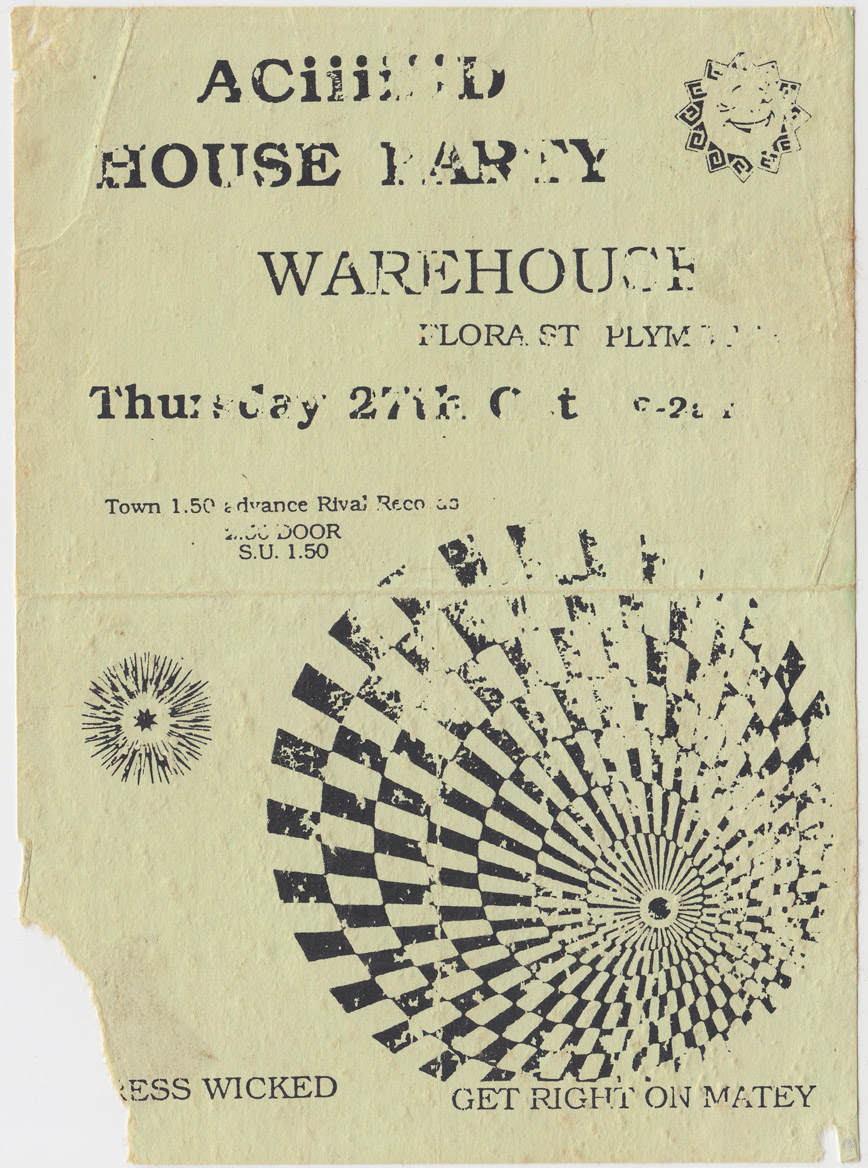 You got into raving quite young - what drew you in at such a young age?

"A friend at school called Nathan got me into the Madchester era bands like Happy Mondays, The Farm, Charlatans and Inspirals which totally changed my musical outlook.

Near the end of the second year we managed to get a few tapes handed down to us from some older lads, Carl Cox & Sasha at The Eclipse, and we were like woah, what is this! We were hooked, never heard anything like it. We were mesmerised even and from there it was our mission to find out all we could about rave. DJs, MCs, flyers, the clothing and everything else that went with the scene."

How do you relate and connect to dance music culture of the present?

"Ive got an eclectic music taste these days but do still get my house fix from stations like Vision, Select, Eruption or Centreforce which is great as I can pick up on new artists like Bicep, Peggy Gou, Mason or CamelPhat which are all making music I really like.

What I loved was selling rave flyers at an event like The Rave Story hosted by Billy Bunter where I can set up a flyer stall and got to meet young people who are interested in the oldskool scene. There was due to be a huge event last summer but of course that was cancelled.

I do go to the occasional festival like Junction 2 or Lost Village and still venture out to the odd oldskool night especially if Richard Raindance is hosting but my clubbing days are over really." 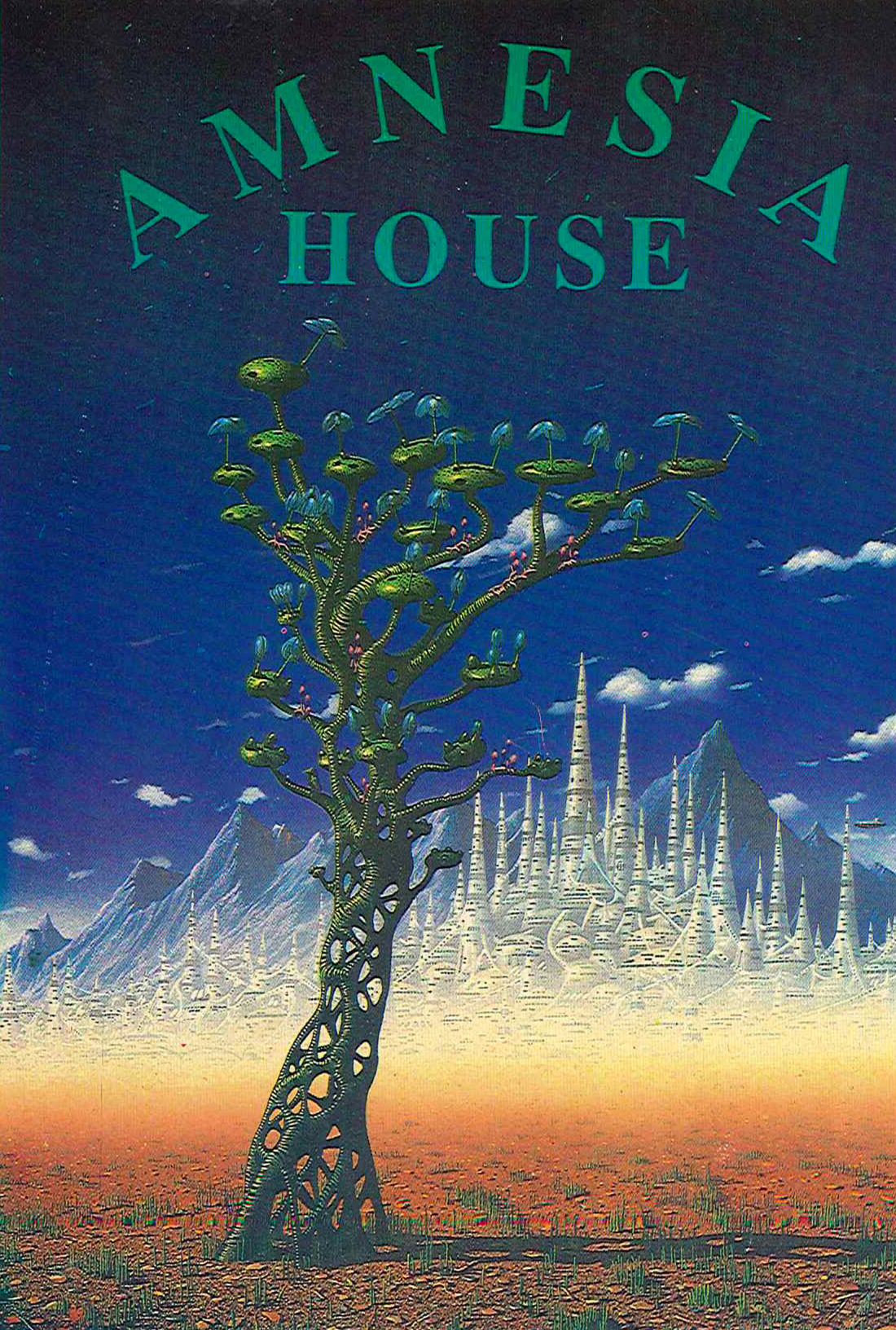 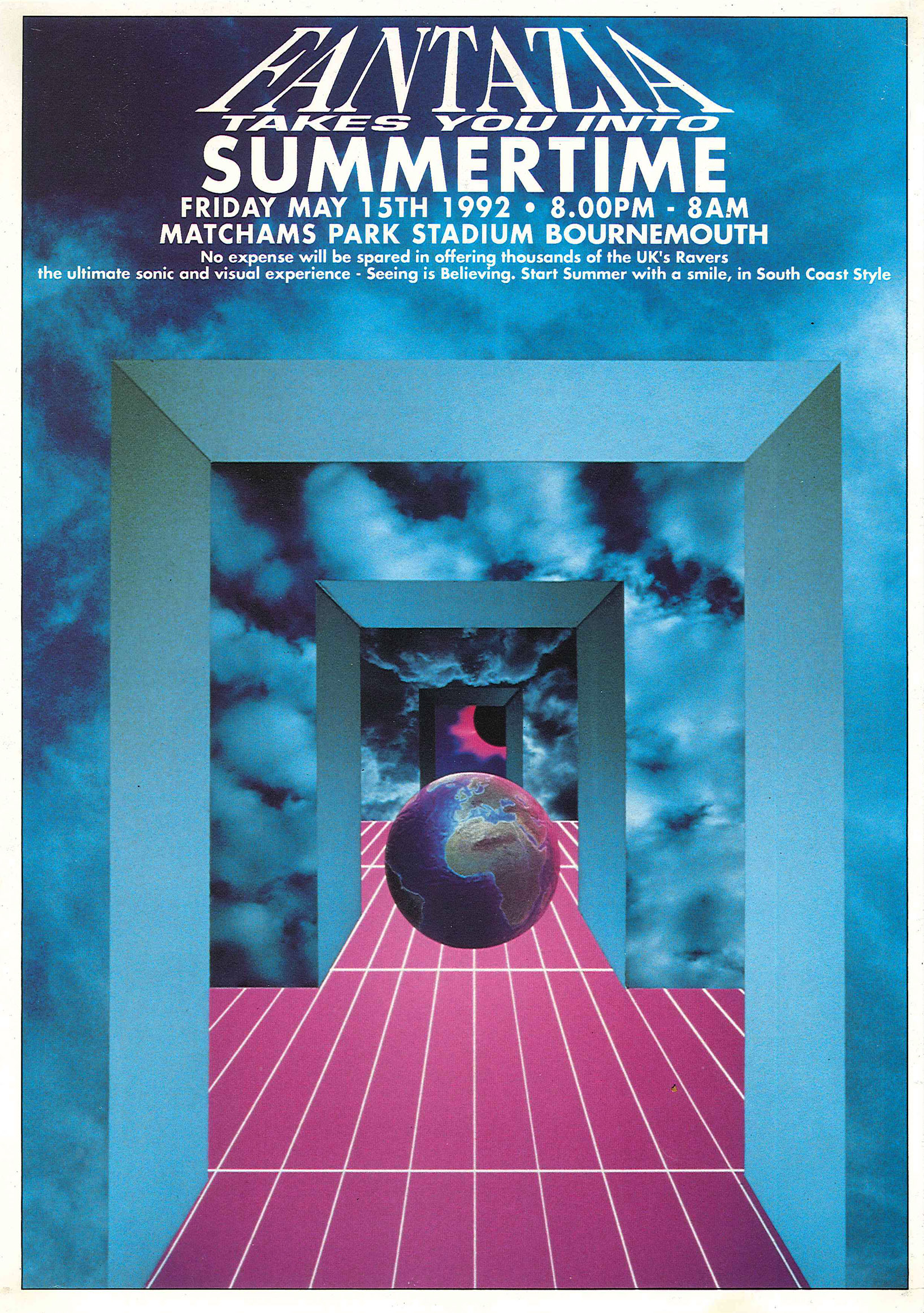 Do you feel that rave culture is documented and credited with the significance and wider cultural impact it had?

"Yes and no. Often the scene is documented in quite a formulaic way. Ibiza, West End clubs with Spectrum & Shoom, a bit on the M25 orbital illegals, Hacienda and finally Cream and the rise of the superclubs. These are all vitally important but so much is left out. Rave At The Cave, Biology, Weekend World, Blast Off. These guys were breaking into warehouses while the West End elite had the club nights going on until 3am.

There have been a lot of documentaries made recently. Jeremy Deller made Everybody In The Place, Sky Arts had a series and the BBC 5 Live pod cast series Ecstasy: The Battle Of Rave. These were all good and touched upon what I have mentioned above but not enough is done on the breakbeat scene after acid house was outlawed and rave was licensed. Eclipse, Fantazia, Obsession, Amnesia House and so many more.

There is yet to be a sufficient portrayal on this era of the scene on mainstream TV. Up and down the country 100s of 1000s were going out to all night events every weekend and even week nights. Hopefully the resurgence in interest will continue to build and we will soon see this covered."

The full exhibition is online and free HERE. Below are some of our hand picked favourites... 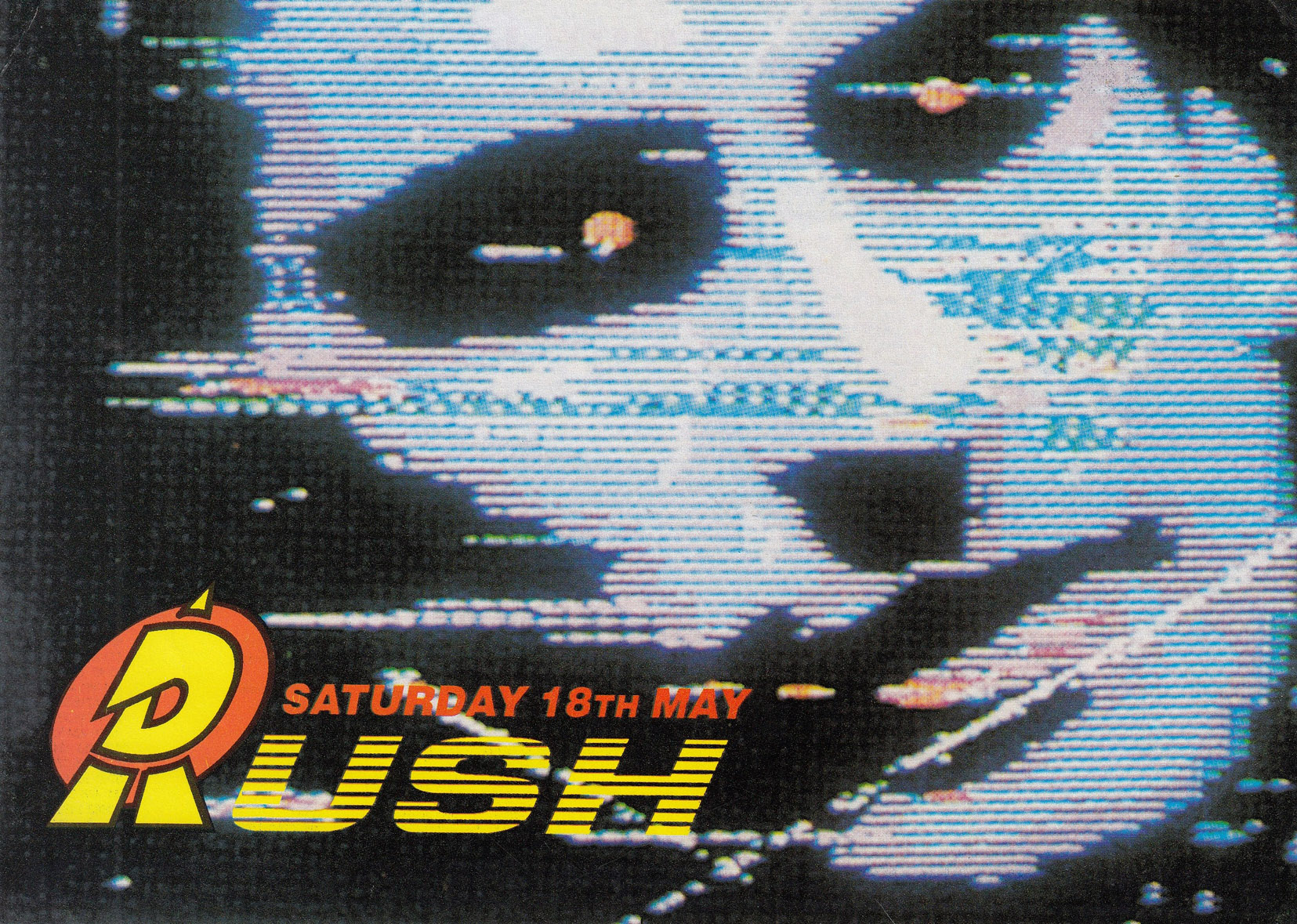 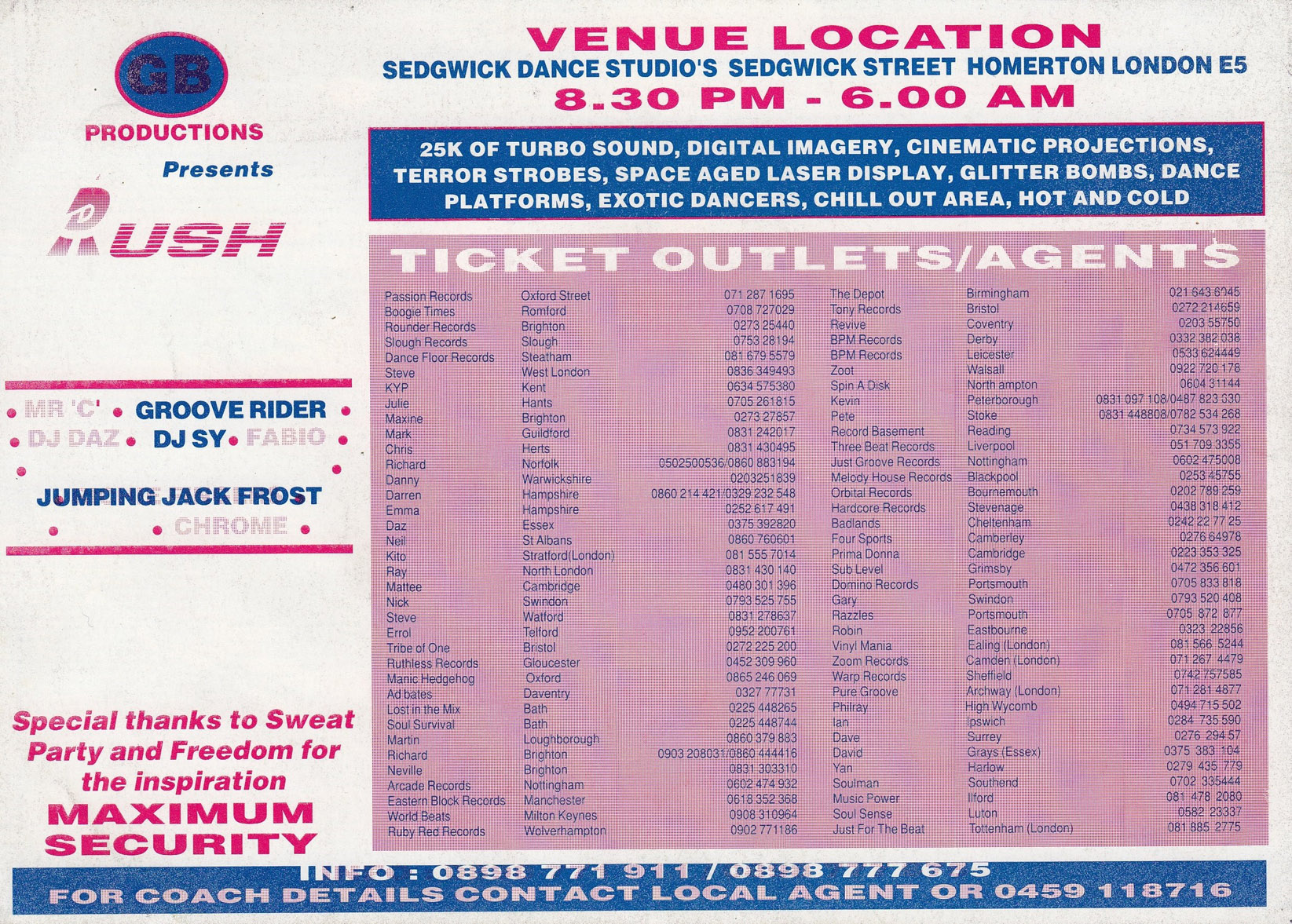 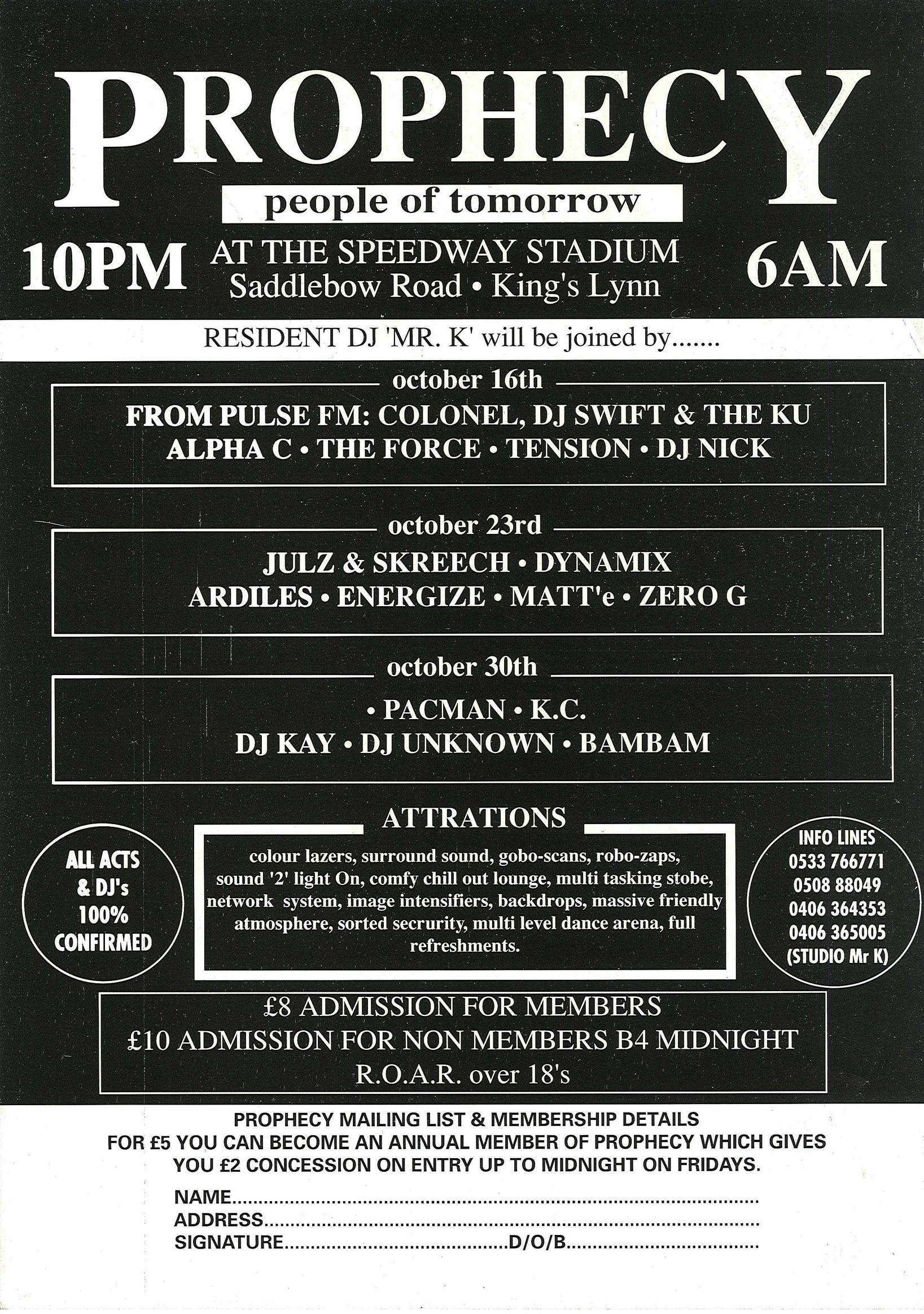 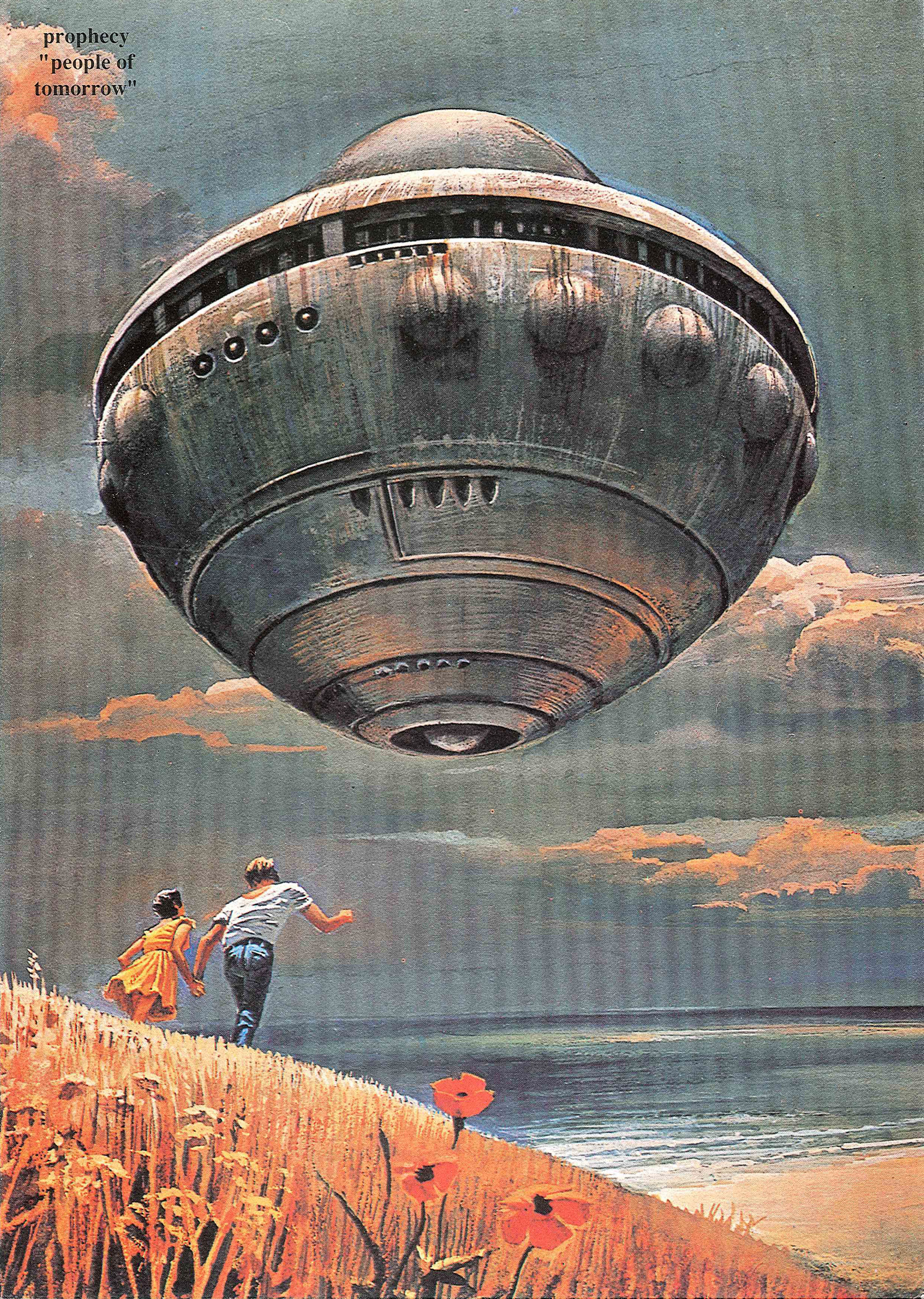 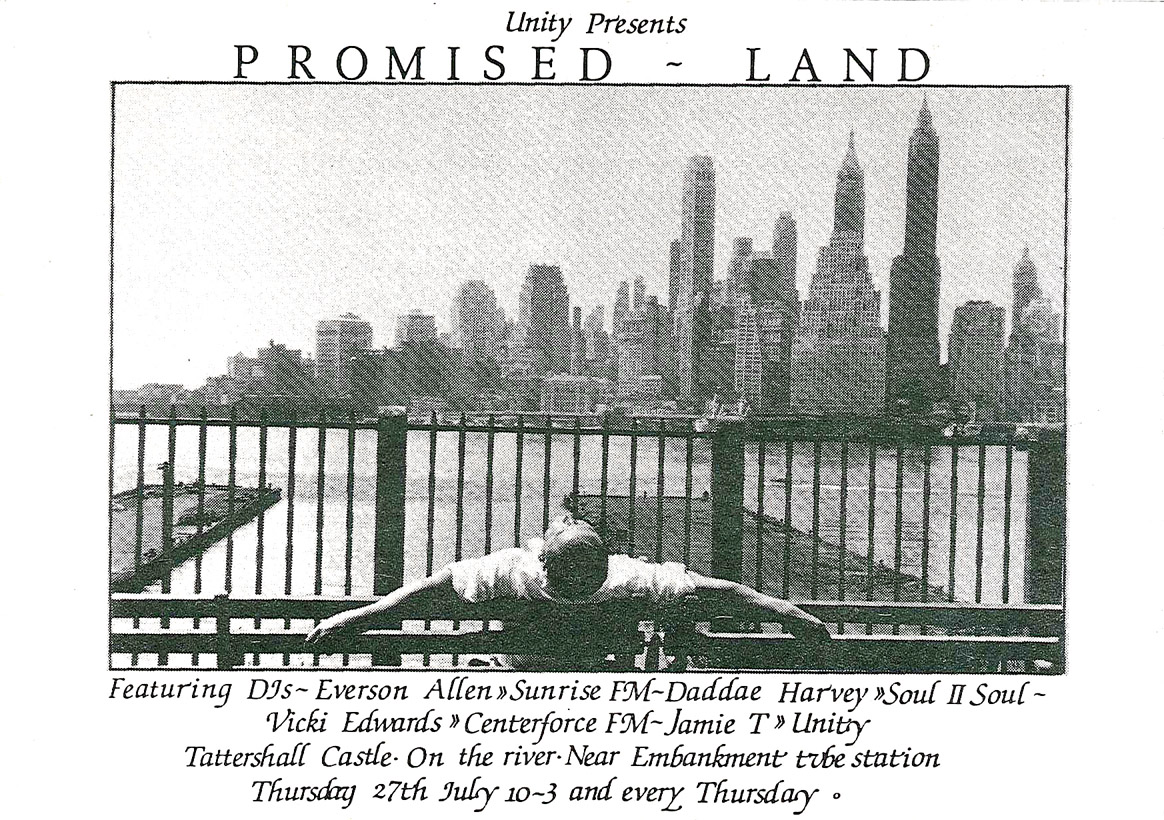 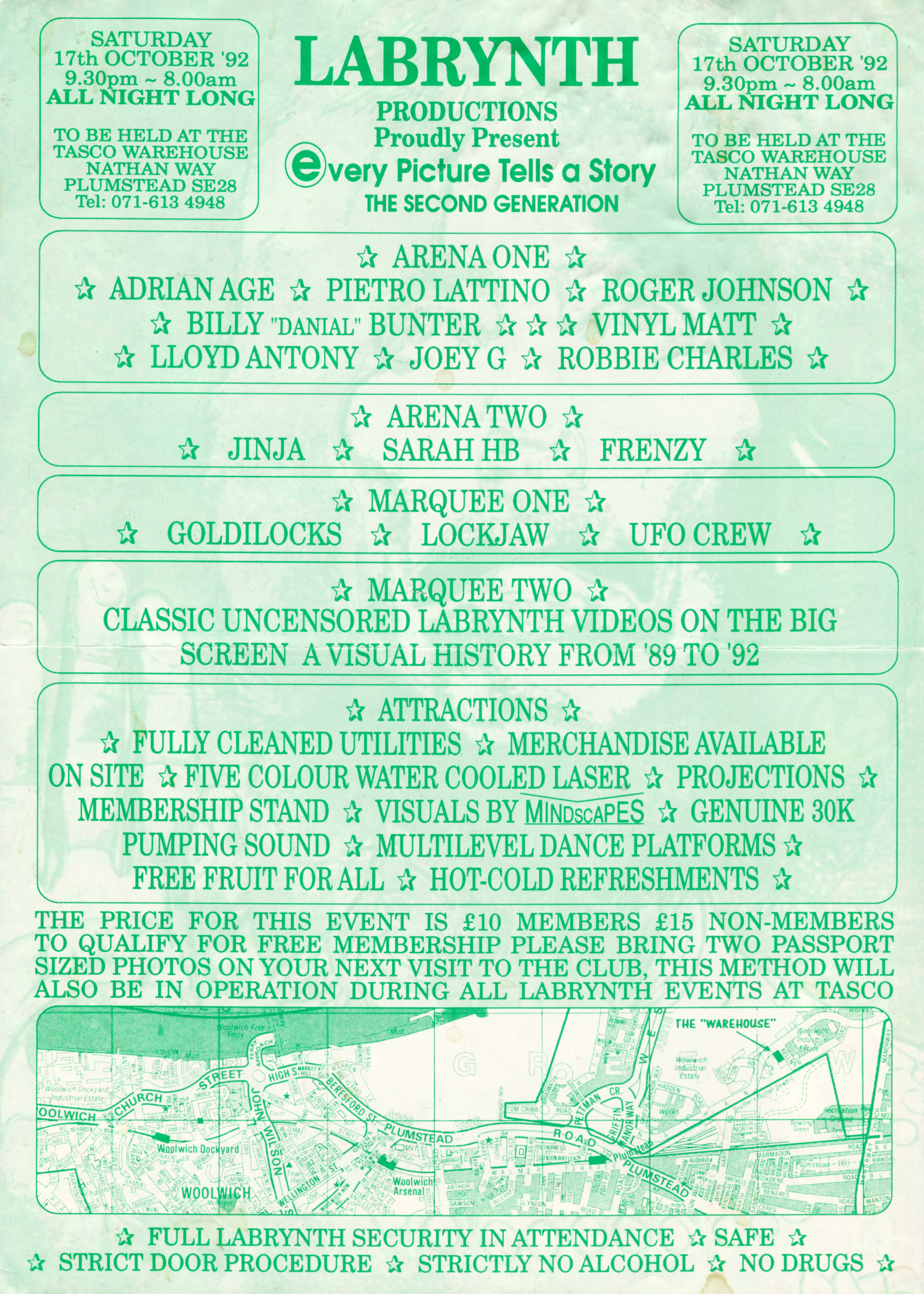 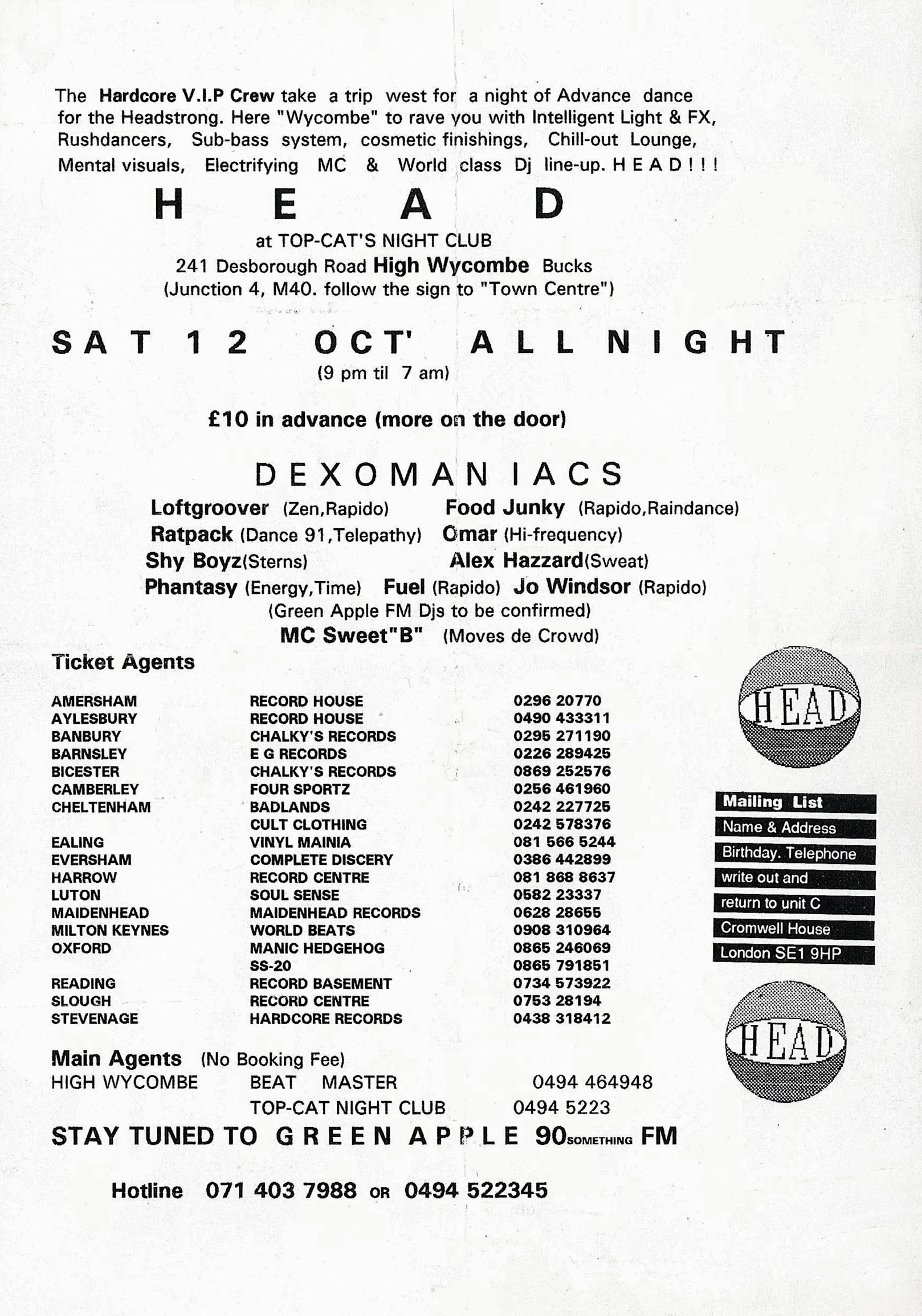 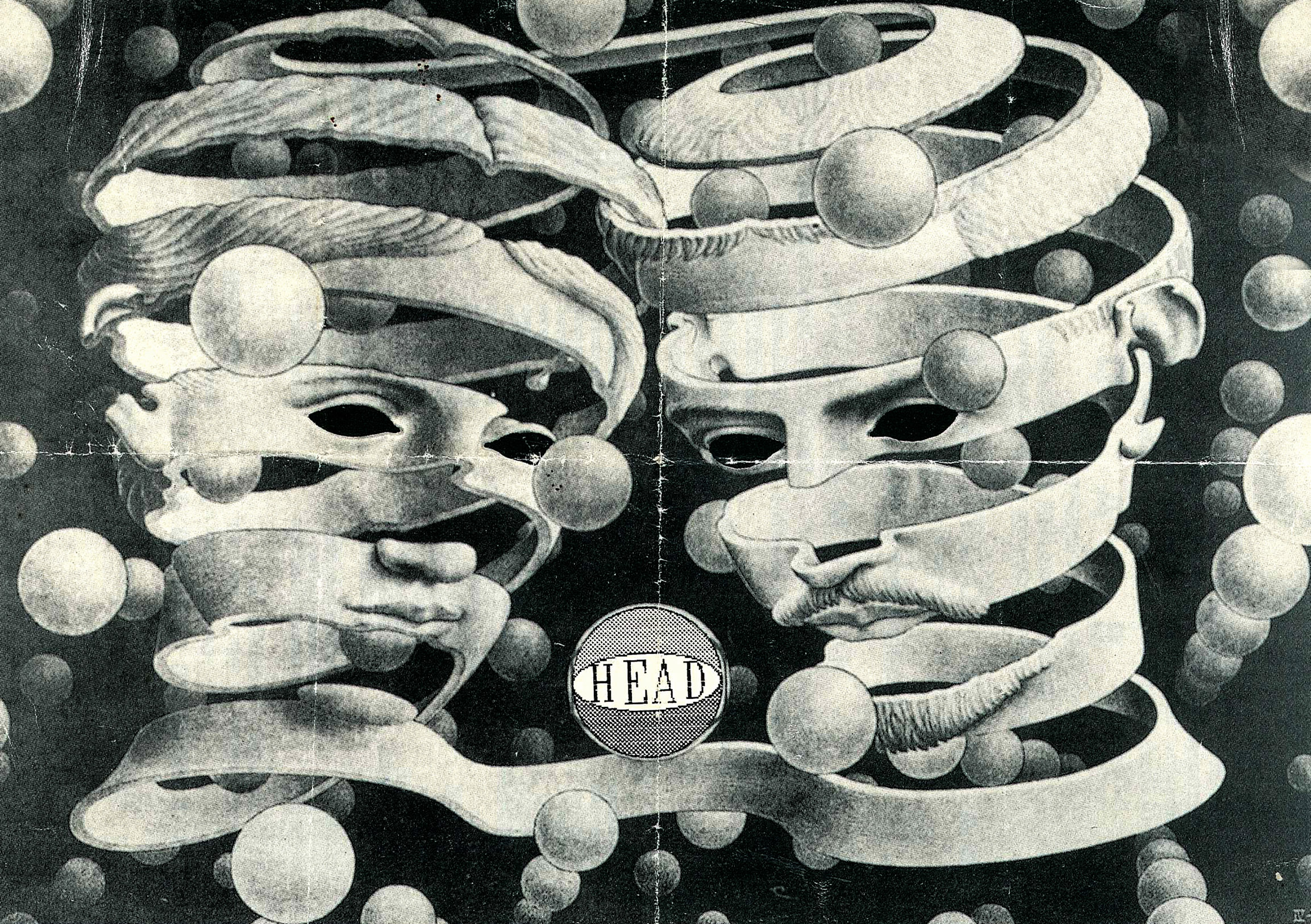 The infamous story behind one of Manchester's biggest records and a dodgy label behind the scenes.

Gone To A Rave: The Story of De Underground

Run by Mikey De Underground, Cool Hand Flex, Uncle 22 and Randall - this is the story of one of jungle's most prominent record shops.

Gone To A Rave: United Tribes of 90's Napoli

"United Tribes was an ideal for a living for some of us."

Gone To A Rave: The dub-informed sound of Rockers Hi-Fi

Ahead of a forthcoming reissue EP on Seven Hills Records, Michael Lawson catches up with the oft-overlooked duo.