“I’m not sure I’ll ever find a solution, but that’s the whole point, in fact that’s what makes life such an excellent adventure.”

“I’m not sure I’ll ever find a solution, but that’s the whole point, in fact that’s what makes life such an excellent adventure.”

We live amidst an age of perpetual doubt and foreboding uncertainty. It lurks suspiciously upon each corner, a mysterious monster with the power to meander, weaving between our own perception of fact and truth.

However, this is the very beauty of life itself: each day a  roll of the dice, the outcome anyone’s guess. DIY is in our very nature and our every decision, we just haven’t realised it yet.

Describe the role that philosophy has played within your own artistic approach? Are your paintings crafted thematically?

I’d describe myself as an enthusiastic amateur really. I’ve maintained an interest in philosophy since my furrow browed, long mac wearing days at Manchester University. I like to find themes or problems that I’ve been scratching my head over as a starting point for any collection of paintings, so that’s where the subject feeds into the process I guess? It can go off on some odd tangents, but I always have that one theme in mind when working on the pictures. So for example; ‘Everything is Turbulence’ was about the Occult power of the imagination and the intrinsic uncertainty and chaos at large in the universe, which led onto ’The Explorer’s Chronicle’ which again looked at the importance of the imagination and mythological constructs in scientific discovery.

‘It’s Alive’ was largely about secular animism and a splash of panpsychism, which are basically ways of thinking about how we interact with the objects around us and how those objects might direct us.

‘Alone’, my 2019 collection was really me finding a way to respond to the death of my father and the fact that I found myself without any parents. But it broadened out into a discussion about the pros and cons of isolation. I concluded that no matter how brilliant or profound a piece of art or music or idea might be when you formulate it, it only truly has meaning when it is shared. I’m not keen on nailing my colours to any particular mast, so I like to take bits of wisdom from all over the place in a vain attempt to make sense of things. I do constantly struggle with a profound pessimism that comes from reading too much Schopenhauer at an impressionable age. Not the most cheerful of thinkers but luckily I think you can see enough joy in the world to have at least a sliver of optimism.

My new collection “When the dark is light enough” examines the structure of the hidden fragments that hide in the things around us and discusses how, due to our faulty human perspective, we are often mistaken as to their nature. This is showing at The Union Club, Soho March 4th – 15th.

If I had to lay down my pretentious philosophical cards, I’d say I like to adopt a realist ontological perspective, with a quasi existentialist hankering for some kind of idea of freewill! Basically I believe that all that there is exists outside of us knowing it or perceiving it and that humans have a misplaced arrogance about their importance in that reality. The universe contains many layers and aspects which we, with our faulty and limited senses, will never be able to apprehend but they exist nonetheless. What we can do is analyse how we interact with that reality and work out ways in which we might be mistaken as to its nature. We are imbedded in the universe, in symbiotic relation with it, not in any way outside nature. We are essentially just another organism on the earth and quite a troublesome one at that. But we do possess freedom and the possibility that we might yet be a positive force, if we so choose to be. I try to take long walks so I don’t get too worried about it all but I blame all this confusion for my hair loss at an early age.

For someone reading this at the festival; it might be that you are transcending your constructed post-industrial selves with the help of ‘meditation’ aids as we speak or perhaps you are just losing yourself in the ritual power of dance? In which case you might just glimpse another layer of being lurking in the trees. I think I need to lie down. 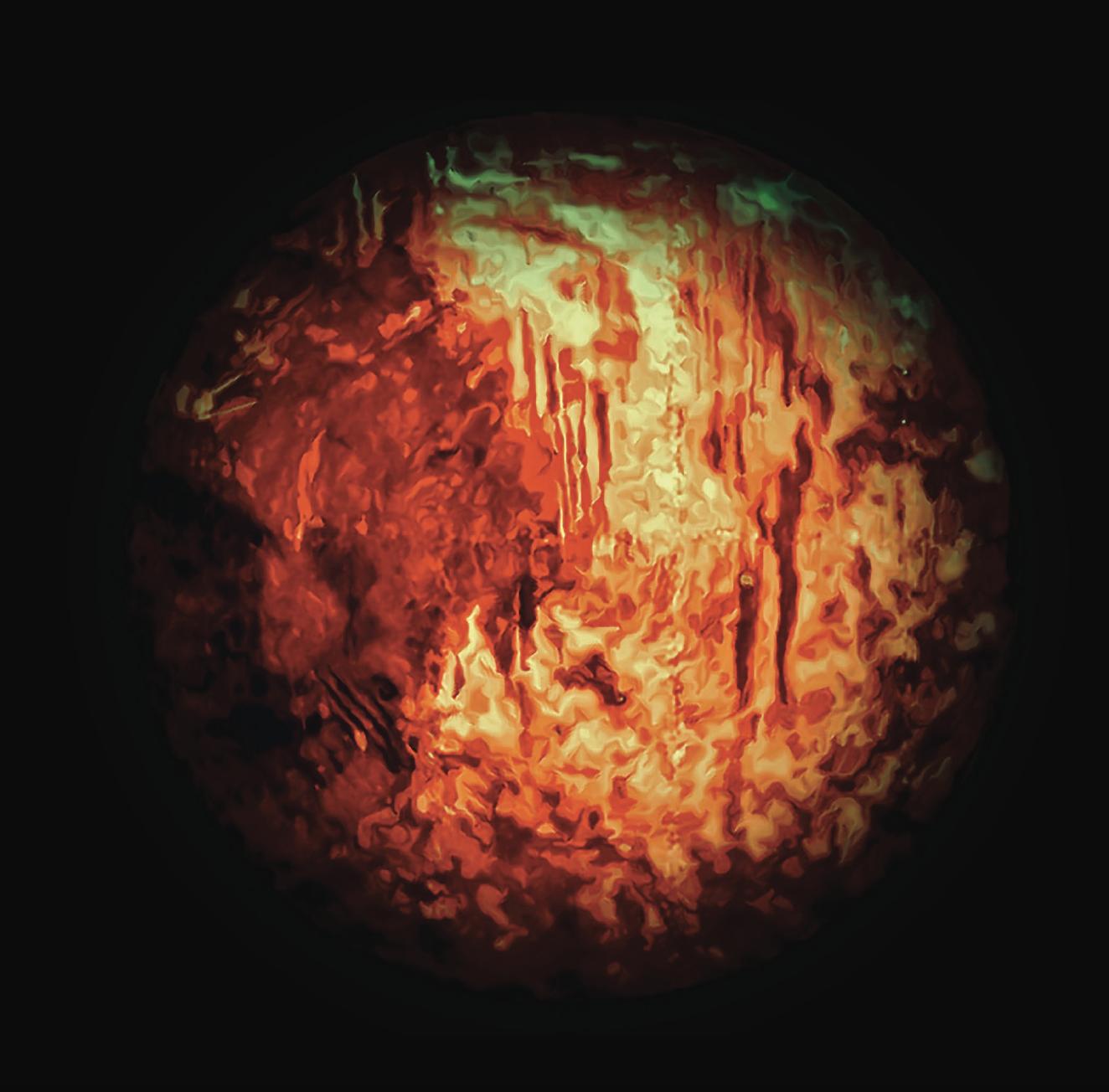 Does your artwork draw upon your own personal experiences and outlook on life or does it offer a chance to explore the realms beyond?

Both I guess. I consider myself to be a good Discordian, which is a contradiction in itself, so I think my outlook on life is based on not having one. I’m trying to embrace uncertainty and chaos, years in the acid house trenches have certainly helped with that project. As I said above; we are only able to access limited part of reality, so I can only explore what little I know and hope to discover more in the process. I think we often try to find simple solutions to very complex questions, questions we can never hope to entirely solve, so I’m really interested in trying to explore that tendency.

I think I use my art like a little kid would. I try and imagine aspects of the things around us that we cannot see but we sense might be there. That’s the essence of the occult in some ways, drawing out that which lies just beyond our grasp as wonky humans. I live with two very smart dogs, they can access a whole layer of perception that is closed to us, though it usually involves the privates of other dogs and piles of rubbish. So perhaps ignorance is better on some occasions. But I’m fascinated how differently they interact with things and how much wiser they are than me at times. I like to find patterns in stuff, I try to seek out the shapes hiding in the things around me. So quite often I will create what I call a ‘reported’ image by doing a painting, then photographing it, maybe only a small section of it even, then I process that to draw out patterns that you can’t see in the original painting but that are there nonetheless. Again it’s about apprehending the unknown, peeling back the layers to find out what we missed. I also like painting monsters because I do like monsters. 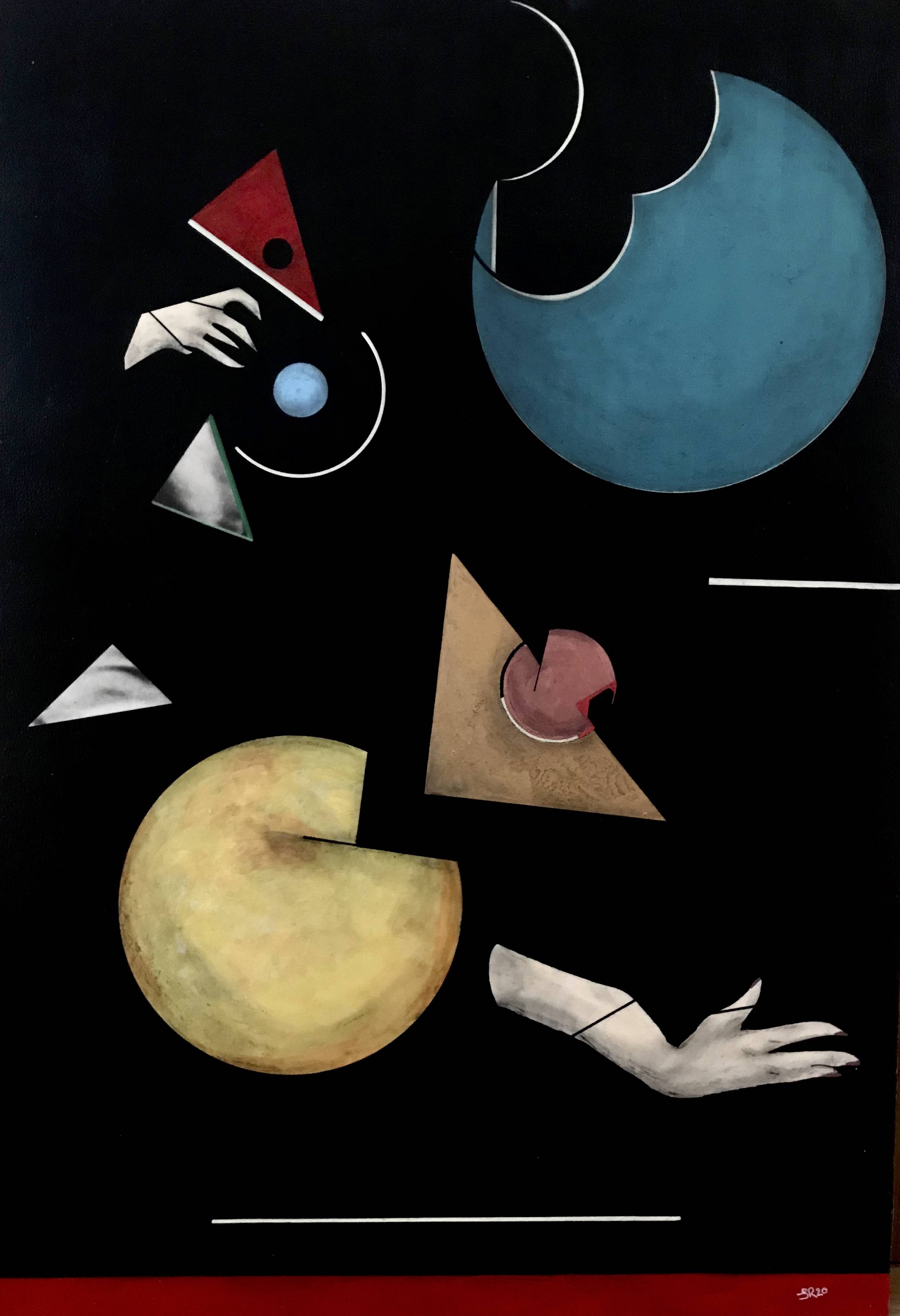 What does art offer you that music cannot? Is there any overlap between the two?

I think they feed into each other, I like to move between the two. When I run out of steam in the studio I can pick up a paint brush and take it out on the easel. I think maybe in my art I’m looking for hidden things and in music I’m hoping to release them. Both are about sharing. I really believe in the communal nature of art, you have to share it for it makes no sense, even as exorcism. If you feel like you’ve poured your anguish into a painting, I still think you need to show someone just how pissed off you were.

Music is the best medium for being human in some ways, it’s hard (but not impossible) to jack to a painting after all. The magic of people getting together and letting go is hard to beat. ‘Music expresses only the quintessence of life and its events’ as that emperor of misery Schopenhauer once put it. But it’s no surprise to see music and art making such excellent companions. The visual is an essential part of the club experience for example, even if it’s an absence of light or a flashing strobe.

There appears to be a number of themes which run through your work, abstract linear design plays an important part, why is this? Does this then differ mentally from your work which is more romantic if you will, of people and places?

I can’t help this weird duality in my work, it’s like two different artists sometimes... or three if it’s been a long week. I usually start by sketching, especially when I’m travelling to gigs, this leads to the more figurative stuff. Then I tend to tease out the patterns in those, which generates the abstract works. So the two are intimately connected, in fact they are in many ways the same pictures. This goes back to my idea that down at the microscopic level there are patterns that form the bigger picture, but that these tiny patterns have a life of their own and might at any time wander off and disrupt the bigger picture. It’s how these parts interact with each other that I find interesting. The figurative work is perhaps my first encounter with the subject, like weird unconscious spirit creatures that spiral out of my frazzled mind. Then the abstract work is my attempt to consider those fragments and try to resolve them. Hence circles and mandalas are quite prevalent in my work, fractals spinning round a central pivot. Except I’m not sure I’ll ever find a solution, but that’s the whole point. In fact that’s what makes life such an excellent adventure. 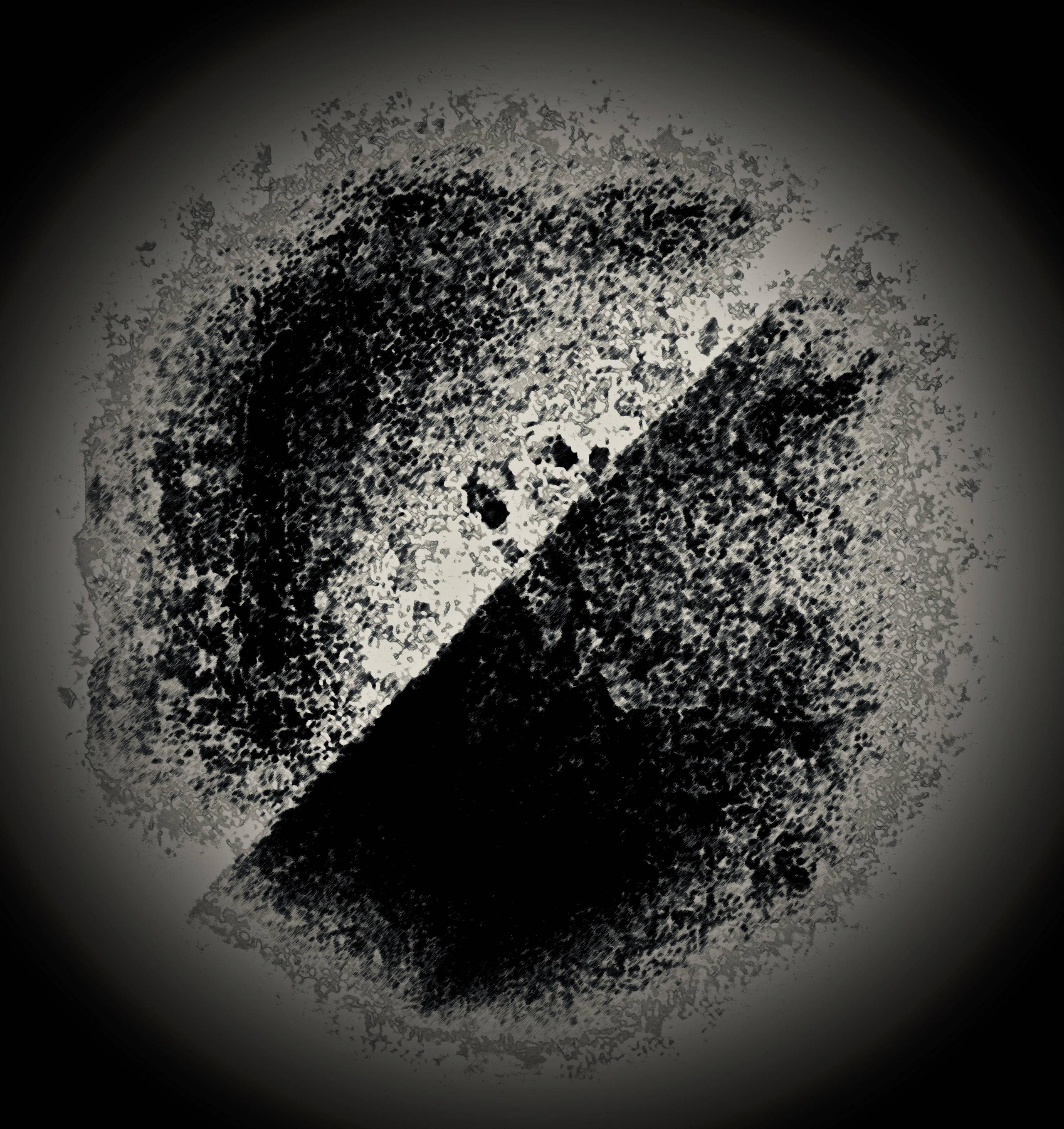 Is there a piece that you are most proud of?

I’m not sure, I try to let them go once they are done. I love seeing them up in different spaces and I’m especially interested in seeing what the people who have bought my stuff make of them or where they hang them. I got into some brilliant conversations at a recent art fair with some folk, their takes on my work and it’s meaning was far more interesting than mine! Once a collection is done to the best of my ability and hung in the most pleasing, coherent way possible, then it’s about letting it go out into the world, whilst I get back to scribbling again.

Do you find that there are limitations as an artist? What blockers stand in your way?

I’m learning all the time, so I’m constantly reassessing what I do and how I make things. I never really had any formal training, a bit like my musical career - in that sense I might have an unorthodox approach to some things. But you learn to work with what you have and embrace your limitations, while at the same time looking to expand your skills. It’s the same in the studio, even after 30 years of tinkering I’m still finding new ways of doing things. It’s important not to let frustration strangle your urge to make things. Lack of confidence is a killer and I struggle with those voices all the time but if you’ve got something to say, trying to say it is better than pushing it down. There are no guarantees anyone will listen but it’s certainly worth adding to the conversation. 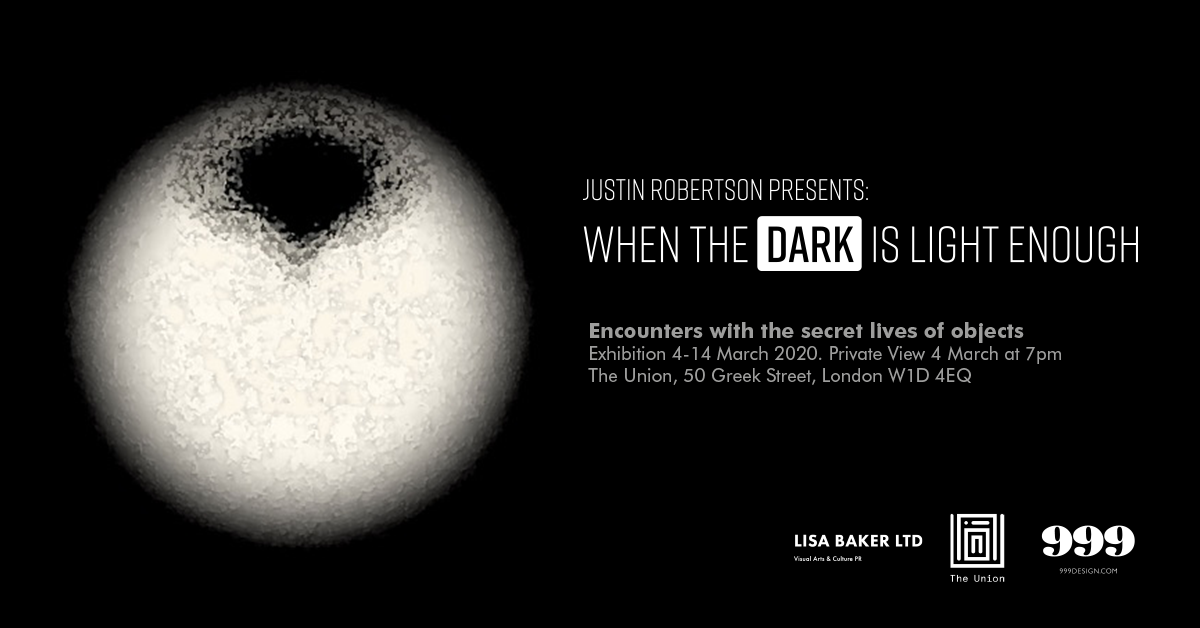 Follow Justin Robertson. Justin premieres his When The Dark Is Light Enough exhibition on 4th March at The Union - RSVP HERE.