Since the days of The Loft and Paradise Garage through to Plastic People’s legacy and forward-thinking contemporaries like De School, dance floors have been built on an ethos of inclusivity, freedom and hedonism.

In these spaces self expression is encouraged; you can truly be yourself without any judgment. The emphasis is placed on the basic principles of what a good club should be: great programming, great sound and an open and diverse crowd. These are the kind of venues that have become pillars of the underground music community in their respective cities or towns across the world.

The changing landscape of clubbing over the years has inevitably brought with it many obstacles for nightclubs. Factors like gentrification, licensing and politics creep in, making it difficult for some clubs to operate. But if we dwell on these negatives, we forget to celebrate the venues that are providing these safe havens and building special communities through the dance floor. 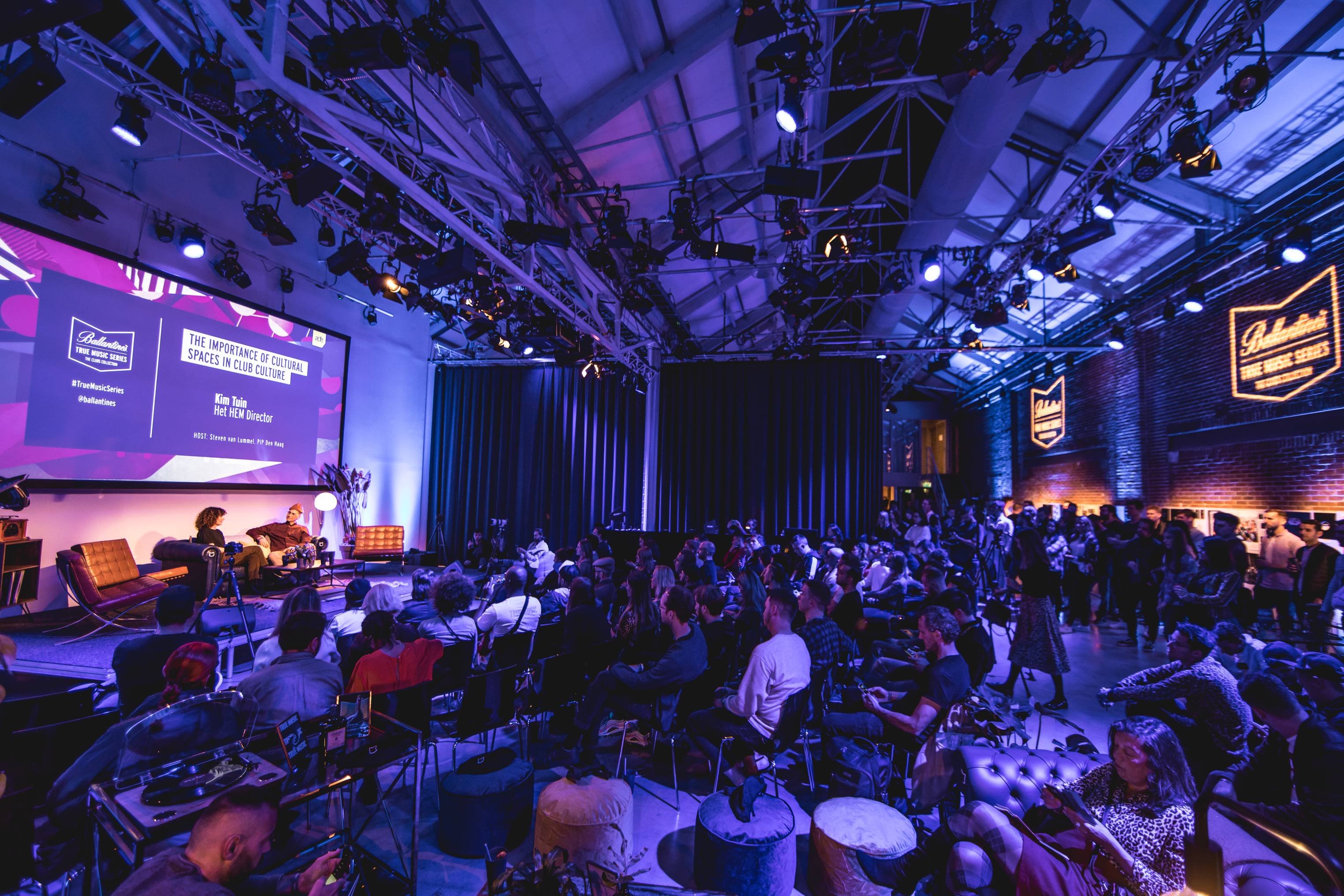 In this spirit Scotch whisky brand Ballantine’s partnered with Amsterdam Dance Event - the annual electronic music conference that takes place in the Dutch capital - to hone in on the importance of night club culture and the dance floor.

In the run up to the event, which took place on the opening night of the electronic music conference, Ballantine's crafted several True Music Series limited edition bottles using the key design features of the night clubs featured in the series. On the night, the event itself centred around the screening of a documentary made in partnership with four of the world’s most pioneering night clubs. ‘Communities behind the Dancefloor’ told the stories of The Gärten in Beirut, Nitsa x Apolo in Barcelona, Brooklyn’s now-closed techno institution Output and the world’s longest-running nightclub, Glasgow’s Sub Club. It revealed how each venue has stood the test of time and how they’ve laid the foundations for relationships to form and for communities to exist.

The second part of the evening brought together the people behind the venues in question, to pick apart and build on the themes that came out of the documentary. Delving into the history behind each club, it became apparent how unique every space’s story was and how diverse their approaches to running a nightclub were; ultimately most of these boiled down to cultural factors, gentrification and geographical location.

The latter is particularly poignant in the case of The Gärten. The 4000 cap outdoor pyramid club operates throughout the summer in downtown Beirut and has become a hotspot for international DJs. For co-founders Ali Saleh and Nemer Saliba, bringing in international names on a weekly basis to both The Gärten and its sister venue Uberhaus is an important part of putting, not just their club, but their city on the map. Since the club opened eight years ago, their mission has been to show the rest of the world that Beirut is a destination for quality nightlife; that when people come to the city they will experience something they never thought they would.

Although Beirut is a democracy, Ali notes that it’s a democracy built on Sectarianism, which still defines Beirut as a country. For both Ali and Nemer, the LGBTQ community are incredibly important. Although these communities aren’t discriminated against as much as they used to be, Nemer stresses there’s still a long way to go, but that the club continues to act as an inclusive space for everyone.

“We’re really promoting that we need to be able to be a society that’s free from all this bias. Everyone needs to be under one single roof raving together.”

There’s a real necessity for venues like The Gärten who can use their platform and their voice to help challenge people’s perceptions. Tom Elton, Head of Music at Ballantine’s, echoes this sentiment. “What these clubs are doing for these communities in creating these safe spaces for people to be included and to be themselves is so pioneering, way beyond politics or anything else.” 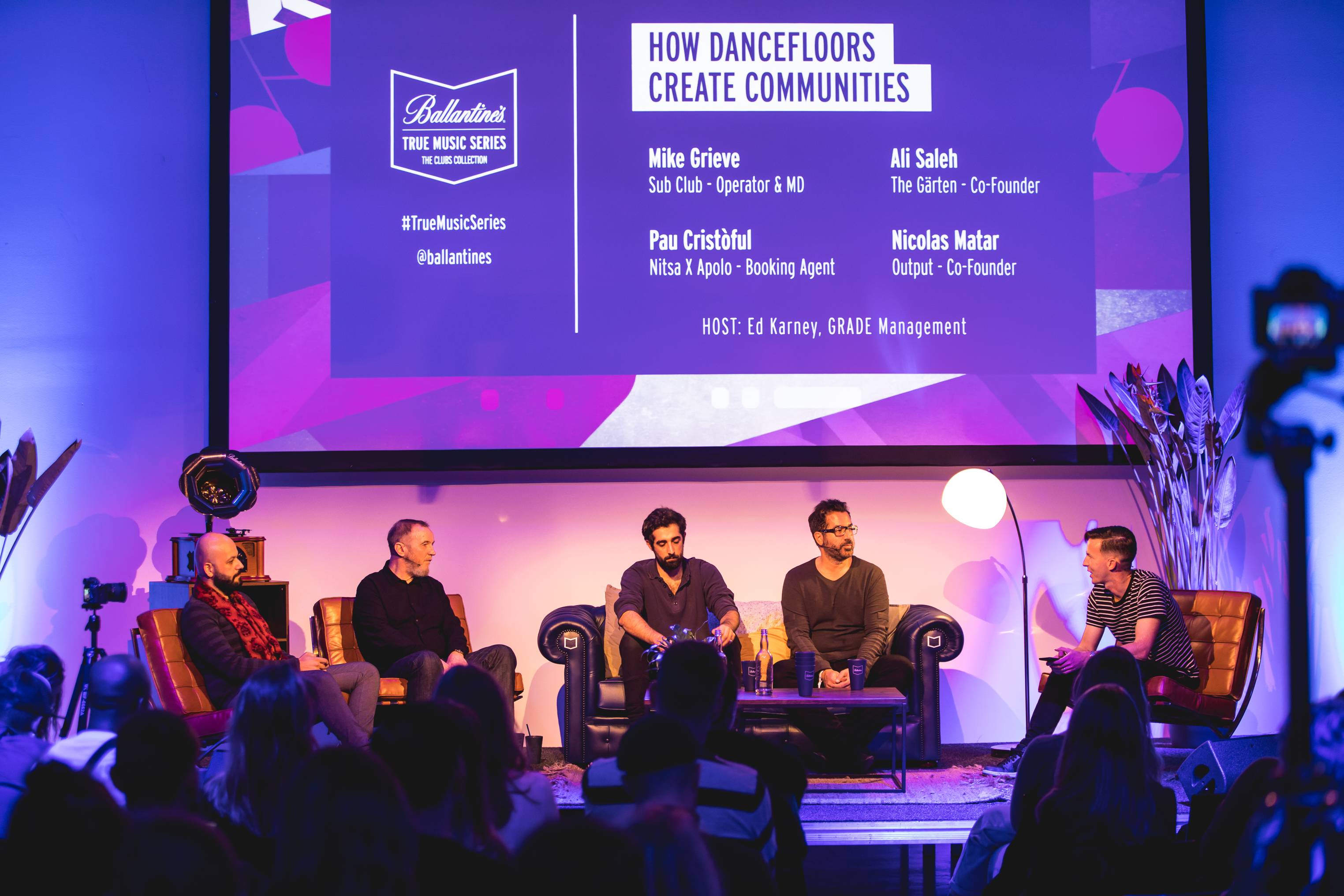 But not only are these clubs creating and supporting communities on the dancefloor, but behind the scenes too. They build the friendships that form the backbone of these nightclubs; without their energy and passion these spaces probably wouldn’t exist.

Harri & Domenic’s 25 year long residency at the Sub Club is a perfect example. This partnership is a pillar of the club itself; a way that they’ve built a trust with their crowd week in week out. But Mike admits that this formula has in a way made them engender their own competition in Glasgow.

“By definition Harri & Domenic’s residency means that other people aren’t having the opportunity to play Saturday night in the Sub Club, so people are gonna go and they’re gonna start nights elsewhere. We make competition for ourselves by actually having this longevity, by having this thing that’s going on and on.”

But Sub Club’s longevity can only really be a positive thing. It’s something that Mike puts down to integrity and staying true to your core values.

“To kind of coin a phrase, there’s a morality of music. It’s like you know when something’s right. You know when a DJ is playing music just because it’s popular. It’s honesty, it’s integrity. The musical morality to me is about being true to your own musical beliefs. Trust in your own ears. That’s fundamentally important.”

It’s this honest approach that generates the conditions for communities and relationships to form. We don’t know about you but we’ve made plenty of our closest friendships, and even work relationships, on the dance floors of nightclubs. At Subbie Mike says it happens all the time. He even met his wife on the dance floor before he worked there.

“It’s a recurring theme for us in Sub Club. People will say “Ah yeah I used to go to the Sub Club years ago. Actually I met my wife there” or “my husband there”, or “my best pal”. It’s what clubs do, they build communities, friendships.” 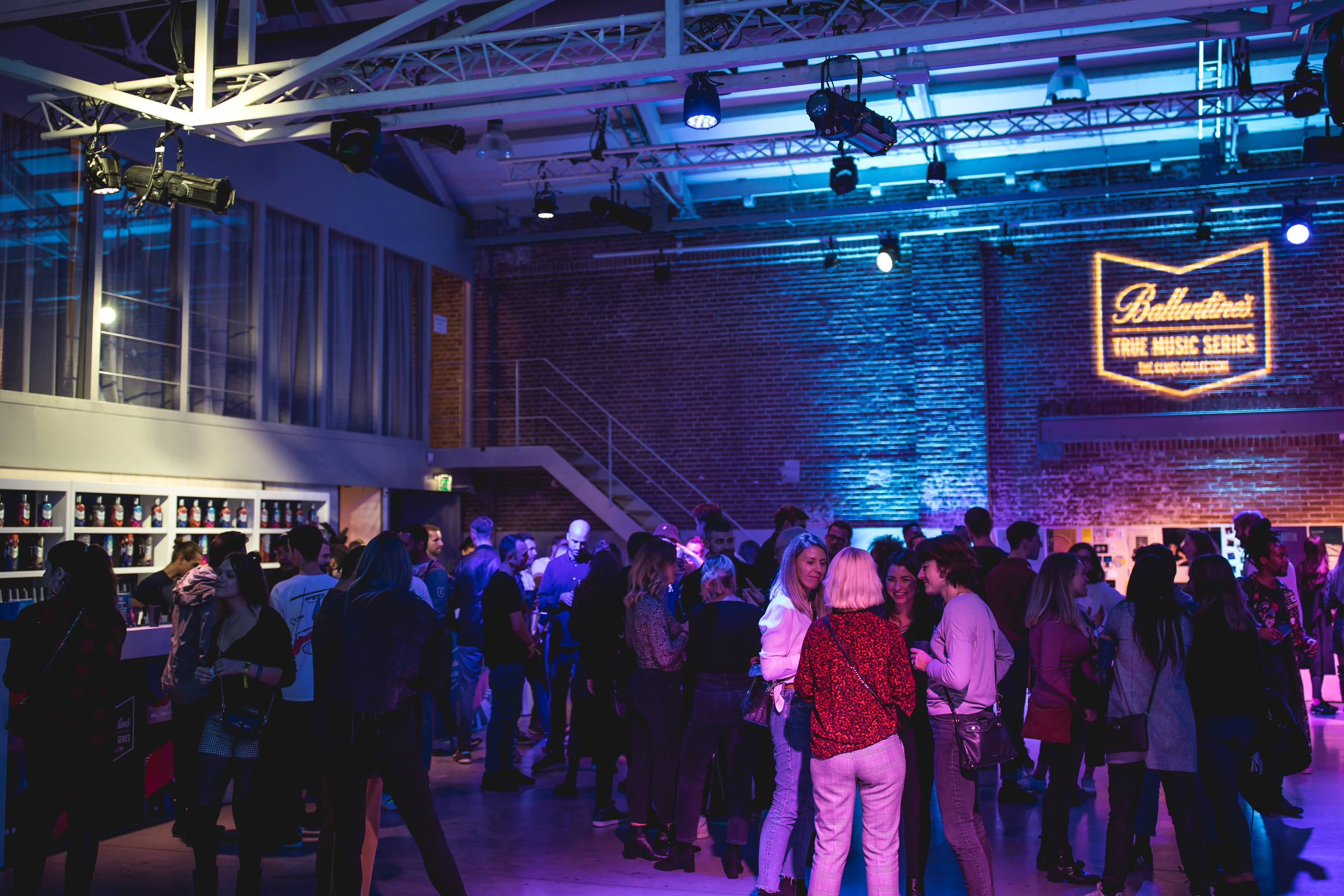 The same is also true for Barcelona institution Nitsa x Apolo. Booker Pau Cristòful, who made up part of the Ballantine’s panel discussion, makes a point in the documentary of how clubbing must go beyond just the music and come down to the experience.

“I don’t want to just programme good DJs, I want people to have a good time. You create this community feeling between everyone that is in the club and you feel connected to each other. There are people, even friends of mine, that are sometimes getting job opportunities because they meet someone on the dancefloor, but not even that, they could find the love of their lives.”

Like Pau, Nicolas Matar, the founder of Brooklyn institution Output, feeds off the satisfaction of the crowd. “When you have a successful night and you see all those happy faces on the dancefloor celebrating life, I don’t think there’s anything more rewarding.”

Nicolas sees the night club as a place where people from different walks of life can connect, “the ultimate equaliser” as he calls it. It’s true, on the dance floor everybody is on a level playing field and it’s in those situations that you can truly be yourself. The same goes for the clubs themselves and comes back to Mike’s point about integrity, even if, in the worst case scenario, that eventually leads to closure. In the case of Output, who were sadly forced to close their doors on New Year’s Day after six years, Nicolas recognised that all good things must come to an end.

“In New York that’s typically the life cycle of a club. It’s not like Glasgow, like Sub Club, where you can be open for 25 years, that’s more of an EU thing. We just don’t have that in the States.” 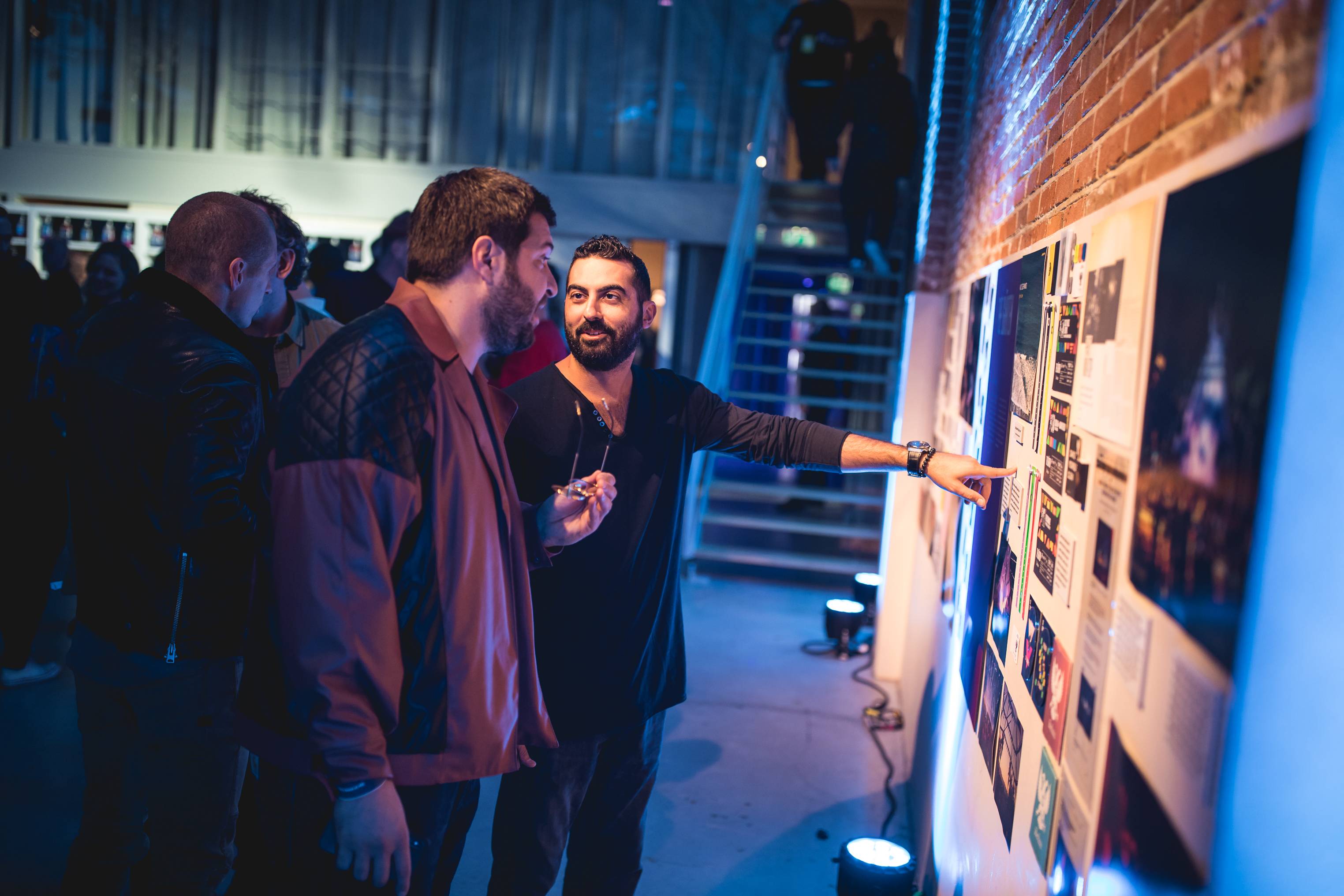 Nicolas is a realist but seems to trust in the belief that when one door closes another opens. His days running clubs definitely aren’t over yet, it’s something he says runs in his blood. Being able to facilitate that creative freedom that the dance floor engenders is, after all, why Ballantine’s have chosen to tell these nightclub’s stories in the first place.

It felt apt for these themes to come up for discussion in Amsterdam, a city ahead of the game, where nightclubs are valued and celebrated as a cultural asset. The poignant stories behind each of the clubs spotlighted in the documentary left us with food for thought. What’s clear is that there can be a cultural exchange between night clubs, communities and the cities they inhabit, but that it’s not always recognised. But perhaps the biggest takeaway was the passion and determination of the people behind each of these night clubs, and that for these institutions to continue to thrive we must support them as they do us.

Find out more about True Music. This is sponsored content by Ballantine's.