My name is Ben Rymer.  I’m a fully paid up member of the metropolitan elite.  I run a non-profit gourmet fried chicken restaurant and live on a fucking canal barge.  That’s how much  of a disconnect I now have with the ex-steel worker dads of my childhood friends, who these days pass their time by working in sandwich factories on the outskirts of Sheffield, my home town.  Last night I went to the Emirates to watch Arsenal in the Champions League and grabbed some Turkish food before the match.  That is why I love being a member of the mystical, sneering, city dwelling, elite.  I’ve made a conscious decision to embrace change, embrace other cultures, embrace delicious juicy lamp chops.  Growing up in Sheffield in the 80’s I remember the good old days of pre olive oil cuisine.  The “we want our country back” diet of potatoes and angel delight.  So I thought who better to break out of the echo chamber of kimchee chicken fried tofu and pour over tea flavoured coffee and find out just what this hollowed land of Brexit voters are eating.  What better way to gauge the likes and foibles of the modern british fat necked racist disenfranchised than to go and have dinner with him.  This is my new column, restaurant reviews by Ben Rymer of places you are too scared to eat in (or how I loved to learn the heartburn of Brexit).

There is a whole world north of the latte carrying buggies of Walthamstow which you don’t look at when you are checking house prices in a vain and delusional attempt to try and not pay your cunty landlord.  Past the north circular, up near the M25, where Essex and Hertfordshire start, that sir is where you will start to find the mythical beasts known as the Brexit voter.  Anyone who lives on a canal boat will know the hallowed land that is Ponders End (of the civilised world).  Amongst the pylons and endless concrete snaking roads, just passed the grim dogging bridge, lies the Harvester;  a vast mock Tudor pub that now serves a dazzling array of meat, with ubiquitous sides and an ‘all you can eat’ salad bar!  That, dear sir, is the sweet spot. As a spotty teenager in the mid 80’s I can still vividly recall the wonder of Pizza Hut with its salad bar, enhanced by croutons,  dressings and bacon flavoured matter. I can safely inform you that the legacy lives on in Ponders end, and I have never struggled to eat a “salad” quite as much.  How can a grated carrot taste so un-carrot like?  I suspect the carrots are shipped in from a processing plant somewhere up the road, where they 3d print sand into grated carrot shaped chippings.  The dressings also have that ‘it looks like food, my mind thinks its food, but there’s something very not food about this food’, quality.  I finished the unholy trinity by sprinkling with bacon matter. I think my mind has blocked out the result, as I have no recollection.  Oh well. It’s an eat as much as you want salad bar so obviously the evil genius owners have made sure you don’t want.  This was washed down with a cup of hot black coffee that came in a nice Lavazza mug.  That’s all I have to say about it. 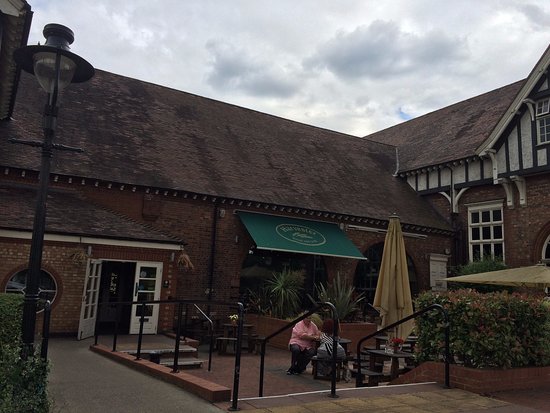 So what to order to really get to the core of the modern brexiters diet?  Well, obviously, gammon egg and chips.  Boom.  A quintessentially English affair, the upgrade on bacon and eggs can often be a superb combo of salty delicious pig, egg yolk and fat chips all on one fork.  The arrival of the food on the plate firmly hammered home that this was no reinvented metro English gastro pub with its free range meats and seasonal produce. Much like the carrots the meat looked like food, my brain thought it was food, but….

Now at this point I have a serious confession to make.  As the proprietor of an establishment whose whole ethos is ‘free range chicken is better for you, the chicken and the planet’, I have been known to willingly indulge in the dirty meat.  I will, when weak, set about a Greggs sausage roll like a starving Jack Russell.  So just to provide context the following review is in no way borne of an elitist bias. I’ll eat meat grots with the best of them.  BUT the pink slab on the plate pretty much summed up the whole Brexit debate in perfect fashion.  You’ve been conned mate, sold a dud, accepted the sleight of hand.  You aren’t getting back £350m for the NHS and the mines aren’t reopening.  You also don’t get a bargain for your 5.99 lunch special.  What you do get is a slab of pink salty matter.  I hate to say it but as I cut through the luminous pink atrocity I could almost hear the squeals emanating from the high tech animal processing prison.  This was accompanied by one of those awful limp eggs with the brown crust, a wet flaccid mushroom, likewise tomato and a small selection of rubbish chips.  Rubbish chips.  If anything has driven a stake through the heart of this country it isn’t immigrants, work automation or global capitalist elites; its rubbish chips. How dare anyone serve rubbish chips!  They aren’t hard you conning, useless muppet. They are just about the best thing in our weak contribution to world cuisine, yet you, Mr Harvester, can’t be bothered to fry a potato in the correct fashion.  No wonder Bradley in his cheap Japanese car is pissed off, if he can’t get decent chips after a long dreary day selling insurance of course he is going to vote for change.

I left most of it on the plate, found the waiter, paid and left.

There is a pub in Ponders End, it looks like a pub, my mind thinks it’s a pub, but there something very not publike about this pub.  And you know what, that’s the modern disease in a nutshell.  There is a politics infecting the world, it looks politics…..

Next month Ben visits the global banqueting all-you-can-eat mecca that is Cosmo in Croydon, because we want our country back but we still want to gorge on Chinese and Curry thanks mate!