Review: Opus 1 by Jamie Jones & Kate Simko at The Barbican

A Tuesday night where club culture meets classic culture. Who’d have thought dance music could be re-interpreted and appreciated in such a way?

Review: Opus 1 by Jamie Jones & Kate Simko at The Barbican

A Tuesday night where club culture meets classic culture. Who’d have thought dance music could be re-interpreted and appreciated in such a way?

When you hear the name Jamie Jones, you think of Ibiza, a Paradise party, Hot Creations and an instigator of the tech-house 21st century. However when fused with Chicago raised and house music evangelist, Kate Simko, who now runs the London Electronic orchestra… Well, expect something quite simply, very different indeed.

Opus 1 is Jones and Simko’s beginning of something new. The perfect yin-yang of contrary forces - male vs female, electronic vs classical, theatre vs club. This dual monism provides us with two hours worth of transcendental audiovisual experience forming a seamless whole. We can only assume its name is derived from the Op 1 synthesizer and the 1920s exponent of art and music, Walter Ruttmann, who produced the avant-garde abstract films of Opus I and II. Merging the two ideas together, they bring us this live 25-piece orchestra conducted by Robert Ames.

Held in what the Queen calls, “one of the modern wonders of the world”... Is it any wonder that this powerful duo held their debut performance in the architectural landmark and utopian inner city living centre of one of the capitals most boundary-pushing venues. The Barbican home to the futuristic complex of concrete Brutalism surrounded by luscious greenery, surrounding lakes and ultimately the central hub in which classic meets contemporary… The night was destined to be a prestigious one, inside and out.

In anticipation, we enter the Barbican hall in awe of all its grandeur and incredible surrounding acoustics. Looking out, rows and tiers of fans cascade amidst rows of seats, many familiar faces from across the music industry, all here to support.

After many chants, Jones shouts in gratitude, “There’s clearly a lot of people who love music here but without further ado, let the show go oooooon.”, the lights fell amongst the crowd, yellow beams move over us like tiny dancing suns. The entrancing London Contemporary Orchestra commence their strings from violins to cellists, they open in cinematic fashion. With Jones locked right stage on synths, Simko on keys next to him and the harp placed angelically behind them. To the left is a grande-piano and behind all is a glimmering gold gong; each having their own moment in the light. 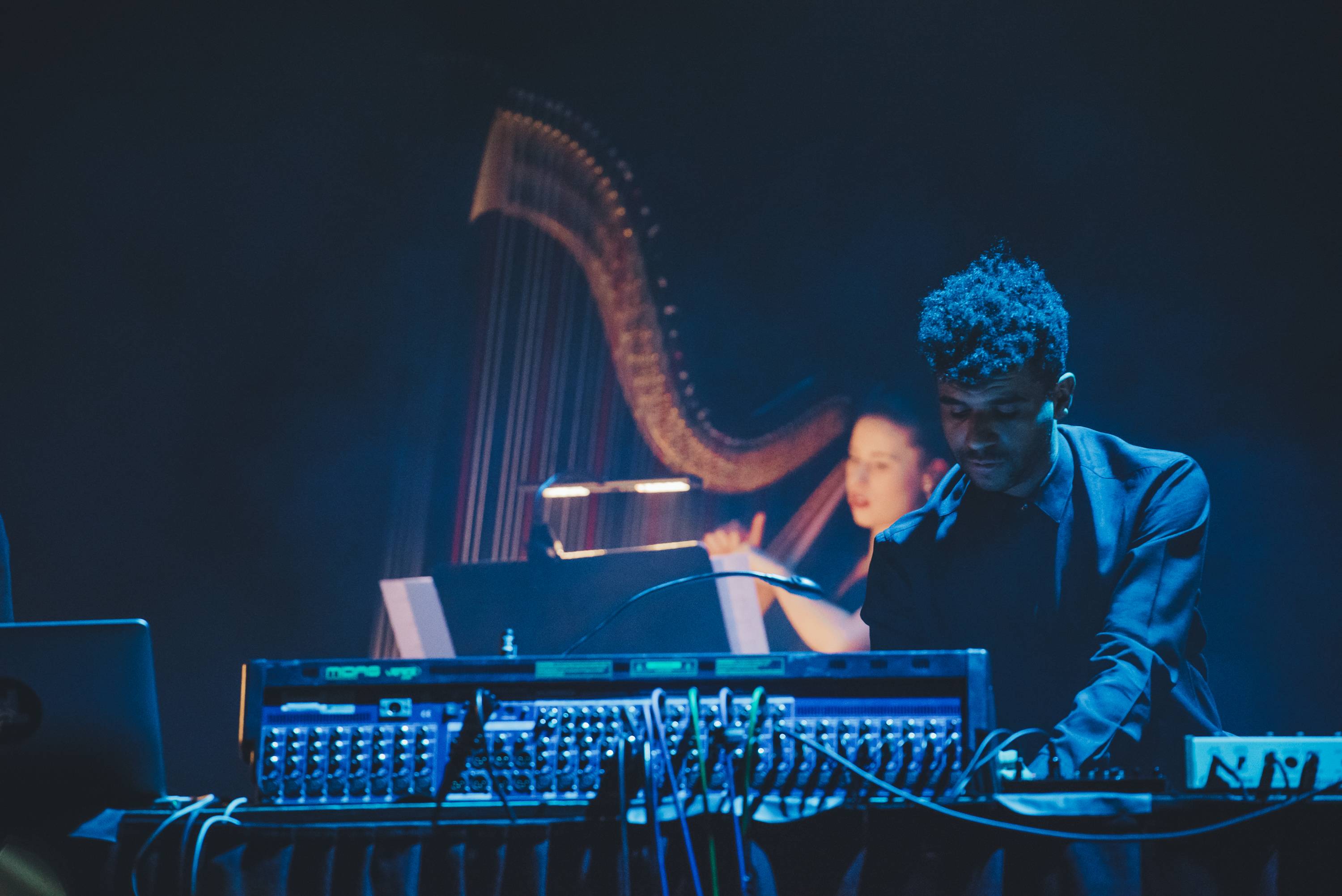 A theatrical entrance from the sounds of the orchestra with undercurrents of wispy jacking synths from Jones of the pads, kept us in suspense. Whilst a recurrent flow of the plucked strings on the harp tends to our souls, we wondered when the moving bassline might drop... With that we are straight into the 2009 hit of Jones, ‘Summertime’ turning an awe-inspired crowd into an animated one. Other remixes accompanied it, such as a bouncy and rhythmic ‘Ruckus’, each one of Jones tracks elevated a new dimension synthesized with all elements on stage. Our view transformed of what’s primarily thought of as club music, we felt and saw his classic and distinct deep cutting basslines with his sharp hi-hats in a completely different light. Evoking a simply hypnotic and amplifying performance - at utmost a sophisticated and collected rave.

The double act contrasted the more racey tracks by throwing it back to their collaborations beginning in 2015, where they produced more ethereal tracks such as the kaleidoscopic sound of ‘One Time Game ft. Jem Cooke’. The live singer helped remind us that we aren’t in a club but a theatrical space.We were pulled back into our seats, encouraged to honour the spectacle of a genre defying performance.

As we crescendo towards the end, they keep us curiously guessing what could be next... The notorious ‘Hungry For The Power’ orchestrally recomposed is fired out and the crowd goes wild. The energy when this was in full swing was purely fathomless alongside the enthralling light display rhythmically moving over us in all four directions. With eyes closed it felt even more liberating to the senses.

They leave us hanging as they disappear from the stage before swiftly returning with Hot Natured’s ‘Benediction’, by this point everybody was moving before reaching a climactic conclusion and ovation. The smile on Jones face in the last moment said it all.

One word that comes to mind throughout the performance was ‘respect’... A Tuesday night where club culture meets classic culture. Who’d have thought dance music could be re-interpreted and appreciated in such a way? This is how to move things forward and I speak on behalf of the many cultures, ages and the sweet 70 year old man next to me when I say that we look forward to moving forward with you.