Onwards and upwards regardless? You bloody bet.

Onwards and upwards regardless? You bloody bet.

The clouds rolled in overhead and great billows of dust and sand blew past the old factory upon the mighty breeze. Meanwhile the drums continued to bang and the dancers remained unphased, darkness had fallen and the night had only just begun...

Our love affair with Lyon continued this week past as we touched down in the riverside town for the sixteenth edition of Nuits Sonores, the enigmatic arts, culture and music festival which has evolved from strength to strength since day one. It's remarkable to observe how far the festival has come, from early roots and a simple concept to a full seven day event and conference series set across citywide venues. It's fair to say that they truly have built a unique vision with a party atmosphere to match.

This was to be the first time that the festival would span a full week - being blessed with a French public holiday on both the Tuesday and Thursday - no small feat. How do you programme a significantly diverse spectrum of music across that length of time? Would interest wither throughout? Was the city big enough to support the versatility of the line up? Would there be empty dancefloors? These were all questions which the organisers will have asked themselves prior to last week but in reality they had little to worry about. It sold out. Entirely.

By day the festival was held at La Sucrière, a recognisable venue which has become known for its contribution to contemporary art and culture within the city. An ex sugar factory, it sits proudly aside the river Saône in the up and coming, hypermodern Confluence: an area of the city which has grown from a seedy industrial outland to a futuristic metropolis in recent times - equipped with trendy hotels, canalside bars and green spaces.  It was here that we were treated to some of the most engaging performances of the week and observed the very best in cutting edge electronic music and expert curation by the likes of Paula Temple, Daniel Avery, Jennifer Cardini and Four Tet.

Split between three areas the factory could be described as the perfect locaction for a festival of this scale. Inside the main hall, subtle lighting overhung the main booth, shimmering flickers bounced between the shadows whilst the natural light from outside poured in through high windows and open doors. Centred in the middle of the vast room was the booth which played host to the likes of Pearson Sound, Josey Rebelle, Helena Hauff, Four Tet, DJ Nobu, Maceo Plex and many more.

Those who channeled the aesthetic of the space most effectively were Pearson Sound and Josey Rebelle who playfully weaved between abstract electronics and big room cuts which sent the dancing crowd into overdrive. This was a daytime party after all, it required a charsimatic touch and a sense of appreciation for the atmosphere of the wider space. Pearson Sound cut swiftly between garage and bass, blending classic vocal medleys with hasty two step floorfillers whilst Josey Rebelle opted for a uniquely disctinctive blend of classic hardcore and techno concluding her set with the euphoric "Head In The Clouds" by Manix which was met with a rapturous roar.

Other highlights came in the form of the fast paced techno and electro delivered by Helena Hauff as the day met night. A lone figure in the booth she expertly conducted each dancer with fast paced percussion, swift transitions and the otherworldly glitches of a genre which is experiencing a welcome revival of sorts at present. Jennifer Cardini's Tuesday takeover meanwhile felt like a 'homecoming' of sorts, judging from the crowd reaction.

The upper floor of the factory is perhaps best known as Le Sucre and is one of the most influential clubs in the city at present and the only element of the building which remains open all year round for the presentation of electronic music and nightlife. It was here that the slightly more intimate were profiled by day with the likes of Dopplereffekt, D.A.F, Tropic Of Cancer, Karen Gwyer, Pan Daijing and James Holden all appearing. However, perhaps one of the most exciting performances came in the form of Scottish rising star Lanark Artefax.

The room melted into a deep hush as he took to the darkened booth, only the faint sporadic flicker of LED lights illuminated him throughout the course of his hour long performance. A rectangular screen took centre stage and presented futuristic visuals in line with his bizarre blend of cut up electronics and distorted soundscapes. Some left, they knew little. Others stayed and were enlightened by the depth and breadth of his set which embodied more of a cinematic experience than that of a club performance. It was a tour de force which demonstrated his promise as an artist in a new era of futuristic music, the highlight coming in the form of his reimagined version of "Touch Absence". Others who deserve props for their shows in this perfectly tuned square roomnclude the ever impressive Dopplereffekt.

Walking down the metallic frame of the building and meandering between the winding staircases the view is quite stunning. Once inside it can be easy to forget that the setting of this building is rather remarkable. Outside, a large courtyard sits beneath the shadow of towering funnels as dancers sway and move afore a small stage. 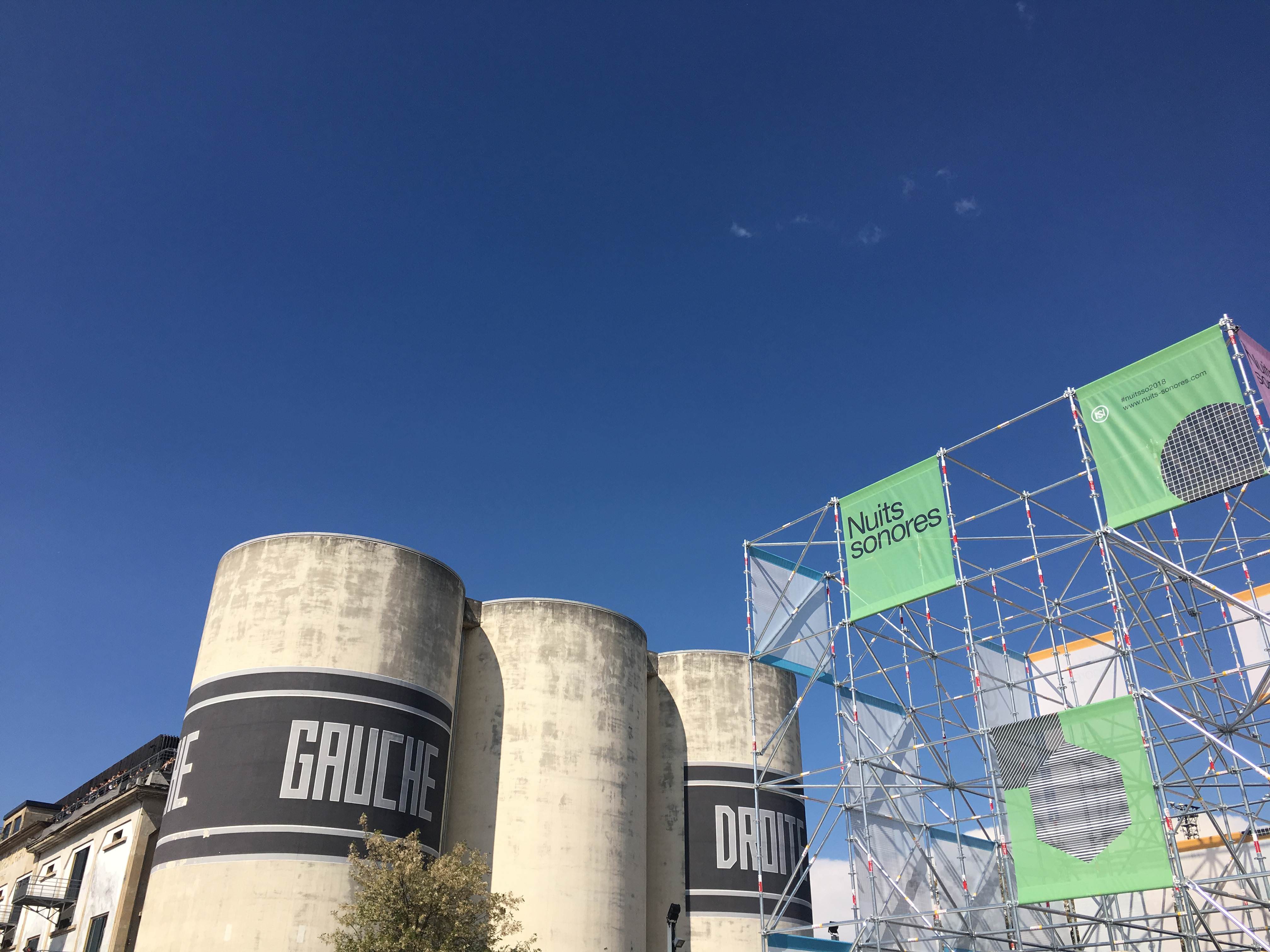 It was here that the likes of DJ Stingray, Objekt, Call Super, Lena Willikens, Dr Rubinstein, Floating Points, Mafalda, Skatebard and I:cube dazzled beneath the hazy skies of France. Some saw the sun, others were drawn into moody dense clouds, both were equally fitting depending on the tone: their backdrop built up of elegant hillside villas, the winding river and an occasional passing boat.

Highlights came in the form of Floating Points who unfurled a spectacular array of disco and house upon the hottest day of the week. A frenzied crowd paid homage to his excellent selections and demonstrated a flamboyant display of appreciation to a man who has loved the festival for many years. Brass Construction's "Got Myself Together" was quite the treat amidst such circumstances.

The festival should also be commended on its programming - witnessing the transition between the sets of Lena Willikens, Dr Rubinstein and Objekt alongside Call Super allowed for a whirlwind display by some of the most intriguing selectors on the circuit at present. Lena played faster than usual opting for rough and ready acid cuts, all with a notoriously cool edge with which she has become keenly associated. She was followed by a slightly more progressive set than anticipated by Dr Rubinstein, of whom it was interesting to observe playing in an outdoor environment far removed from the dense darkness of Berghain and about blank. The standout track however came from Objekt and Call Super who closed their set bouncing between tastes and styles... Vitalic's "La Rock 01" sounds just as good in the present as it first did upon release. Little else needs said.

The Esplanade was an incredibly easy place to spend time, there are few festivals set amidst such a unique environment. Even under the harsh clouds of a thunderstorm it offered a degree of elasticity and delight. DJ Stingray played right into the arms of the thunderous skies, as if pre empting the dense rainfall which was to follow that evening. He worked his way through a powerful array of electro and techno, his mysterious balaclava concealing his face at all times, a dark shadow against beams of light as the sky turned black. There is little else like the euphoria associated when someone like DJ Stingray plays "The Final Frontier" by Underground Resistance - the heads rolled and the sand billowed beneath moving feet. The night ended and the heavens descended, thick dust blew across the festival and Dj Stingray vanished. A magician does not reveal his secrets....

He must get hot in that balaclava though, especially now it's festival season. Just hope he's brought replacements. 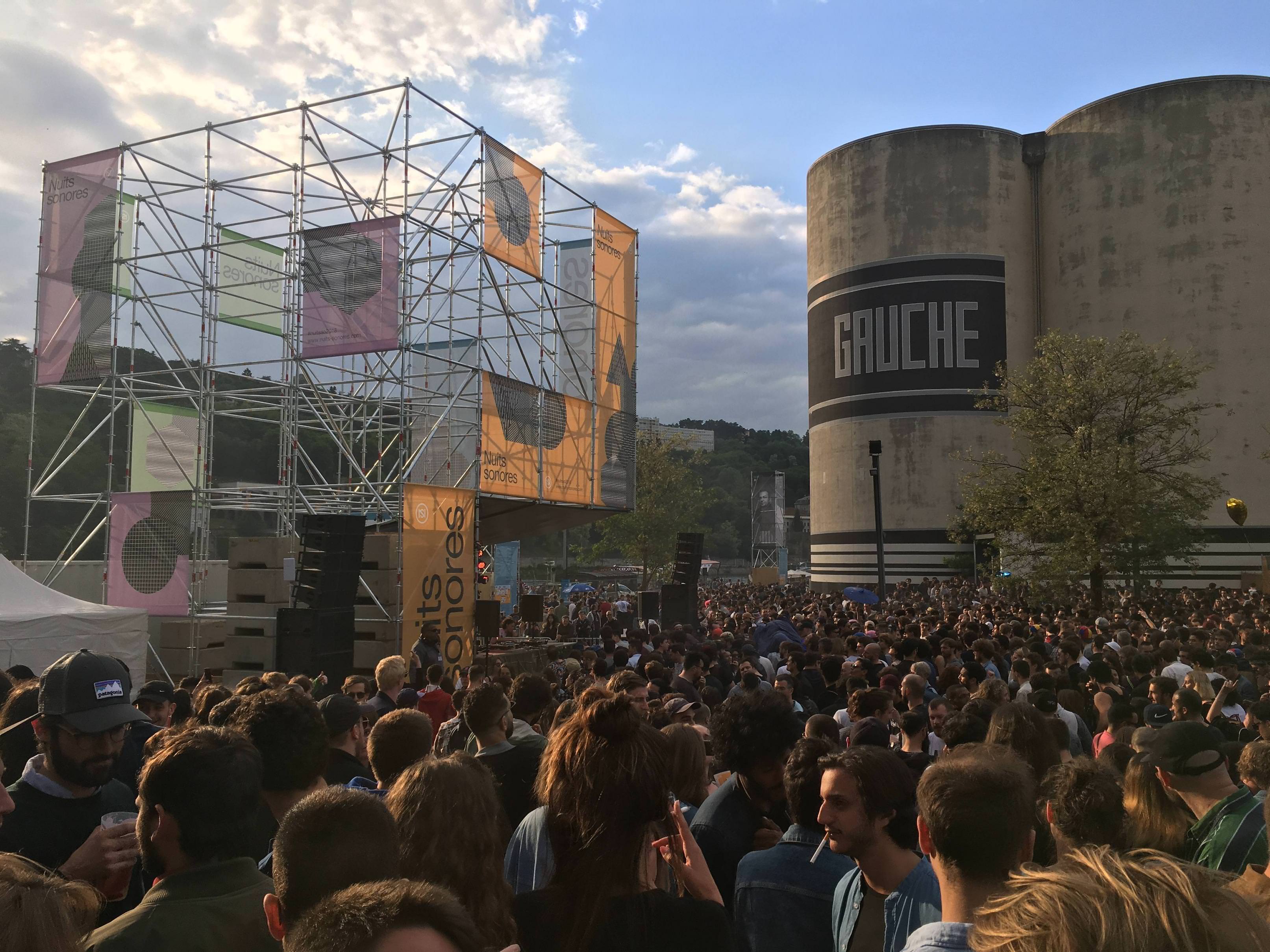 Lyon is an intricate blend of old meets new, both in the sense of its architecture but also in the city's approach to culture. Old meets new, modernism is embraced and sits proudly alongside legacy. Whizzing between venues under the cloak of darkness the city is reminiscent of Berlin, especially as we enter the industrial suburbs.

The night venue has evolved, mutated and travelled through various parts of the city, at present it resides in the Fagor-Brandt factories. A navigable, interlinking maze of old warehouses which feel somewhat friendlier and more inviting than most enormo-rave venues we've been to. They appear untouched, rugged and industrial. It all feels remarkably unforced and natural.

Our Bawrut opens proceedings and weaves through genre after mind bending genre. It's probably unfair for us to review our own but let's just say he was great and he played Lossy's remix of 'Three Sounds' shall we? Cool, done.

Inside the main hall Larry Heard was dazzling. He was joined atop a towering lighting rig, a dancing silhouette seen moving back and forth alongside Robert Owens. They say that old school is the best, it's tough to dispute under the command of such brilliance.

Meanwhile Bicep's stadium filling show has become a joy to behold. Their ascendacy has felt both natural and deserved in every sense. That evening felt like a celebration of just how far they've come as the entirety of the evening crowd desecended upon the main hall. Now in the uber league of 'credible electronic super acts' (™ R$N) they weave through highights from the album and beyond, ending on a euphoric closer in the form of 'Glue'.

Whilst the main night time venue throbs elsewhere there's a whole network of parties taking place across the city's myriad clubs and venues.  This is also true for the daytime where the 'Nuits Sonores Extra' activities can mean you stumble upon a quiet corner before being greeted by a swell of people at an inpromptu street party - of note was La Monde's pool party.

La Marche Gare witnessed a performance from Les Filles de Illighadad who played a unique blend of North African psychedelic rock. Malka Tuti's night at Le Periscope hosted J.A.K.A.M. & The Ritual Forces - a band whose members only met the day before and had only practiced for 5 hours previously. It's hard to believe given the cohesive nature of the performance. Improvisation? Just a tad.

Transbordeur filled for Vox Low's live show in the main hall whilst Guadalarjara's Leonor held the fort next door in superb fashion. This particular night concluded back at what feels like the anchor to all that occurs across the week; Le Sucre where Marvin & Guy's Life of Marvin is at a peak playing back to back with esteemed collector DJ Tennis.

Nuits Sonores is a mirage of electronic music in the truest sense. Set amidst the beautiful backdrop of a city celebrating a golden moment it was a wholeheartedly special edition.

How can it improve? Impossible to say. Onwards and upwards regardless? You bloody bet.