Upon entering the Union Chapel on a humid night in May there’s the familiar old church scent of worn, creak-heavy wood, motes of dust and the burning of white wax filling the air. Candles are lit at the altar, along the front of the stage as well as over the arches and between the pillars of the chapel’s central interior. It’s a nice touch that accentuates the intimacy of the setting and one that induces observance once the night’s music begins.

Intermittently backlit by a flood of blood-red lighting and accompanied by wafts of smoke that trail across the stage during his forty-minute performance, tonight’s opening act, veteran guitarist and composer Christian Fennesz, does a consummate job of commanding such a backdrop. For a figure whose output has remained in a state of fluid evolution throughout his career there’s a fitting mutability generated during his set; an engaging movement between dissonance and melancholy, magnitude and transience.

Passages of profoundly delayed guitar and seismic detonations of bass and distortion arrive as cathartic agitations, trading space with aqueous, droning soundscapes that imbue the set’s heavier immensities with light and soul. In a few instances Fennesz lets a few elements swirl around each other while at others he lets one spare guitar chord do all the work, demonstrating a sleight of hand that extracts profuse emotiveness from concise minimalism. At certain points his efforts evoke ‘It’s Hard For Me To Say I’m Sorry’, a recent outing with Jim O’Rourke that cut gleams of radiance with fracture and eruption. At others his appearance recalls the haunting and heartfelt downpours of ‘Edition 1’, another collaborative record conceived in the last few years, this time with King Midas Sound. 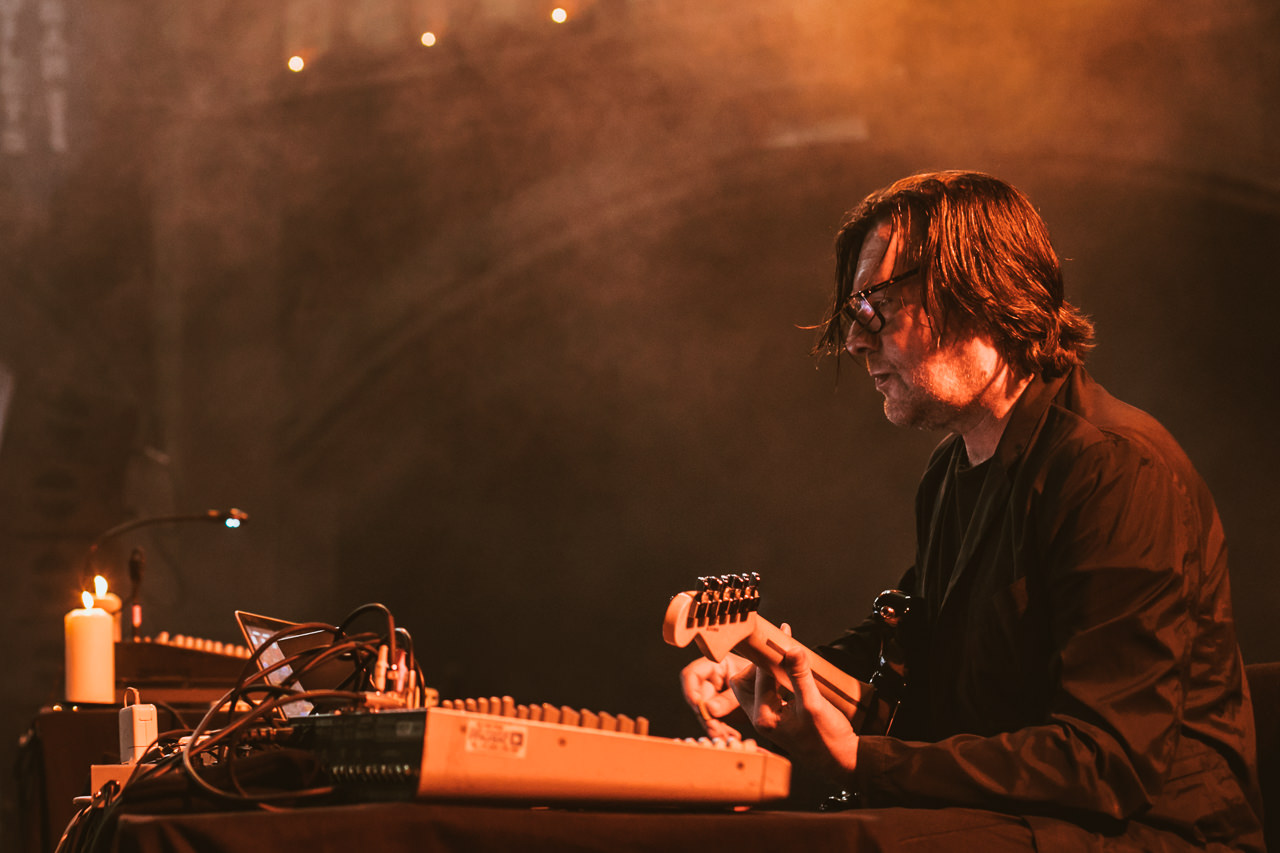 Although his performance is certainly invested with a sense of liquidity and flux, the balance between the glitch-ridden frictions of his earlier years and the sumptuous, electrified ache of his more recent output is tipped towards the latter. A clear highlight is ‘Tom’, a recently reissued track that, in its plaintive and euphonic flourish, represents a dramatic high point, one that encapsulates the meditative romanticism that Fennesz favours here. If there’s a criticism to be made it’s that on this occasion Fennesz conveys this in isolated moments as opposed to maintaining a mesmerism that remains constant throughout. There are certainly impressive peaks but there are less captivating recesses too. Nevertheless, despite the periodic complexion of his performance, Fennesz creates an elemental and florid magic that lingers. 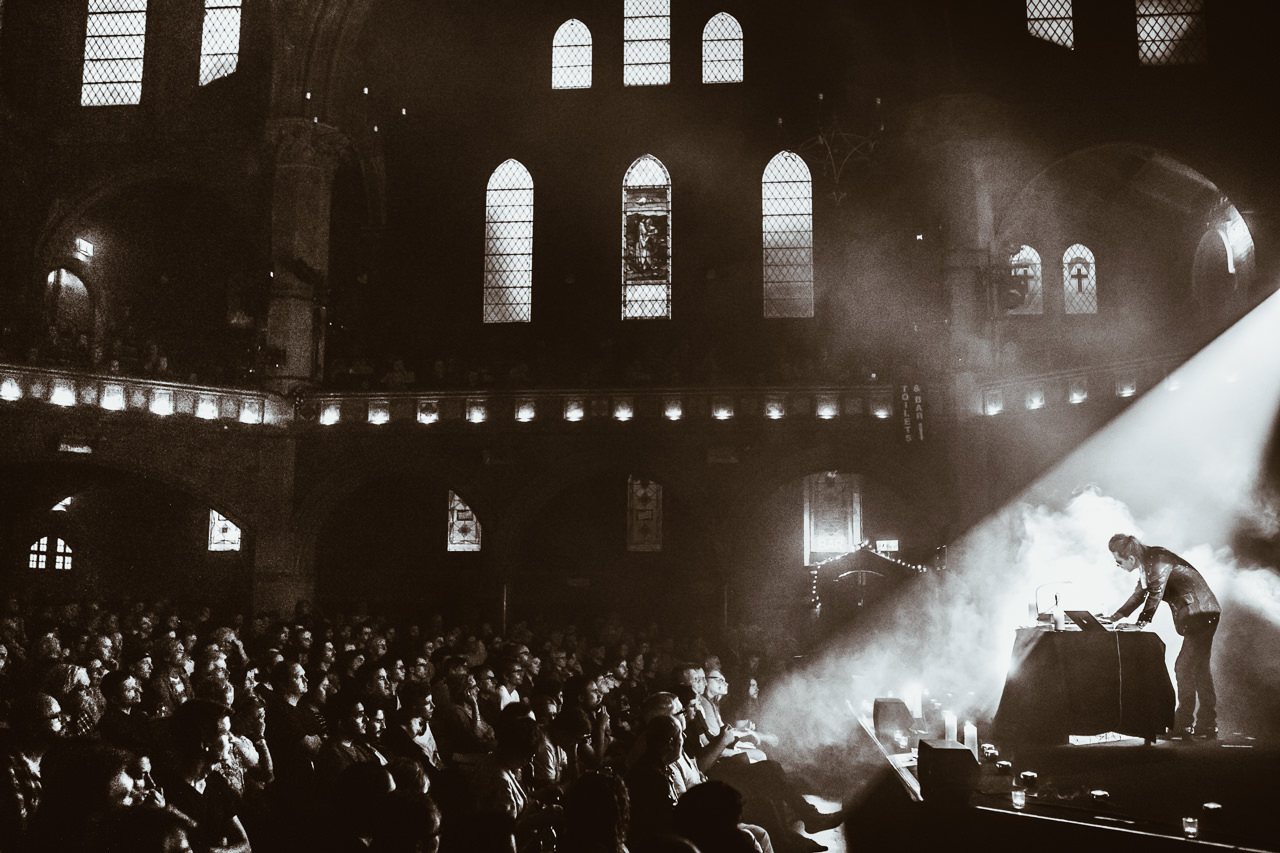 Conversely, the artist that follows him and tonight’s headliner William Basinski, articulates and preserves a special atmosphere for the duration of his premiere performance of ‘On Time Out of Time’, a new work comprised of two longform pieces that, in their respective voyages of tenderness and expanse, find beauty in the void.

Magnificently attired in glitter and sporting his trademark reflective aviators Basinski irreverently introduces the work as a love story between ‘two fucking black holes’, inspired by a rift in time and space that happened billions of years ago. If on first impression that sounds ambitious and grandiose then the next three quarters of an hour testify to Basinski’s faculty for envisioning the infinite. 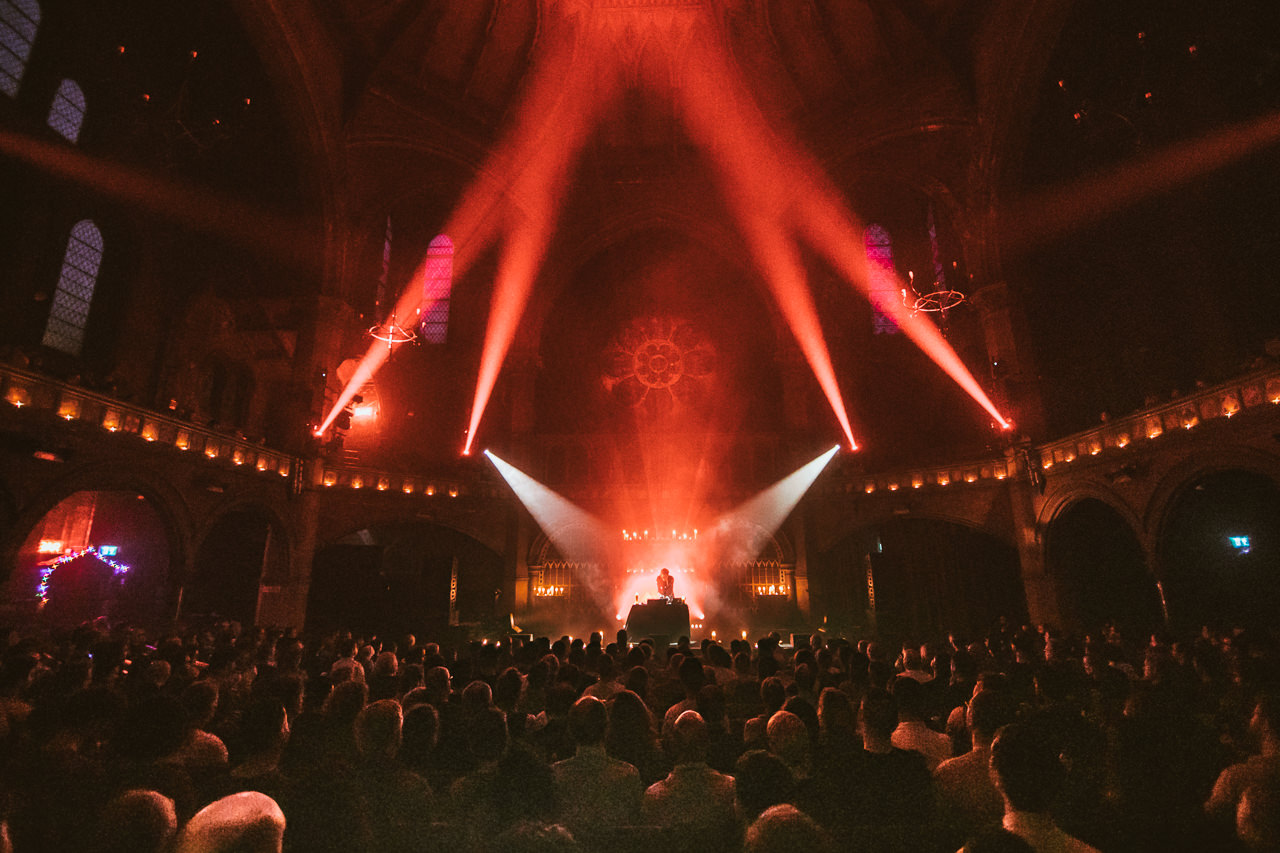 With the lights cast lower, candelight continuing to shimmer and darkness creeping in outside the church takes on a more hushed aspect as Basinski begins. The first half is a serene launch into a state of heightened suspension, as if a Vangelis soundtrack were caught in a time loop. The second ripples with celestial unease. Throughout he magnifies a passage, staying locked in a repetition that changes, almost imperceptibly and without conscious interference, over time. As with renowned works like The Disintegration Loops and Watermusic II the effect is spellbinding. Similarly to the former, the signal of Basinski’s transmission seems to deteriorate over the course of each piece whilst somehow becoming ever more pitched towards transcendence. It suggests a stunning alternative to the music collected on Carl Sagan’s Voyager Space Probe; something both existential and affecting. The quality of his achievement becomes more pronounced once the lights come up as it becomes obvious just how transportive ‘On Time Out of Time’ has proven.

It follows that phenomena and spacetime have become a source of fascination for Basinski. His father worked on the Lunar module and 2017’s ‘For David Robert Jones’ (from ‘A Shadow In Time’) memorialized David Bowie, another artist who often located inspiration in the extra-terrestrial. In that work Basinski mirrored Bowie’s alien fascinations and characteristics by taking ghosts of saxophone loops redolent of his music into a vaporous euphoria that sounded as if it were being broadcast from some distant, dazzling atmosphere.

With this evening’s airing of ‘On Time Out of Time’ Basinski extends his stay in those firmaments and continues to contemplate the themes that have shaped his work for decades. Time, space, death, the universe, everything are all arguably in there. What remains remarkable about his work is that even when such daunting preoccupations are confronted, Basinski still manages to take a rapt audience with him.