Walking onto a grassy knoll inside Arcadia’s sprawling pitch was a dazzling sight. Not only was the May Bank Holiday sunshine gleaming overhead, but it was there that hundreds of festival-goers could be spotted. Old hippies a-strewn with New Age headbands, teenage ravers with neon-dyed hair, young girls in skimpy geometric catsuits and yes, even regular families were dispersed across the field. This was a demonstration in diversity that few events could boast but was all in-keeping with Arcadia’s mission of uniting the masses. A fusion of smells permeated the air; something Asian, something meaty grilling in the distance and of course the drink stalls flanking the parameter ensuring no thirst would be unquenched this weekend.

The festival listed the Reactor, the Bug and the Metamorphosis show as its big attractions amongst the highly anticipated line-up that included Left Field, Sven Vath and kicking off Saturday’s programme Norman Jay. The veteran funk and house DJ was already rousing people to their feet, and soon after hands were climbing for the sky and swaying in a way that only Norman’s magic could lure us to do. Festival season was underway with Arcadia’s 10 year anniversary well and truly starting its celebrations.

Over at the Reactor – which the organisers described as a fully immersive experience in the middle of the day – crowds entered the secrecy of the stewarded tent. Inside darkness enveloped all who visited with only the strange smell of incense reassuring us that everything was just so. Suddenly green light dived off the stage and covered everyone momentarily as if baptising them in its glory. Looking up at the source, a DJ booth was mounted in the middle, surrounded now on all sides by lasers zapping, somersaulting and exploding into a mesmerising light show. This provided sporadic illumination in the otherwise murky enclosure. Although manoeuvring through the 360 degree stage was difficult in the gloom, the experience was satisfyingly dizzy with lasers cutting through the shadows like an intergalactic shoot-out. 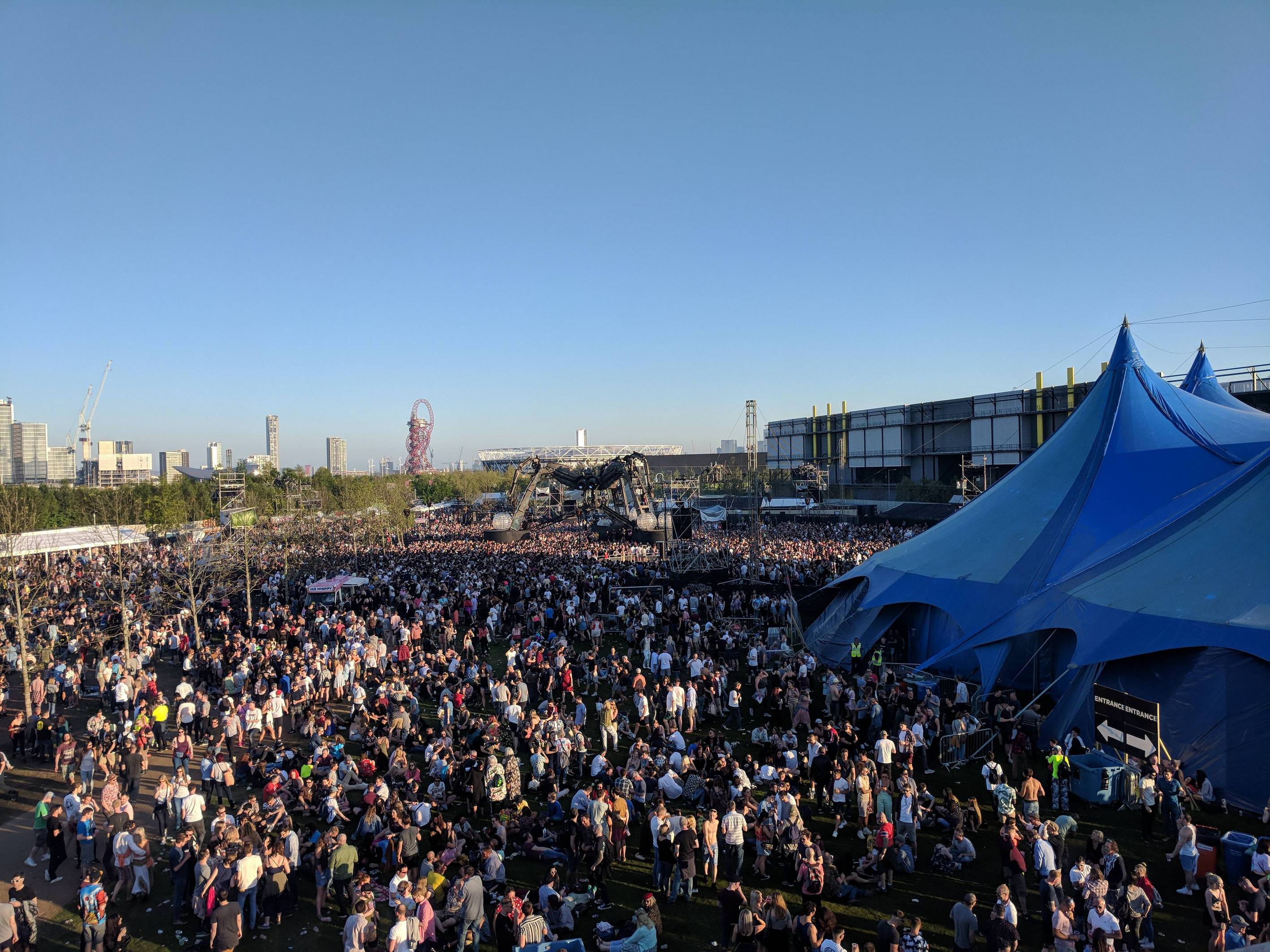 The Bug, as the name suggests, turned out to be a beetle-shaped stage with metallic wings spread open revealing a platform where performers and DJs could spin their decks. Paul Johnson’s set fired off House tracks into the ether for an hour, his sound system competing with the noise of the gigantic Spider stage nearby. The hordes were a mixed crowd with young and old being drawn into the haze of the Bug.

As the evening approached, the Bug and the Reactor powered down to drive everyone to the famous Spider. Arcadia’s 360 degree stage circled the arachnoid and it wasn’t until you were at its feet that the sheer scale of the thing could be appreciated. Perhaps this was the moment when you might hopelessly guess at how many man-hours were laboured to bring it from inception to reality but your thoughts would be interrupted. For as the sun descended, the time arrived for the Yallor Keeninyara set. Silence settled as a tribesman’s voice spoke over London before a jolt of music kicked off the performance. On all sides of the Spider, lights and colour thrilled the audience and startled most as plumes of huge flames billowed out of the spider’s head marking the show’s climax.

Sven Vath followed, chasing down the sunset as Arcadia entered its evening phase. The atmosphere rippled with anticipation at the famous Metamorphosis performance hailed as the festival’s showstopper. When the time came, the show did not disappoint. Morph-suited figures waved spectres as lightning struck them, tendrils slipped down and “abducted” people from the audience, mechanical bugs scuttled back and forth from the Spider and, finally from hardened cocoons dancers emerged highlighting the theme of metamorphosis. The show ended to hundreds of claps and cheers; Arcadia’s finale was indeed electrifying and in the true spirit of the festival demonstrated how impressive recycled materials, biofuel and a little dash of imagination could truly be.

Reflecting back on the festival and its colourful menagerie of characters (human and insect alike) it is easy to see why it has blazed a trail for ten years. However the real meaning of Arcadia was apparent in those little spaces between the Bug, the Reactor and the Spider. Those spaces where people were just being themselves, relaxed, enjoying their surroundings and sharing in this unique experience. Although the event was well-guarded by security and stewards the vibe stayed peaceful and even by sunset surprisingly there was no shoving or lairiness. The diversity in age, nationality and background of the attendees proved just how far-reaching the Spider’s web extends. Whether you’re into the music or the pageantry, if Arcadia wanted to achieve just one thing - that of uniting the masses – then you can say that for a weekend we were all part of its world-wide web.