A shaft of light in a darkened room illuminates a lone table. Upon the table lies what appears to be a dying robot. Flat on its back, stomach sliced open, the android’s innards spill out like spools of wire spaghetti. Then, from the left a lady enters the room. Silently she approaches the table, the sequins of her top sparkling as she moves through the spotlight. She gets close to the robot and pauses for a moment, smiles and takes a bow. Does she not grasp the gravity of the situation? Can she not see that this robot is ill? The lady looks up, laughs and waves to the crowd. What the hell are they doing there? The laugh is reciprocated, they warmly applaud. Does no one understand that this is a very sick robot? Can no one see that its cybernetic life is on the line? As the tasteless applause dies away the lady walks over to the ailing cyborg and pauses for a moment. Then slowly, tenderly, she lays her hands upon it and it begins to sigh. Ah, ok. She is a healer. Maybe the robot will pull through. The sigh is faint at first, like the analogue wash of a distant sea, but then it rises to fill the auditorium (I may have neglected to mention that the room is actually quite big). Then the robot begins to sing.

If you suddenly woke from a deep coma sat in the Barbican auditorium (why have your healthcare workers left you there?) then the entrance to the stage of Suzanne Ciani would pose a strange spectacle indeed. A small figure on a large stage stood behind her Buchla modular synthesizer, the overall effect is part way between cybernetic surgeon and concert pianist. Like a virtuoso BT engineer about to perform a symphony on a street-side telephone exchange box. But she has all the presence she needs to fill that stage and then some. And the Buchla has all the warmth and character flowing through its circuitry to fill the cavernous main hall at the Barbican with pulsing waves of electronic harmonics. And then some.

Performing electronic music live in front of an audience always comes imbued with a sense of risk, as anyone who has been brave/stupid enough to try will attest. What if something doesn’t work? What if a plug fuses or equipment fails? What if an oscillator drifts out of tune or a memory bank refuses to load? As you watch Ciani, with her hands dancing across the racks of modules pulling out patch cables at the speed of light, you feel this sense of nervousness. As she flicks switches on her sequencer, swipes at the screens of her iPad controllers your chest tightens and you feel the presence of those malignant technical gremlins lurking amongst the wires waiting to derail the proceedings. But then you remember who it is you are watching. You remember she has the weight of half a century’s experience in electronic music performance behind her and finally you allow yourself to relax. When it comes to live electronic music improvisation, this woman quite literally wrote the script.

Ciani’s performance is mesmerising. She leads us on a sonic journey through abstract noise, wandering arpeggios and scattered machine rhythms leaving the audience captivated and entranced. If you closed your eyes you would presume the performance was effortless but the screen above her shows a glimpse behind the magician's curtain. You can clearly see just how hard she is working as she patches cables on the fly and her hands dance across the controls of her Buchla. And boy does it the Buchla sound good. I was really struck by the sonic range of that iconic modular synth that Ciani has worked with for decades. Sometimes it sounds thin, distant, delicate. But when the full force is unleashed and that warm rounded bass kicks in it hits you in the stomach and makes your vision go as wobbly as a blancmange in a wind tunnel. It’s solid, tactile, crispy around the edges. Clean when it wants to be, dirty as hell when the modulation crushes the waveform beyond all recognition. As she finishes her performance and graciously accepts the rapturous applause I think to myself “oh man I wish I had a Buchla”. But then I pause. Because if I wanted it to sound anything like it did tonight then I would have to have a Suzanne Ciani too and I believe they only made one of those.

After the interval it is the turn of Alessandro Cortini to disrupt the air molecules in the auditorium and disrupt our minds. And the sonic results couldn’t be more different to the freeform expression of Ciani. Slow, methodical, sombre; Cortini sets up simple repeating melodies and rhythms that wash over the audience. Then he changes one element - a dissonant note here, adding an extra layer of texture there - and slowly dissolves your consciousness into a bath of harmonic fuzz. Each piece builds into a crescendo of sound that simultaneously channels elements of darkness and euphoria that belie his years touring as keyboard player for Nine Inch Nails. 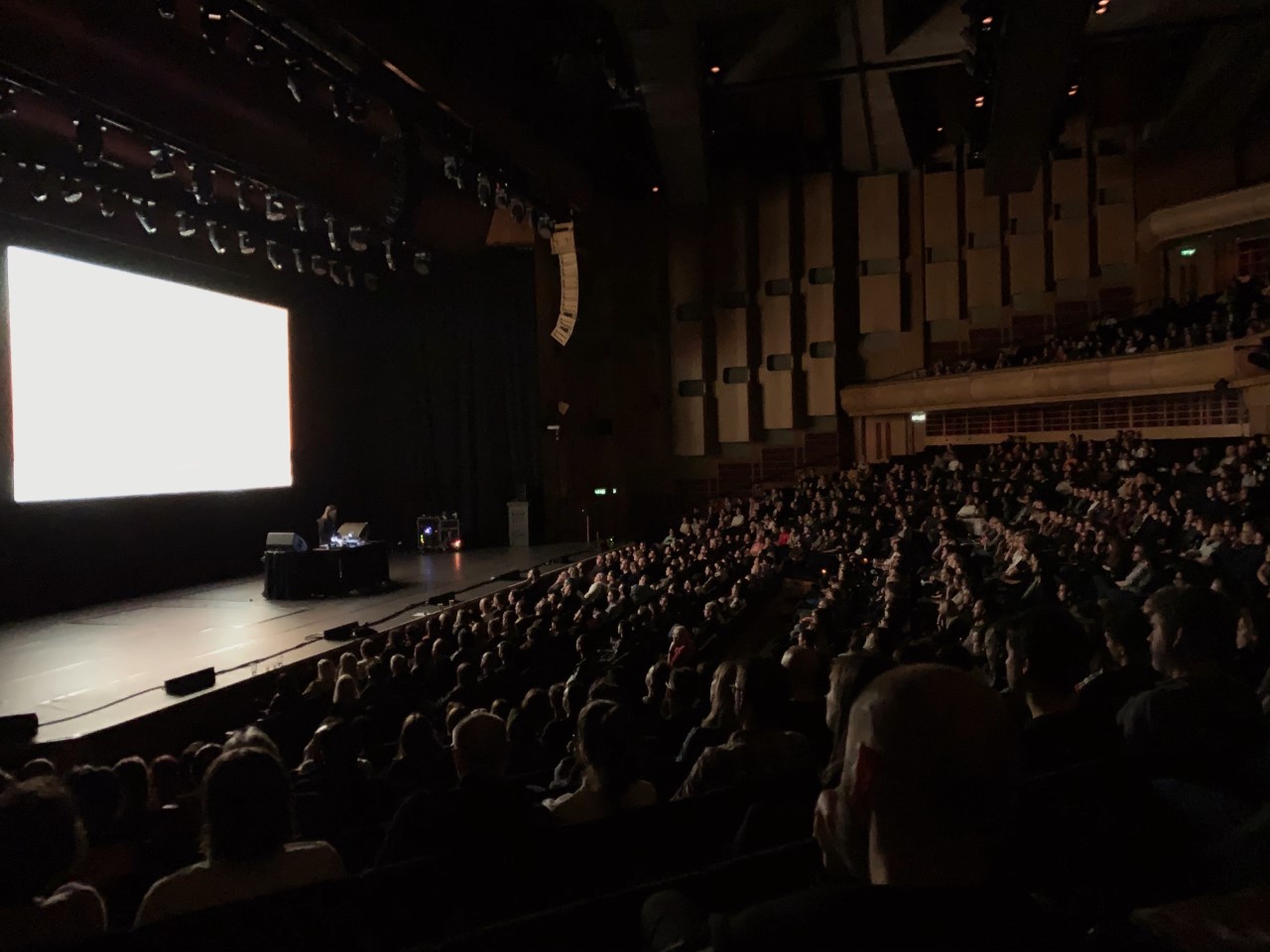 While Cortini’s performance is excellent he sticks mainly to the script of his recent (very good) album Volume Massimo which just dropped on Mute. This is understandable as the sound links in very closely with the accompanying video, but that’s where things begin to break down. The visuals start promisingly with shifting abstract forms and contorted human bodies that perfectly underpin the uneasy aesthetics that Cortini is conjuring with his music. But then things begin to go off-piste. The video moves on to strange narratives with dancers flitting about in abandoned buildings with cardboard cones on their heads and it all starts to feel a little ridiculous. I’m sure the choreography and photography are all expertly done in their own right, but before long it all starts to detract from the incredible sonic journey that Alessandro is leading us on. While some may well enjoy the visual element, for me it was a distraction from what was otherwise a powerful musical experience.

As I step out into the sharp autumn night my head echoes with a pleasing menagerie of sonic textures from a hugely enjoyable night of live electronic music in a truly iconic venue. The pairing of Suzanne Ciani and Alessandro Cortini has served up an evening of contrasts and complements. Of visceral sonic energy and softer tones and textures. On the way to the tube station I’m still pondering the incongruous visuals but then I walk past a downbeat dog wearing a cardboard cone of shame and then suddenly it all becomes as clear as daylight.