Barbican’s exhibition exploring the many galaxies of science fiction has scored strong reviews, and on first entering the buildings crammed crescent gallery – not the most spacious location at the best of times – it’s clear from the sheer amount of ephemera on display they’ve gone for a stack ‘em high aesthetic that should please sci-fi’s more obsessive collectors.

Most of the big hitters are there in one form or another. There are Ray Harryhausen sketches, models and storyboards galore, covering everything from King Kong knock off Mighty Joe Young to the dinosaurs battling cowboys nuttiness of The Valley of Gwangi to the finely crafted models used to create the iconic UFOs of Earth vs the Flying Saucers. It’s all foundational stuff – the Gwangi artwork in particular is beautiful. Elsewhere there are plenty of illustrations from Jules Verne’s proto sci-fi tales, and a few odd little curios such as a magic lantern rendition of Around the World in 80 Days.

The modern age is covered by inevitable artefacts from Star Wars and Star Trek, a couple of bits and pieces from Interstellar, and some fascinating sketches and models from HR Giger’s work on Alien (although, it’s gotta be said that these all come from Alien 3, strong contender for lamest film a franchise with no shortage of duds). Of all the film props, the fake toys from David Cronenberg’s eXistenZ were the most appealing, the level of detail of the fleshy brain plug-ins designed to look like cheap factory packed games were testimony to the unpleasant depth Cronenberg brings to his work – even to slightly ropey duds like eXistenZ. 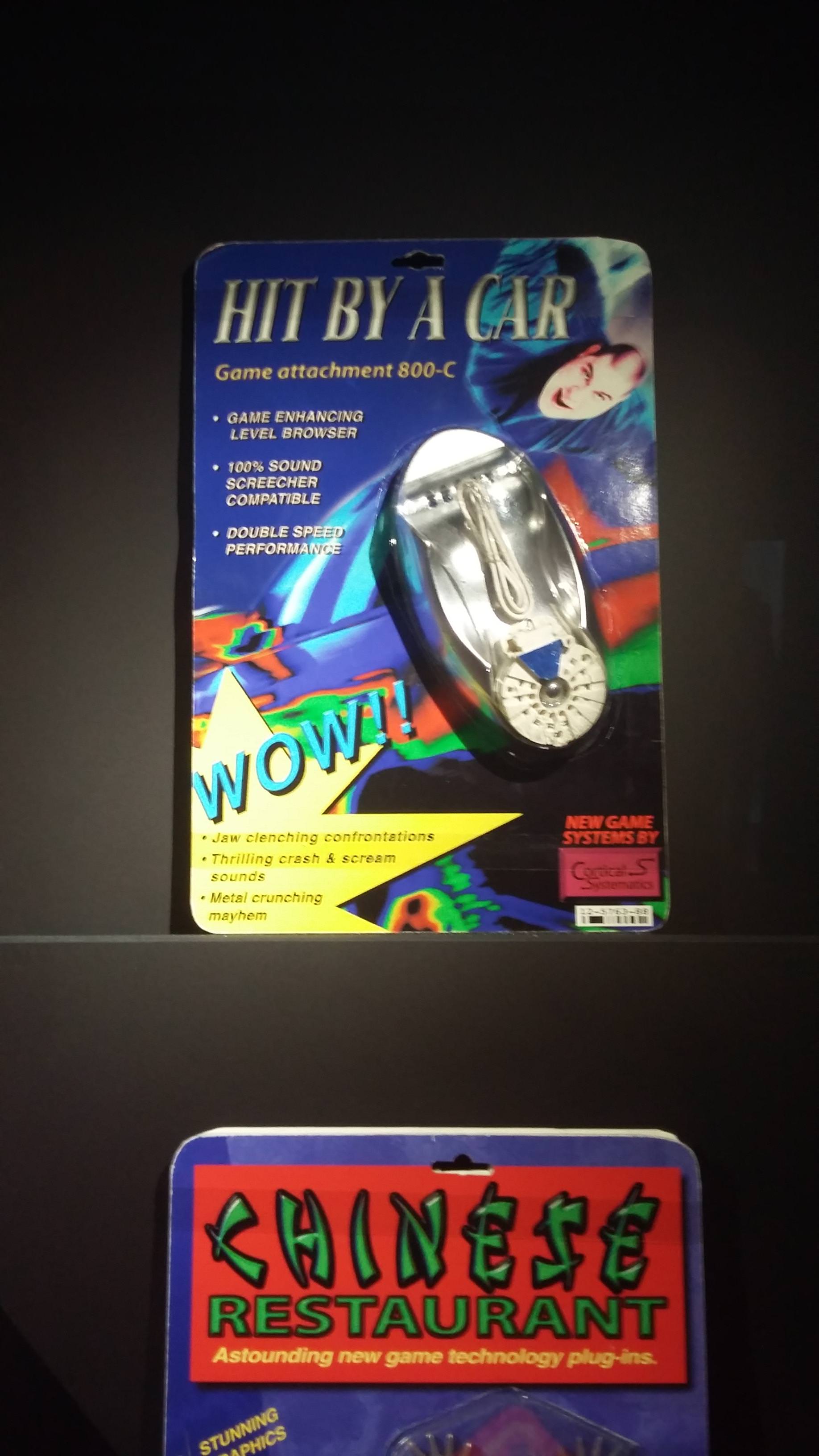 Staying on the positives, my absolute favourite thing on display was a full run of Mars Attacks cards, the 60s collectable cards were made by a misguided company who thought kids would love to see a series depicting a truly horrific alien invasion. As it turns out, they were right. Kids loved it, but parents had a shit fit over such classics as the mutt-frying ‘Destroying a Dog’ and the implied alien rape of ‘Beast and the Beauty’. Inevitably, the cards were rapidly pulled from production. They later resurfaced in 1994 (along with a few entries that had been deemed too full on to go on sale the first time round) and went on to form the backbone of Tim Burton’s 90s flick of the same name. Nothing quite captures the demented glee of the bastard martians quite as well as this set of moral panic sci-fi. and I'll always love this guy; 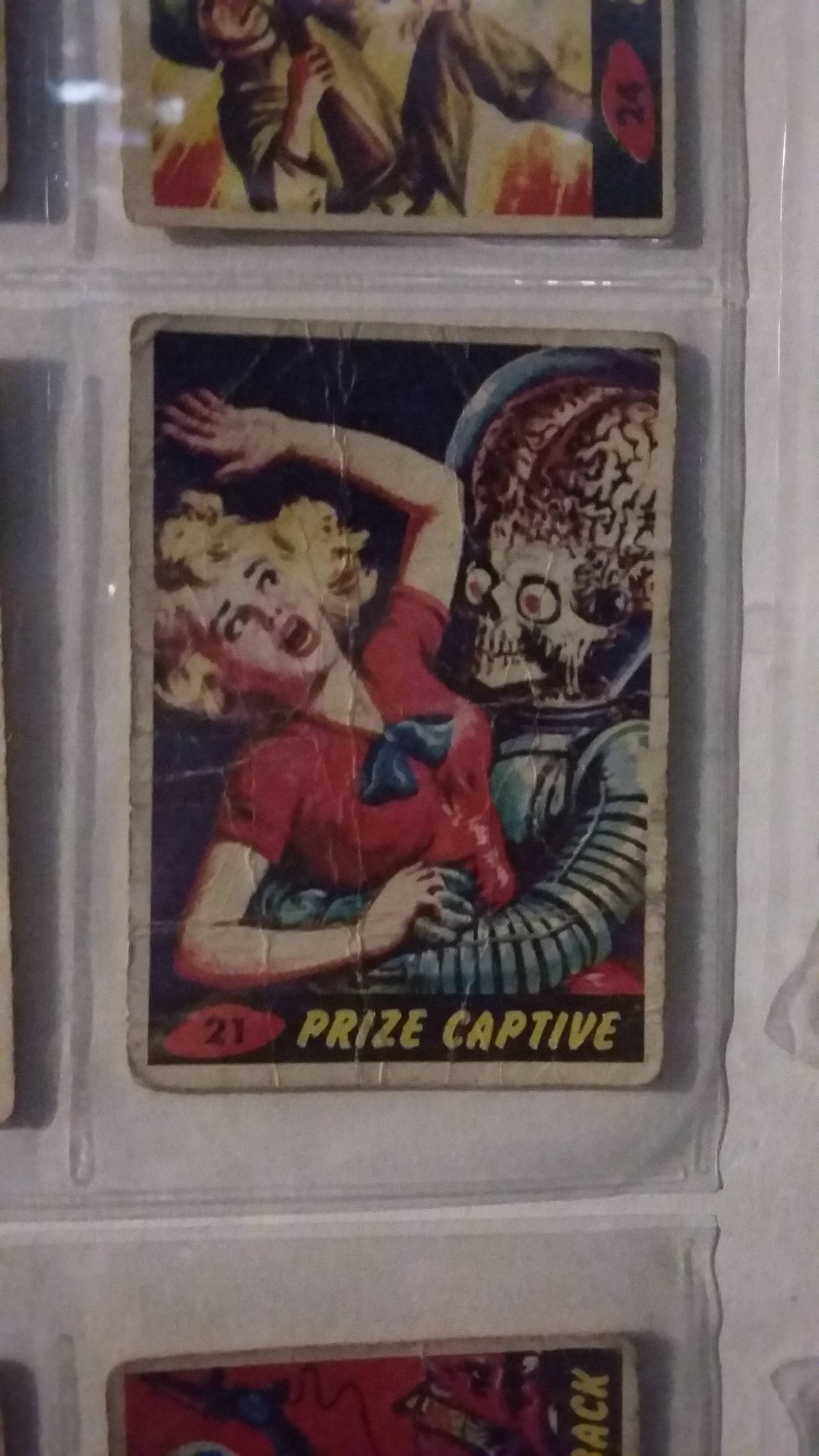 Elsewhere there are numerous cabinets stuffed with first editions of sci-fi novels. They’re grouped by themes, and other than what can be gained admiring the covers, there’s little information on the individual texts. This is pretty frustrating – if I hadn’t read the Octavia Butler books on display, I’m pretty sure that some info on her would have made me want to know more – so who knows what else might have been there?

And this is really getting to the crux of why so much of Into the Unknown was a disappointment. Sci-Fi is a genre with potential to mine vast tracts of human imagination, but imagination was in distinctly short supply. Items were rammed in in such a prosaic manner, largely shorn of context, that most of the exhibition felt like a nerd showing off rarities, only interested on whether they were rare, not what they meant. This started right from the opening, where Jules Vernes proto sci-fi was accompanied by text talking about exploring ‘dark continents’ with literally zero mention of the colonial European project that was making the idea of ‘dark continents’ exert such a monstrous hold over European imagination.

Rather than understand sci-fi as a way of understanding – and perhaps even changing – the world around us, Into the Unknown seemed to offer a very narrow definition that liked things just how they are. It had far too much focus on the kind of predictable chaff that has kept the merch business cranking on for years; less Into the Unknown, more Into the Turgidly Familiar. With only limited space, did they really need to devote cabinets to ho-hum churn such as Species, Enemy Mine and Star Gate – I can only assume this stuff was there to satisfy the dull nostalgia of 70s babies. There was no manga, little on the beautifully crafted Russian sci fi films of the 50s – 80s (you would have thought that at the very least Tarkovsky could have got a look in), nothing on cyber-punk, almost nothing on Afro-futurism, a single page of 2000AD with no explanation, and nothing on how science fiction has played with ideas of the alien in our society. Instead what we got was sci-fi as served up by Hollywood, and for every exhibit dedicated to leathery props from some big studio flops, I found myself thinking how much more fun I would have had looking at stuff from genuine b-movies. 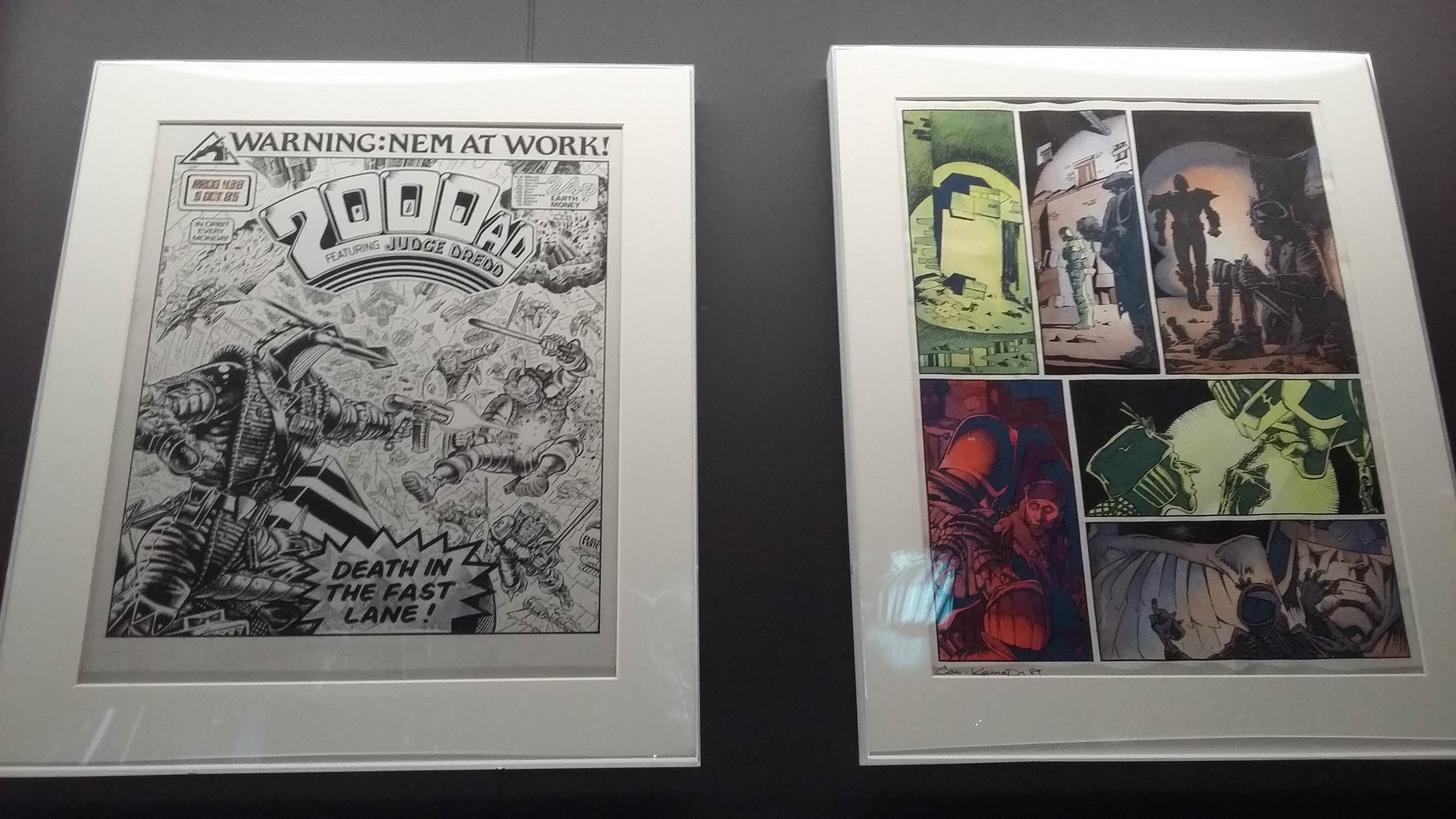 More damning, even if the exhibition sought to provide the final word on mainstream sci-fi, it failed on its own terms, hamstrung by baffling gaps in the collection. There was not so much as a striped scarf from Dr Who, nothing on Metropolis, and most glaring of all, nothing whatsoever on video games –the greatest drivers of science fiction in the last 20 years. I’m pretty sure the audience they were apparently aiming at would have lapped up a Space Invaders cabinet, or some artwork from Half Life 2, and it’s bizarre they didn’t think to include anything of the sort.

So ultimately, despite the occasional highlights and the clear (if directionless) enthusiasm of the curators, Into the Unknown was something of a let-down. Not a total waste of time – if nothing else the Harryhausan sketches would be worthy of entry alone - but so far short of what I’d hoped for. Ultimately it’s best purpose was to remind by omission just how much excellent science fiction there is out there – and that we’re still waiting for anything close to a definitive exhibition of it.

Into the Unknown is on at Barbican until Sept 1. Standard tickets £14.50. More info here.