All the usual Clowesian themes are present and correct – the cast are a misanthropic collection of likeable losers, pointlessly aggressive losers, sleazy assholes and vicious imbeciles. Many locations are likewise familiar; small town diners decked out with cheap Americana, run down apartments with minimal possessions, bad parties, and lots of panels featuring people pounding the streets; streets that invariably stretch out for miles of dull, unwelcoming terrain. But there a couple of major differences betwen Patience and Clowes's previous outings. At 180 pages it's his longest single volume work to date. This is his first of his books you'd describe as action packed- anyone expecting another languid suburban satire where nothing much happens to mean spirited outsiders is in for a shock - to use a comparison Clowes would probably detest,  Patience reads as though he's decided to make a Nolan Brothers film; the book is long, dark, violent and complex.

Without wanting to give away too much, the story revolves around the classic time travel question – If your life was utterly changed in a single moment, what would happen if you could go back in time to change that moment? Following the plot sees Clowes take the story up to the year 2029 and back to 1985, with all manner of futuristic ray guns, vicious brawls and whodunnit thrills along the way. He uses the fantastical nature of time travel to push his style further than previously seen, from imagining the future as a world where prostitutes with odd skin tones take weird drugs in apartments full of soft furnishings, to delivering some truly mind bending time travel artwork. When unlucky protagonist Jack starts following his one true love through the years, Clowes draws his most psychedelic work to date- fleshy Cronenberg explosions that warp the borders of his panels. As an artist who has generally worked in either black and white or muted pastels, this new shock of lurid colour is a revelation. 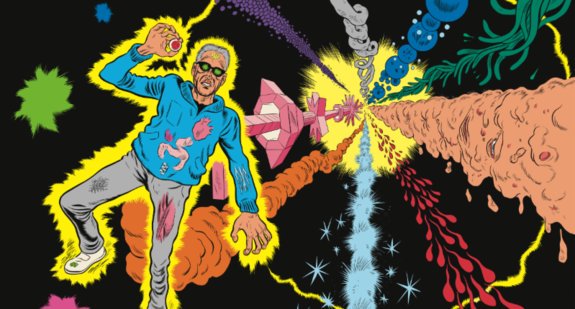 The only thing really missing is the humour. As Clowes’ work goes, Patience is a relatively dour read- there’s the occasional wry smile raised by the dialogue (at one point Jack has to get in to an achingly hip 80s night club. When the uber cool door picker asks him why he should be let in, Jack replies, deadly serious, “because I’m from the future and I’ll incinerate your kids.” “Right answer” beams the door man), but, unlike much of Clowes’ previous work, the laughs to be had from pinpoint social satire come far less frequently than gut punch depictions of the realities of life on skid row. Jack’s girlfriend, the titular Patience, has a particularly rough time, enduring all the dull cruelty that small town America can muster. Patience feels like Clowes writing a hard-boiled detective tale for the austerity age; Jack opens the book broke and hopelessly taunted by unobtainable riches. “All this wealth in the world,” he mooches “it’s just insane how much there is. And every day it seems more and more like I’ll never see a dime of it.” This downbeat tone permeates the book; it’s the story of a guy fighting to beat circumstances that feel beyond his control in a cold, shitty world where no one cares. Were it not for the surprisingly tender core, it might prove unbearably bleak. Instead Clowes has created a complex anti-hero, a flawed, near psychotic tough guy whose iron hide occasionally slips to reveal a love that has him questing through time and that keeps us reading. Added to this is a Hitchcockian sense of pace. The tense concluding scenes had me flipping pages frantically, with no sense of whether the escalating drama would resolve itself in joy or despair. No doubt a Hollywood executive is in talks to option the book as I type. From a personal stand point, I’m not sure if Patience is my favourite of Clowes’ later work – he’s a writer who can make me laugh out loud, as on 2010’s Wilson, and I missed that here. But maybe there’s just less to laugh about these days, and this is still a very strong work- as an artist and writer Clowes is so far beyond the majority of his graphic novel writing contemporaries that it seems disparaging to put him in the same category. The embracing of wilder art styles and tighter, thriller-style plotting is also welcome. Patience should – and probably will – break out of the graphic novel niche to find wider acclaim, and at the very least it proves that Daniel Clowes in his 50s is as vital as he ever was.