Good news boppers! The Warriors is a film that refuses to go the way of 1970s New York…

Good news boppers! The Warriors is a film that refuses to go the way of 1970s New York…

“These are the armies of the night. They are 200,000 strong. They outnumber the cops five to one. They could run New York City. Tonight, they’re all out to get the Warriors.”

So runs the tagline for the poster for The Warriors, the seminal 1979 film that writ gang culture large on the screen and became not just a cult favourite, but a VHS must-watch, a rite of passage or initiation for any mad-keen video fan in the UK and elsewhere during those halcyon days of top loading VCR machines.

That The Warriors has outlasted its appeal beyond the VHS era and maintained its popularity into the digital age is testament not just to Walter Hill’s film itself, but everything around, from the poster and that infamous tagline, through to its multitude of different gangs and their outfits, including the notorious Baseball Furies, its much-sampled dialogue (Renegade Soundwave et al), accompanying soundtrack (the subject of both a slew of re-edits and a deluxe release of the score on sumptuously packaged vinyl via Waxworks Records) and much, much more.

And now fans from these shores and far beyond will be gathering in Birmingham (yes, Birmingham) this weekend (April 1 and 2) for a gathering of the tribes, a UK conclave, a celebration of all-things Warriors-related. Such is the power of The Warriors and its gangs.

“It seems to resurface once every few years,” explains Vic Wright, the man behind the UK Conclave. “it just seems to go on and on. It has cult status and it still seems fresh.”

He fell in love with it, like many of its devotees, on its first VHS release. 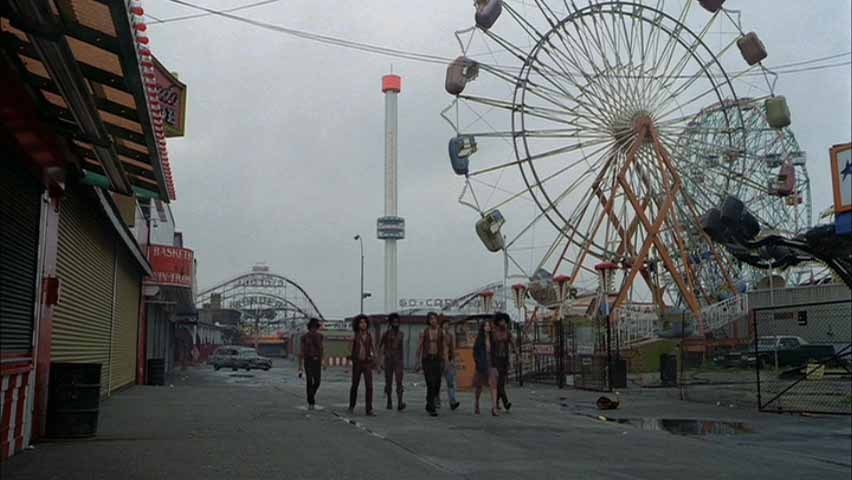 “The film came out in 1979, released on VHS in 1981,” he says now, “at the time I was courting a young lady, turned up with it in her hand, with that sleeve, and we watched it. That was my first encounter with The Warriors, and I’ve been in love with it ever since.”

New York gang culture at the time was still very real, with real life gangs such as the Rubble Kings (subject of a powerful documentary released last year) ruling the streets. And while homegrown gangs on this side of the Atlantic didn’t quite have the same resonance, there were still parallels.

“There was a revival of the teddy boys, skinheads, punks, there were all sorts of peoples in gangs and it was all across the UK. There was a lack of jobs, a lack of future for the young, what was going on at the time. I don’t know anybody who didn’t see it at the time. Everybody spoke about it.”

The roots of the story, about gangs meeting together to team up and take on the authorities, was borne out of real life. As Kevin Bergeron, the co-founder of Waxwork Records, the company behind last year’s release, notes: “The narrative of The Warriors is actually a true story. It's something that literally happened in 1970's NYC. Gangs were running rampant, crime was at an all time high, just totally out of control. And then, the gangs called a huge meeting to form a pact, to call a truce and start a decline of street violence.”

“When it was written, there was an understanding of what was happening with the gangs, that all of them had got together and had a conclave,” says Wright. “There was that, and it was put into the Anabasis story of the Greeks, which was a big element of it too.”

Wright has unearthed memorabilia and vast collections of Warriors-related ephemera, while Bergeron and his team had access to the Paramount vaults for their vinyl release in 2016. The look and feel of the film is a crucial and an important part of its longevity. This writer has amassed a few bits over the years, taking in everything from a promotional baseball bat festooned with the assorted gang logos as well as a wealth of predominantly street wear brands, such as Fuct and SSUR.

That look, from the poster and beyond, informed the Waxwork release, as Bergeron explains: “We unearthed an entire library of unreleased / unseen photos from the set of The Warriors from Paramount Pictures which was a big deal. There was a lot of new art, slipcases, and even Warriors gang back patches. Who could say "no" to that?

“[The imagery and logos] are certainly part of the appeal. The gang logos are so great. Really jagged, and imperfect.”

And then, of course, there’s the Baseball Furies, the iconic gang from the film who look the part, despite the fact that – spoiler alert for this that haven’t seen a near-40-year-old film – get rolled over a touch too easily. An online survey pegged them as top boys in the Warriors universe despite the fact that they melted as soon as the going got tough. As Wight explains: “They look great, there’s that NY Yankees feel, the baseball kits, the bats are in there. They really look cool, but when it came to the actual fighting they were nothing but wimps.”

Furies gear, along with other memorabilia, and many of the original cast in tow, alongside devotees from around the world, will be in Birmingham over the first weekend of April, and while it may be miles away from New York, in many respects, New York 2017 is light years away from how it was back in the ate 1970s. And again, therein lies part of the film’s enduring appeal.

“The New York in the film has completely disappeared,” concludes Wright. “All those old buildings, all that has just gone now.”

“It’s a window into 1970s NYC,” adds Bergeron. “The Warriors is like this historical document of a certain place and time. Also, 1970s NYC... It was totally shitty, but we will romanticise it forever.”

Despite it being so wedded to a time and a place for many, the world of The Warriors will always, Bergeron further notes, remain current for many, thanks to all those elements (including the soundtrack – “It's quintessential 1970s and we can dig it!”): “I think it will always retain cult status, however, it's influence on other films, pop-culture, music, fashion, and so on is really apparent. It has tentacles that reach way beyond what the creators of the film probably could have ever expected. There's even an official video game and Halloween costumes.

“Interest in the film is always rumbling and screeching underground like a subway car on it's way back to Coney.”

The UK Conclave takes place on April 1 and 2, more details HERE. The Warriors from Waxwork Records is available HERE and in all the right record shops.

As the film charting the rise and fall of Mo Wax is released, and with the backlash in remission, the rehabilitation of James Lavelle continues. Looking at the film and back on his career, the Mo Wax founder and UNKLE figurehead says, “what I went through, that’s the rock and roll dream".