When we write about the history of rave music, we understandably focus on the people who spent their lives crafting the sounds that set our minds in motion. But, of course, the culture goes well beyond just the music makers. We often overlook the fact that before you heard the record that changed your life, you probably saw the cover sitting on the shelf behind the counter of the shop. Before you joined the queue to get into that warehouse to lose yourself in the sea of sweat and pulsing bass, your eye fell upon the flyer splashed with an alarming riot of sci-fi imagery that told you that if you come to this rave we’re going to take your mind and blast it into outer space. You were confronted by alien cops and cyborg women backed by imaginary landscapes that would make even the most way out surrealist painters feel the sudden urge to have a glass of water and a lie down.  And, if you were frequenting UK raves in the 90s, the chances are the crazy designs on the front of that flyer came directly from the mind of Junior Tomlin.

But Junior’s story doesn’t begin and end with rave. In fact, that’s only a small fragment of his thirty-five-year career working in comic books, film, live events and more. With a new book out now that charts his pivotal work both as a record sleeve artist and flyer designer that helped shape the visual identity of rave culture, we jumped at the chance to chat with Tomlin to delve into his long history in creativity.

We meet over Zoom and the first thing I’m struck by is the picture that hangs behind him that is clearly a piece of his own work. My comment on this leads to an impromptu tour of the walls of the room where his framed work surrounds him. As he points to each piece, I get a sense of warmth and enthusiasm for his art that hasn’t been dulled by his many years in the game. 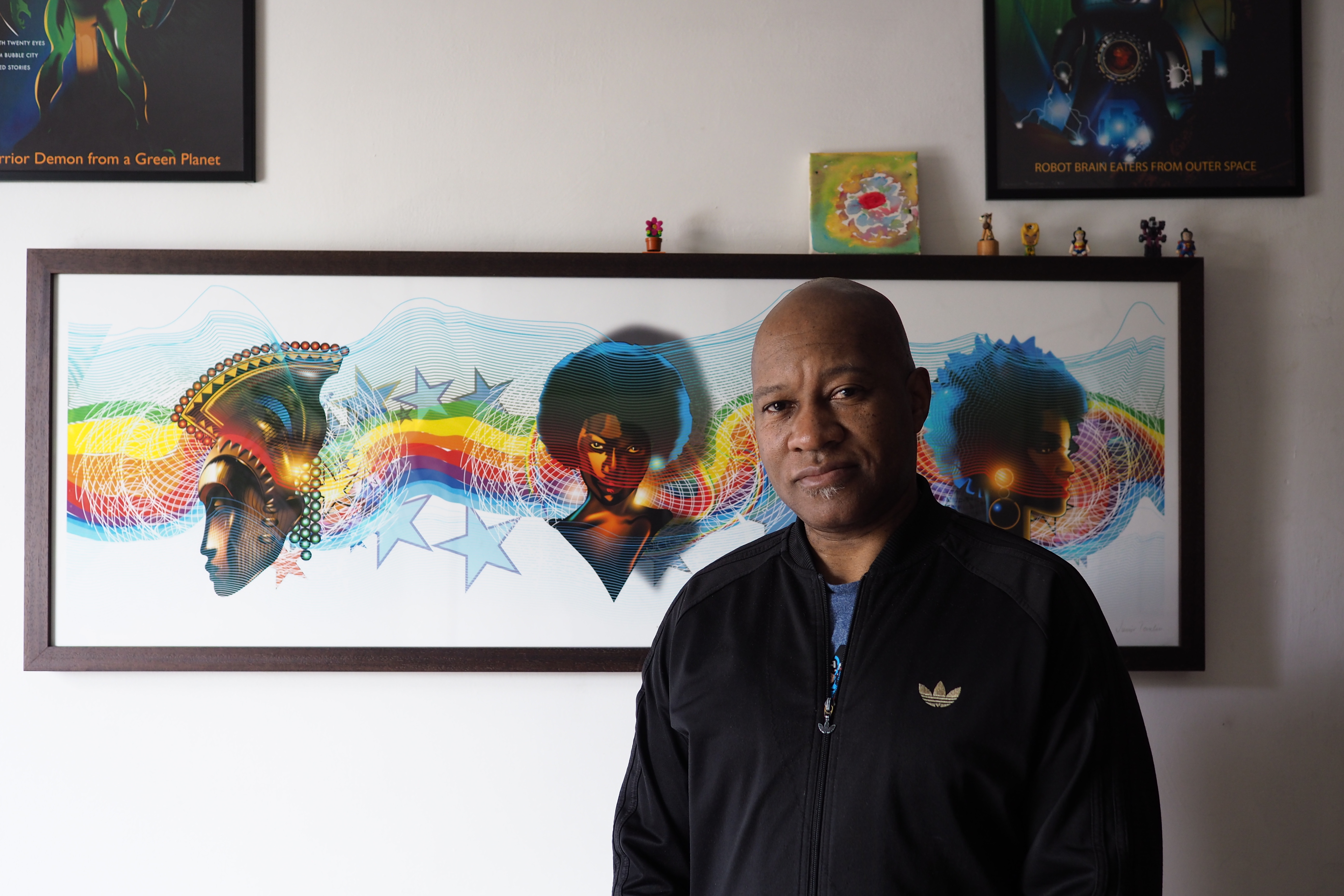 Tomlin was born and bred in Ladbrook Grove, west London, where he still lives now. He was a child of the 60s and I was interested to find out what sounds surrounded him in his early years. “I grew up in a house that was basically all reggae,” he tells me. "The whole family used to sit round and listen to the reggae shows at the weekend.” He laughs remembering the troubles of trying to record the shows onto cassette tape. “The DJ used to talk through the songs, and then you had to take out the tape and rewind it with a pencil and all that.” This was how he got turned onto dub music, and in particular African Dub Chapter 1 by Joe Gibbs which he tracked down and started him on his own personal journey into music.

But at the same time as he was immersed in the sounds of dub and reggae, his young mind was also absorbing the exciting science fiction that was beaming out of television sets and from cinema screens.

“I grew up in the 60s so we had things like Lost In Space, Time Tunnel, Voyage to the Bottom of the Sea, Star Trek, and the films of that particular time. But it was Lost in Space that really got me." 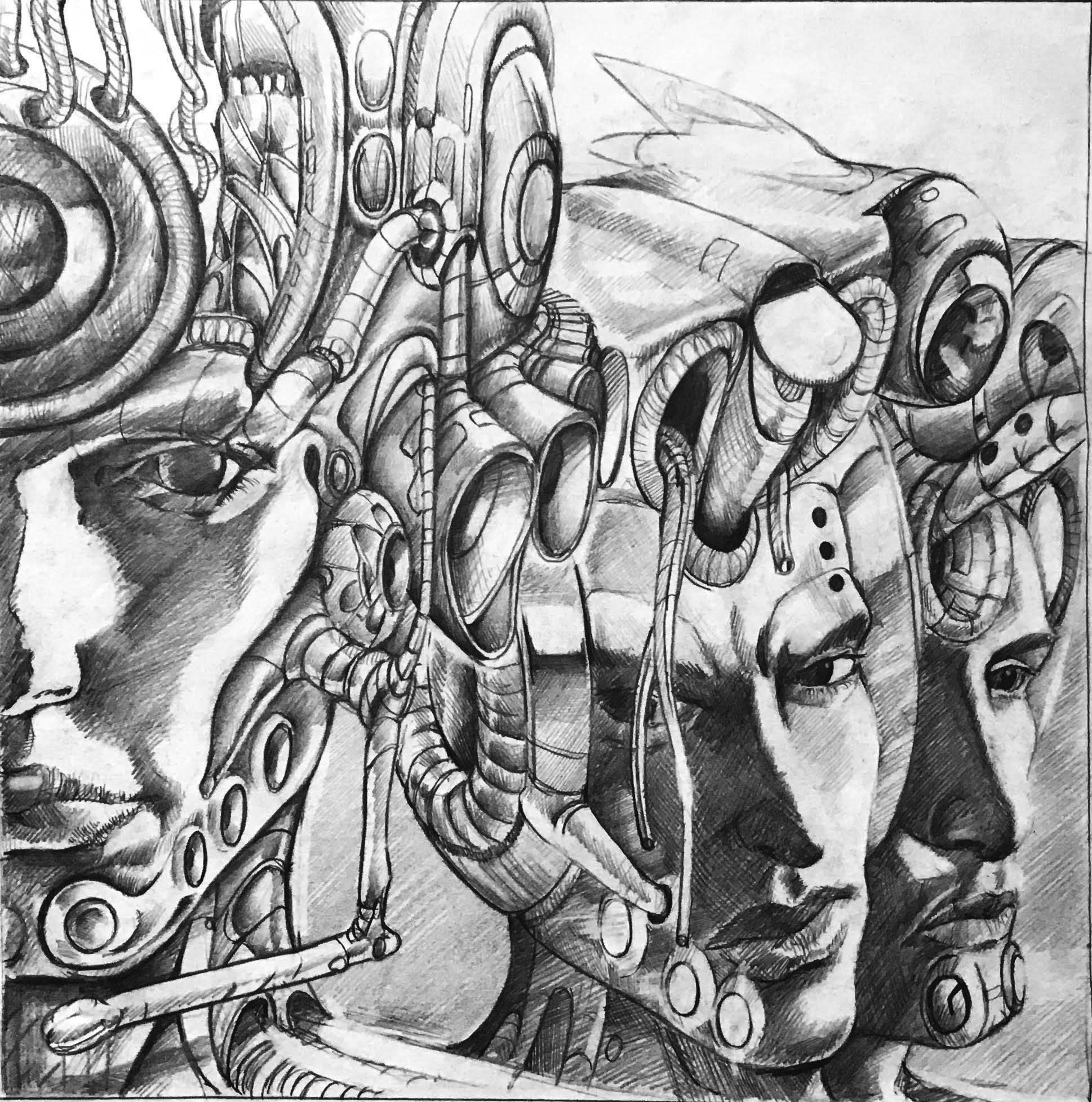 Was it the escapism that drew him in?

“Yes, definitely. Everything was so exciting and it was set in space, but the people in the future have got all the same angst and problems that they do today on earth. So, it’s very relatable.”

His love of drawing came from an early age. There wasn’t much paper or materials around the house but Tomlin just doodled and scribbled on whatever scraps he could find. Then later at school he would do drawings for his friends as they all knew him as the kid who was good at pictures, but when it came to taking his art A Level his wild, imaginative style ended up earning him an E. He tells me this with a big grin on his face but I wonder if this didn’t set his confidence back and make him want to give up?

“Well I knew they were wrong,” he laughs. “I knew I had talent.”

Unperturbed, he forged ahead, taking his foundation in graphic design. But what did his parents think?

“Well my mum was ok with it because she didn’t really say anything. But my dad had this idea that he wanted me to become an architect. And the lovely thing about growing up,” he says with a wry smile, “and about fathers in particular, is that they want you to become this, but they don’t show you anything to get you interested in it.”

But in spite of his father’s different career plan for him, he did appreciate Junior’s talent. “He did like my artwork though. He would stand over me and watch me draw. He never said anything, so it was hard to gauge.” 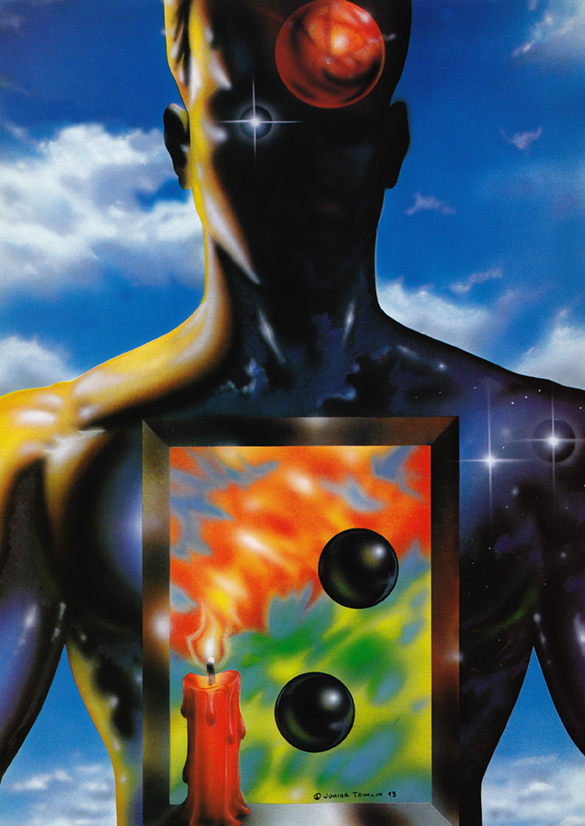 After art college Tomlin’s first job was designing computer game packaging for the Atari and the Amiga.  His first commission in the mid 80s was to do the cover for a game called Sun Star, and then he was away. Over the coming years he would become an expert in airbrush techniques, inspired by sci fi artists such as Chris Foss and Jim Burns and this was what unwittingly drew him into the world of music and rave design.

“I was working as a tutor at the London Cartoon Centre, and one day the manager for Renegade Soundwave came there looking for an airbrush illustrator to do the next cover for the band and that’s where he found me.”

And the result was the sleeve design of Space Gladiator, which is the image that adorns the cover of this new book. The design was pure sci-fi, with a sleek Robocop like figure with shining metallic armor and finely airbrushed finish that would look just as comfortable on the cover of a video game or a sci-fi novel as a record sleeve. From there he fell headlong into the world of rave music, doing more covers for Renegade Soundwave and The Scientist, and flyers for seminal parties like Dreamscape, Slammin Vinyl and Telepathy.

Did he go to the raves though?

“Yeah when they put me on the guest list,” he laughs. 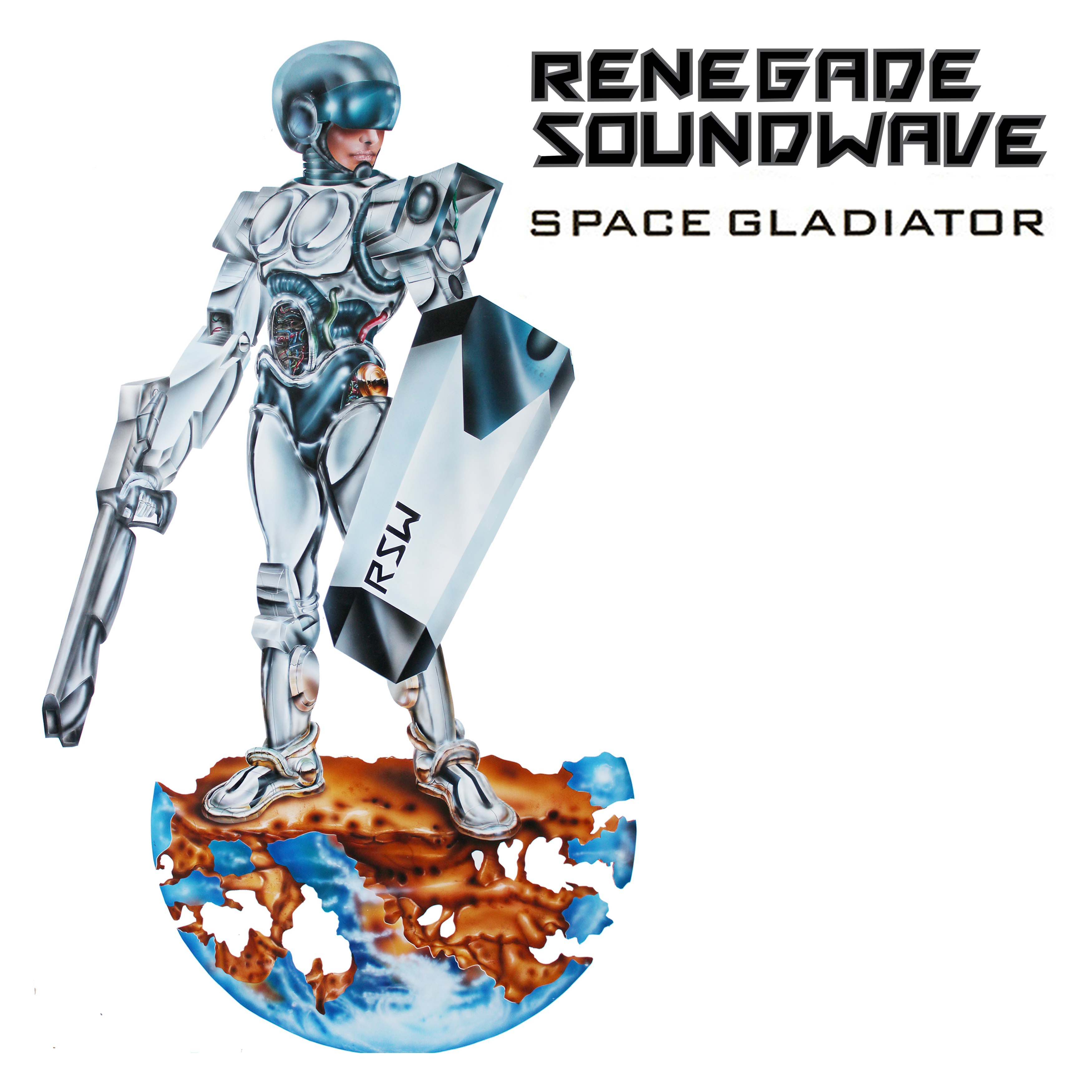 Our conversation turns to black representation within the realm of sci-fi. Of course we are all aware of the recent phenomenon of Black Panther, but for a long time it seemed that the only space the mainstream would accept black expression within science fiction was through music and record covers, with the likes of Sun Ra and Parliament Funkadelic pushing uniquely black perspectives that cut against the predominantly white dominated culture. But Tomlin thinks things have changed, and continue to change.

And through his own explorations in this field he has opened up his own artwork to new networks of black science fiction and fantasy.

“About two years ago I got in touch with this man called Milton Davis who is a black science fiction writer in the States. I showed him some of my artwork and there was one particular piece he liked so he bought it to be used for one of his anthology covers.”

But while black creativity within science fiction goes way back, the word Afrofuturism is only a relatively recent term, being coined in the mid 90s and only becoming widely known even later still. So I wonder whether he considers his own work as part of Afrofuturism?

“Yes, I would consider my work Afrofuturism, because even not knowing that name, I was actually doing it all those years ago.”

And were there black artists or writers who were inspirations to him when he was growing up and developing his skills?

“No. I couldn’t find them. I couldn’t find the black creators. It was only when I was working at the London Cartoon Centre that I came into contact with other black creatives at that particular time. One of my good friends from that time, Doug Braithwaite is a leading artist doing work for the likes of DC and he’s damn good at it too.”

As the conversation comes to a close I pull a cruel question out of the bag, and ask for Junior to pick a track that he feels sums up the energy and ethos of his work. After a lot of understandable humming and hawing, Tomlin begins to reel off a list including artists like Ed Rush, 4 Hero, Johnny Jungle and Omi Trio but the first track that slips off his lips is the collaboration by The Aphex Twin and Phillip Glass Icct Hedral and the combination of the classic and the modern, the dark atmospheres and the desire to take things beyond the regular bounds of rave seems to sum up Tomlin’s work pretty nicely indeed.

A Soundtrack for the Sea: Ian Urbina talks about the musical counterpart to his book 'The Outlaw Ocean'

Human trafficking, slavery, conservation, piracy and more inform the soundtrack to one of the most important books of the decade.

How exactly did a member of Gong inspire a snooker world champion to take up the modular synth and lose it to drum ‘n’ bass at Pontin’s?

"I have a complex relationship with it. I realise how unhealthy it all is. But it has its place (for now)."

"We were surprised when a 1000 people followed the Club Quarantine account by the third day of making the instagram."