Debating with the devils in Pandemonium, Milton’s Mammon suggests Hell should be constructed to imitate Paradise: “Nor want we skill or art from whence to raise magnificence,” he says. “And what can Heaven show more?” Advertising Shits In Your Head promises the opposite. It is a manual for seizing the tools of Mammon – public relations, private property – and replacing the advertisements that saturate our cities with art or political slogans.

Though the book offers a theoretical justification of vandalism, a desk-bound review of such a work would be somewhat lame. So I went along with the Brandalism crew as they put theory into practice on the pandemonic streets of London.

It is impossible to move through the city without seeing them: every candy-cane surface vibrates at its own particular tenor, screaming or singing of cut prices, of capital, of unmissable deals. “Disrupt!” urges one self-perpetuating ad for ad space. “87% of people look at me.” Another, advertising cosmetics, brags that its products are “cruelty free”. The average commuter sees 3500 marketing messages every day. 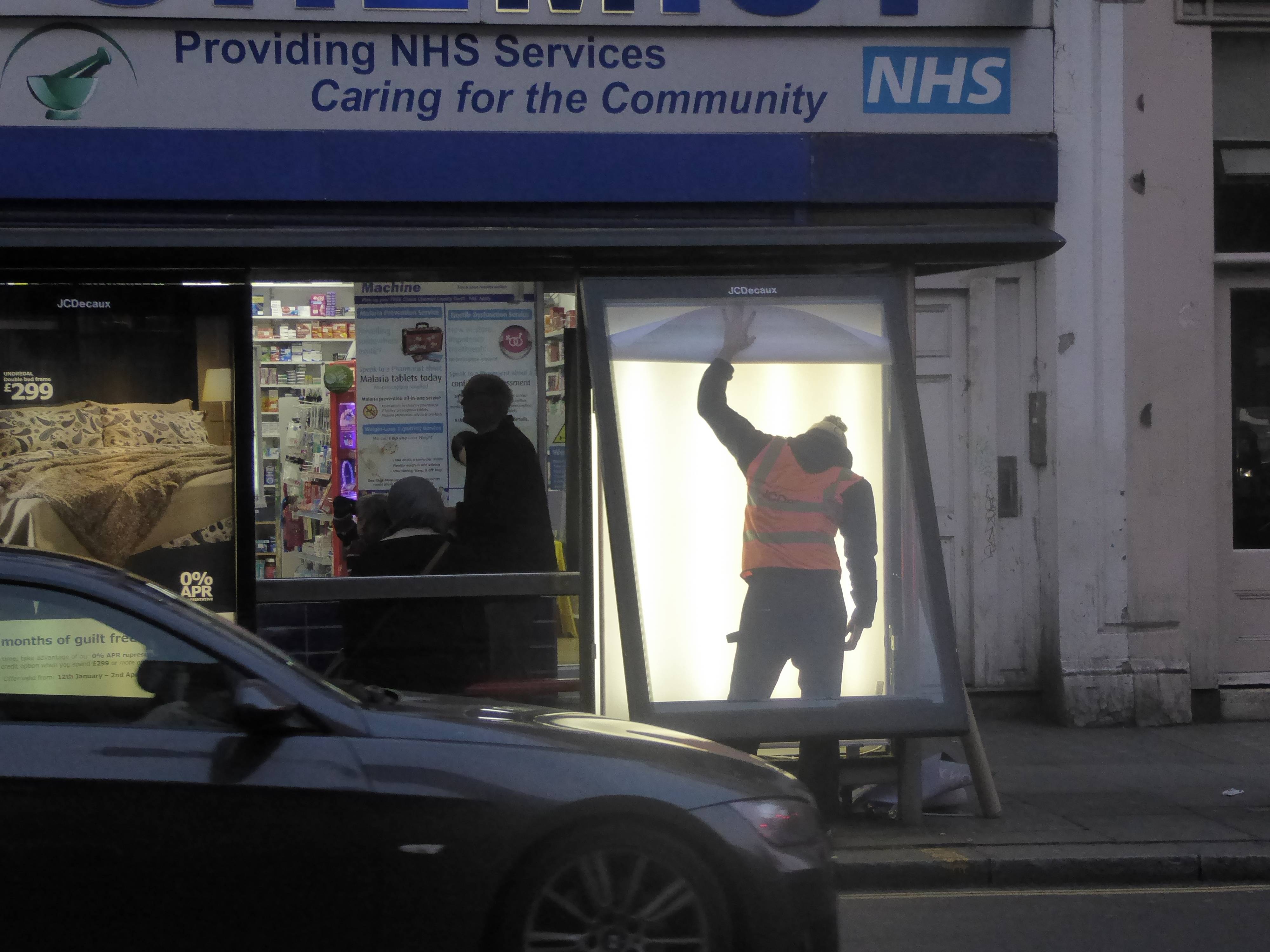 Impossible, also, to move through London without being seen: CCTV cameras crane hungrily and armed cops stalk every corner, golems with the Evening Standard for a shem. After cloak-and-dagger communications through encrypted email I meet the book’s anonymous author, who I will call Don, in an equally anonymous branch of up-market sandwich chain Pret A Manger.

Much like our clandestine meeting, Advertising Shits engenders a revolutionary thrill, as citations recur from the same few pseudonymous figures and Liberation Fronts. Sketching the histories of these radical collectives, Don distinguishes between those who consider themselves more “artist than… activist” and those who focus on subvertising as political subversion.

Falling squarely in the latter camp, Advertising Shits is a back-pocket manual, not a coffee-table tome. Verve is provided by full-colour photographs of daring urban interventions, rather than the spare, tongue-in-cheek prose. (I'd love to read a work doing for ad-hacking what seminal, rambling punk zine Evasion did for skip-diving and shop-lifting back in the 90s).

The case that advertising as it currently exists is harmful is a relatively simple one, and bar a confused excursion into a cod-psychological analysis of “intrinsic” and “extrinsic” personal values, it is forcefully and elegantly made here. Most strikingly, Don locates ideological capitalism at the very root of contemporary advertising in the figure of Edward Bernays, nephew of Sigmund Freud and father of the PR industry. Dismayed and inspired by the potency of German propaganda in WW1, Bernays argued that an “invisible government” of capitalists should “manipulate… the masses” through PR in order to promote “the civilising influence of capitalism”.

Countless contemporary advertisements in the UK refigure the wartime slogan “keep calm and carry on” – I pass two on my way to meet Don. They are only the most obvious indication that Bernays’ ‘invisible government’ still maintains a state of martial law. (Bernays also marketed cigarettes as “torches of freedom” for emancipated women – a piece of opportunism he came to regret when his wife died of lung cancer.) 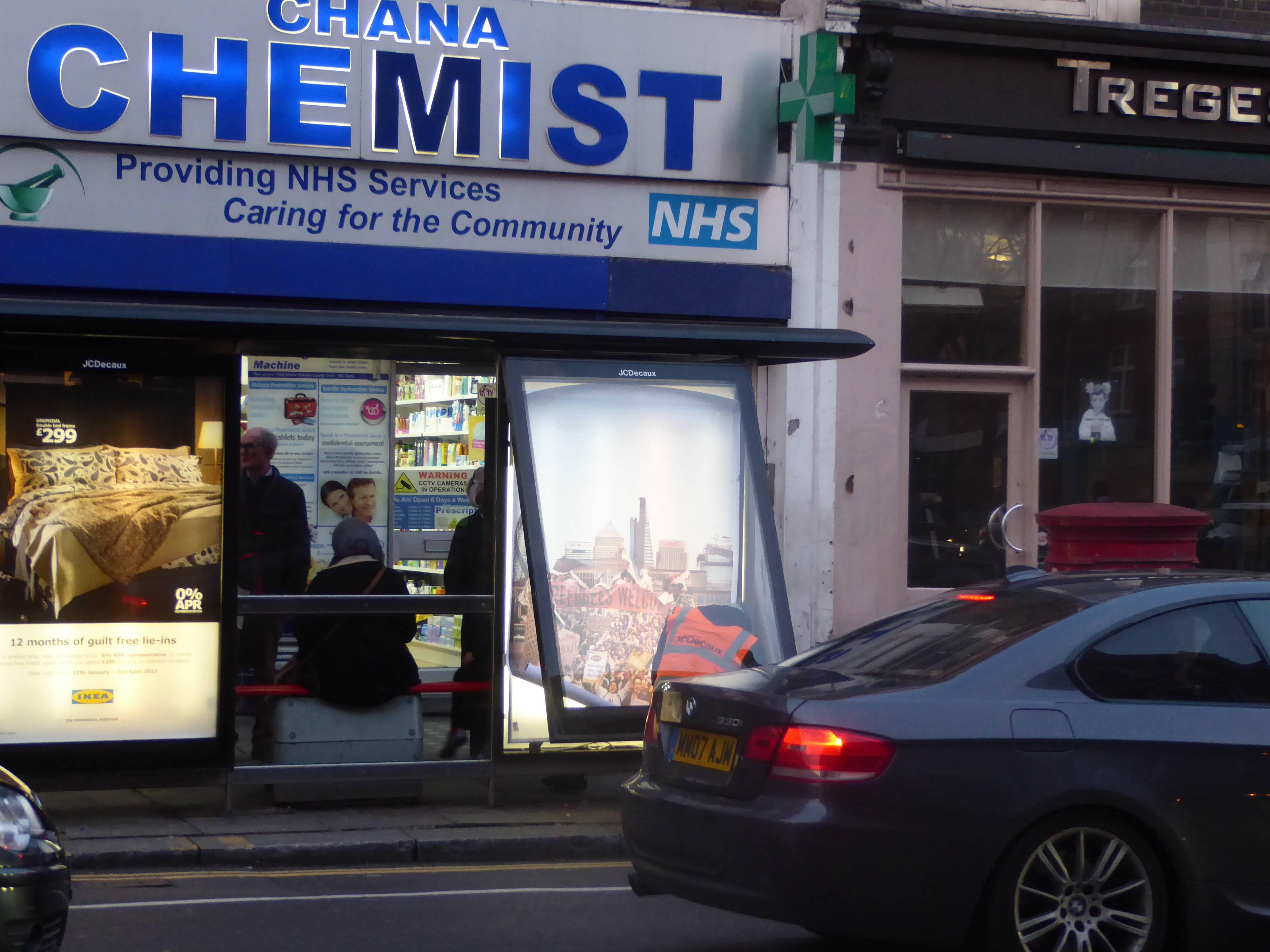 This leads Don to a critical question: are ideological visual displays in public spaces inherently harmful, or are they harmful because they are controlled by profit-making companies who use them to extract value from consumers?  Advertising Shits argues for the latter. Though we currently move through visual spaces held in “monopoly… by private interests… it’s not that propaganda, public relations [or] advertisements are inherently evil”. This at first seems to contradict both the book’s pugnacious title, and the recurrent image of “advertisement as a form of pollution,” by definition toxic and harmful.

But unlike a brattishly linear commercial, Advertising Shits comes naturally to self-criticism. To briefly take another example, adverts do not always present a smooth cocoon of consumerist bliss to those marginalised by capitalist hegemony. The African-American protagonist of James Baldwin’s Previous Condition perceives the “unreal men and pink-cheeked women” pictured in subway adverts as contiguous with the “fleshy masks” of the white passengers who shirk away from him in fear. And Don rightly notes that a new “monopoly on public space”, established by artist-activists, could replicate the exclusionary nature of the aesthetic space currently considered “public”.

The question of advertising’s inherent evil, meanwhile, becomes horribly apparent on the street. On the afternoon I meet Don, a terrorist kills five people in Westminster. The posters being pasted over torn-down ads were provided by artists for a global ad-hack campaign called #SubvertTheCity, and one – created by Austrian artist Oliver Ressler – shows a burning Union Jack flag. Is it a mistake to post up such a crude artwork in such a charged political climate? Fuck it, the brandalists decide, let’s do it anyway. Wrestling up the hardened Plexiglass shell of the bus-stop ad, Don seems a high-vis scarab beetle, trapped below poly-methyl methacrylate by some gargantuan entomologist. We laugh, and saunter off.

It is a mistake. “Sick!” the right-wing British tabloids howl, in articles shared thousands of times. “Vile!” A police investigation is launched. Fascist street gangs are outraged.  Judging by the below-the-line comments – “dread my children's future!”, “They are everywhere,” “it’s beginning” – the artwork has entrenched the imperial persecution fantasy it intended to satirise.

The blame for this does not lie with the subvertisers. Necessarily simplified to suit a public fed a junk diet of slogans and immediate images, Ressler's anti-imperialist message is distorted into grounds for a police investigation into a racial hate crime – distorted by a public themselves set on edge by omnipresent police adverts urging vigilance, paranoia, fear. 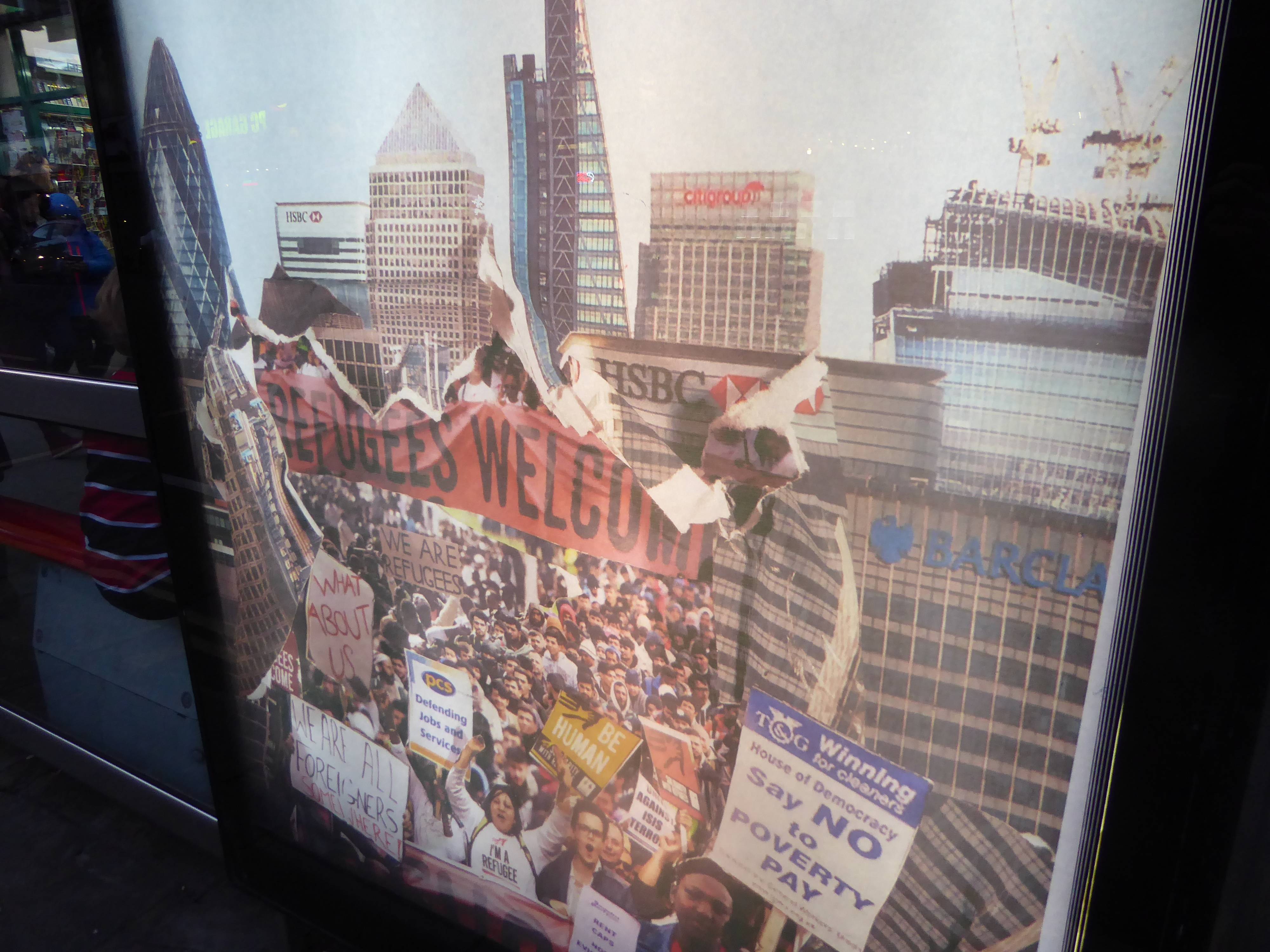 The capitalist ideology so long suffused through advertisement has warped its form, as this form dialectically shapes its content to become more extreme, more provocative. The book's title is another example: what Don is really arguing is that Advertising As It Exists Under Capitalism Shits In Your Head, but that slogan is rather less marketable.

Advertising Shits is not a work of art criticism. It addresses these difficulties in its provision of hands-on “Strategies for Resistance”, not the theory it sketches. As he describes cut-price cut-and-sticks, easily carried out by “two blokes in a van”, a contribution from London based subvertiser Dr. D states that points are awarded “for style”. The ludic spirit of successful ad hacks is bound up with the very act of hacking, of doing it yourself – they must be obviously and explicitly vandalism.

People seem outraged by this DIY mentality. A comment on the Daily Mail burning flag article reads: “They need to wake up and live in the real world...our world,” and Don relates similar opprobrium from members of the public in Advertising Shits. In Paradise Lost, Lucifer says: “The mind is its own place, and in itself can make a Heaven of Hell, a Hell of Heaven.” But many incensed citizens insist we accept the Hell we are thrust into. Our minds may be our own, but our fields of vision are not.

In tacit answer to this public ill-will, Don ends Advertising Shits with case studies emphasising “the vigour with which [subvertising's] various proponents attempt to spread the form.”  His book is a tool, as much as the keys for cracking open bus adverts advertised in its centrefold. Delivered alongside IKEAesque diagrams of effective vandalism, this message is less an attempt to reach beyond the activist/artist coterie than an invitation into it – particularly for those marginalised groups aesthetically excluded from the contemporary visual realm.

Another of the ads we tear down offers a mattress on credit: “12 months of guilt-free lie-ins.” Like Advertising Shits, it promises temporary release from capitalist hegemony. In a stifling political context in which “only the profitable seems imaginable” and provocative artworks are subsumed into a hysterical social consensus, will acts of brandalist subversion inevitably be smothered, as the lucky new mattress-owner will inevitably be swarmed by creditors within the year? Or are these acts of visual resistance bold enough and bright enough to cast hegemony aside, and make a heaven of hell? Advertising Shits does not answer these questions directly. Instead, it hands its readers the skeleton keys to the city.

Advertising Shit's In Your Head is out now via Dog Section Press, as is Subvertising. Get a copy of either from http://dogsection.bigcartel.com/

The DJ and producer's debut novel is inspired by UK music and club culture.