“There's a small amount of coke here and I don’t want to put you on hold,” says Courtney Love, chatting to one of her celebrity pals on the phone. Does her pal mind if she does it while they’re nattering?

The next thing you know, there’s the sound of the grande dame of grunge having a snort, her quick nose-up punctuating her conversation with writer JT Leroy. But things get weirder. Yes, it is the Hole singer, sometime actress and pretty well-documented drug-user bang on the sniff; yet JT Leroy is not everything the young upstart writer seems.

Love’s coke chat is one of the highlights of Author: The JT Leroy Story, the fascinating documentary arriving in cinemas on Friday July 29.
And even weirder is the fact that this isn’t even the most shocking element in Jeff Feuerzeig’s film.

It charts the literary sensation of the century thus far, the tale of how a writer appeared form nowhere, with his first two books, gritty tales of life growing up among hookers, junkies and lowlifes, becoming bona fide bestsellers. The reclusive writer was feted by journalists and celebrities, quickly accruing a retinue of famous pals and hangers-on.

But as his fame grew, so questions were asked and eventually JT Leroy was exposed as 30-something Laura Albert. A supporting cast of characters, including Albert’s sister in law Savannah Knoop, who “played” Leroy in public and Albert herself, who took on the role of manager and confidante Speedie (complete with a Cockernee accent) were also in on the wheeze.

Feuerzeig’s film gets the story from Albert herself and associated characters.

“It’s the most most complex story I’ve ever tackled,” says the director, whose previous outings include the likes of The Devil And Daniel Johnson, another epic tale about a troubled character. “It took two years to unravel it, present it. It was a big undertaking, there was a massive amount of material. It was endless.”

Feuerzeig got in touch with the author after the story broke. 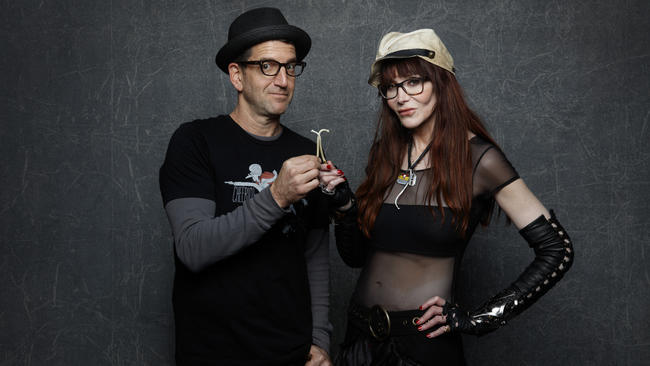 “I had no idea about the story when it broke as this big literary scandal,” he says. “I’d never read the books, but I read about this and it was fascinating."

“I realised that Laura Albert had not told her story, I wanted to hear that story, I felt there was more to that, this person not been heard.”

He sent a copy of The Devil And Daniel Johnson and, brought together by a love of music and Johnson, she agreed.

“The [Daniel Johnson film] deals vividly with the intersection of madness and creativity. She saw the film and loved it, she decided to go down the road with me and share that story. She came from punk rock, she was obsessed with [Northern Irish punks] Stiff Little Fingers. She still has all her buttons, Minor Threat and so on, that was a big part of her identity. I didn’t know that going in, but I can really relate to that punk rock salvation. I’d saved myself too, I was 13, in suburban New Jersey when God Save The Queen came out. That was the dividing line in the sand. And then The Ramones became my obsession.”

As Feuerzeig notes, during Albert’s punk years, her nascent identity and personality problems were becoming clearly visible, with her sister often taking over her persona at US punk gigs. “She was hiding behind someone else,” as he notes.

She gave him access to her vast archives, as Feuerzeig explains: “What I came to learn is this was a subject who documented everything. She gave me her whole archive. Super 8, video tapes, tapes [of phone calls], every childhood notebook… Everything was saved. Daniel Johnson did the same. For me to have that material, it helped creating a more immersive experience.”

Which is where the Courtney Love phone call came in – the calls with celebrities and famous pals (some of whom were slighted when her real identity was revealed), in her different characters including Speedie and Leroy) form much of its narrative. Many of those involved, perhaps after being duped (Asia Argento, who directed a film adaptation of The Heart Is Deceitful Among All Things, was famously burned and said her old man Dario couldn’t have come up with a tale like this).

“When you do a project like this, you often don’t know what it’s going to be like, it’s a journey you go on. It took me two years to excavate, then I decided to put her in front of her fiction. It was a big idea that helped shape the film aesthetically. I love subjective films, things like (Hollywood super-producer Robert Evans doc The Kid Stays In The Picture) we don’t see enough of them. I admire those films. I thought we could add one to that category.”

It helps that Albert and her characters are born raconteurs.

“I felt Laura was a good really good storyteller,” he adds. “And we were given multiple characters, we were getting JT Leroy and Speedie, who’s British. It’s a three act narrative journey and you’re not being told what to thin, there’s no moralising.”

Moralising or not, the viewer is left to make up their own mind as to what Albert is, what the story represents and whether she set out to dupe people or not.

And of course there are highlights – Bono offering pearls of wisdom to a made-up character is as good as it gets, as is the Love line.
Speaking of which, what did the Hole singer think of it all? “Courtney Love gave permission for her coke snort,” concludes Feuerzeig. “She was not upset when JT was expose, she wanted her to go on Oprah. She’s as punk rock as it gets.”