Capture The Flag: The 20th Anniversary Of Hong Kong’s Handover

A documentation on the celebrations and protests surrounding the 20th anniversary of the formation of the Hong Kong SAR.

Capture The Flag: The 20th Anniversary Of Hong Kong’s Handover

A documentation on the celebrations and protests surrounding the 20th anniversary of the formation of the Hong Kong SAR.

Hiking through the trails of Shek O Country Park, you’d think you were miles from any sign of life. At the bottom lies Big Wave Bay, a sleepy, laid back spot that’s considered a hit with local windsurfers. A small spattering of shops line the road leading to the bay, selling all manner of provisions, alongside the odd café littered with white garden chairs. A few houses line the paths diverging from the road, becoming ever more sparse as they reach up into the hillside. You’d be easily mistaken in thinking this was just any part of South East Asia, but following the trail its full way, about a kilometre and a half to the top, a seemingly endless uphill struggle against countless mosquitos and thick vegetation, leads to a clearing. Over the other side lies a vast cemetery, rows of graves clinging to the topography of the descending hillside, turning it grey. Scant details and photographs of the deceased are etched into the marble gravestones, but cast your eyes beyond that and you get another, different window into the lives of thousands. As soon as the hill ends, the city's multitude of high rises begin, and although Chai Wan sits at the far eastern end of Hong Kong MTR’s Island Line, it’s no less dense than at any other point along the route.

Hong Kong’s concentrated, and it’s a contradiction. Across an extremely small habitable area lies a sprawling metropolis, one of the world’s most dense. Competition for space is rife, and the city readily climbs upwards, utilising vertical space as much as it does horizontal. When it runs out, the city carves out the mountainsides to reclaim land from the sea. It’s a picture of chaos, yet it’s somehow highly functional. Space comes at a huge premium, yet the city is fuelled by shopping, an endless need to consume. It’s unbearably humid, yet every bit of indoor space ends up refrigerated to within an inch of its life. The city enjoys the excesses of wealth and luxury, designer boutiques constantly in the periphery, yet the driving force behind the city’s waste disposal comes from the informal economy of the poor and the elderly collecting waste on carts for resale. Inequality is rife and, unsurprisingly, it’s ranked the least affordable city in the world in terms of its housing market. It enjoys more political freedoms than Mainland China, operating under a “one country, two systems” formula but, in the years following the handover, this increasingly looks to be at risk.

The city’s history is a turbulent one, and it seems at an unprecedented point. Recently, Hong Kong celebrated the 20th anniversary of the formation of the Special Administrative Republic (SAR), where power was handed over from Britain to China in 1997, following completion of the 99-year lease of the New Territories from the ailing Qing Dynasty. I'd read that this year's July 1 democracy march wasn't 'just another protest', so despite being merely a visitor, I decided to spend the day exploring how the city was coming together, or dividing, over the 20th anniversary of the SAR. 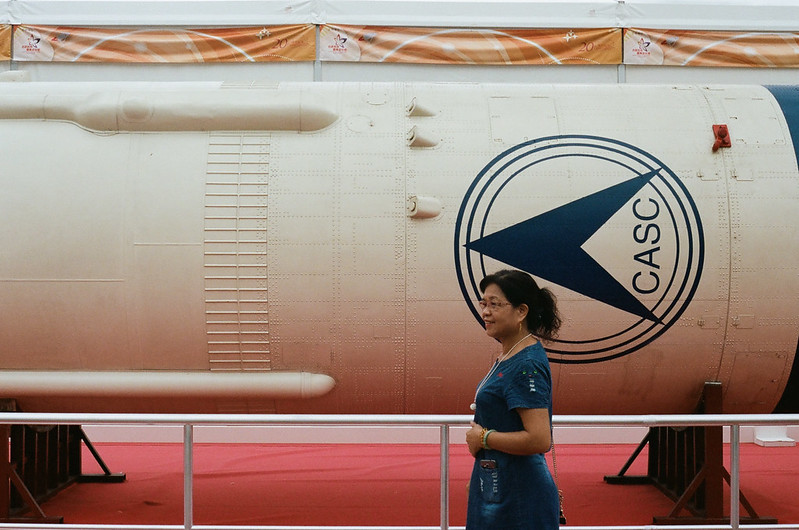 Victoria Park sits on the north side of Hong Kong Island, to the east of the Central district, an unfamiliar respite from the city's unrelentingly density. It was early afternoon on the 1st of July. The temperature hovered comfortably around 30°C, and the humidity was ever-present. Groups of Filipino and Indonesian domestic workers sat scattered along the park’s paths on blankets, eating and socialising, utilising the day off that a public holiday in Hong Kong brings. Pockets of police stood interspersed, presiding over the park’s events. Despite their heavy presence, the atmosphere seemed relaxed. Situated on the soccer pitches to the south of the park were an array of white tents, an expo showcasing a number of items from China’s space programme, including a replica of the Tianzhou 1 unmanned cargo spacecraft, one of China’s newest, and the Long March 1 rocket, one of China’s oldest. It was immersive, with each tent providing a range of interactive exhibits that kept young and old alike entertained. Families wondered around the site gaping and posing for photos, but all of this seemed a stark contrast from the mass organisation happening in the sector of the park adjacent. One could reasonably question the placement of the expo, but all of this seemed irrelevant to those out to get a photo or two in front of an array of rockets. 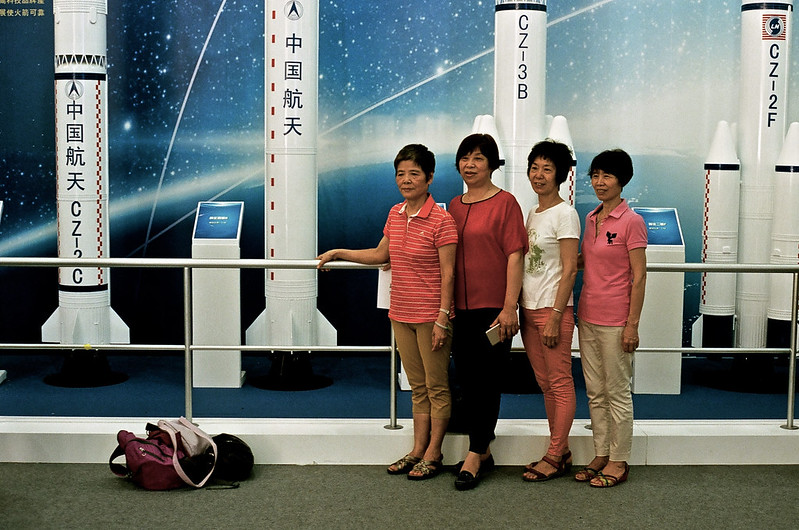 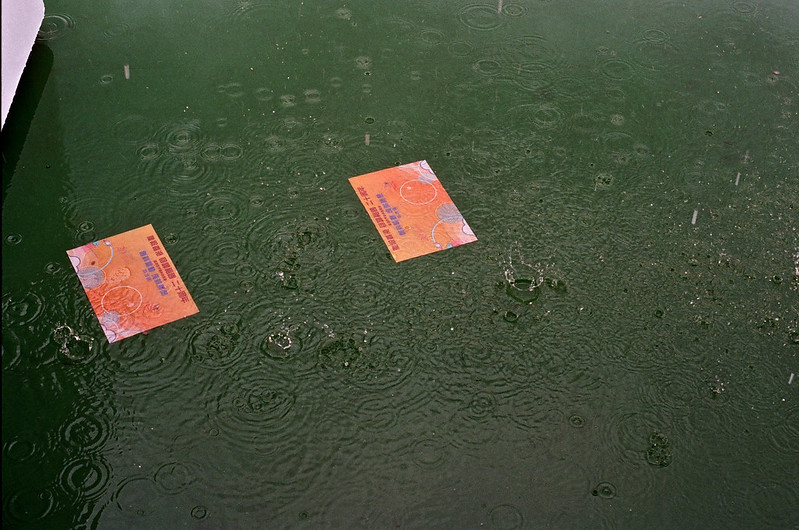 Traditionally July 1st marks an annual outing for the public to vent in the open on a wide variety of social and political issues, and this year was no different. Despite the odd intense burst of rain, typical of Hong Kong, the sun was beating down on the field that formed much of the west side of the park, upon which stood thousands of protestors waiting to march across the city, to the government headquarters in the Central district. With the significance of the 20th anniversary and the proliferation of the Umbrella Movement in recent years led by Joshua Wong, who was arrested in the run up to the arrival of the Chinese premier just days earlier, the city seemed at a fork in the road. The death of Nobel Peace Prize winning dissident Liu Xiaobo in the days following the formal anniversary only served to add to this sense. The shift towards Beijing has led some to believe Hong Kong is ever closer to becoming “just another Chinese city”, despite the "one country, two systems" arrangement set to expire in 2047, whilst Carrie Lam, Hong Kong’s recently elected Chief Executive, looks to pass an anti-subversion bill, which could see the end of the mass protests within her first term. It’s a shift in which not everybody wants to participate. 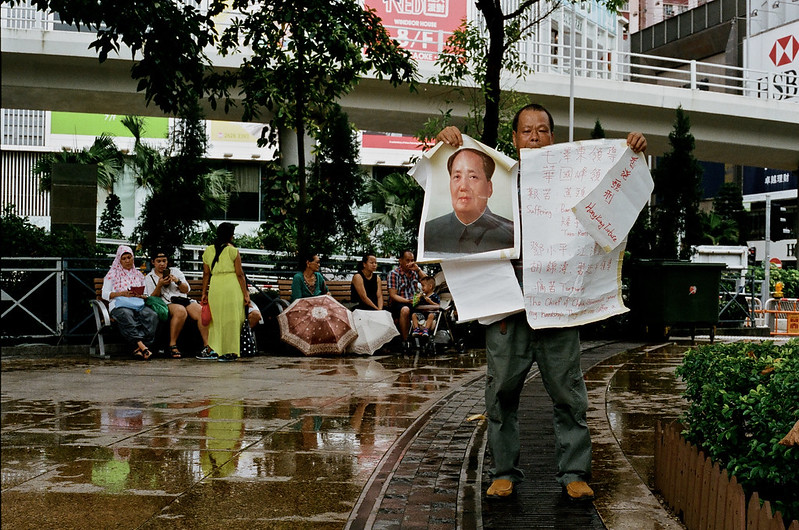 By the park’s water fountain stood a lone protestor, shouting whilst holding signs alluding to suffering and torture at the hands of the Chinese government, along with a large portrait of Mao. His shouting appeared to be directed in part at a pro-unity group nearby, and in part at anyone within earshot, yet nobody seemed particularly perturbed despite his rage. The man beckoned to have his photo taken by anyone holding a camera, seemingly eager to get his story out to the world. Moving towards the central field, Falun Dafa advocates could be seen standing to one side in a marching band formation, stretching amongst their instruments and banners. Hundreds if not thousands of protestors lined up in an orderly manner waiting for the protest to begin, with many chanting to the shouts blared from numerous megaphones in the crowd. Many protestors flew the Hong Kong flag and, amongst the sea of white orchid on red, a smattering of British, Taiwanese, and old colonial era flags could be seen. 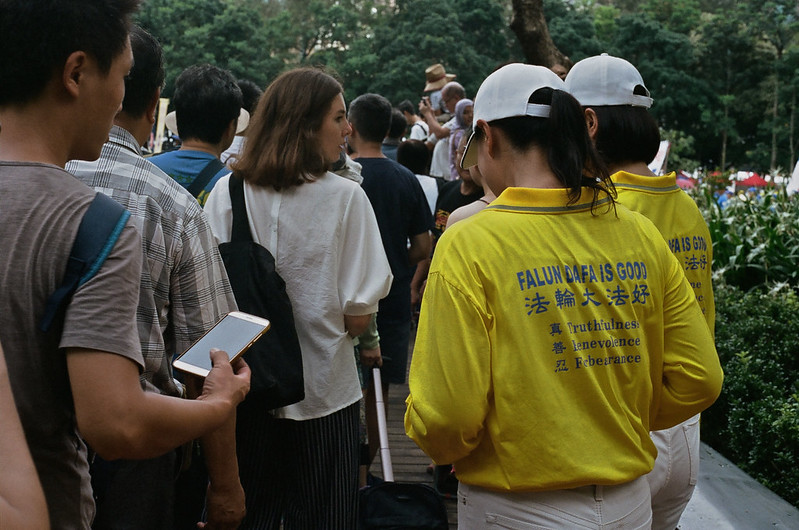 The protest arched out of the park towards Hennessy Road, one of the city’s main East-West thoroughfares. Whilst this year’s turnout ended up lower than expected, the stream of protestors making their way along the route remained endless. Many carried umbrellas, symbolic of the pro-democracy political movement created spontaneously during mass protests in the latter months of 2014. Many carried signs beautifully adorned in calligraphic script, with one woman walking alone holding a large grey cloth, a banner addressing Xi Jinping, asking him to define the difference between Hong Kong and mainland China, to realise there is actually a difference [between the two], and to accept the Hong Kong people. 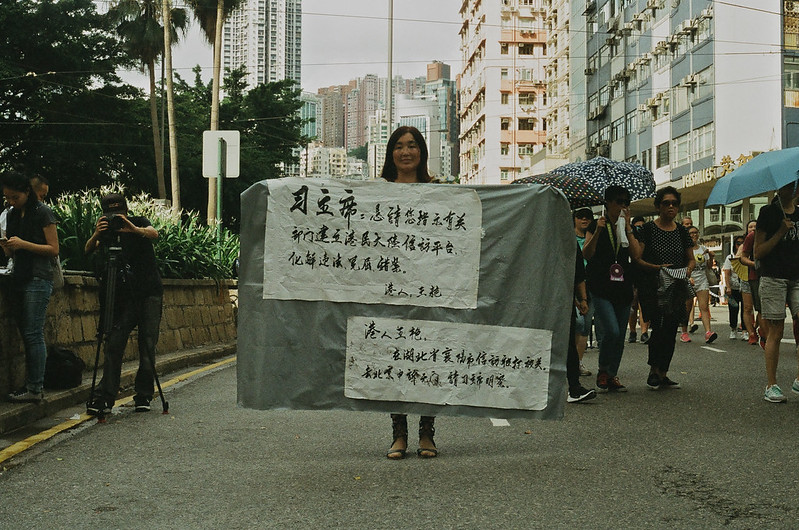 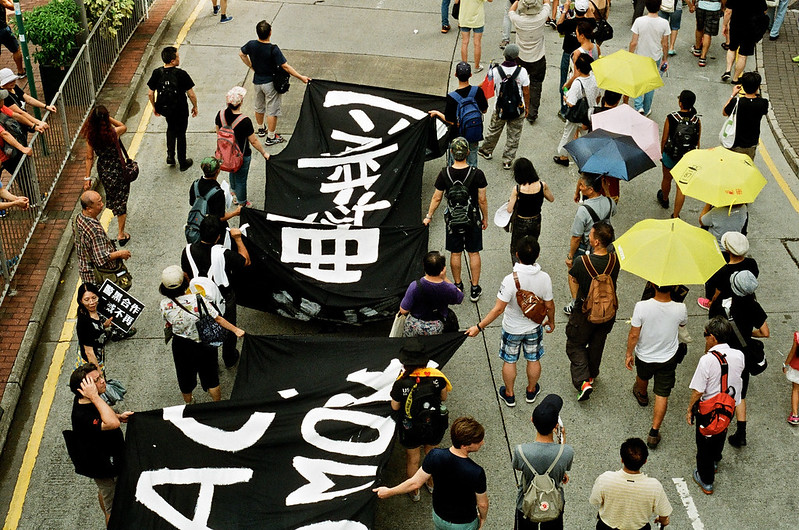 Further down the protest route a man stood on a ladder cheerily greeting protestors, shouting phrases through a megaphone. The moving crowd chanted responses, whilst nearby a woman crouched by the pavement, painting strips of PVC banner. “They don’t believe what we say”, “Only in our dreams” and other messages hitting out at corruption and greed tarred the white sheets. Signs were carried along the route scrawled with satirical Chinese phrases; in particular many spelling out in English [democracy] delay no more, alongside the somewhat homophonous Cantonese phrase Diu Lei Lo Mo, meaning “fuck your mother”. 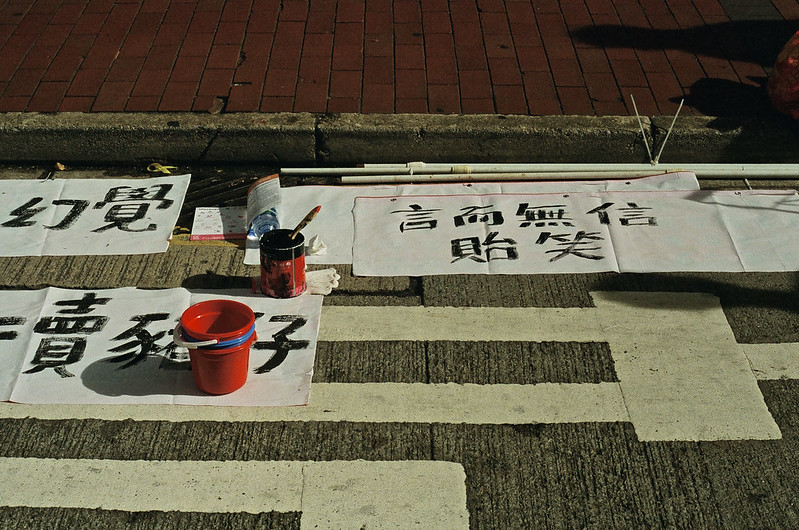 What was striking about the protest was how calm it was, in stark contrast to the umbrella movement demonstrations, which were highly aggravated and resulted in numerous injuries and arrests. Along the route, I met Kenneth, a 29-year-old social worker, who explained the relaxed atmosphere. “Hong Kong protests as a group, it’s just the style here… People just come out and walk.” We spend a while discussing this mentality, and how the protesting has much less of an individualistic focus, and much less shouting compared to the UK. Endless streams of people keep marching along calmly, diverse in age, gender, and social status. It wasn't entirely without disruption though, with some reports of police brutality trickling in as the afternoon progressed. 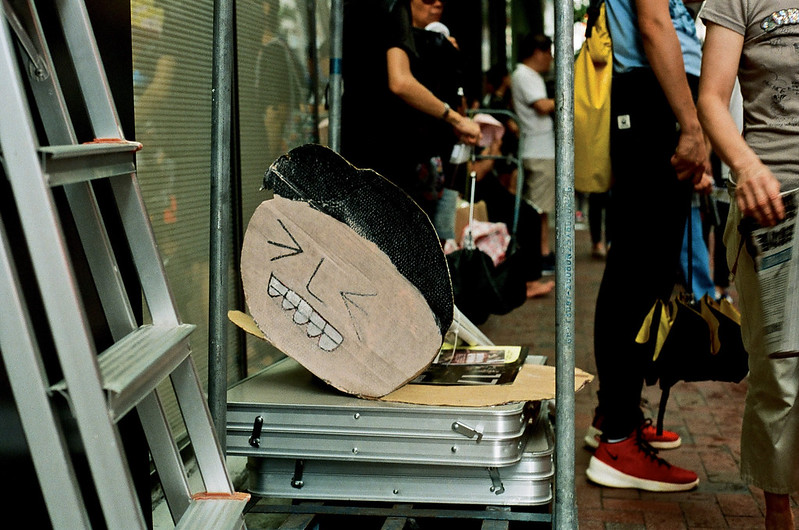 As the protest progressed down Hennessy Road, increasing numbers of stalls lined the route, with endless leaflets, banners, materials and chants accompanying the fight for a particular cause. It became loud and somewhat more chaotic. Community engagement causes, the League of Social Democrats and environmental groups, amongst others, all fought for airtime with a transient, fluid crowd of thousands. As the march rounded off towards the Central district, bad weather hampered a planned public rally outside the government headquarters. In true Hong Kong fashion, people either braved a soaking with distinct indifference or simply sought temporary refuge wherever they could find a dry spot, staring up at the sky in search of an end to the downpour. Upon reaching the end of the protest route, the crowds quickly dispersed. 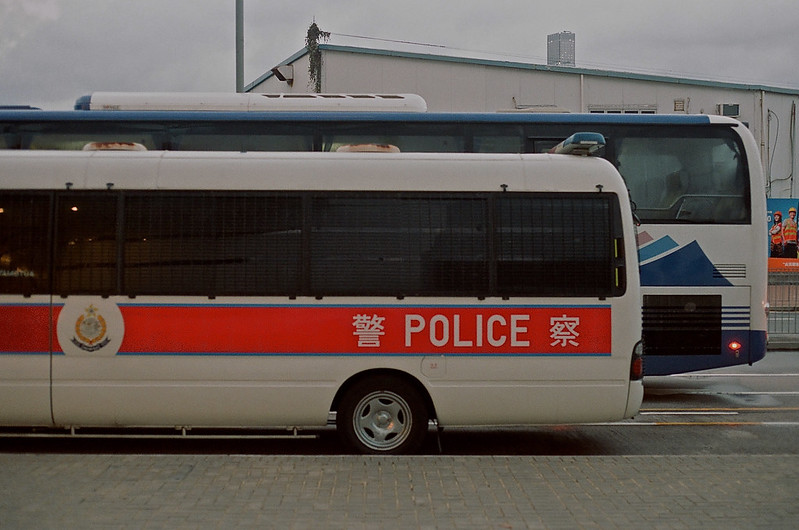 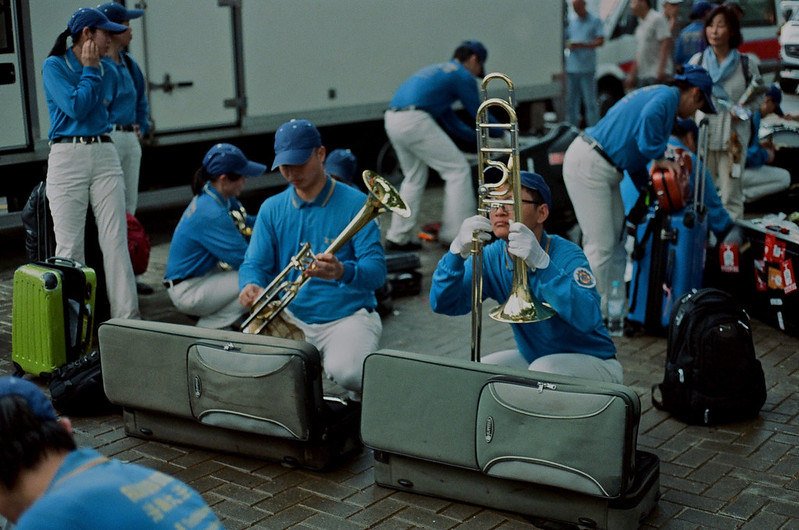 As twilight approached road maintenance crews swept, collected cones, and got the city back to its normal state once again. Police vehicles headed back to the stations they came from, and the Falun Dafa marching band packed up their instruments by the roadside, the remnants of the day’s protest trickling away. At this point it seemed like everybody in the city was moving to converge on the harbour front, on both Hong Kong Island and Kowloon sides, for the city’s annual firework display, a 23-minute pro-Beijing spectacular. The MTR and any streets even remotely pointing towards the waterfront were packed out. 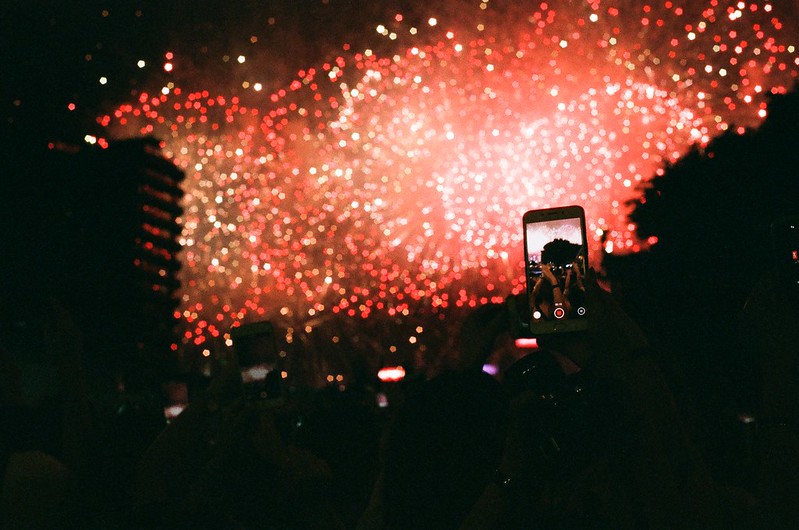 At this point, any notion of protest or tension had faded, and people of all ages came together to watch the spectacle, hundreds of phones pointed upwards illuminating the crowd as the pyrotechnics etched out the Chinese characters for Hong Kong and China, the number 20 and a whole host of other patterns and shapes. The crowd marvelled, with collective gasps accompanying every single explosion in the sky above. It all felt a bit bittersweet; what was apparent throughout the day was that there is a clear generational divide when it comes to the China issue. At the 20-year mark, Hong Kong is still trying to maintain its own, distinct voice, but as the city moves further away from the past, and as Beijing increases its influence over the SAR, by the time the next milestone anniversary arrives there may not be the chance.