Ramblers, Time’s Arrow, Genetic Gentrification And Why Nemanja Matic May Be Omnipotent Time. Time, longevity and all things temporal. Those are the things that have been piquing my interest this week. Now the traditional mode of temporality is defined in the OED as ‘a linear procession of past, present, future.’ However, who is to say that this commonly acknowledged formula is the same for everyone? After all, we’re told in school and church from the very youngest age that ‘God created the heaven and the Earth and all things therein in 7 days,’ and still had time to kick back and have a fag and a roast on the 7th day, innit. Now by any measure that’s some going. We all know that the celestial lad’s got a good engine on him, like a kind of celestial Nemanja Matic, an omnipotent midfield dynamo all full of hustle, box to box from the first to last whistle and all that, but 7 days? What’s to say that one of God’s days wasn’t a hundred, a thousand or even a million of our years? Relatively speaking the increments of measuring time have been argued over by every sect and religion since the beginning of well, time!

Which brings me untidily to my point. The particular facet of time and its measurement I’ve suddenly found rammed in my face is that of genealogy and heritage. The amount of websites and magazine advertising now taken up with people who profess to be able to trace back your ancestry. Why do they do it? And more importantly, why do so many people come to the North in search of their ancestors who are, to them, no more than names? It seems like the North East of England – in particular Northumberland – is second only to Scotland for people tracing their humble working class routes. It’s as though we were the master default switch on every genealogist’s computer.

They come in droves, always middle class, dressed in brand new yellow cagoules and expensive walking boots to pore over all-but-illegible copper plate and parish registers with scant regard for the damage inflicted on their eyes. They scrape the lichen from headstones in Alnwick. They walk beside tiny streams in Morpeth where someone with rickets who, two centuries ago, happened to share 100% of their mother’s surname and 1.575 of their DNA may, just may have walked in inadequate footwear. What is wrong with them? What is the current obsession with ‘Roots’? You could say it’s a lot to do with the Catalans and Basques. They, like Northerners have always been people who’s main contribution has been human export. Brain, muscle and sinew for hire. From the Newcastle and Durham miners who selflessly went to fight Franco’s annexing of Barcelona to Northern women chucking themselves under the Queen’s horse, spoiling Royal Ascot in search of the vote. 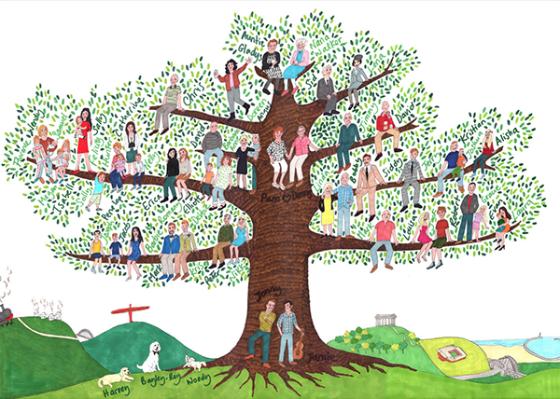 There has always seemed to be a Northerner of some gender at the front of the mob to throw the first brick. Some may say that this is a classic example of Northern ignorance and belligerence but I’d rather mark it down as a steadfast commitment to the cause. There’s always been a culture of strong left wing political identity in the North as well as the more publicised intolerance and racism we’re so often accused of. But this strong identity and working ethic displayed in our grandparents and their parents has always been the main driving force for Northern people leave here in search of a bigger stage and of a living wage and the chance of material improvement. That’s why we have these middle class, Sunday afternoon family tree enthusiasts bothering our beer gardens of a weekend. It’s largely a matter of economical survival – their ancestors made a hard-nosed decision to leave and their descendants make the soft-nosed decision to come back and claim some Northern heritage by proxy. The stuff in their veins is blood group ‘Wey-aye’ and when they bleed they bleed a coal and Brown Ale mix.

The internet has been a boom for both pornography and genealogists, unsurprisingly as the fundamental principle for both is the same, incremental. There must always be more. More participants, more contortion, more grandparents, more second cousins. It’s not enough to trace back two or three generations. They need to find the rusty pick axe that their great grandfather 14 times removed used to cut the first lump of coal out of Durham’s first coal face. All the while telling themselves the lie of the ‘good old days’.

Now, as corrupt as the Northern vernacular has become, we have the good fortune to speak a form of the English language which, unlike Arabic or Sicilian, has a future tense. Why not concentrate on the regeneration in the area, of the quayside and Ouesburn in Newcastle, the award winning Baltic Art Gallery, the Sage Buildings or the Millennium Bridge rather than the rose-tinted, half-remembered, tiresome tales of young northern scamps and the elaborate comic ruses created to prevent their angry mothers from discovering their chronic truancy. These to me are far less interesting. Yet still people insist on concentrating on coo-ing over scratchy sepia-toned pictures of kids in flat caps and tatty knee length trousers holding onto ropes attached to malnourished pit ponies. Remember, there is another North East – vital, living, untarnished places with energy and a greater delight. Places with no quasi-Victorian ancestral claim on us. Where the yolk of a readymade collective history is absent. One that we can talk of in the future perfect rather than the past historic. Places where we can choose to go towards rather than come from. Places with potential, where anything is possible, where everything is waiting to happen.

That’s all for now. But then again. Anyone know how long now is? 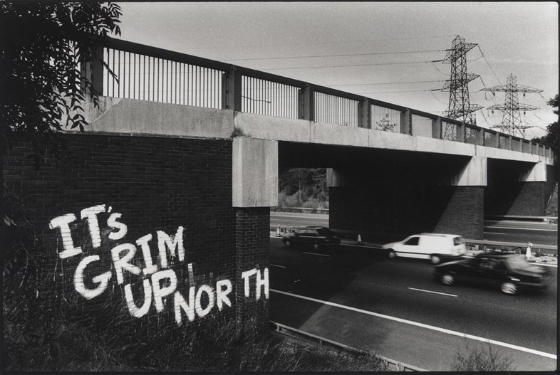