Bristol-based DJ and producer Felix Dickinson has been around the block a few times. First cutting his teeth around three decades ago playing free parties and illegal raves, he's since gone on to hold long-standing residencies at Glastonbury's Block 9, Houghton, Love International and Japan's Lifeforce parties, alongside Nick The Record.

It was in these early days while living in Brighton that he launched his Ugly Music imprint, which ceased towards the end of the 90s but gave way to Cynic, the label that started life as a platform for his own productions. Since then, under various aliases and guises, Felix has graced a lengthy list of labels including Futureboogie, DFA, Eskimo, Rush Hour and Golf Channel.

His Ransom Note mix moves through the motions, from slow building rhythms to synth-driven electronics and hypnotic house jams stitched together for the dance floor...

Hi, I’m Felix Dickinson. Currently in Bristol. I'm a picker, I'm a grinner, I'm a lover and I'm a winner (I play my music in the sun).

I thought this question was 'what does this mix look like', and now that I've done the image I realise I misread the question! I can't be bothered to go do it again, so here's the answer to my question not yours (sorry) 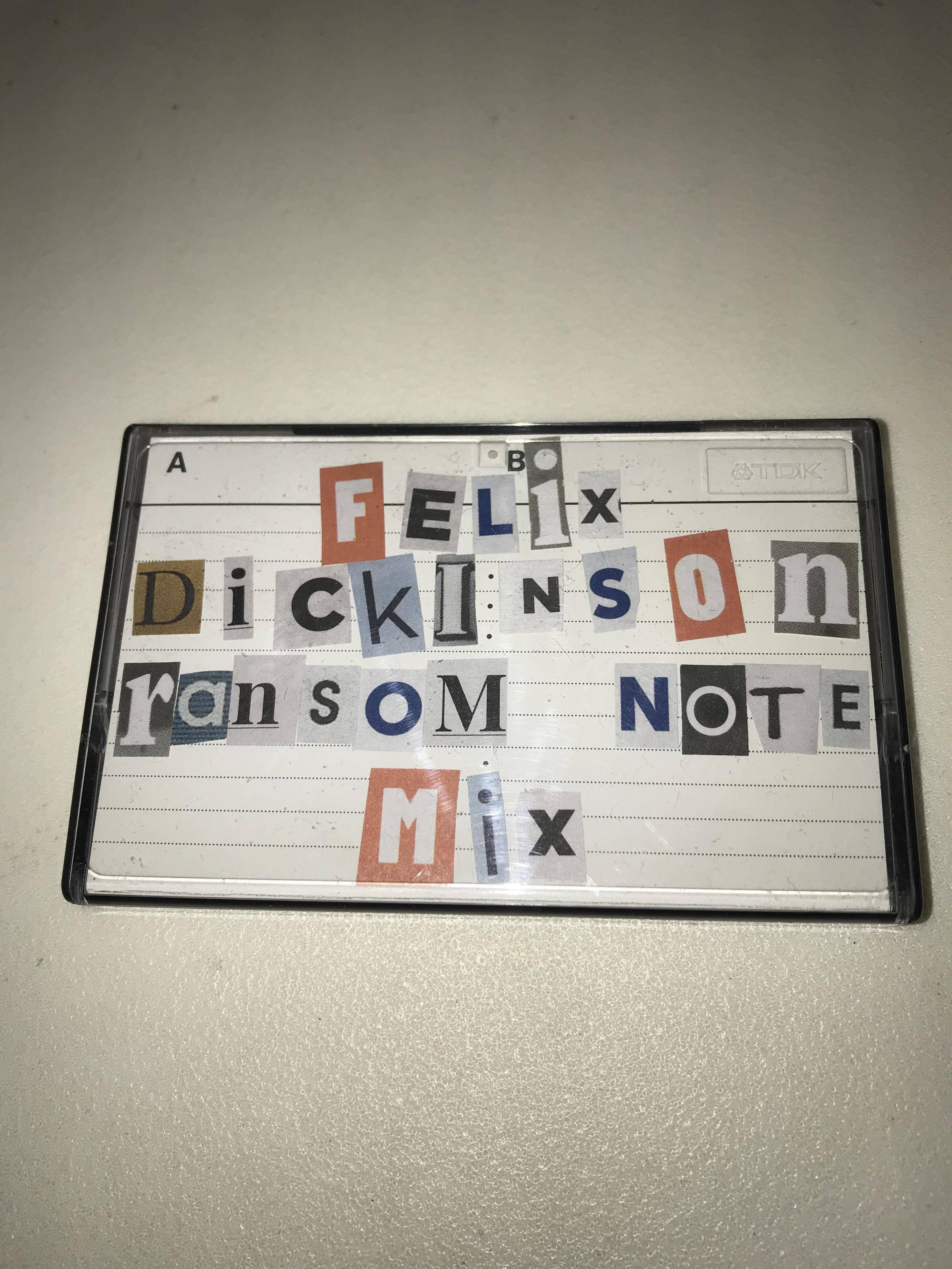 Recorded in my office/man cave at home.

It's a dancey mix, so I reckon somewhere dark where you can turn it up loud.

Whatever you want (maybe face masks).

I much prefer playing records when there's a dance floor to interact with. Preferably open minded people who have come to dance. So a small club/party with (high) people, in a far flung corner of the world would be ideal.

Probably the one I finish with.

Tough one, I don't really listen to recorded mixes as much as I should do.

I should probably say someone like Ron Hardy or Francis Grasso, just because I'd like to hear them and get to hang with them, but not sure how well the B2B would work. I'm not really up for doing B2B unless I know someone really well, so going for a historical figure would probably make the time in the booth a bit tense. I generally just like doing it with my mates, someone who's taste/records I know quite well, so there's an understanding that we're pulling in the same direction. I've had good sessions in the past with the Idjuts, Nick the Record, Jaime Read and currently doing it with Dave Harvey every now and then.

When I first started getting club gigs it was a big shock with the sound lag etc, so I adjusted my home set up to basically be like the worst club you’d ever play so that nothing was a shock, speakers with blown tweeters or the other side of the room (or in another room as there were two knocked through together). I spoil myself a bit more now, my working booth is a pair 1200's and a pair of CDJ2000's, an Alpha 9000 and a Pioneer EFX 1000 all going into a Bryston amp into some Acoustic Energy AE2s.

I'd say the last one, as that's the one that hopefully people will be singing on their way home.

First record I bought was a compilation by Madness called ‘Complete Madness’. I’d saved up to buy my first L.P and went in planning to buy Kings Of The Wild Frontier by Adam and The Ants, but they’d sold out so I bought the Madness L.P. I tend to buy in bulk these days as it's mostly online and I wanna save on postage, the latest haul had a few acid bits from Weapons Of Desire, Borft and the North Remembers and some more chilled bits from Kalahari cult and Four Files.

I'm a believer in the old adage "mixing is for kids", and not something to worry too much about, but then again I am prone to acts of childishness and do love to have a good mix if the records work together. There's a great track by Paolo Dossena called Voices that sounds like it should be great for mixing, it has a strong pounding electronic beat and is really hypnotic, but something always throws me off if when I try and mix it, so it's just one to drop.

Upcoming in the world of Felix Dickinson…

I've done a couple remixes for the Wicked crew in San Francisco that should hit the stores around June time. I've also been chatting with my friend Tony Lee who I used to run the Ugly Music label with about doing a limited selection remastered/remixed tracks from the back catalogue, along with a few other tracks from the old artists that haven't been released yet, and maybe even a few new releases. Getting quite excited about that, not sure when they'll see the light of day, but hopefully later this year.

Then there's some other tracks I've been working on, one with Christophe from Futureboogie and Quinn from Paranoid London that I've been road testing for the last year or so, that hopefully will get a release soon; and another little thing I've done with Dan Idjut that I'm looking forward to testing on a few floors, and given the right response I'll be unleashing that to the public soon.